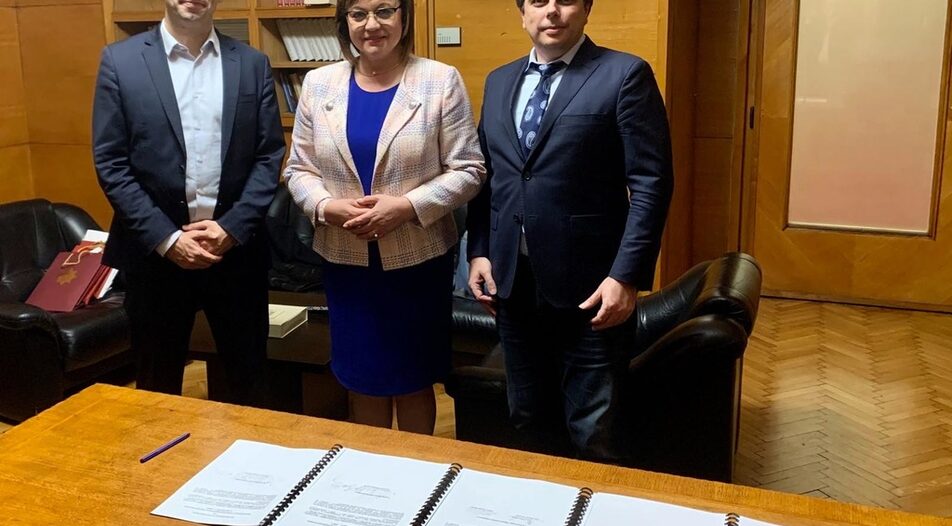 Can the coalition live up to its promises, DIY photovoltaics and good news for "Made in BG" cargo drones

It's almost six months since Kiril Petkov's cabinet assumed office last December, promising a plethora of reforms, detailed in a 100-odd-pages long coalition agreement. Objectives included improving governance, tackling the health crisis and even undertaking major constitutional reform to create new balance within the judiciary and empower it to fight corruption. The ambitious package also came with a roadmap, deadlines and all the rest

Sadly, very little of this has actually materialized. It's true, priorities have obviously changed - Covid-19 and low vaccination rates were relegated to the backburner (at least until the next wave hits, likely in the autumn - as Mr Petkov's own health adviser, Prof Radka Argirova, warned earlier this week), while the war in Ukraine took center stage.

Yet, most governments have faced some form of a crisis, or even several at a time - Borissov's first cabinet had to deal with the effects of the Euro crisis, Oresharski had to deal with Corpbank, street protests and the invasion of Crimea and Donbas, Borissov-2 got through the 2015-2016 refugee crisis etc. Having huge crises in the vicinity, or domestically, is not an excuse of itself, especially for a cabinet led by a party that prides itself on the expertise and professionalism of its members.

Of the promised reforms, only two have entirely, or partially, materialized - the closure of the Specialized Court and prosecution offices, as well as the moves towards finding an alternative gas supplier to Russia. Credit where credit is due.

But, at the same time, domestic reforms beyond the reach of the war, and ones that could have easily been moved forward by Parliament - changes to the Constitution, fixing the anti-corruption agency and law, overhauling the way state administration works - have not progressed an inch. The prospect of a "return of Parliamentarism" after GERB's downfall, promised by MPs from various formations, seems to have been postponed - MPs mostly ratify external conventions and argue with (or defend) members of the cabinet during Q&As. April and May have largely been dominated by the opposition - almost all new proposed legislation has been submitted by GERB, MRF or Vazrazhdane. The members of the parliamentary majority are either unable, or unwilling, to oppose this.

The situation is unprecedented - most of the parties in power now have very limited experience in governing and are indeed facing quite an uphill battle. But their failure to stick to their pre-existing commitments, laid out in depth six months ago, will surely be punished by the people who entrusted the four parties with their votes in November. And the effects could be much worse than some politicians losing their reputation.

Is your highness a liberal or a conservative?

This famous phrase from Aleko Konstantinov's timeless satire "Bay Ganyo" describes this week's biggest political drama perfectly: which European party family would Kiril Petkov's WCC party join? It all started with an entry in POLITICO's daily news digest from Brussels, which claimed that Mr Petkov plans to attend the meeting of the political leaders of the European Parliament group Renew Europe, due on 30 May in Brussels, before the European Council. This was described by the publication as "the strongest sign yet that his "We Continue the Change" party is preparing to join the liberal group at European level".

The only problem? MRF, one of WCC's political opponents, is part of the faction that emerged from the forerunner to Renew Europe, the Alliance of Liberals and Democrats (ALDE) union. Their representatives allegedly held a meeting with Mr Petkov in Sofia, likely in an attempt to broker their support for WCC's bid, but it ended in recriminations - MRF leader Mustafa Kardaya claimed Mr Petkov threatened to "deal with" his party. The scandal turned out to be a storm in a teacup, but the dilemma for WCC remains - should it try to enter Renew Europe and try to "scrape off" MRF from within, or pressure the party family to get rid of the "liberal" Turkish-ethnic, corporatist party beforehand.

N. Macedonia on our mind again

Yes, yes, I know we might be boring you to death with this, but it was a short and uneventful week, after all. So, more threats and ruptures within the ruling coalition because of the N. Macedonia EU veto topic - TISP, showman Slavi Trifonov's populist party, threatened (again) to leave the coalition over rumors that Prime Minister Petkov would use his visit to the Vatican for 24 May (which celebrates the deeds of St Cyril and St Methodius) to announce that Sofia was lifting the veto over Skopje's bid.

Of course, this did not happen, but this propelled WCC members, including Mr Petkov, to call for a national dialogue, including in Parliament and in the Consultative National Security Council at the President's, in the coming weeks, likely in a desperate attempt to show EU partners that Sofia is at least trying to solve the Macedonian Gordian knot. These advances were quickly brushed off by hardliners, including from President Rumen Radev's office, who said all that was supposed to be discussed at the Security Council had already been settled in January.

Also, if you missed this week's political piece "Is Bulgaria the weak link in Europe's fight against Russian disinformation?", check it out here.

Bulgaria's budget deficit exceeds the 3 percent of GDP threshold and current spending, including various anti-crisis measures, contributes significantly to it, the European Commission warned in its latest recommendations for all EU countries, published on Monday. For now, however, the higher spending remains permissible in view of the crises and the country will not enter into an excessive deficit procedure because of the current derogation introduced at the start of the caucasus pandemic. In general, the tone of the recommendations to Sofia is similar to that of the other member states that have realized deficits above the 2021 limit and/or are planning to exceed them in 2022.

Brussels' main criticism of Bulgaria is that it is not controlling its current expenditure growth well enough. It will account for 1.4 percentage points of the deficit (which will itself be 3.4 percent of GDP), with the lion's share due to an increase in pensions (0.6 percent of GDP) and wages (0.3 percent), anti-market measures to mitigate inflation (0.2 percent), as well as spending on refugees from Ukraine (0.1 percent). According to the EC, some of the government measures are not sufficiently targeted, such as the moratorium on household energy prices.

The money that has been dedicated by the Regional Ministry to municipal projects linked to road and water infrastructure earlier this week.

The profit for 2021 (before tax), recorded by the Bulgarian Energy Holding (BEH), the state-owned consolidated company that owns all the national energy producers, including Kozloduy NPP, Maritza East TPP and mines and the National Electric Company, among others. This is a nine-fold increase, compared to 2020. It is expected that, due to the increase in energy prices, 2022 could see the profit margin reach 5 bln BGN.

Also, don't miss our ranking of Bulgaria's financial institutions in terms of stability, profitability and dynamics from Thursday.

On Wednesday, the Bulgarian cargo drone developer Dronamics announced it has become the first drone carrier to obtain the EU's Light Unmanned Aircraft Systems Operator Certificate (LUC) for its Black Swan drones. This allows the firm to fly in all EU member states and perform Beyond Visual Line of Sight (BVLOS) operations.

One of Bulgaria's three major telecoms announced that it is buying 100 percent of Stemo, an IT company founded 31 years ago in Gabrovo, which is one of the largest Bulgarian IT firms. The price of the deal has not yet been announced, but according to sources from the sector it is around 50 million BGN.

The California-based medical tools firm, which manufactures the da Vinci robotic surgical systems and has a turnover of nearly 6 billion USD, will build a factory in Parvomay, Plovdiv region. The company will invest BGN 80 million in the production of 3D endoscopes (mobile cameras), with construction expected to start next year and the plant to be operational in 2025, creating over 100 jobs.

One of the first significant energy reforms this administration is likely to implement is easing procedures for businesses to build solar systems for their own use. The aim of the legal changes is to allow non-household consumers to arrange as quickly as possible for the installation of photovoltaic (PV) panels with a capacity of up to 5 megawatts for their own needs (this is a significant capacity, sufficient for a large enterprise) and thus to stimulate investment in green and cheaper electricity. The bill is expected to reach the plenary of the National Assembly for a vote in early June at the latest, so that its provisions can start to apply in the summer.

Find out about opportunities for your business to finance a PV project for its own use in this week's article from the recently published KInsights Special Issue on the Future of Energy in Bulgaria (which you can read in full here).

The software giant VMware has appointed Bulgaria's Ventsislav Pochekanski as Vice President of R&D. He will lead some of the teams from the company's cybersecurity branch. Mr Pochekanski is the second Bulgarian to hold a senior leadership position at VMware after Diana Stefanova, who is vice president of Regional Development Strategies at VMware.

The Bulgarian deep data analysis company, which raised 750,000 euro from BrightCap VC and Telerik co-founder Boyko Yaramov, is the last one featured in our Tech report. Read more about her story here.

The most optimistic date by which Bulgaria will be able to launch its air ambulance service, consisting of five medivac helicopters, with 120 million euro from the EU Recovery and Resilience plan budget.

It's almost six months since Kiril Petkov's cabinet assumed office last December, promising a plethora of reforms, detailed in a 100-odd-pages long coalition agreement. Objectives included improving governance, tackling the health crisis and even undertaking major constitutional reform to create new balance within the judiciary and empower it to fight corruption. The ambitious package also came with a roadmap, deadlines and all the rest

Sadly, very little of this has actually materialized. It's true, priorities have obviously changed - Covid-19 and low vaccination rates were relegated to the backburner (at least until the next wave hits, likely in the autumn - as Mr Petkov's own health adviser, Prof Radka Argirova, warned earlier this week), while the war in Ukraine took center stage.