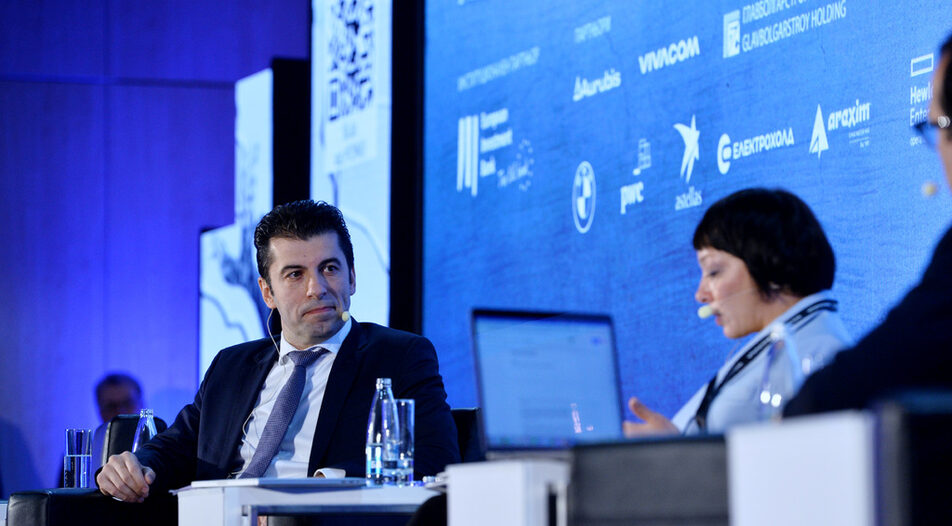 "Bulgarian institutions have been captured and this has happened mostly because of the inactions of the Prosecutor's office. If we manage to fix it, many problems will be sorted out. At the moment we have the Attorney General who is the gatekeeper of everything. We literally have our hands tied." These were Prime Minister Kiril Petkov's words to an audience of Bulgarian businesspeople during his speech at the annual Government meets Business meeting, organized by Capital weekly each year.

Before the meeting, he said that the current gas crisis is another legacy of Russia's war in Ukraine and follows well-planned calculations by Vladimir Putin. "Our fledgling government was caught in a perfect storm. Unfortunately, Putin has long had a strategy - Gazprom controls German gas storage facilities and controls the overall price of gas in Europe," Mr Petkov said.

The Prime Minister also related how US Vice-President Kamala Harris had called him on Monday evening, thanking Bulgaria for its position and support for Ukraine. They had also discussed how corruption in the country has been linked to geopolitics and Russia. "It's the same people who wake up in the morning, thinking about schemes involving Russia, who, on other occasions, undertake schemes that harm the Bulgarian budget," Mr Petkov said, adding that the government's anti-corruption drive is also about cleaning up the influence of foreign countries. Prime Minister Petkov also said that he would discuss Bulgaria's problems with corruption with the head of the European Prosecution, Laura Kovesi, who will come to Bulgaria on Wednesday at his invitation.

Bulgaria completely unprepared for the war

Mr Petkov, discussing the war in Ukraine and its effects on Bulgaria, said that his cabinet had inherited a broken system of defense with cabinet ministers "moving like moonwalkers, trying to fix structures and coordinations that are non-existent".

In terms of the influx of refugees from Ukraine, the picture is similar and the government has managed to realign the system. "This system has never taken in 2,000-3,000 people a day. The previous model was to put refugees in camps, lock them up and process 30 asylum applications a day, and think about what we can do in the interim," he said.

Mr Petkov added that Bulgaria had no plan at all for such an emergency, that there was no system of coordination between different agencies and everything had to start from scratch. There was also nothing in place to counter an increase in radiation levels, a possibility that has been raised at least twice since the start of the war in Ukraine. He said that bomb and radiation shelters in the country had been left "untouched for 30 years" and that outdated gas masks were available only because it would have cost more to dispose of them.

The Prime Minister also explained the cabinet's decision to buy wheat in bulk from the current harvest rather than risk possible radioactive contamination in the next one. He responded to criticism of his cabinet's autarkic approach coming from the agricultural sector by saying: "the market may be free, but my children will not eat radioactive bread".

Mr Petkov also commented that he would not allow his coalition government to break up over BSP's pro-Russian positions. Neither would he open his arms to GERB. "There's no way that we will say, after all these years, 'well we forgive you, forget about all the billions you stole,' it's not going to happen. I will not be the Prime Minister who will give a hand to someone who has stolen from Bulgaria for so many years," Mr Petkov said, adding that his party would also shun the MRF.

From the other members of Mr Petkov's cabinet, the most interesting news came from the Ministers of Regional Development Grozdan Karadjov, Transport Nikolay Sabev and E-Governance Bozhidar Bozhanov.

Mr Karadjov said that, by the end of the year, 6,400 km of second-tier roads in Bulgaria would become part of the toll system, with transiting trucks having to pay an additional fee to use them. "Due to protests and populism, transiting trucks do not pay toll taxes when they use second-rate roads. Naturally, this draws traffic away from first-class roads and creates immense traffic on the second-rate roads, which have not been designed for such heavy usage," Mr Karadjov said.

The other news from the panel on infrastructure and transport, which was also attended by Transport Minister Sabev, is that shipping in the Black Sea is already suffering due to the refusal of insurers to cover vessels after the Russian invasion of Ukraine. Mr Sabev promised that the State Export Insurance Agency will try to cover for businesses fearing the increased risks in the Black Sea area, but also that his institution had been working on finding alternative supply chains for the past three weeks - likely through Greece. He added that a new ferry crossing between Ruse and the Romanian town of Giurgiu across the Danube ought to be launched in June and this would help to ease traffic at the busy border.

E-governance: Cyber-war on the horizon

"Bulgaria is preparing for a larger cyber war while fighting smaller attacks that have led to the blocking of 45,000 Russian IP addresses in connection with successful and unsuccessful attempts to take down state and private Bulgarian platforms in recent months," E-governance Minister Bozhidar Bozhanov said during his intervention.

"Nothing has been done about cyber security in recent years. We are trying to catch up in the space of a few months what has been done in other areas in the state for ten years. When Prime Minister Kiril Petkov says that Bulgaria has no bomb shelters or iodine, this is something people can imagine. When it comes to cybersecurity, it's a little hard for people to imagine the lack of software, of secure servers, of preparedness," Mr Bojanov said. He added that introducing e-identification remains a top priority for his ministry.

A brave new world, as seen by Ivan Krastev

The world has fundamentally changed with the war in Ukraine, says political scientist Ivan Krastev, head of the Centre for Liberal Strategies and researcher at the Institute for Humanities and Social Sciences in Vienna. "We are talking about a very different Europe economically. Even if there is a ceasefire, economic sanctions on Russia will continue as long as Putin is president," Mr Krastev told participants at the meeting. He also pointed out that the real negotiations to stop the war are taking place in two places. "While Russians and Ukrainians are negotiating, Americans and Chinese are negotiating whether there will be Chinese financial and military support for Russia in Rome," he said.

Mr Krastev pointed out the importance of resilience in societies, citing (unfavorably) Bulgaria where levels of distrust towards the state, and wider society, are extremely high. "This distrust in times of war can be instrumentalized. If people don't trust anything, during a war their reaction is one of panic, because they have nothing to lean on. Ukrainian society, by contrast, has proven to be united and resilient in a moment of crisis."

"A society must deliberate what it wants for itself. Every society has some divisions, but there are some red lines that it negotiates internally, and one of them is what you don't do in this situation," he added. "My feeling is that this is what worked in Ukraine. The second most important thing is to realize that we are all equally fragile. Nobody is protected. If I think something can't happen to me, it doesn't increase the chance that nothing will happen to me," Krastev said, when asked from the floor what conclusions can be drawn for Bulgaria from this conflict.

According to Mr Krastev, the two successive crises - first the pandemic and now the war in Ukraine - have accelerated processes already underway - geopolitical and economic tensions, tensions in the technology sector. He said all this has happened before, but now it is happening in the span of weeks. And the idea of a return to normality is gone. He concluded that the welfare state has returned due to Covid-19, and now the war in Ukraine has brought back the national security state. Accepting the fragile nature of the world is key to this change.

He added that the importance of the sanctions imposed on Russia is not so much to hurt the other side, but to show that you are ready to withstand restrictions in order to defend a principle. "One of the things we don't realize is how Eastern European countries have suddenly become important because we are frontline states. And you can't tell a country like Poland, which is hosting a 1,5 million refugees, that it has a slight problem with the price of gas," the political scientist said.

"Bulgarian institutions have been captured and this has happened mostly because of the inactions of the Prosecutor's office. If we manage to fix it, many problems will be sorted out. At the moment we have the Attorney General who is the gatekeeper of everything. We literally have our hands tied." These were Prime Minister Kiril Petkov's words to an audience of Bulgarian businesspeople during his speech at the annual Government meets Business meeting, organized by Capital weekly each year.

Before the meeting, he said that the current gas crisis is another legacy of Russia's war in Ukraine and follows well-planned calculations by Vladimir Putin. "Our fledgling government was caught in a perfect storm. Unfortunately, Putin has long had a strategy - Gazprom controls German gas storage facilities and controls the overall price of gas in Europe," Mr Petkov said.