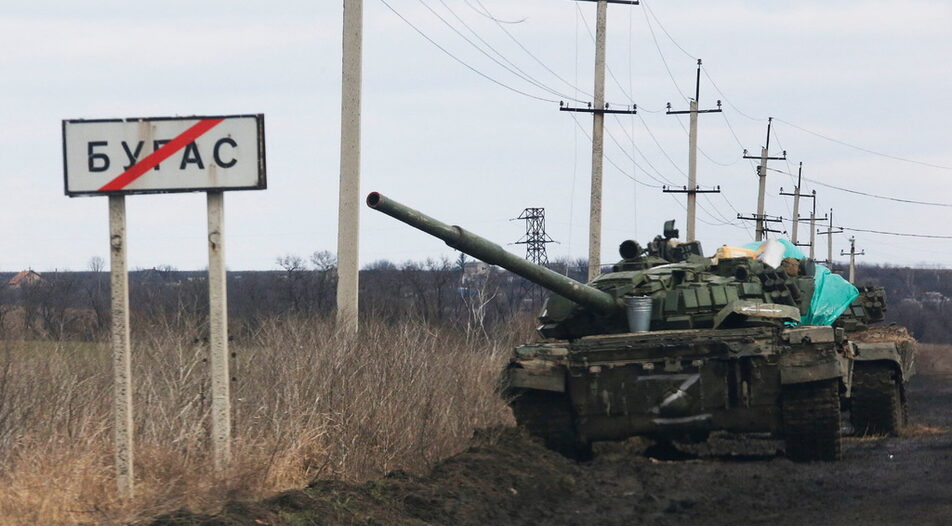 The week: Russian tanks steal our common future, stacking up on grain, some good ideas

They've been there before, now they're back

The week: Russian tanks steal our common future, stacking up on grain, some good ideas

They've been there before, now they're back

Brain drain. I've spent the past two years preaching to the world that this long standing curse, plaguing our region for decades now, was finally ending. By all conceivable yardsticks, Central and Eastern Europe had been making advances - higher salaries, roaring economies, better quality of life, improving cityscapes, even corruption was getting manageable. There was, I believed, a momentum for attracting back the human capital Bulgaria and others had lost to the West.

Then the tanks rolled in.

If there is one abiding image the West has always had of Eastern Europe, it's always been of mud and ruin. It was unfair perhaps, but that's exactly what the Russians are dragging us back to. I cross every finger I have that Ukraine will not let them and will stand tall and bright, recovering from the wounds it suffers every day.

Yet I'm filled with fear.

Wars have a way of leaving scars for decades to come. I am from the Balkans and believe me when I tell you - it has been 30 years since the Yugoslav wars and the echo still reverberates. If you listen very hard, you can hear it in Bosnia's political shifts, Serbia's support for Moscow and Kosovo's desire to join NATO fast.

I fear brains will start leaving this region yet again.

Ukraine, of course, suffers the most. Its bright and young people are either leaving or staying to fight. Both outcomes are not what you would expect to happen when you're 20 or 30. This should be their time to enjoy life to the full, feel the joys of love and relish freedom, damn it!

Many of those leaving fled to neighboring countries, and Bulgaria will also probably get its fair share. That's not how you want to get your human capital. Yet it is a reshuffling, once more, of the demographic puzzle of this long-suffering region. I hope we don't keep on bleeding brains to other, "safer" destinations. I hope this madness stops and we get back to building better countries. I hope we can keep the momentum we had, before the tanks dashed our dreams. I hope history, with its damn jinx over this region, will finally let us reclaim our future.

It's time for the fear to give way.

Advertising
this newsletter was helped by

Sanctions against Russia? Bring them on! Not the gas though!

Here is a lesson in preparedness: if you want to be tough on someone, make sure you're not dependent on him. On Tuesday Prime Minister Kiril Petkov told Parliament (and Reuters a day earlier) that Sofia would seek to opt out in the event of a total sanctioning of Russian oil and gas exports to the EU - something already implemented by London and Washington.

"Bulgaria will back any measures, because we are against the war, but those two [gas and oil] we might want to exclude them," Mr Petkov told reporters, adding that Bulgaria simply does not have short-term fossil fuel importation alternatives.

To be fair, Sofia is far from alone

Berlin, a much more important energy client of Moscow, does not seem ready to go that far, either. So don't expect the EU to get gas-tough any time soon.

In other basic resources news, Bulgaria is planning to stock up on grains and fodder. After more than a week's speculation about a possible ban on exports of cereals, Deputy Prime Minister and Minister of Finance Assen Vassilev confirmed on Wednesday that the authorities won't ban exports outright, but will instead dedicate about a billion BGN to purchase grain in order to stockpile the National Reserve with enough maize, sunflower seeds and grain for a year's worth of consumption.

While preparedness for a grain crisis is admirable (Ukraine and Russia are top producers of cereals and the problems the war will cause with production and exports might hit the global markets soon), it might heavily disrupt one of the few relatively healthy and smoothly-working sectors of Bulgarian agriculture.

Refugees welcome - finally by the state, too

And now, to give credit where it's due: the national authorities are starting to catch up with the voluntary efforts of the civic sector to help arriving Ukrainians and launched a unified national portal for the people affected by the war - and all those who want to help them. Called "Bulgaria for Ukraine," the website provides vital information about evacuation efforts of the state and private citizens, where Ukrainians can settle (even institutional recreation spots such as hotels and sanatoriums will open doors for them!), where Bulgarians can deposit donations or go to volunteer It appears quite useful, indeed - don't hesitate to check it out and help, if you can.

The thing we missed the most: a new lefty-patriotic party

Or at least this appears to be what former Defense Minister Stefan Yanev seems to be thinking. Rumor has it, Mr Yanev - who refused to call the Russian invasion of Ukraine "war", and lost his job for it - is planning to call his new formation "Velika Bulgaria," which literally means "Great Bulgaria," but also makes allusions to the "Greater Bulgaria" of Medieval times. Of course, while being patriotic is a must, it does not seem to be enough these days and Mr Yanev is planning to take a leftist turn, so he met old BSP cadre, former Ombudsman and defender of the people Maya Manolova this week. Let's see what they're up to - enmeshing nationalism and socialism rarely ends well.

Many might have forgotten the pandemic now that we have a war on our hands, but 8 March marked two years since Bulgaria recorded its first case of the novel Coronavirus. The same date marked yet another solemn landmark - 36,000 deaths attributed to the disease, and this is only the confirmed cases. May they rest in peace and let's hope at some calmer time (if there is such a thing anymore) conclusions will be drawn and lessons learnt.

So is a new head of BNB finally coming?

This Tuesday was the last day for official nominations, yet none were filed. This means a new procedure will take place. There is one eager candidate - the chairman of the Parliamentary finance committee Luybomir Karimanski, yet he obviously doesn't have the full backing of other parties in the coalition. So for now, Dimitar Radev will remain in place, although his mandate ran out last year.

The war will redraw the new budget,

According to finance minister Assen Vassilev in this Capital interview.

Was the official growth of the Bulgarian economy in 2021, reveals the National Statistics. This is the fastest pace since 2008.

Million levs were spent by Bulgarians on clothing and shoes online last year. The e-commerce association forecasts that the whole e-market in the country is going to be 2.4 billion levs for 2021.

Growth in productivity has been registered per capita last year.

Bulgarian software company with offices in Sofia and Pristina and more than 300 employees, has been purchased by the British Kin + Carta. The public company announced the news to the London Stock Exchange, where the price is listed as 17.7 million pounds. Apart from that, current shareholders in Melon will get an additional 5.8 million pounds over a 3-year period, given certain conditions. This puts Melon in the top 10 of the Bulgarian software companies by price.

Here are some other tips on who might follow Payhawk as an emerging unicorn (for more than a billion dollar valuation) from the Bulgarian tech scene. Also, expect a whole new tech report from K Insights next week - to be available for purchase.

The war dragged down CO2 quotas

They have been dropping day by day for two weeks now. This week they've hit 58 euros per ton, which is the lowest they've been since November last year. This is rare good news in a sector dominated by disasters last quarter.

Alexander Dounchev The We Continue the Change MP and former environmentalist has a long track record of working to ensure the protection of Bulgarian forests. In recent weeks he has been a one-man-army, launching an all-out war against the political appointments in the forestry sector by his party's coalition partners from BSP, who control the Agricultural Ministry.
PLACE Sofia

Yes, the capital gets a nod in our weekly newsletter with these seven ideas for a better city.

Autumn - yes, we know it's not very specific, but that's the new "deadline" for the completion of the Bulgaria-Greece gas interconnector according to Teodora Georgieva, the director of the company that is constructing and will operate the gas link.

Brain drain. I've spent the past two years preaching to the world that this long standing curse, plaguing our region for decades now, was finally ending. By all conceivable yardsticks, Central and Eastern Europe had been making advances - higher salaries, roaring economies, better quality of life, improving cityscapes, even corruption was getting manageable. There was, I believed, a momentum for attracting back the human capital Bulgaria and others had lost to the West.

Then the tanks rolled in.