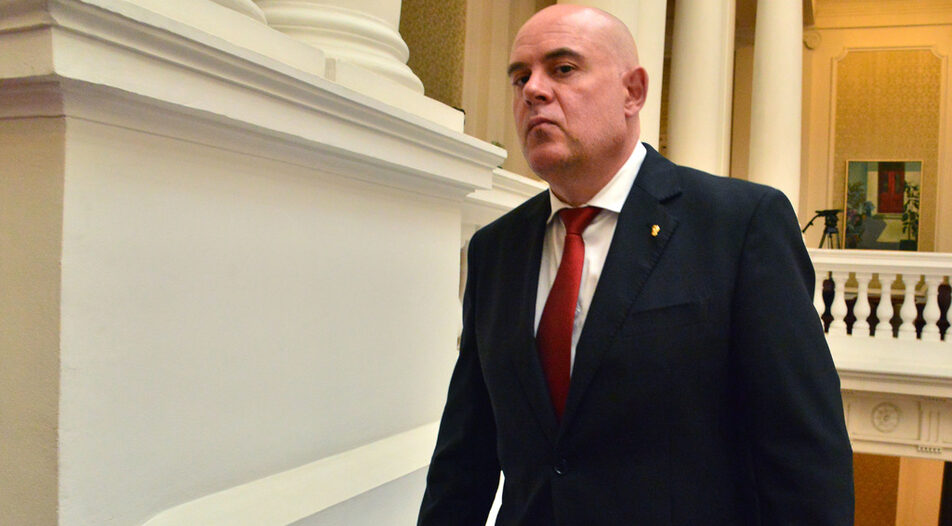 The Chief Prosecutor and the Old Guard

F-16 are not on the horizon, while trains are

The Chief Prosecutor and the Old Guard

D'you know the old joke: a history professor is examining two students. One he really likes, the other annoys him. And so he asks the first one "what's the biggest conflict of the last 5 centuries and how many lives did it claim? To which of course, the student replies fast - World War 2 and over 70 million. Then the professor turns to the annoying student and asks, with a sly smile: "now give me names and addresses of victims".

That's exactly what's been playing out between Chief Prosecutor Ivan Geshev and Prime Minister Kiril Petkov recently. Riled that the new government is intent on replacing him, Geshev sought a meeting with Petkov this week. The formal reason: to ask for the specialized prosecution and court to continue working (though they have yet to bear any fruit in the fight against corruption, 10 years on). The real one - to probably try to bargain for some sort of understanding. Geshev is the last remaining gatekeeper of the old regime and probably faces heavy pressure himself.

Petkov denied him. For someone used to working with a PM who rarely raised the issue of corruption or associated high profile wrongdoers, this must have been a new, unnerving experience.

So Geshev resorted to what he's good at - petty tricks. He summoned the PM and his chief of staff to give evidence about "names mentioned in the conversation" whom Petkov claims are behind Bulgaria's grand corruption of recent years.

Amongst the names are Petkov's predecessor Boyko Borissov, Magnitsky sanctioned' Delyan Peevski, the ex-drug lord and exile Hristoforos Amanatidis-Taky, the eternal player in garbage collection and other procured areas Rumen Gaytanski -The Wolf and others.

Those are names, rumored and whispered in every corner of Bulgaria for years now. Capital Weekly (our mother edition) has spent the better part of a decade investigating and reporting on them. The fight to expose Peevski's empire, for example, took years - officially he went from owner of an apartment and an old car to insanely rich in the space of a year. And not a single institution in this country found anything suspicious about that - it took the US finger to lift the veil over his shady enterprises.

And so, to sum it up, the institution entrusted with enforcing the law, ransacked by corrupt oligarchs for ages, asked the PM who's been on the job for 1 month, to basically do their job for them.

It would have been hilarious if it weren't sad. This is, after all, as pure an illustration as possible, of how this country has been ruled for so long.

Geshev seems to think this can continue. Petkov's job is to prove it won't. It's as simple as that.

Planes! A lot of planes.

Let's start with the fighter jets. First of all, we got news of four Eurofighter EF-2000 Typhoon jets of the Spanish Royal Air Force arriving at Graf Ignatievo air base to join their Bulgarian counterparts and air police the troubled skies over the Black Sea. They would be accompanied by a 130-strong force, the Ministry of Defense announced on Tuesday.

Spanish jets - good. Yet what happened to ours?

Sofia will likely not receive its new squadron of advanced F-16 jets, scheduled to arrive between the start of 2023 and 2024, due to supply chain issues within the Lockheed Martin corporation in the US. This is the official version.

This means Bulgarian pilots will continue flying the ancient MiG-29 Soviet-era jets and the Defense Ministry will continue funneling millions - 126 million levs only for 2022, to be precise - for their maintenance which continues to happen with spare parts from Russia.

Boyko, where are the planes?

President Rumen Radev, himself a fighter-jet pilot and ex-commander said this also creates the risk that Bulgaria "loses sovereignty over its airspace, which is a NATO airspace, and be unable to protect it." Radev asked the media to demand an explanation from Boyko Borissov, whose government rejected the deal with Sweden's Gripen and turned to the US, paying 2 billion levs in advance for planes that are way beyond the horizon.

And to finish this air-segment, good news. The maiden flight between Skopje and Sofia is a fact! It happened today and on board were members of the Bulgarian government, to be received by their fellow North Macedonians.

We might not be getting F-16s, but we are getting radars

Defense Minister Stefan Yanev met with State Department Counselor Derek Chollet, who visited Sofia for a Strategic Bilateral Dialogue. Turns out, Bulgaria will be getting some stuff. First, armored vehicles for its land forces - a long-dragging modernization and rearmament project. Then - 3-D radars, which will be deployed around Bulgaria and would be essential to the integration of the new F-16 jets. When they arrive, that is.

And also, some US troops who will be joining the special NATO-aligned battalion battle group announced last week.

How many universities do we need?

A misrepresented leak from a strategic analytical document of the Education Ministry about the need to reform the Higher Education sector created quite a lot of fuzz earlier this week. An alleged plan to "optimize" the number of Universities down to 18 (out of about 50 at the moment) by integrating several institutions of higher learning together sparked bitter exchanges between the Education Ministry and university rectors and staff.

In the end, the ministry claimed this is just a possible scenario described in an analytical paper that will have to pass a series of stakeholder and public discussions, but one thing was made clear: any attempt for radical reform in the struggling sector would be very, very difficult to achieve. At the same time, scientists from the Bulgarian Academy of Sciences (BAS) demanded an increase in their budget by 20 million BGN "to assure the normal work of the institution". Just a note - BAS consists of 42 scientific institutes, each employing hundreds of staff. The level of funding they all receive is appalling and explains the disastrous state of Bulgaria when it comes to EU R&D statistics.

The famous Plan for Recovery is back!

It hadn't been anywhere, of course. We're still struggling to get it done and get at least some funding this year. But the new team in the Ministry of finance is presenting their version which includes some changes in the energy area, and some other minor tweaks. Honestly, we're all so tired of this thing already, we just want to see it finished.

The main things to watch out for:

Maritza Iztok Coal Complex is not going to be closed so easily, as this government will try and find a working solution for the time being. This will not go down well with the Commission. But what will be the new transport strategy? The new minister - owner of "Econt" courier service Nickolay Sabev, threw out his predecessor's entire package and focused on trains, trains, trains.

There will be lots of new trains for intercity, regional and urban travel. That's what Sabev wants, at least. How he will achieve it, is another matter.

Is the state-expenditure for healthcare for 2022, according to the new Health budget, just voted in.

in Bulgaria have declared monthly income over 3 thousand levs or 1500 euro. 25% of them are in IT.

The company is opening up a new R&D and production center in Plovdiv. The investment is going to be up to 10 million levs. It is expected to employ more than 100 people.

The company, which became the biggest in the country by revenue for 2020, shows a good growth in production for the first quarter of the financial 2021-2022, which started in October. While financial results for the Bulgarian factory are not available, the production report shows growth in almost everything, except copper.

BDZ State-owned cargo and passenger train companies are coming back together, announced the new transport minister Nickolay Sabev. This is supposed to fix some of the problems of the passenger unit.

- The Commission is asking Bulgaria, Cyprus, Greece, Lithuania, Luxembourg, Romania and Slovakia to update their Flood Hazard Maps and Flood Risk Maps. - In addition, infringement procedures may start on biodiversity and signal weapons for Bulgaria.

- The 8th Cohesion Report published by the Commission shows that Cohesion policy (not surprisingly) has not really helped to narrow territorial and social disparities between regions in the EU and Bulgaria still lags far behind.

Ivaylo Iaydjiev - the man with the Plan. The new deputy-minister of Finance came from Brussels to help the government put together the final touches to the long awaited Recovery and Resilience plan.

Lyubomir Karimanski - the TISP economist seems to be trying to push forward his own nomination for National Bank governor yet again. The mandate of current governor Dimitar Radev lapsed last summer, but political instability kept his replacement off the table - for the time being.

Stanislav Todorov - the new chairman of the Energy and Water Regulator

15 February - A month after the previous one, President Radev re-convenes the Consultative National Security Council, this time - to discuss the state of the armed forces in light of the Ukraine crisis.

Place: Bangkok! A new direct flight was announced from Sofia to the Thai capital, by the new company Gulivair. The same one that will fly to Ruse and yes, Skopje.

Movie: Three meetings of the extraordinary committee - a short film about a Bulgarian village and its struggle with democracy, shot by two British directors and with a Bulgarian cast (led by the very talented Martin Hristov), has just received a BAFTA nomination.

D'you know the old joke: a history professor is examining two students. One he really likes, the other annoys him. And so he asks the first one "what's the biggest conflict of the last 5 centuries and how many lives did it claim? To which of course, the student replies fast - World War 2 and over 70 million. Then the professor turns to the annoying student and asks, with a sly smile: "now give me names and addresses of victims".

That's exactly what's been playing out between Chief Prosecutor Ivan Geshev and Prime Minister Kiril Petkov recently. Riled that the new government is intent on replacing him, Geshev sought a meeting with Petkov this week. The formal reason: to ask for the specialized prosecution and court to continue working (though they have yet to bear any fruit in the fight against corruption, 10 years on). The real one - to probably try to bargain for some sort of understanding. Geshev is the last remaining gatekeeper of the old regime and probably faces heavy pressure himself.