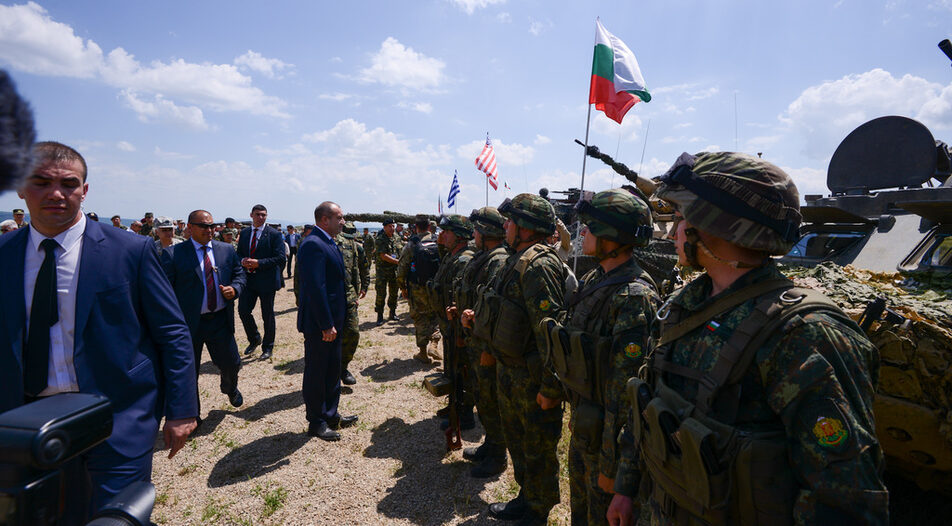 Between a rock and a hard place: Bulgaria and the Ukraine crisis

Between a rock and a hard place: Bulgaria and the Ukraine crisis

Stuck in the middle of its allegiance to the Euroatlantic Alliance and its volatile domestic politics, Sofia is choosing to keep a low profile amidst rising NATO-Kremlin tensions

Clouds have been gathering above Eastern Ukraine for some months now, with Russian troops threatening to invade for the second time in less than a decade. Despite this happening almost on Bulgaria's doorstep - the easternmost part of the country is just 200 kilometers away to the nearest Ukrainian port - Sofia seems reluctant to prepare or even aknowledge the conflict.

While other nearby NATO allies like Poland, the Baltics, and especially Romania, wholeheartedly welcome any additional troop deployments from allied countries, Bulgarian politicians prefer to keep their voices low.

The Defense Minister brushes off any mention of strengthening NATO presence in the country, somehow romantically dressed up as some kind of a Bulgarian NATO battalion. Meanwhile, the Prime Minister mostly repeated the "diplomatic solution" credo, as if it's Sofia's role to broker peace.

This it actually understandable, given the circumstances. Let's delve on the Bulgarian position on the conflict and what lies behind it.Hiding one's head in the snow

Last December, just as Bulgaria was mustering its first regular government since May, Western intelligence agencies and media warned of a Russian military build-up of up to 100,000 troops near the disputed Donbas region of Ukraine. Somewhat understandably, given the energy crisis, the pandemic and the rotten mess they inherited, the newcoming government hardly ever mentioned this crisis.

Just before the Christmas holidays, Prime Minister Kiril Petkov and Defense Minister Stefan Yanev indirectly clashed about potential additional NATO forward deployments to the country, but that was as close as they got to naming the crisis for what it is.

This changed last week when Mr Petkov and President Rumen Radev made some limited, but hopeful remarks in response to a Russian Foreign Ministry demand that NATO withdraw behind its 1997 borders. Mr Petkov told Parliament last Wednesday that Bulgaria would be a "responsible ally" in NATO with a "predictable position" and Mr Radev later commented that "Russia's insistence on withdrawing NATO forces from Bulgaria is unacceptable and pointless" and that "our country does not accept ultimatums from anyone".

At the same time, Defense Minister Yanev, who has consistently been most steadfast against any public announcement of further troop deployment to Bulgaria, reiterated his stance and "sold it" to the Security Council, summoned by the Prime Minister on Wednesday. In a nutshell, his position was that Bulgaria has to strengthen its own army and mostly rely on it in case of conflict with an important caveat - assisted by its allies.

"Bulgaria is a sovereign state and any decisions [regarding foreign troop deployments] would be taken in Sofia in accordance with the Bulgarian national interest. If some country says: "we want to send in some troops," this would only be done after the Bulgarian government decides on it. And currently the decision of the Bulgarian Government is to deploy Bulgarian troops on Bulgarian territory. This does not mean that they will do anything different, except that they will intensify their training," Mr Yanev told bTV on 30 January.

He stressed the "need to be cautious with the use of words" and not use any rhetoric that might undermine diplomatic efforts.

Made in Bulgaria, contains no traces of NATO

Practically, what Mr Yanev and Mr Petkov proposed to Parliament is that, instead of strengthening NATO forward presence in the country with foreign troops, Bulgaria will use its own battalion with a strength of about 1,000 servicemen to serve as "NATO's enhanced forward presence" here. This battle group would be kept in a high degree of combat readiness and, explicitly, under Bulgarian command.

The important bit came later: Mr Yanev added that Allied units could be attached to this battalion and "fill the gaps in experience and technology" it may have.

To name things as they are - this is basically NATO deployment, without the tag. It is expected that the Joint Air Policing Force operating in the country will be strengthened by Spanish and Dutch fighters (including two of the Netherlands' most advanced F-35 stealth fighters) under this mechanism in the coming days.

Of course, aiming to improve our own forces and relying on them sounds eminently reasonable, but in the short term it would hardly mean a thing in the unlikely case Russian "little green men" land on Bulgaria's shores.

In practice, this battalion battle group plan has several major flaws. First, it is too little, too late - according to Democratic Bulgaria MP and former caretaker Defense Minister Velizar Shalamanov, Sofia had agreed to have an entire combat brigade (an army unit consisting of several battalions) that complies with NATO standards and is ready to take part in Allied operations as far back as 1997. This was long before Bulgaria joined NATO in 2004. Of course, the Bulgarian army has still not managed to build up such a force. "25 years later, by reducing this brigade to a battalion, we are taking a step back," Mr Shalamanov told Bulgarian National Television last Sunday.

Secondly, the "national" NATO battalion battle group as promoted by Mr Yanev and Mr Petkov ("we will have Bulgarian troops under Bulgarian command deployed on Bulgarian territory," is a credo that both of them repeated several times over the past week) contravenes the logic of NATO's "Framework Nations" concept. The idea is that larger militaries separated from the Russian flank deploy in countries bordering a potential crisis zone in order to bolster their capacity and act as a deterrent to potential Russian attacks, which would be considered attacks against the larger Allied army, and thus NATO as a whole.

There are several reasons for the reluctance to shout out. The most straightforward one is, of course, that they are simply, well new to the job and do not want to make grand moves in the first months. Unfortunately, a potential armed conflict a stone's throw away from Bulgaria would not respect such caution.

The other (timeless) reason is that Bulgarians have always been more traditionally pro-Russian than other nations in the region. A recent Gallup International survey published on 28 January showed that, despite the obvious role of Russia in instigating the conflict, more Bulgarians think Washington has a more destabilizing role (53 percent) in global affairs than the Kremlin (33 percent). Previous polls have shown around 30 to 40% of the population being very sympathetic to Russia.

It is only reasonable that such widely shared beliefs make anyone in power reluctant to act in a way that might rile Moscow - or its local fans here.

Political deadlock under the surface

Lastly, we need to account for the intricate political calculations in Bulgaria right now. The largest party in the ruling coalition, We Continue the Change (WCC) has no real foreign policy and defense expertise. Neither does it have people with experience, clear vision and international contacts.

The same applies to Slavi Trifonov's TISP party. Foreign Minister Teodora Genchovska, who was nominated by the party, is little more than a proxy of the President and the Defense minister, both of whom she used to work for. She has very little high-level diplomatic experience and has missed all EU summits since the start of the crisis, so not partaking in joint European policymaking on the topic.

The BSP leadership, for its part, has always been heavily pro-Russian. At the opposite end, Democratic Bulgaria has several well-prepared, pro-Euro-Atlantic policymakers, but the party was sidelined from the defense and foreign policy fields during coalition negotiations and chose instead to focus on the judicial reform it cherishes.

At the same time, President Radev and Defense Minister Yanev, who are both former high-ranking military commanders, have enough capacity and expertise, but at least on the surface they prefer to take a nation-centered, non-aligned position.

A likely explanation for the muted reaction from high-level decision-makers is that they do not want to provoke the strong pro-Russian proxies both within government and in opposition, such as BSP and the Vazrazhdane ("Revival") parties. This might lead to escalation and even dissolution of the acting government and parliament, and potentially further destabilize the country, which is already reeling under the weight of high utility prices and the pandemic.

For the time being, keeping a low profile and waiting for tensions to cool down appears to be a working strategy. But if the new Cold War between Russia and NATO turns hot, this halfheartedness will no longer be an option.

Clouds have been gathering above Eastern Ukraine for some months now, with Russian troops threatening to invade for the second time in less than a decade. Despite this happening almost on Bulgaria's doorstep - the easternmost part of the country is just 200 kilometers away to the nearest Ukrainian port - Sofia seems reluctant to prepare or even aknowledge the conflict.

While other nearby NATO allies like Poland, the Baltics, and especially Romania, wholeheartedly welcome any additional troop deployments from allied countries, Bulgarian politicians prefer to keep their voices low.