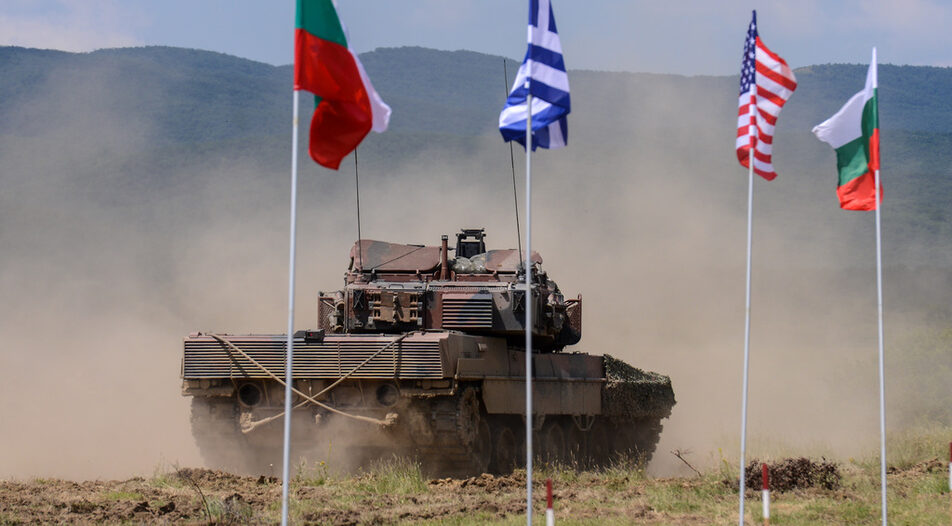 A reluctant NATO ally, OECD invitation 15 years in the waiting and a new name for Telenor

A reluctant NATO ally, OECD invitation 15 years in the waiting and a new name for Telenor

Sofia hopes for the best - and not much more - in NATO-Russia clash, Telenor turns into Yettel and changes coming to the Energy regulator

What do you do when a military conflict is brewing on your doorstep?

If you are the new Bulgarian government, you say that you hope diplomacy will fix the issue, promise to form a special Bulgarian NATO battalion (as if the other Bulgarian army units are not part of NATO) of "no more than 1,000 troops" that will train with Allied forces, and claim that you are a "constructive ally," as if the other members of the Alliance can't see the reality: Bulgaria is woefully unprepared for a potential war in Ukraine, and is unwilling to commit to any decision that might lead to the bolstering of NATO forces here.

This emerged after members of the cabinet held a Security Council on Wednesday, followed by a PM hearing requested by GERB in Parliament. Prime Minister Kiril Petkov tried to combine a pacifist rhetoric with a firm commitment to Euro-Atlanticism, but sounded unconvincing when he promised "working with all available diplomatic instruments to de-escalate tensions," as if Sofia has any substantial role in negotiations.

His claims sound even more incredulous if we consider that Bulgarian Foreign Minister Teodora Genchovska practically missed two opportunities to help establish a common European position on the Ukraine crisis. She missed the two latest EU Foreign Ministers Councils, first because of Covid, and again earlier this week because she was busy welcoming N. Macedonian Prime Minister Dimitar Kovachevski to Sofia.

All this is compounded by Defense Minister Stefan Yanev feigning blissful ignorance when the Russian military build-up is mentioned - so much so that he appealed to MPs to "stop reading foreign media" about a potential conflict in Ukraine, and you get a very bleak picture.

Obviously, the last thing Bulgaria (or anyone of sane mind) wants is further escalation of the conflict. But pretending nothing is happening and trying to dodge any commitment to the Alliance is definitely not helping to displace Sofia's image as the Russian "Trojan Horse" in Europe. Especially when, at the same time, neighboring Romania is negotiating with the US and France for concrete ways to boost their troop presence in the country.

Again N. Macedonia, again nothing much

The highlight of the week was supposed to be the reciprocal visit of the N. Macedonian government to Sofia on Tuesday and Wednesday. The results from it were well summarized by a N. Macedonian deputy regional minister on a local TV show: "Even if we are now just pretending to act as good neighbors, it is better to play good neighbors and create a positive atmosphere so that we can make the next step soon".

On the positive side, it seems that identity-loaded questions have been shelved by the two governments for now. Instead, the visit focused on establishing four new committees to discuss infrastructure, culture and other non-history related issues. The big test for the short term is whether these intergovernmental meet-ups will 1) continue on a regular basis (Borissov also organized such meetings in his third term, but nothing came out of them), 2) lead to tangible results any time soon.

Ninova survives as BSP leader on the wings of power

While many political leaders - such as Kornelia Ninova's own declared idol, Margaret Thatcher - were 'decapitated' by their parties despite winning elections, Ms Ninova pulled off an extraordinary feat - losing so many elections decisively, yet still managing to get her party in power for the first time in a decade, but also retaining her leadership.

Last Saturday, the National Congress of BSP voted not to even vote on Ms Ninova's resignation, which she filed in November after her party's disastrous performance at the last election. The young hope of modern leftists, Krum Zarkov, was not even allowed to make his bid for the post.

Bulgaria remains bottom of the EU in the annual Transparency International Corruption Perception index released on Tuesday, even falling two places in the global ranking compared to 2020, down to 78th place out of 180. Sofia is now in the company of Burkina Faso (which is undergoing a coup as we speak) and Benin. The nearest EU country is Hungary (73), while Romania has climbed one place to 66.

Hearings, so many hearings

If you ask Prime Minister Petkov, this has to do with the failure of the Bulgarian State Prosecution to properly investigate graft. At least this is what he said during a hearing by the European Parliament's Rule of Law and Human Rights committee on Thursday. He outlined the cabinet's plans for reform of the key anti-corruption bodies (read more about them next week in KInsights) and promised to lessen the role of the Prosecutor General to an administrative capacity.

Talking of Mr Geshev, he also appeared in Brussels at the same time, complaining of the new authorities' interference in his job and even calling for a return of European oversight of the Bulgarian judiciary - something he opposed as recently as the end of 2019.

Lastly, while the two spoke to MEPs, anti-corruption commission president Sotir Tsatsarov attended a hearing in the Bulgarian Parliament. Nothing much came out of it, as the ruling parties seemed woefully unprepared to grill him.

Bulgaria has been officially invited to start membership negotiations with the Organization for Economic Co-operation and Development (OECD). This happened 15 years after Sofia sent a request to join the "club of mostly rich countries". In 2019, the country adopted a national action plan, which was approved by the organization. Subsequently, Bulgaria joined different legal instruments of the organization in key areas, and an economic review of Bulgaria was prepared. And here we are now - on January 25 the OECD Council actually opened accession discussions with five more candidates - Argentina, Brazil, Croatia, Peru, and Romania.

This follows careful deliberation by OECD Members on the basis of its evidence-based Framework for Consideration of Prospective Members and the progress made by the six countries since their first respective requests for OECD membership."OECD membership remains the most direct and effective way to ensure the adoption and dissemination of our shared values, principles and standards across the world," said OECD Secretary-General Mathias Cormann after the decision.

Bulgaria's membership of this "club" would certainly increase investor confidence as the organization is a forum of the world's most developed market economies.

Fitch Ratings has affirmed Bulgaria's long-term foreign-currency issuer default rating (IDR) at 'BBB' with a positive outlook. The positive outlook reflects the prospect of euro adoption, which would lead to significant improvements in external metrics, the rating agency said.

10.5 billion levs Was collected by the National Customs Agency in 2021, which is 15% up compared to its revenues in 2020. The economic recovery and inflation explain the better results. 6 billion levs

Will be paid from the health insurance fund for examinations, hospitals, and medicines in 2022. This is 604 million levs more than was paid in 2021, according to the draft NHIF budget for 2022.

Streaming service Disney+ plans to scale up its operations this summer with a significant expansion planned into 42 more countries. And one of them is Bulgaria, announced Walt Disney Company.

This is good news as it means Bulgarian consumers will now have access to all popular streaming platforms in the world: Netflix, Amazon Prime Video, HBO GO (which in time will become HBO Max), Apple TV +, and now Disney +.

Holland to open stores in Bulgaria

UK-based health and beauty retailer Holland & Barrett has entered an agreement with the Greece retail and consumer goods company Fourlis to expand its presence in Europe. It will open 120 Holland & Barrett stores in Greece, Romania, and Bulgaria.

The manufacturer of bags and packaging announced it is launching the construction of a fourth plant near Veliko Tarnovo. It will be dedicated to the production of paper bags. The project is worth more than 12 million BGN and is part of a larger package of investments totaling 25 million BGN.

After heated debates on Thursday, the ruling coalition managed to change the structure of the Energy and Water Regulation Commission (KEVR) and cut down the number of commissioners on the body from nine to five. Despite criticism from opposition parties MRF and GERB that the new majority is trying to hijack the regulator, the changes to the number of commissioners were passed and will be effective from next week, when Parliament will have to vote to change two of them - the President of KEVR and one of the energy experts, as the mandates of current President Ivan Ivanov and expert Evgenia Kharitonova have expired. The only two nominations for the positions are Deputy Minister of Energy Stanislav Todorov (nominated by WCC), who has a background in management within the AES Services - Bulgaria, and energy expert Blagoy Golubarev from TISP, who used to be the co-founder and first president of the Association of Traders with Energy in Bulgaria.

The Bulgarian journalist is taking over the day-to-day running of the Netherlands-based investigative journalism website that specializes in fact-checking and open-source intelligence after its founder Eliot Higgins announced he is withdrawing to become the organization's Creative Director.

12 February
On this day, far-right sympathizers from across Europe commemorate pro-Nazi general Hristo Lukov, who was assassinated in 1943 by Communist party members, with a torchlight procession in the center of Sofia. Often they are faced off by Antifa protesters, and in recent years - dispersed by the police.

The largest Bulgarian mobile operator and third largest telecom company announced it is rebranding and will be called Yettel from 1 March. The owner company PFF Telecom Group said the change of names will also apply to its telecom operators in Hungary and Serbia.
Word of the week: Belina (Bleach)

Foreign fads usually take a while to reach Bulgaria, but the trend of people consuming disinfectants to supposedly cure or protect themselves from Covid-19 arrived just 18 months after it first appeared in the USA. An "investigation" by bTV found that chlorine dioxide is being sold as an anti-Covid medicine on an anti-vaxx Facebook group with 10,000 followers. The speculative title used by bTV: "Why do thousands of Bulgarians use bleach instead of medicine?" provoked mockery on social media and got picked up by other media, although the report never really proves anybody actually consumed the disinfectant (which is close to, but not bleach per se), but just that it has been sold by speculants. Alas, who reads more than titles these days, anyway?

What do you do when a military conflict is brewing on your doorstep?

If you are the new Bulgarian government, you say that you hope diplomacy will fix the issue, promise to form a special Bulgarian NATO battalion (as if the other Bulgarian army units are not part of NATO) of "no more than 1,000 troops" that will train with Allied forces, and claim that you are a "constructive ally," as if the other members of the Alliance can't see the reality: Bulgaria is woefully unprepared for a potential war in Ukraine, and is unwilling to commit to any decision that might lead to the bolstering of NATO forces here.