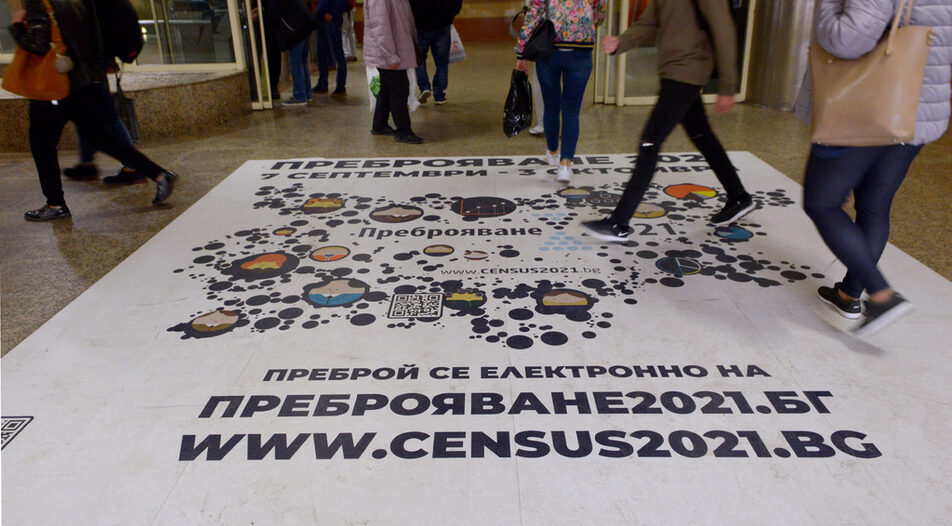 The week: A smaller Bulgaria, the Macedonian hostages, and an MMA real estate tycoon

The week: A smaller Bulgaria, the Macedonian hostages, and an MMA real estate tycoon

K Insights: Is small necessarily bad, how many tunnels can you dig for 12 bln. levs and what do e-buses and corruption have in common

So, it's official. Bulgaria's population has dwindled to 6.5 million.

This is the preliminary figure given by the National Statistics Institute (NSI) after the rather difficult National Census that took place last autumn.

This is also the lowest population the country has had since 1934, NSI said, and the situation will only be getting worse - older people above the age of 65 have increased to almost a quarter of the population, the proportion of young people is also slightly decreasing from 16.1 percent in 2011 to 15.9 now.

The most dramatic - and dangerous - decrease is in the number of working-age adults, which has collapsed by almost a million people (886,000, to be precise) in a decade.

All cities (bar Sofia) have lost population, but the situation is much worse in Northern Bulgaria, where all regional centers have lost between 23 and 26 percent of their population in the space of a decade.

It's hard to see this as good news.

Yet let's face some hard truths. Bulgaria is part of the most rapidly depopulating region in the world. Almost all other CEE countries have lost similar numbers in previous decades - the first wave after the fall of Communism, the second - after the EU entry.

Demographic trends are very hard to turn around, especially in a decade. So it is conceivable that the country will keep getting smaller.

But, apart from a certain feeling of loss of your own tribe, which is psychological, are there any real problems with having fewer people? Mainly two: the economic blow from having more pensioners than workers, and the brain drain - young and able people leaving.

The first one takes adjustment. Bulgaria's pensioners are not the wealthiest people and those payments are rising slower than the real wages. So if the forecast for the system is made correctly and various assumptions entered into the model, we can figure out a way in which we can keep this working for at least several decades (which is supposedly enough time to reach an equilibrium state).

And this leads us to the second "problem" - the brain drain might already be reversing. COVID in particular, but the situation in Europe in general and better living standards, have brought waves of people back. If authorities are wise enough and the situation doesn't deteriorate drastically (for example, we see Russian soldiers on our soil) there is no obvious reason for this trend to stop.

Maybe Bulgaria won't reach 9 million people again, but it can surely keep somewhere around the current level and a bit higher. In a world that's rapidly growing in population and eats more and more resources this might not be the worst possible outcome.

Or, more precisely, these past three weeks since our last newsletter.

Bulgaria: an active NATO member, but with a caveat

No foreign troops on Bulgarian soil. At least according to a Facebook post shared by Defense Minister Stefan Yanev in the last working days of December that caused some commotion in government circles.

"My position is that such debate and, respectively, approach might lead to an unwanted inflammation of tensions in the region," Mr Yanev said, referring to plans for further NATO deployments in Bulgaria and Romania because of the Russian military build-up on Ukraine's border.

German newspaper Der Spiegel attributed to US General Tod Walters, commander of the US Europe Command, such a request.

Yanev, who is the former caretaker PM, reiterated his stance on the topic in an interview with the Bulgarian Telegraphic Agency a few days later, saying that "Bulgaria is an active member of NATO, but as such cannot be the object of other countries' decisions".

The statement comes at an awkward time - at the peak of tensions between Moscow and Kiev, and just before NATO Defense Ministers meet online today to discuss the crisis. Yet this was more than a rogue statement: it exposed the underlying tensions between "President Radev's people," such as Mr Yanev, and the "Changemakers" of Prime Minister Kiril Petkov. While the former are prone to follow President Radev's milder approach to Russia, the latter are trying to position themselves strictly in the Euroatlantic sphere.

The new PM - Mr Petkov - quickly dismissed his minister's opinion, saying this was "not the position of the cabinet" and later told Bloomberg that "there will be discussions" about potential future NATO deployments.

In all of this, strangely enough, has been the Socialist party - the usual pro-Russian voice in the country. Being in government, not in the Foreign office, and estranged from the President, they are in a peculiar position and obviously prefer to stay silent for now.

An offer to the EU and the US: you want N.Macedonia? Visa waiver and Schengen

It all started from a Facebook post (apparently the favourite mode of communication of the new people in power as well), this time by the leader of the small coalition partner TISP Slavi Trifonov.

He proposed an amazing deal - Bulgaria would "unblock" Skopje's EU accession process, but would receive full membership in the Schengen space and suspension of US visa requirements in return.

This strange bargain has to be taken for what it is: an opening offer in a bid that's already ongoing. The Macedonian issue is going to be the first one to torment the new government. The PM obviously has plans and is working on them. Mr. Trifonov's party holds the Foreign Ministry, and he has a say there and also a nationalist image to defend.

It's highly unlikely that Brussels and DC will go with that "tit-for-tat" offer. Yet something's gotta give on this issue.

12 Billion levs, 4 bridges, 3 tunnels and more, so much more

Finance Minister Assen Vassilev (WCC) is not one to promise a lot. Yet he stunned the press earlier this week during an introductory press conference, when he casually mentioned the "new infrastructural program".

Thus Vassilev confirmed the words of other ministers that there is, indeed, going to be a huge effort over the next 4 years - in the skies, on the roads and over the water. Those include new bridges on the Danube, two completed highways - Struma (Sofia to Thessaloniki) and Cherno more (Varna to Burgas) and three tunnels under the Balkan mountain, to name but a few.

Yet a word to the wise: this sounds a lot like GERB in their first term, when huge promises were made. Mr Vassilev's optimism and calculations that "a bridge costs only about 100 mln BGN if there is no stealing" might be a bit overblown, as former EU funds minster Tomislav Donchev (GERB) commented later. Yet truth be told, if they hadn't discovered what a golden mine for corruption the construction sector is, GERB also might have fulfilled their promises. Alas.

Public finances ended with a deficit of 4 billion levs (8 bln euro) in 2021, or 3% of GDP, according to preliminary data from the Ministry of Finance published in December. In the last month of 2021, the costs doubled - 9.1 billion levs, which is a record that even GERB's government didn't reach in the past 12 years. A primary reason, however, might be the pensions' increase and energy subsidies, already planned for the first months of 2022.

The Finance Ministry also reported significant revenue growth in the past year - 52.2 billion levs, which is a nominal increase of 7.9 bln levs compared to 2020.

That's the bank profits for the first eleven months of 2021. They are up 52.8% compared to the profits reported in 2020 or 457 million levs more. Although these numbers show recovery of the sector, the results are still far behind the reported profits in the pre-crisis 2019.

Is the growth of residential buildings in the last decade - even though the population is falling.

is investing another 1.6 mln euro in eight startups. Some 3 million levs of total financing are public funds contributed by the Fund of Funds under operational programme Innovations and Competitiveness 2014-2020, the company said.

By the end of 2023, the fund is expected to support a hundred more startups in an early stage of their development and also small and medium-sized enterprises can receive funding.

A sudden blow to RES

The Energy regulator decided to drop the subsidies for the renewables sector, by raising the forecasted market price from 119 to 293.37 levs. In this way, the State will not pay the difference between the real price and the forecasted, which was the way RES were subsidised. The motive is that prices at the current moment are high enough and no such subsidy is needed.

Most of those RES however, have long-term contracts for delivery, based on the previous regulated price. This means they either have to break the contracts, or go into the red. Yet breaking the contracts might add fuel to fire by raising energy prices even more and in such a way, nullifying the gain the regulator hopes to make.

Is the MMA fighter and trainer who owns Stroyko 2011 - the company that keeps buying Delyan Peevski's real estate. Curious detail: Kostov acquired the company last month, and Peevski is Magnitsky-sanctioned, so how on earth will he get the 20 million levs his company is due?

Boyko Rashkov - the Interior Minister continues his war on GERB and Boyko Borissov. He testified before the Prosecution on the alleged misappropriation of funds for the construction of Hemus highway and also triggered the interrogation of Mr Borissov himself over the photos of him sleeping naked in bed next to gold bars in the drawer.

The President is supposed to convene a National Security Council on the topic of Bulgarian - N. Macedonian relations.

are the two places where the Anti-corruption commission suddenly decided to finally uncover some dirt. The mayors of both towns have been handed to the prosecution service for "influencing procurement" of e-buses in return for material wealth.

Let us enjoy this memory. In 2019, at the height of his rise as an anti-corruption commissioner (and the rumored tool of GERB and Peevski), Mr Georgiev was discovered to have illegally built a barbecue on a huge terrace adjacent to his apartment (which was itself discovered to be too expensive and beyond the reach of what he declared to be his official earnings).

As a "punishment" he got sent to Valencia, where he was appointed as a consul - despite there being no proof that he ever studied Spanish beyond a rudimentary beginners' course. He seemed to be forgotten for quite some time until this week, when Prime Minister Petkov announced that all political appointments in diplomatic positions will be revoked. The first one, alas, was that of poor Mr. Georgiev, who will now have to return to his terrace.

So, it's official. Bulgaria's population has dwindled to 6.5 million.

This is the preliminary figure given by the National Statistics Institute (NSI) after the rather difficult National Census that took place last autumn.