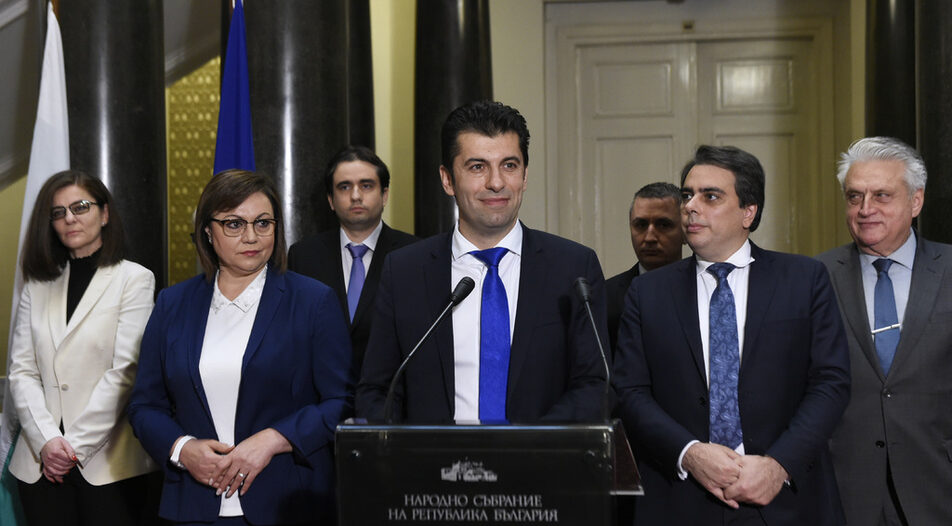 After seven months, Bulgaria gets a regular cabinet

After seven months, Bulgaria gets a regular cabinet

It will include ten ministers and deputy Prime Ministers from Mr Petkov's WCC, four each from the "bigger" coalition partners, BSP and TISP, and three from Democratic Bulgaria (DemBG) and is based on an unprecedented 140 pages-long coalition agreement that specifies concrete policy objectives, cooperation in the legislature and how appointments in the high offices of power will be managed.

Here is the full list of names and a basic who is who in the new government.

The new cabinet rides in on a wave of hope for change after over 10 years of painful stagnation in Bulgarian politics, mostly dominated by former Prime Minister Boyko Borissov and his GERB party. At the same time, Mr Petkov's cabinet will be facing a plethora of crises, including many issues related to the pandemic and the management of the Bulgarian healthcare sector, as well as rising energy prices and institutions in urgent need of reform. Relations within the coalition are unlikely to be smooth sailing due to their wildly diverging ideologies.

The new PM promised that the coalition would carry out a full four-year mandate. "Every Bulgarian lev spent by the executive will have to pass the criterion of zero tolerance for corruption," said Petkov. Each minister will appoint their own team and deputy ministers, while regulators will be strengthened to exercise effective control over the ministries' activities. In addition, the chairs of parliamentary policy committees will not be from the same quota as the minister of the ministry responsible for that sector.

Here is an outline of the core propositions in the coalition agreement and the biggest challenges facing the Petkov cabinet.

When President Rumen Radev gave Mr Petkov the mandate to form a coalition, he put a clear focus on the need for judicial reform. "If you do not achieve decisive changes in the prosecution and the administration of justice in the first 100 days, the coalition cannot win the battle for Bulgaria's future. The rule of law is the most important battle on which all others depend," Mr Radev said and outlined the fight against poverty and inequalities and the defence of Bulgarian national interests abroad as the other primary goals before the new cabinet.

The first priorities of the coalition will be to stop the rise in electricity prices so that they do not go up from January 1 for household consumers. "We can't shut down the economy every few months, so vaccination levels will have to rise dramatically," Mr Petkov added and pledged to personally orchestrate the vaccination campaign. The law on the anti-corruption agency will be another important priority and will represent the "first steps towards attaining the justice that the public expects."

"Our idea is to reduce the administrative burden on business and people. There will be no net increase in the number of employees. The ministries have increased with only one goal - higher and more efficient management of the state," Mr Petkov concluded.

The Cabinet: A diverse bunch

So who is in the "A-Team" of specialists, as per Mr Petkov's own words from several weeks ago? There are many proven specialists in the new cabinet, for sure, but also questionable faces - especially in the BSP and TISP quotas. First of all, we turn to

WCC: (Almost) all that is important

Assen Vassilev returns to lead an enhanced Finance Ministry after his skyrocketing political advance started there in May this year. This time, he will have a lot more responsibilities, though, as the coalition agreement has shifted key functions from other agencies into his hands.

For example, there will no longer be a separate deputy Prime Minister responsible for EU funds (like Tomislav Donchev in the GERB cabinets and Atanas Pekanov in the last caretaker cabinet). These responsibilities are now Mr Vassilev's, whose team will be coordinating the incoming EU funds, especially the 6.6 billion euro Recovery and Resilience package. In the next four years, it is anticipated that more than 25 billion euro will pass through the ministry - in the best case scenario, Mr Vassilev's role would be to ensure they are properly distributed. In the worst case, this centralization might lead to greater corruption risks.

Kalina Kostantinova, a young sustainable development expert and head of Mr Petkov's cabinet in the Economy Ministry, will become Deputy Prime Minister responsible for good governance and administrative reform. There will be no separate ministry created, though, and instead she will be responsible for several directorates that are part of the Council of Ministers but will now be linked to her portfolio.

Daniel Lorer, who was rumored to be Foreign Minister, will instead head a brand new ministry - of Growth and Innovation. The former startup fund manager (who created BrightCap Ventures in 2018) will be managing the EU competitiveness program (2021-2027), the Fund of Funds and the business grants from the EU Recovery fund, a combined portfolio of up to 1.8 billion euros. He will also be responsible for the newly created Science Research and Innovation agency (which will manage over 800 million euro of national and EU funding over the next nine years), as well as the controversial Bulgarian Development Bank, which has been known as the "oligarchs' coffer" until recently.

The next ex-businessman aboard Mr Petkov's team is the founder of Bulgaria's largest courier company, Econt, Nickolay Sabev. He will head the Transport Ministry and has promised to advance reform in some of the rustiest state companies, such as the National Railways (BDZ).

Assena Serbezova will head the Healthcare Ministry. She has been president of the Bulgarian Pharmacist Union, an organization of 7,000 chemists from across the country. Before that, she led the Bulgarian Drug Agency. She has a good reputation in the sector and is known for several heavyweight fights with other institutions, including the State Prosecution, over her warnings of drug shortages during the first months of the pandemic. Her first tasks will include revamping the emergency response services, improving the working conditions of medics and increasing healthcare funding. Before all that, however, she would need to carry out a more successful vaccination campaign than her predecessors.

Three ministers from the caretaker government of Stefan Yanev will remain part of the regular one. Boyko Rashkov will remain Minister of Interior and will likely continue "deconstructing" the legacy of GERB in the enforcement organs. Nickolay Denkov will continue as Education Minister and caretaker Prime Minister Stefan Yanev, a former General, will head the Defense Ministry, where he will have to fight for continuous funding for the long-postponed rearmament programs for the military.

Lastly, 31-year old actor Atanas Atanassov was surprisingly chosen to head the Cultural Ministry. The US-educated, Berlin-based actor is mostly famous for his self-organized initiative to revive the cultural center of his grandparents' village cultural center, but will now have to work in one of the most difficult - and hard-hit by the pandemic - sectors in the country.

Socialist leader Kornelia Ninova turned an electoral disaster into a somewhat significant victory for her party - and herself. She will take over half of the old Economy Ministry, now called the Ministry of Economy and Industry, as a deputy Prime Minister. The new institutions would be mostly controlling various state-owned enterprises, like the military factory Terem. Ms Ninova has bitter experience in a similar position - she was a deputy Minister of Economy in 2005-2007, when Delyan Peevski took over Bulgartabac and her fellow socialist party member (and current nemesis) Georgi Gergov took over full control of the Plovdiv Fair. Ms Ninova was fired from the post due to alleged corruption by former BSP President Sergey Stanishev.

Another new minister from BSP - Ivan Ivanov, who will head Agriculture, is no less controversial. He has been an MP for over a decade, but was once revealed as having worked in a local branch of the SIC group in the 1990s, an insurance company that was the official arm of an organized crime group. Probably not surprisingly, all the important agencies and departments in the Agricultural Ministry will be moved under Mr Petkov's auspices. BSP also takes the Labor Ministry, which will be led by ex-MP Georgi Gyokov and the Tourist Ministry, to be headed by Hristo Prodanov.

The party of showman Slavi Trifonov is the other one with strange appointments. For example, it takes the important Regional Ministry - which controls a significant portion of the funds responsible for road and water infrastructure (3.4 billion euro annual budget). Its head will be Grozdan Karadjov, a telecom expert and ex-member of Parliament from the Reformist Block (2014-2016).

The Foreign Minister will be Teodora Genchovska, previously a senior bureaucrat in the Defense Ministry (head of the NATO and EU relations department). She will have to find a way to revive dialogue with N. Macedonia, as pressure from the US and the EU is mounting. She will also have to balance between the pro-Russian BSP and the rest of the coalition members on the topic of relations with Moscow, and will have to improve relations with Turkey - which were single-handedly managed by former Prime Minister Borissov himself.

TISP also gets the Sports Ministry (to be led by sports lawyer Radostin Vassilev, and the crucial Energy Ministry, to be headed by Alexander Nickolov - another former senior bureaucrat in the same ministry. He is mostly unknown to the public, as most of his career is in the corporate sector, but he will have to take serious short-term actions to fix the rising prices of energy for consumers and business, and a need to find an overall long-term fix for the struggling energy sector.

Lastly, the right-wing liberal coalition is taking three ministries, including a brand new one.

Borislav Sandov from the Green Movement is taking over the Environmental Ministry and the deputy Prime Minister seat for Climate Change. He is a popular green activist and has backed various protests against fracking, nuclear energy and burning fossil fuels. It remains to be seen how he will fit in with the business-oriented approach of WCC and the industry-oriented approach of BSP.

IT expert Bozhidar Bozhanov will head a new institution - one dedicated to digitalization and e-governance. He has been a vocal advocate for full digitalization of the administration and has consulted several previous cabinets on the matter, and will now seek to converge all previous partial efforts to introduce e-governance in the country.

Finally, lawyer Nadezhda Yordanova takes over the Justice Ministry - the institution that will have to pass the much-needed justice reforms that have been in the center of DemBG's platform. These would include introducing oversight of Prosecutor General Ivan Geshev, restructuring the anti-corruption agency to ensure its effectiveness, and, generally, improving the quality of justice in the country.

It will include ten ministers and deputy Prime Ministers from Mr Petkov's WCC, four each from the "bigger" coalition partners, BSP and TISP, and three from Democratic Bulgaria (DemBG) and is based on an unprecedented 140 pages-long coalition agreement that specifies concrete policy objectives, cooperation in the legislature and how appointments in the high offices of power will be managed.