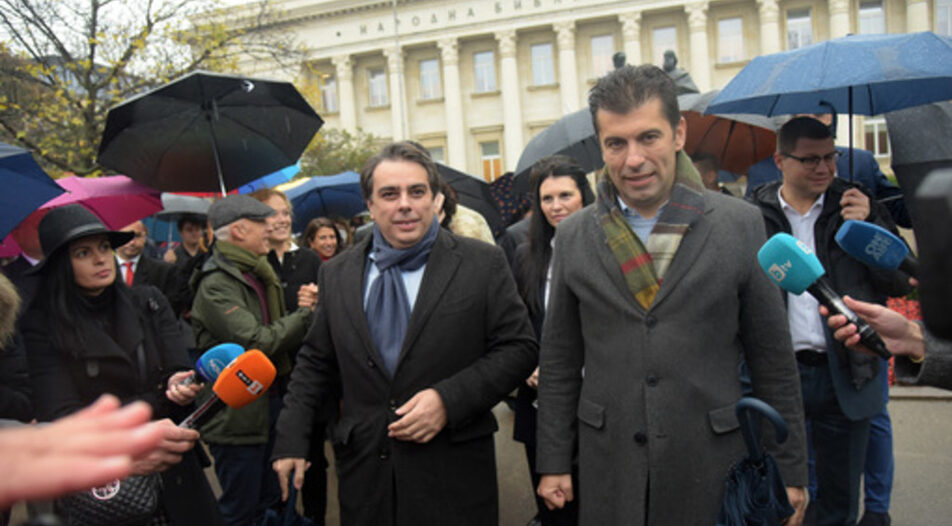 A bitter-sweet victory, growth slows, how much does a supercomputer cost

A bitter-sweet victory, growth slows, how much does a supercomputer cost

The new wave is here, a Presidential battle looms, air traffic is up

Blair and Brown. That is one analogy that comes to mind when hailing the winners in the new Bulgarian elections - Harvard-educated Kiril Petkov and Assen Vassilev.

The dynamic duo of British politics in the late 1990s was made up of the wildly charismatic Tony Blair and the master of detail, Gordon Brown. They managed to find a "Third Way" and mobilize large swathes of the electorate to vote for them, three times in a row.

Legacy aside, superficially, Petkov and Vassilev share the same dynamics. One is all charisma and charm, the other - more cerebral and punctilious. With the right timing and historical momentum on their side, they managed to surmount the present mess that is Bulgarian politics.

Yet this is just a start.

The first big test is coalition building. If you think it will be easy, you have not followed Bulgarian politics in the past year and you don't know how vicious grudges can be.

Take Kornelia Ninova, for example. The BSP leader is bitter - and with good reason. WCC "stole" at least a tenth of her party's votes, which crumbled to a mere 266,000. Following internal pressures to quit as leader of Bulgaria's oldest active party before she kills it completely, she might decide to sabotage coalition talks as well. After all, she's nothing left to lose.

This will put a spoke in the wheel of coalition talks, and potentially destroy the little remaining hope for a government that can dismantle the GERB-MRF status-quo.

BSP, despite only winning 26 mandates after last Sunday's vote, remains integral to the coalition-building efforts.

WCC not only robbed Ninova of votes, it also won President Rumen Radev's blessing. Although Mr Radev won the 2016 elections on BSP's ticket, the relationship between him and the party - and especially its leader - has always been complicated. Now, Ms Ninova openly blames him for creating "a new presidential party" (WCC) and refused to confirm if she would back him in the presidential race run-off this Sunday.

This is not good for Mr Radev, who will need all votes to win reelection. While his popularity remains extremely high (he won almost 50 percent of the votes in the first round), there is still a chance he could lose against GERB's Anastas Gerdjikov.

This might give a fighting chance to Mr. Borissov who still harbors dreams of returning to power and stopping the change (as he himself has declared). All in all, GERB are down, but not out. Yet.

As we wrote above - the final result is not a shoo-in at all for the incumbent. A combination of even lower turnout, complacency among Mr Radev's voters, alongside mass activation of GERB and MRF support for his opponent Mr Gerdjikov, especially in Turkey, might still cost Radev victory. Talking about votes coming from Turkey - the elections there turned into an international scandal, with both Interior Minister Boyko Rashkov and the MFA reprimanding Ankara for supporting "certain parties and candidates" through official organs and the media in the first round.

Talking about elections, this is the final result of the Parliamentary ones, with 100 percent of votes counted.

The big winners are obvious - WCC of Assen Vassilev and Kiril Petkov, who entered parliament just two months after they launched their movement with over 25 percent support.

The minor winners are MRF, which mustered its loyal diaspora living in Turkey for the first time in several years, GERB - which retained its positions, and Vazrazhdane - the radical anti-EU/NATO party that also captured the anti-vaxx line in the past 18 years and finally made it into parliament.

While they will probably remain marginalized, we know from experience that giving far-right movements such a high platform can wreak a lot of damage in itself.

We already mentioned BSP, which has lost almost half its vote since April, and will have the smallest parliamentary group it has ever had. But two other parties were hit even worse than the socialists by WCC's rise - TISP of Slavi Trifonov, which last Sunday lost a colossal 60 percent of the votes it won in July, most of which went to WCC, and Democratic Bulgaria (DemBG), which also halved its score, largely to the benefit of the new party.

A chance in defeat

That catastrophic performance might have a silver lining - TISP party leader Mr Trifonov seems to have buried the war hatchet vis-a-vis the other parties and is no longer dictating terms. He said he will "do whatever is needed" to enable a working cabinet of change. DemBG is also licking its wounds and quickly entered dialogue with WCC, while its leaders all announced their resignations.

This was announced by Kalina Konstantinova from WCC on Thursday. It is expected that the three parties invited to the talks - BSP, DemBG and TISP - will bring experts on various topics to agree on a set of priorities for a common program. WCC co-chair Kiril Petkov promised that the talks will be streamed online so that the general public can follow them freely. This is a refreshing gesture of transparency, but can always backfire if squabbles between the participants emerge.

Bulgarian economy slows to a trickle

The country fell to last spot in the EU for GDP growth with 0.4% in the last quarter. The average for the Union is 3.4%.

The race for a billion

On Monday, Bulgaria placed another T-bonds worth 500 mln levs and this is how the total amount of issued government securities since the beginning of the year reached 3.3 billion levs. This time the offer was for shorter-term 3.5-year bonds and the issue was more successful. However, the achieved yield of 0.13% is above the yield on which Bulgarian securities with similar maturity were traded on the international markets and practically subtracts the entire yield curve of the country above zero.

The government approved another 250 mln levs to be added to the scheme 60/40 with the aim of saving the jobs of 65 thousand workers and employees. The total amount of benefits paid to employers under the scheme 60/40 from its introduction on March 30, 2020, to the end of September this year is 1.5 bln levs for 13.3 thousand employers.

Is Bulgaria's trade deficit for September, down from 202 million euro in the same month of 2020.

Are the exports of Bulgarian goods in September - a 26 percent increase on an annual basis. Imports for September amounted to 3.270 billion euro, up 24.5 percent year-on-year.

The number of tech-related professionals employed by the 100 largest IT companies in the country, according to a report by CBN Pannoff, Stoytcheff & Co.

Energy and insurance holding group Eurohold Bulgaria bought another 21% of CEZ Distribution for 119 mln levs. The purchase is a result of a mandatory tender offer to the minority shareholders in the distribution company after the insurance holding acquired CEZ's Bulgarian operations for 335 mln levs this summer.

The state will increase the capital of Sofia Tech Park by 3.8 mln levs, the government decided during its meeting on Wednesday. The funds will be used to cover operating costs and maintenance for the Bulgarian petascale supercomputer, delivered last year. Sofia Tech Park's capital is currently 85.3 mln levs, as the Ministry of Economy owns 89.19% of the shares directly and the rest through the State Consolidation Company.

The first bomb for the new government is ticking

The state energy regulator is planning to raise household electricity and heating prices by 20 to 30% from January. This is not inevitable and can be postponed but the regulator has refrained from doing so, albeit doing it several times for the GERB government. Expect troubles after New Year.

Coal plant Maritza-Iztok 2 is still in the red

Even though prices on the market have been going crazy, the power-plant keeps losing money - 182 million levs (more than 90 million euro) for the first 9 months of the year. In 2020, when it was working way less, it was operating at a loss of 191.4 million levs. Finding a future for this one will be rather hard.

The young and progressive Socialist who might decide to run for BSP leader. He has been a lonely voice for judicial reform in the party and does not follow the conservative, Orbanist line that Ms Ninova has been imposing over the party.

The third in command in WCC, a long time financier and venture capitalist, has been discussed as a possible candidate for Foreign Minister. N.Macedonian representatives didn't do themselves a favor, by braпding him "a Jew with a knack for negotiations".

Who takes on the largest telecommunications provider, Vivacom. Practically, Mr Andreev shifts positions within one and the same holding - United Group - which also controls the largest media group in the country - Nova TV, where Nikolay Andreev has been a director.

21 November - the second round of the Presidential vote.

The neighboring country played a heavy role in the first round of elections, with officials there campaigning for the MRF party. Now it seems, the Turkish minority party wants to repeat the trick and get Anastas Gerdjikov elected.

No words (of the week) can express how Svetoslav Ilchovsky, the larger than life farmer, who testified against Boyko Borissov' government in Parliament, celebrated fall from grace of the GERB leader. He did it in quite some style, by personally singing a ballad which he called "A requiem for the trashiest of all trashes" alongside a Roma orchestra. He sings:

"Goodbye Boyko, the brig awaits you/ and you deserve it/ you stole gold, euro, business/ and destroyed your people"

Blair and Brown. That is one analogy that comes to mind when hailing the winners in the new Bulgarian elections - Harvard-educated Kiril Petkov and Assen Vassilev.

The dynamic duo of British politics in the late 1990s was made up of the wildly charismatic Tony Blair and the master of detail, Gordon Brown. They managed to find a "Third Way" and mobilize large swathes of the electorate to vote for them, three times in a row.