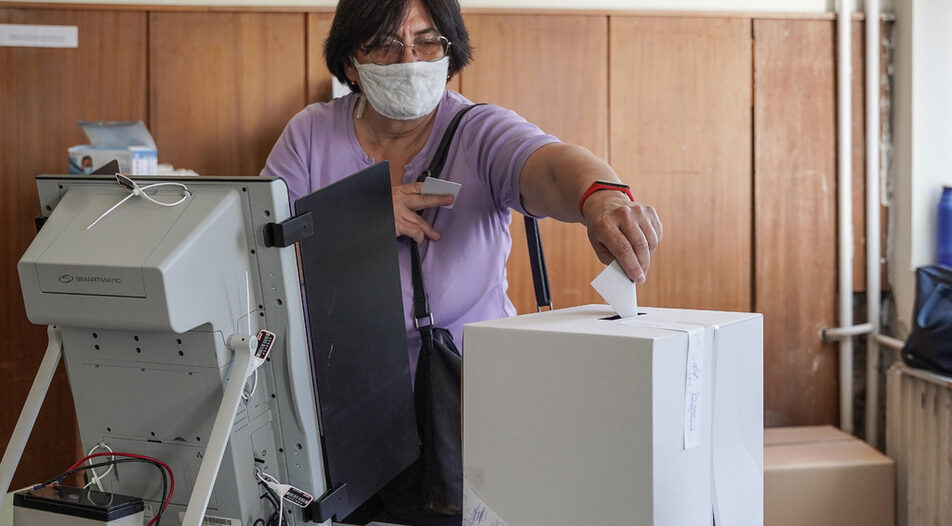 Third time lucky? Bulgaria goes to the polls yet again

Third time lucky? Bulgaria goes to the polls yet again

This Sunday’s Parliamentary and Presidential elections will either break the political stalemate in the country, or deepen it beyond any solution

On Sunday, 14 November Bulgarians will go to the polls for the third time this year, after two fragmented and polarized parliaments failed to produce a working government. The 2 in 1 nature of these imminent elections, combining the Parliamentary and Presidential votes, is likely the only factor quelling voter fatigue this time around. The campaigns, both for President and for MPs, were mostly stale and unimaginative, the sole exception being the freshly launched We Continue the Change movement, which toured Bulgaria and is gathering steam quite fast.

The political showdown comes at a crucial moment for the country, which is battling a third wave of Covid-19 that renders over 150 fatalities daily, galloping electricity prices, rising inflation and a critically delayed EU Resilience and Recovery plan that is supposed to bring in fresh cash for the struggling Bulgarian economy. Bulgaria, in other words, is reaching the limits of what a caretaker government can do.

Yet a new, regular one might not be around the corner. While the outcome of the Presidential race is pretty certain, the General Election will likely produce another fragmented, but also reshuffled, National Assembly.

The relative strength of the players who eventually make it past the four percent barrier will decide whether the country will continue on its path of ousting the captured state model established by GERB and MRF. Or, on the contrary, if it will relapse into a state of "stabilocracy", with the status quo of the previous decade regaining all positions it lost in the past six months.

The Presidential vote: A one-horse race, after all

At the beginning of the Presidential campaign, the entry of GERB-backed academic Anastas Gerdjikov and Democratic Bulgaria-supported judge Lozan Panov seemed to have fired up the contest against Bulgaria's most popular and trusted politician, President Rumen Radev.

In reality, it seems that Mr Radev will win a second mandate without much trouble at all. His opponents proved to be less imaginative than expected and the incumbent strategically dodged any public debate (making the already lackluster campaign even more enervating) in order to play it safe. Even the decision of the health authorities appointed by Mr Radev to introduce the "Green Certificates", restricting entry into some public places for the unvaccinated, does not seem to have eroded his support of 45+ percent in the first round of the elections, as predicted by the latest surveys.

Advertising
Polls, however, also reveal that Mr Radev is unlikely to win outright in the first round because his support took a slight hit after the new anti-epidemic measures. He needs 50 percent of the vote, plus one additional vote to win, as well as turnout above 50 percent, which is far from certain in the current epidemic conditions, voter apathy and increasingly colder weather.

Can all his opponents unite in the second round in an attempt to topple him? Extremely unlikely.

While MRF said that it will back whichever candidate opposes Mr Radev in the second round, their votes would likely be insufficient to get Mr Gerdjikov elected. Mr Panov, who largely led an anti-Radev campaign, announced in the end that he would still support the candidate who is not backed by MRF. Also, traditionally, voter turnout in the second round is lower because voters don't like going out to back someone other than their preferred candidate. So Mr Radev has little reason to worry about his reelection.

The Parliamentary vote: Status quo faces off the "parties of change"

The General election will certainly be the one with the higher stakes. While most parties appear exhausted from this year's endless electioneering, everybody has a lot to win - and lose - in the 14 November vote.

This is GERB's last chance to ride back on a white horse before its extended period in the wilderness loosens its grip on informal networks within key state institutions and agencies. The same applies to MRF, which is already largely ostracized by most other factions. In any case its role as a "grey eminence" is waning. On the other hand, the "parties of change" such as WCC and Democratic Bulgaria have to keep the momentum going if they want to dislodge the entrenched interests of the other two parties.

One thing is certain - the third vote of the year will produce another highly fragmented National Assembly. Six parties will certainly enter, while two - Stand up Bulgaria and Vazrazhdane - are close to the 4% threshold, but it is not certain they will be able to pass it.

The latest surveys show a total collapse of showman Slavi Trifonov's populist TISP party, which won the July vote with a slight margin over ex-Prime Minister Boyko Borissov's GERB. Most surveys predict Mr Trifonov's party will fall to third or fourth position, but the latest poll by Market Links gives TISP only 9.7 percent of the vote. This will make it the smallest party in Parliament - a price they might have to pay for their failure to form a government over the summer and their tendency to cause scandals in the two short-lived parliaments over the last six months.

It appears that the big winner from TISP's demise is the newly established movement of the two Harvard-educated ex-caretaker ministers Assen Vassilev and Kiril Petkov. The two were quick to establish their We Continue the Change (WCC) movement, lure young professionals and businesspeople into its ranks, and they boosted their support by making a tour of Bulgaria.

Pollsters not only see an increase in the declared support for the new movement, but also say that WCC has the highest chance of attracting the votes of undecided voters, which might give it an additional boost. The "Canadian citizenship" debacle involving Kiril Petkov has not cost WCC many votes, according to polls released after the decision of the Constitutional Court. On the contrary - the new faction has only consolidated its support.

All other established parties - GERB, MRF, BSP and Democratic Bulgaria - have not engaged in campaigning as actively as in the previous two elections, relying instead on their core support. GERB retains its voter base and will likely win the election, but remains just as marginalized as in the last two parliaments. The only way for the party to form a government would be with the support of MRF.

There are already signs that relations between the two factions are thawing. MRF mogul Delyan Peevski, again running for MP, has been actively meeting with GERB mayors across the country. Mr Peevski seems to have gained full control of MRF, as the party backs him unequivocally and in defiance of the Magnitsky Act sanctions imposed on him earlier this year.

Who will form a government?

While GERB and MRF remain highly influential, it would be impossible for the two to form a government by themselves. So far, all other parties have refused the possibility of supporting a cabinet of either GERB or MRF. This means that a more likely coalition will be formed around the new big player - WCC.

Mr Petkov and Mr Vassilev are much more pragmatic and open to dialogue than TISP were in the previous two parliaments, so it is highly likely that they will manage to negotiate a wider coalition involving BSP, Democratic Bulgaria and, potentially, TISP or Stand up Bulgaria (if it enters Parliament).

Such a coalition would likely emphasize anti-corruption, increased social support and economic recovery. It would also push forward the EU Resilience and Recovery plan, which is expected to bring in 6 billion euro of fresh funding to the Bulgarian economy. However, all of these parties remain ideologically polarized and, even if they manage to accommodate each other, will have a hard time remaining together in the long term. The anti-GERB glue is weaker than they thought, as the last six months of failed government negotiations demonstrated. The big question is - would it hold so that Bulgaria at least gets through a rough winter?

On Sunday, 14 November Bulgarians will go to the polls for the third time this year, after two fragmented and polarized parliaments failed to produce a working government. The 2 in 1 nature of these imminent elections, combining the Parliamentary and Presidential votes, is likely the only factor quelling voter fatigue this time around. The campaigns, both for President and for MPs, were mostly stale and unimaginative, the sole exception being the freshly launched We Continue the Change movement, which toured Bulgaria and is gathering steam quite fast.

The political showdown comes at a crucial moment for the country, which is battling a third wave of Covid-19 that renders over 150 fatalities daily, galloping electricity prices, rising inflation and a critically delayed EU Resilience and Recovery plan that is supposed to bring in fresh cash for the struggling Bulgarian economy. Bulgaria, in other words, is reaching the limits of what a caretaker government can do.