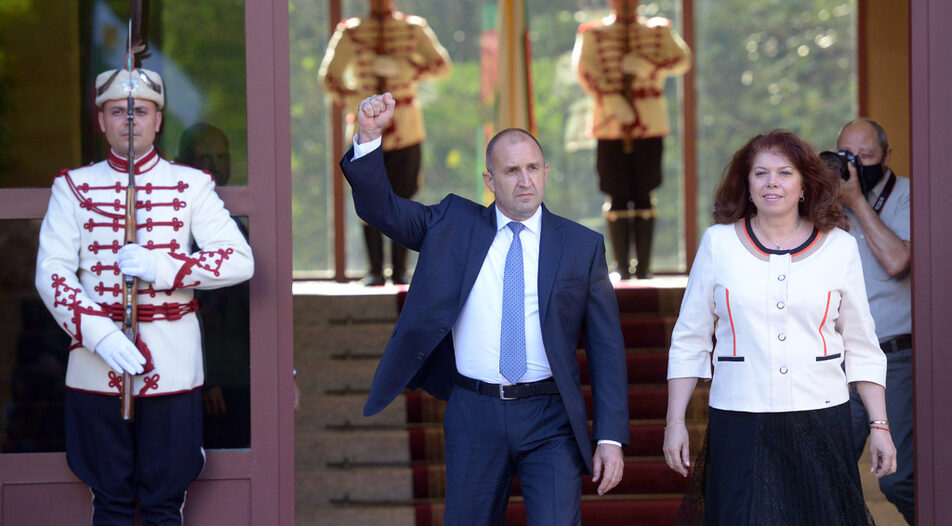 Who wants to be a President? A short guide to the main contenders

Rumen Radev, who became f is posed to win - at least the first

Who wants to be a President? A short guide to the main contenders

The entry of Anastas Gerdjikov and Lozan Panov into the race created some intrigue, but the real dangers to Rumen Radev’s reelection are the Covid crisis and rising energy prices

Rumen Radev, who became f is posed to win - at least the first

Until a few weeks ago, President Rumen Radev lacked any serious rival to stand in the way of his reelection as Head of State, due on the same day as the early Parliamentary vote on 14 November. Then, three of the larger parties - GERB, which ruled the country until April, Democratic Bulgaria (DemBG) and MRF - announced they will back other candidates.

These nominees are Sofia University rector Anastas Gerdjikov, backed by GERB, outgoing Supreme Judicial Council (SJC) President Lozan Panov, backed by DemBG, and, finally, the chairman of MRF, Mustafa Karadaya. Notably, the first two candidates are standing as independents. Although they have long been linked to the respective parties that support them, they are not their representatives (just like Mr Radev was vis-a-vis BSP in 2016), and keep them at arm's length.

So, who are the main contenders to become Head of State, what are their chances and what are the likely scenarios for the 14 November vote?

Let us kick off with acting President Rumen Radev. He has a lot going for him - the support of half of the parties from the previous Parliament (BSP, Stand up BG and TISP), as well as that of the new big dog in town - the movement of former caretaker ministers Kiril Petkov and Assen Vassilev We Continue the Change. He also remains Bulgaria's most popular politician; only he and Prime Minister Stefan Yanev still bask in approval ratings above 50 percent.

Mr Radev has been popular throughout his entire mandate since he was the only person in power to criticize (albeit ineffectually) the ruling status quo in the executive and the judiciary. He reached the peak of his popularity when GERB and Prosecutor General Ivan Geshev - who Mr Radev reluctantly approved for the position - pursued him from the beginning of 2020 onwards. When the State Prosecution entered the Presidency in July last year under the premise of investigating a potentially corrupt aide of Mr Radev, this sparked a huge cross-party protest against Prime Minister Boyko Borissov and Mr Geshev, which the President openly supported.

Despite mass protests and calls for resignation, Mr Borissov persevered in power until the end of his mandate in April 2021, but then failed to convincingly win the Parliamentary vote. Mr Radev appointed a caretaker government led by Stefan Yanev, which immediately skyrocketed in popularity by exposing its predecessor's corrupt practices.

As you see - Mr Radev looks like the winning horse. So, can anybody beat him? While other candidates have their chances, the only real threat to the reelection of the acting President is Bulgaria's increasingly precarious state. The failure to improve vaccination rates significantly and the resulting repetition of last year's autumn health crisis, combined with increasing energy prices and constant sectoral protests, could cost Mr Radev support on 14 November.

Additionally, the support of the four parties - that are also competitors for votes in the Parliamentary vote that will take place alongside the Presidential one - is already causing a commotion. BSP, which originally nominated Mr Radev in 2016, is jealous of the rising popularity of We Continue the Change - a party that is seen by some as "the President's party". Hence Mr Radev may not automatically secure the votes of the supporters of all four parties.

The main contender: the Professor

Indisputably, the candidate with the greatest chance of reaching the second round and challenging Mr Radev is Sofia University rector Prof Anastas Gerdjikov. A classicist by education and always, until now, maintaining an arm's length from electoral politics, Mr Gerdjikov seems like the optimal candidate for GERB. Party loyalists will certainly support him and also, due to his non-partisan position, he is capable of attracting outside support from those who admire his erudition and calm, academic aura.

While other candidates have their chances, the only real threat to the reelection of the acting President is Bulgaria's increasingly precarious state

At the same time, he is far from uncontroversial. He headed the Scientific Research Fund, an institution tasked with distributing public money for science, during the time it was practically blocked (2008-2009). And, instead of research, it sowed controversy. Several scandals about how Sofia University spent its money during his term in office immediately resurfaced when Mr Gerdjikov announced his candidature. And he used to be part of the "Novoto vreme" foundation, a bank of cadres that filled ministries and agencies during the time of the Simeon II government (2001-2005), most of whom have party-hopped throughout the past 20 years.

But if we need to single out one reason why Mr Gerdjikov would really struggle to defeat Mr Radev, it can be summarized like this: In a still predominantly anti-GERB environment, the academic is attempting to oust Mr Radev by using soft, diplomatic language. This is unlikely to work - Mr Gerdjikov is reluctant to take a clear stance on issues such as corruption and the capture of the judiciary. He refuses to name any allegedly corrupt politicians (as he is nominated by some of them) and tries to play the pacifying, unifier card - which can be an overplayed hand. His only real chance is to attract the votes of MRF and Lozan Panov in the second round and hope to ride the potential waves of public anger against Mr Radev due to the Covid and energy crises.

The second candidate that was supposed to pose a serious challenge to Mr Radev by attracting the democratic vote is judge Lozan Panov. The outgoing head of SJC seemed to have all the qualities and credentials of a solid contender to Mr Radev. He is a respectable judge who got nominated by the status quo to lead the SJC, but turned against them. In reality, he is the first high-ranking magistrate to call out political interference in the justice system. He is also well-spoken and an active voice for judicial reform.

Yet, so far his nomination shows that even the best candidate on paper can turn out to be a disappointment in practice. Initially, Mr Panov was thought simply to be too much of a Sofia-centered candidate who would only resonate with voters who worry about justice reform. Two weeks into the campaign, and this concern has been overshadowed by his other blunders. He kicked off with a series of mishaps. His introductory video on national TV looked absurd - it showed Mr Panov talking for three minutes about justice against a background that looked like a WIndows 98 loading screen.

Then he chose to focus his attacks on President Radev, completely ignoring the GERB candidate. He even called for Mr Radev's impeachment over Kiril Petkov's anti-constitutional appointment. This campaigning strategy is likely to backfire massively, as most Bulgarians continue sympathizing with the acting prime minister and see GERB as the greater evil. Unfortunately, Mr Panov's campaign might inadvertently harm the movement that backs him, DemBG, rather than boost their support.

The final two candidates that deserve honorable mentions are the leaders of ethnic Turkish party MRF, Mustafa Karadaya, and Kostadin Kostadinov of the anti-EU party Vazrazhdane ("Revival"). They may be complete opposites, but they have both been nominated for similar reasons - to boost their respective parties' support for the parallel Parliamentary vote.

Mr Karadaya is the first party nomination for Head of State in MRF's three decades' long history. It is also the first time the movement has nominated an ethnic Turk for the position. The candidature of Mr Karadaya is important for two main reasons. First, it is designed to bolster the ethnic vote that MRF traditionally enjoys. The party, a top three parliamentary force over the past 20 years, has been losing momentum in the last two elections. Hence its position as a kingmaker in Bulgarian politics has been undermined.

Secondly, by putting its leader forward, MRF aims to maximize the support the party will receive and propel it into the second round. This is a traditional tactic by the movement. Yet the big question is - does its support matter anymore? In a tightly contested election, the weight of the third biggest player is significant. But in a likely one-horse race, in which Mr Radev is easily the favorite, this will not apply.

Mr Kostadinov's nomination is ostensibly gesture politics in that his extremist party is not in the mainstream. But, in light of recent events, it does carry a wider significance. It will show how many Bulgarians view the current Covid restrictions imposed by the authorities as a red line. Will Mr Kostadinov (and hence Vazrazhdane) provide the big anti-establishment surprise in this election? We will know in two weeks' time.

Until a few weeks ago, President Rumen Radev lacked any serious rival to stand in the way of his reelection as Head of State, due on the same day as the early Parliamentary vote on 14 November. Then, three of the larger parties - GERB, which ruled the country until April, Democratic Bulgaria (DemBG) and MRF - announced they will back other candidates.

These nominees are Sofia University rector Anastas Gerdjikov, backed by GERB, outgoing Supreme Judicial Council (SJC) President Lozan Panov, backed by DemBG, and, finally, the chairman of MRF, Mustafa Karadaya. Notably, the first two candidates are standing as independents. Although they have long been linked to the respective parties that support them, they are not their representatives (just like Mr Radev was vis-a-vis BSP in 2016), and keep them at arm's length.