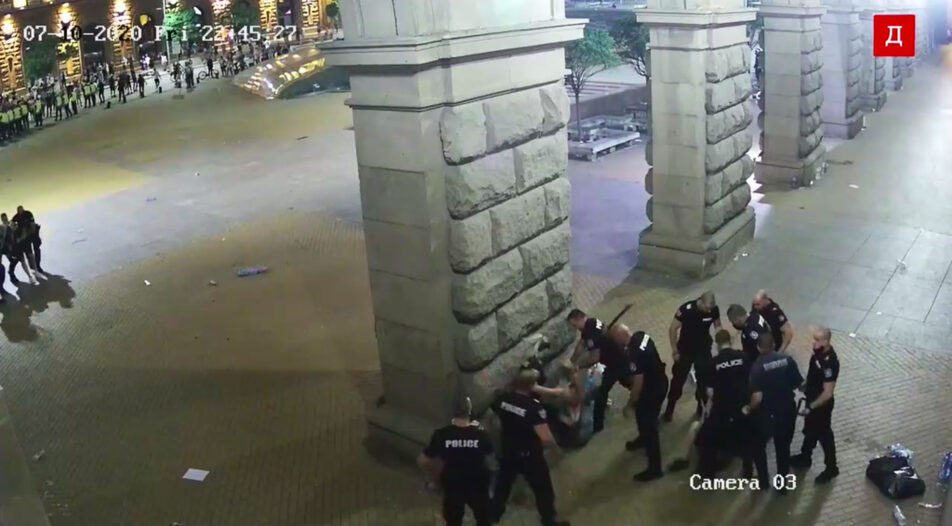 The week: The Belarus summer of Bulgaria, a minister’s Canadian link and a coming new lockdown

The week: The Belarus summer of Bulgaria, a minister’s Canadian link and a coming new lockdown

A joke is doing the rounds these days in Twitter: who is going to form a government first - Bulgarian parties or the Taliban?

Comparing a reasonably democratic country where people don't get killed for their religion and have to negotiate with an extremist regime brandishing Kalashnikovs on SUVs is indeed fun, because the distance between the two seems galactical.

Yet here is another comparison that proves how easily those seemingly distant borders of democracy, human rights, and even freedom might tumble in silence.

Last week in Parliament, a video of severe police brutality against anti-government protesters in 2020 was shown. Several policemen were beating and standing on top of lying and tied-up people, dragged from the protest to a place behind the columns of the government building in Sofia.

It was horrible to watch. But it was more horrible to understand that people in power - the prosecution, the government, in the Interior Ministry - had seen those videos in 2020. They were intentionally hidden and none of the perpetrators was punished.

Which leads to the conclusion, that those in power approved of such measures and were (probably) even condoning them.

We already know that thousands of people were wiretapped (probably even illegally) last year, on prosecution orders, for instigating "a coup d'Etat".

All that while then Prime Minister Boyko Borissov and the media close to the government were claiming that the protest was funded by dirty money and discredited.

In other words, Bulgaria last summer looked a lot like Belarus, even for a brief moment in time.

The fact that we didn't breach that border for long enough and managed to escape the violent path towards dictatorship is a testament to how far along the road to civil endurance Bulgarian society is, as well as to the EU restraining power on a country in which the elite depends on that money.

So I'd rather have some more months of bargaining and political feuds in the open, than a complicit dictatorial arrangements in the shadows.

this week newsletter is helped by

Kiril the Canadian or Cyrilic Kiril

Now here is a drama we bet you didn't expect: does Kiril Petkov, caretaker Economy Minster hold Canadian citizenship in addition to his Bulgarian one? The question was first raised by the biggest party in Parliament There Is Such a People (TISP), which at some point invited Petkov to serve as cabinet minister, and he refused. Petkov says he indeed had held Canadian citizenship but renounced it by submitting a request he wrote himself.

Over 50 MPs - mostly GERB and Movement for Rights and Freedoms (MRF) - asked the Constitutional Court to rule whether Mr Petkov's appointment as caretaker government minister was anti-constitutional, and called for his resignation. The Constitution currently forbids anyone holding an MP or ministerial spot to have dual citizenship. So the question now is whether Petkov was still a Canadian citizen when sworn in office and consequently - are all his actions as minister legally binding?

Keep in mind, this was the most active caretaker minister - he fired the governors of Bulgarian Development Bank and uncovered schemes in several other big state-owned enterprises.

On the funny side, Mr Petkov - until now "mocked" for his US education and called pejoratively Kiro the Harvard, got a new nickname - Kiro the Canadian.

Parties have not shown that much enthusiasm when it came to negotiations to form a cabinet, however. Despite a second round of consultations taking place throughout the week, there seems to be a shortage of people or parties willing to govern. Together, that is.

Those who expressed willingness to try, like Democratic Bulgaria's Hristo Ivanov, can't. Those who can don't want to. "From now on, my dear, we will be your constructive opposition until the sovereign decides otherwise," Slavi Trifonov, leader of There is Such a People (TISP) anti-elite party holding 65 of 240 seats in Parliament, told the "protest parties" in his weekly Facebook post on Wednesday.

Thus he joined GERB, the second largest party in the National Assembly with 63 seats, who declared themselves an opposition force back in April.

This makes 128 seats held by opposition MPs. However, there is no elected government to oppose.

Some work is done at last

On the positive side, almost a month after the new MPs took the oath of office, the National Assembly finally managed to form its 22 permanent committees. "Opposition" TISP got the chairmanship of the most important commitees, including energy, finance, justice, agriculture, health, the interior and foreign affairs. The other "opposition" party, GERB, took the EU affairs, transport, culture and media, and human rights. The last two appointments were shocking, bearing in mind the track record of the former ruling party when it came to media freedom in the country and the recent exposure of video footage of brutal police violence during last year's anti-government protests.

Preparing for the Afghans

A couple of months after Bulgaria withdrew its last troop deployment from Kandahar and a day after it became clear the Taliban are inevitably taking over control of Afghanistan, Sofia is already preparing to welcome Afghan refugees.

Not true, of course. Although participating in the common EU refugee resettlement scheme, Bulgaria is not planning to accept anyone. President Rumen Radev inspected the border fence (built for the previous, Syrian, refugee crisis) and announced it has to be urgently repaired, Defense Minister Georgi Panayotov said the army is ready to deploy 1050 servicemen and 145 machines on the border and TISP leader Slavi Trifonov wrote on Facebook his party would support the caretaker government in its efforts to stop a potential influx of migrants.

With new cases increasing by the day, authorities are discussing when and how to impose the next lockdown. It is probably coming before the end of August even, and it will affect restaurants, bars, events and social gatherings.

It is not yet clear whether students will start the school year on 15 September online or in the classroom. Hopes are that authorities will manage to keep the schools open. Don't count on that too much, though.

was inflation in Bulgaria on an annual comparison basis in July. It was 0.8% on a monthly basis. The main drivers of inflation last month were fuels and utilities.

Or a little over 750 euro was the median salary in June. This was 11.1% above June last year which shows COVID hasn't slowed the pay rise. On a quarterly comparison basis the increase is even larger - 14.1%.

was the amount of foreign direct investment in Bulgaria in the first half of 2021. This is less than FDI attracted in the comparable period of 2020 and is probably a reflection of the COVID impact on transnational capital movements. Also, Bulgaria has been a growing desert for FDI in the past several years.

The German company plans to open a factory for antiallergic duvet covers in Pleven. The Bulgarian subsidiary is already hiring workers, with the headcount planned to reach 300. The investment will be somewhere between 2 and 4 million euro.

The Shumen-based aluminium profiles producer will invest 1.7 million euro in new environment-friendly production processes. The Greener Anodizing for Cleaner Nature process will be finished by the end of next year, with 650 thousand euro coming as a financial grant from Norway.

The Dutch-based group which acquired Bulgarian Telecommunications Company (BTC) and Nova TV in Bulgaria recently, is reached an agreement with Crystal Almond Holdings to buy Greek telecoms operator Wind Hellas. The deal is subject to approval by local regulators and is expected to be completed in 2022.

The man who is about to stop being a minister in the caretaker cabinet is probably about to launch his own party. Judging by posts in the social media, it might be very well received before the next elections.

The ministries of health and education are mulling hybrid attendance measures for the first school day, as new Covid-19 cases reach 1,300 per day.

While those are neither a company, neither a very pleasant view in the mountain, but when it comes to reaching forest fires in an inaccessible terrain, they are your go-to people. Check out these volunteers from the Off-road Club in Velingrad, who constructed a heavy duty fire-fighting truck of their own, help extinguish the fires in the mountains near their town and are now fundraising to construct their second vehicle.

You can get to Dublin from there easily, after Ryanair announced this new twice-a-week service starting in October. WizzAir also begins flights from Plovdiv - to London, Dortmund and Memmingen.

A joke is doing the rounds these days in Twitter: who is going to form a government first - Bulgarian parties or the Taliban?

Comparing a reasonably democratic country where people don't get killed for their religion and have to negotiate with an extremist regime brandishing Kalashnikovs on SUVs is indeed fun, because the distance between the two seems galactical.