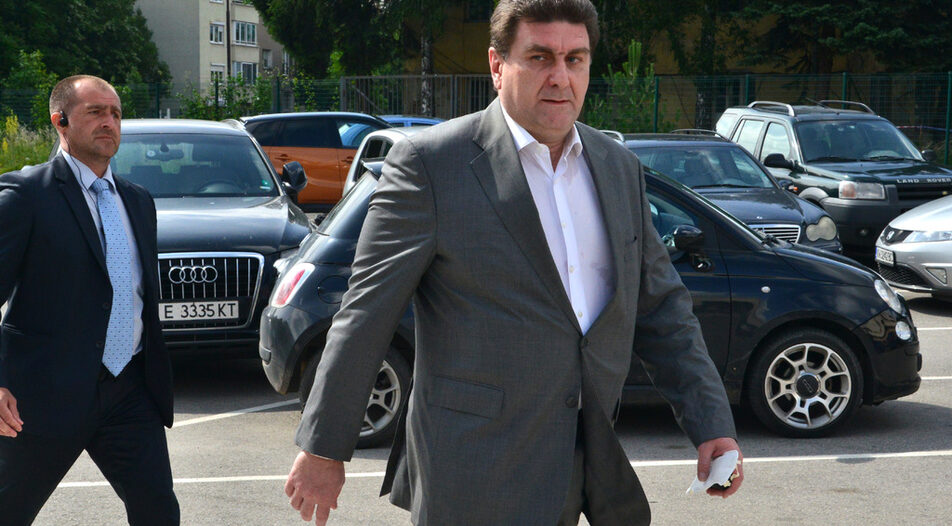 Old faces, new falls from grace and a BMW you can buy cheap

If you had anything to do with the business sphere in Bulgaria over the past 15 years, you will know Valentin Zlatev.

Zlatev used to head Lukoil Bulgaria - the biggest company in the country over the past 20 years (2020 is the first one to see it replaced). He was also a known power-broker, a good friend of Boyko Borissov and a very wealthy man (pictured above).

He is, of course, very closely related to Russian interests in Bulgaria. You could even say that he represented them to a great extent in the recent past. He will do more so in the near future.

After disappearing from the scene over the past 18 months, Zlatev is back. This time - as a gas supplier to Lukoil. His new company buys gas from Gazprom via Turkish Stream and sells it to the refinery.

There is no business case here: they are obliged to do it on a regulated basis, so the only reason for this would be to keep the money in Russian pockets, instead of in the Bulgarian Bulgargaz. It is also a sign of what is to come: Lukoil is the biggest single customer of Bulgargaz and losing it will mean severe problems for the state-owned company. Others might follow, prompted by geopolitics, rather than market logic.

So in a nutshell, Russia is using the pipeline it made Bulgaria build to throw Bulgarian companies out of market while keeping the profits and fortifying its hold over the country. You can read more about that here, but that's a rough summary.

We're using this example to remind you - if the current political turbulence ever prompts you to feel nostalgic for Borrisov's time, bear in mind a long-lasting stability might be worse.

Speaking of turbulence: Parliament is in a stew

And that's the politest way to describe the past political week in Bulgaria (Martin Dimitrov tried to do so here). To cut a long story short, Petar Nikolov - There is such a people (TISP) party candidate for Prime Minister - deposited the names of his potential cabinet members with President Rumen Radev on Friday. Yet the party did not seriously expect this cabinet to be passed. Otherwise, it is impossible to understand the actions of Slavi Trifonov - the only person in the party who seems to matter - who never ceased attacking the potential coalition partners of TISP.

So in the end, no coalition was achieved and Trifonov announced the withdrawal of Nikolov (later confirmed humbly by the man himself). The group definitely did not convene to discuss this beforehand, either - it was a single-handed decision by the "supreme" leader.

What followed was more a cirque than a procedure

The man who broke the deal

The straw that broke the camel's back was the psychedelic TV interview of Petar Iliev - the designated Interior Minister. Just a few days earlier, media inquiries pointed out a possible academic plagiarism of his, so he came to defend his name and nomination on live TV.

If there was ever a PR failure, that was a textbook example.

Iliev was not only arrogant ("ask my grandma and my mother if I have a good character"), but offensive about TISP's potential partners, calling Stand up BG politician Tatyana Doncheva a mafia lawyer, and in the end - just plain hysterical.

If there was ever a grain of doubt that Stand up BG and Democratic Bulgaria would withhold support from TISP's cabinet, ignoring all red flags, it evaporated with this interview (TISP were adamant that Mr Iliev remains their Interior Minister nominee despite his shambolic appearance).

Two winners from this week

The president seems like the last remaining voice of reason and cooperation amid the turmoil. His caretaker government is holding the ship steady and will probably do so for at least another 3-4 months. Additionally, he got a boost from Slavi Trifonov, who announced TISP will back Radev for a second term in the presidential elections this fall.

The former Prime Minister is likely rubbing his hands with glee. Once cornered by the "anti-GERB" parties, he is enjoying their fall. He seemed almost reasonable when he gave a press conference confirming that his party would not use the second mandate to form a cabinet. "We don't intend to enter any negotiations with other parties. We want to stay far away from all those who created this mess," he said on Wednesday, still adding with a pacifying tone that "if we see common sense, we can talk".

The Ministry of Finance announced a competition for new directors in the Fund of Funds. In doing so, the Minister of Finance Asen Vassilev will use the last days of his term in an attempt to change the FNF, an institution he criticized shortly after taking office as part of the caretaker cabinet.

Until now, the FNF was governed by a supervisory and a management board. The structure will now be simplified by introducing only a three-member board of directors, and the term of office of each member will be three years. The application deadline is August 25.

It's also looking for a revision of the budget

But it probably is not going to get it. While Vassilev pleaded with Parliament to vote on the revision and allow spending of more funds for the coming COVID-closures and a fourth wave, there is simply no time left.

Government thinking of new type of state aid for businesses

According to Minister of Labor Galab Donev, the caretaker government is considering introducing a new type of state aid program for ailing businesses. It would be in a 75/0 format and all businesses and self-employed persons will be able to apply if they happen to be under lockdown measures in the event of a new wave of coronavirus cases in the fall.

Industrial production falls for third month in a row

Industrial production decreased for the third consecutive month in June - by 0.1% compared to May. By comparison, a month earlier the decline was 1.4%. The drop came from manufacturing and energy, while mining reported an increase on a monthly basis. Unsurprisingly, on an annualized basis, the indicators show an increase, but a big factor for this stems from the low base from last year.

In April-June this year, Bulgarian banks granted 3,734 housing loans, according to quarterly central bank statistics. Thus, at the end of the first half of 2021, the total number of granted housing loans in Bulgaria increased to over 177 thousand, which, unsurprisingly, are dominated by those with a maturity of over 5 years. Nominally, the number amounts to nearly 13 billion levs. This is a direct reflection of the high activity reported in the real estate market in recent months.

Tourism is alive, kind of

Revenue from nights spent at hotels in June rose to 82.5 million levs, according to NSI data - an expected increase compared to the reported 23 million levs in 2020 when severe travel restrictions were in force. Still, the number remains well below the pre-crisis level of 2019 - 205.4 million levs. The difference is entirely due to (the lack of) foreign tourists.

Food retailer T Market is expanding by renting a new refrigeration base in Bulgaria. The cold storage is located in Sofia and spans 5,000 square meters, has 6,000 pallet spaces and 210 loading and unloading ramps. It offers five temperature regimes designed for deep-frozen and refrigerated goods, as well as for fruits and vegetables. The logistics center is owned by the company Anima Group Investment. Between 8.5 and 10 million levs have been invested in it.

Local courier Speedy plans to distribute a dividend of over 28 million levs. The company convened an extraordinary general meeting of shareholders to discuss two issues. The first is for the distribution of the entire profit for 2020 and part of the undistributed - a total of 28.2 million levs, which makes 5.25 levs per share before tax. The second item on the GMS is to select an auditor of accounts. The General Assembly will be held on September 17.

The National Innovation Fund is again recruiting projects for grants. This is the 12th competition session of the fund, which (like the previous ones) has a budget of about 5 million levs. The application deadline is September 10.

The government is in a bind: electricity prices keep going up, pushing companies to the brink of closure. They even announced protests and asked for resignations in the whole government-owned energy sector. Yet the only resignation they got was the deputy minister of energy, who was also a candidate for minister in TIPS failed bid.

The businessman who buys and sells companies for the past 15 years and prides himself on being a "dealmaker" has been confirmed as the official owner of Bulsatcom - the largest TV operator in Bulgaria.

A British pensioner living in Sliven, devoted to helping animals and raising funds through her foundation. Quite a story, from Gabriel Hershman here.

The first possible date for Presidential elections which may very well coincide with Parliamentary ones too.

...has listed for sale the 2016 BMW 7 (4x4, 449 horsepower, V-type engine) limousine of former bank governor Stoyan Mavrodiev. Apparently Mr Mavrodiev considered the 250,000 euro purchase was thought to be a good investment for a bank that is supposed to fund SMEs.

Trichane is a peculiar and masochistic ritual in some Bulgarian villages, where dogs are hanged on a rope (or between two ropes, depending on the "style") and thrown in a pit of water in order to get "cleansed" of rabies and bad spirits. In popular language the term has become an euphemism for a relentless public attack on someone.

For example, Petar Iliev, TISP's nominee for Internal Minister, used it to describe the "media attack before I get on the ring [of politics]. I am instilling a great fear in the deep state," he told Nova TV. He also used the word "kochina" - pigsty to describe the people who supposedly run the country. But that is an explanation for another day.

If you had anything to do with the business sphere in Bulgaria over the past 15 years, you will know Valentin Zlatev.

Zlatev used to head Lukoil Bulgaria - the biggest company in the country over the past 20 years (2020 is the first one to see it replaced). He was also a known power-broker, a good friend of Boyko Borissov and a very wealthy man (pictured above).