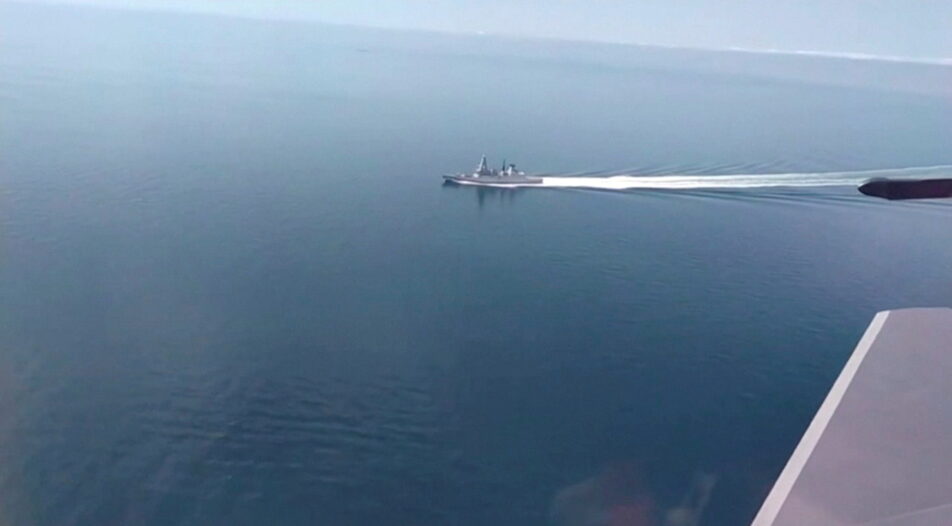 The Week: Troubles in the Black Sea, not a nice time to be a Bulgarian neighbor, Capital sells covers on an NFT auction

The Week: Troubles in the Black Sea, not a nice time to be a Bulgarian neighbor, Capital sells covers on an NFT auction

The Three seas in Sofia; No date for North Macedonia, welcome to the Rhodope mountain train

In September 1854, a combined Franco-British fleet launched from the shore of Varna to invade Crimea. The Crimean War resulted in a ban on Russian military ships in the Black Sea and deep reform to Russian society and military (which later was a factor in triggering the Russo-Turkish war of 1877, liberating the Bulgarians).

This week, another British military ship was wandering around Crimea when Russian forces fired shots and dropped bombs on its way (as you can see in this picture, helpfully circulated by the Russians). Thankfully, it was a long way from the launch of a second Crimean war, yet it is always worth heeding skirmishes in a water basin so small and contested.

In the last decade or so, it has witnessed several conflicts: the Russo-Georgian war and de facto independence of Abkhazia and South Ossetia, and the Russo-Ukrainian war (which was not officially a war, more like a takeover of Crimea). It has also seen large energy projects - Russia ran a pipeline on its seabed to reach Turkey and Bulgaria, and avoid Ukraine.

Just enter "Black Sea conflict" in Google and you'll be inundated with speculation about whether this closed sea will be the next "hotspot" of geopolitical turbulence. Russia is ever more dominant in its quest to control the sea and it's now a frontier between the West and Moscow, as well as with the always unstable Middle East.

Against this background, consider that nowadays only sailing boats and ferries launch from the beaches of Varna, because Bulgaria has only 2 working battleships and they are very old. Once again, after the Ottomans and the Russians, we will rely on others to defend the shore.

But then again, Russia also has other levers in Bulgaria and it has been using them for quite some time - the pipeline under the sea is, admittedly, a big one (for smaller ones, look at the bottom of the newsletter). So it's not like we care a lot about sovereignty, or the troubles in the Black Sea.

What we do care about is beaches (you are welcome to visit). And we've been frying this past week, so expect there to be even less news in the next months if, fingers crossed, everyone keeps calm.

Campaigning has been virtually non-existent in the run-up to the 11 July vote, although just 16 days remain. The absence of political messages, however, doesn't stop voters switching allegiance - several sociological agencies point to the gap narrowing between Boyko Borissov's GERB and Slavi Trifonov's There is such a People party, TISP. Trend agency still gives the party of the ex-Prime Minister a 1,5 percent lead (21,7 to 20,2 percent), while Gallup International has TISP leading by a whisker.

Speaking of the Black Sea, the Bulgarian army finally managed to retrieve the black box of the MiG-29 jet that plunged into the water two weeks ago, killing Major Valentin Popov. Minister of Defence Georgi Panayotov said that the inner shell protecting the recording device is intact. This makes it highly likely that valuable information about the aircraft's last moments might be retrieved and the truth revealed.

Meanwhile, the Serbian Defense Ministry had to debunk the conspiracy theory that started circumventing Bulgarian social media, insisting that a Serbian rocket downed the airplane.

And while we are on the topic of neighbors: N. Macedonia

"Bulgaria has resisted the incredible pressure of our European partners to approve the start of EU accession negotiations by N. Macedonia," president Radev boasted from Brussels on Thursday. He added that the caretaker government he appointed managed to dodge demands for a concrete timetable for negotiations between Sofia and Skopje. So no date is a good outcome, in the current state of affairs.

"Everybody is fed up with Bulgaria's stance on North Macedonia," an EU diplomat quoted by Politico - Europe said on Wednesday. "It is incomprehensible, indefensible and destabilizes the Western Balkans. Bulgaria is losing friends at high speed. Happy is the country that can afford this in the long run."

And if that isn't enough, Albanian Prime Minister Edi Rama joked with his N. Macedonian counterpart that in the end, Sofia might demand Skopje change the name of its country once again to ... Western Bulgaria.

Bulgaria еdges closer to the EU. Or more like the opposite

Bulgarian GDP per capita increased by 2 percentage points to 55% of the EU average in 2020, according to preliminary data from the European Statistical Office. You may be tempted to conclude that living standards improved a bit despite the crisis but that would be inaccurate - in fact, the only reason the country nudged closer to the EU average is because the union's economy shrank more in 2020 than Bulgaria's!

If this rate continues (and the EU's economic growth doesn't accelerate), Bulgaria can hope to rival European average GDP per capita by about 2043-2044. We'll wake you up then!

Down the competitiveness ranking

And we dropped down to 53rd place out of 64 countries in terms of competitiveness, after several years occupying the not-so-prestigious 48th position in the Yearbook of World Competitiveness. It is prepared by the Swiss Institute for Management Development (IMD). This puts Bulgaria in the company of the Philippines and Ukraine and very far from the new leader in the ranking - Switzerland.

In May, the volume of bank loans increased by 6.4% on an annualized basis to 62.5 billion levs, up from a rate of 6% a month prior. This also marks the fastest growth rate since the beginning of the pandemic. Meanwhile, non-performing loans increased on a monthly basis, but by a small amount - about 27 million levs to a total of 4.75 billion levs, according to data from the Bulgarian National Bank (BNB) at the end of May. The deterioration comes from corporate and consumer loans while the volume of bad mortgages is declining.

Five commercial banks will start providing state-guaranteed loans to small and medium-sized companies. They will be able to grant unsecured loans for working capital or investment financing to SMEs for up to 70% of their revenues in 2019 or 2020. The loans will have to be repaid within 7 years, with a grace period of 12 months. There are two additional conditions - the company has to have been profitable for at least one of the past 3 years, and one of the owners has to become a co-debtor on the loan.

The newspaper managed to sell two of its covers at an NFT auction (NFT's are units of data stored on a digital ledger, called a blockchain, guaranteeing that the asset you pay for is unique). The covers depicted the beginning and the end of the "Delyan Peevski" era of corruption in Bulgaria. The buyer paid 2.8212 ETH (ethereums) for both covers.

The meat processing company "Biltrans-Velev" plans to invest 6 million levs in a new enterprise for the production of reindeer ham. The company will apply for funding from the Rural Development Program, which will be opened in September, in order to raise part of the sum. If their project isn't approved, the company will finance construction with loans and company funds.

Media platform Dir.bg is now the majority owner of WnessTV, which focuses on healthy lifestyles. Dir.bg bought 51% of the enterprise Efficiency First Media which manages the channel. The rest of the business is held by the founder of the channel, Ivan Todorov, who will remain the company's executive director. The price of the acquisition was not made public.

The drugmaker, controlled by Domuschievi brothers, is looking to get 300 million euro from the markets for around 10% of the company, which will make it the biggest public company in Bulgaria. The company will go public in Amsterdam and the IPO has started - offers will be accepted until 30 June.

Eurohold's capital increase is drawing to a close

Eurohold has successfully placed almost all rights from its capital increase this week. The company has started the process of raising 100 million euro as part of its plans to finance the purchase of CEZ's business in the country for 335 million euro, to be secured by the end of July. After trading ended it was clear that the total number of rights placed was the equivalent of 96.3 million euro.

The Russophile Movement leader finally goes to court on spying charges. Malinov is accused of spying in favour of two Moscow-funded organizations by writing them a memo on how Russia might gain influence in the country. Kapital Insights has covered the absurdities of this case already, so if you haven't seen them - check them out here.

the Sofia-based building company is once again in the news, after its signature skyscraper project in Lozenets was stopped for good. It was already mired in scandal in 2019 when it turned out a law was changed to allow the construction to happen. Now the Directorate for construction control has said the permit is terminated.

Bulgaria will host the Three Seas Initiative Summit of the leaders of 12 Central and Eastern European countries, as well as an accompanying Business Forum - both under the patronage of President Rumen Radev.

The train in the Rhodope mountain

This is Sabie Djikova, a 65-year Rhodopean who travels twice a day on Bulgaria's last remaining narrow gauge train to sell her family's cows' milk. If you missed the story and pictures about her and the train line by Jodi Hilton - check it out here.

WORDS OF THE WEEK

This is what mogul Delyan Peevski seems to be these days. His father spoke out against him ages ago, but now his mother is also keeping her distance. A month ago he acquired pariah status when he fell under the sanctions regime of the US Magnitsky anti-corruption act. Consequently, the Bulgarian Finance Ministry listed dozens of companies and people it refuses to do business with because of their connections - tenuous or otherwise - to Peevski.

To add insult to injury, however, Mr Peevski's own mother - Irena Krasteva - asked to be taken out from this list, as she has formally not done any business with her son since she donated her newspapers to him a few years back. That's not nice.

In September 1854, a combined Franco-British fleet launched from the shore of Varna to invade Crimea. The Crimean War resulted in a ban on Russian military ships in the Black Sea and deep reform to Russian society and military (which later was a factor in triggering the Russo-Turkish war of 1877, liberating the Bulgarians).

This week, another British military ship was wandering around Crimea when Russian forces fired shots and dropped bombs on its way (as you can see in this picture, helpfully circulated by the Russians). Thankfully, it was a long way from the launch of a second Crimean war, yet it is always worth heeding skirmishes in a water basin so small and contested.