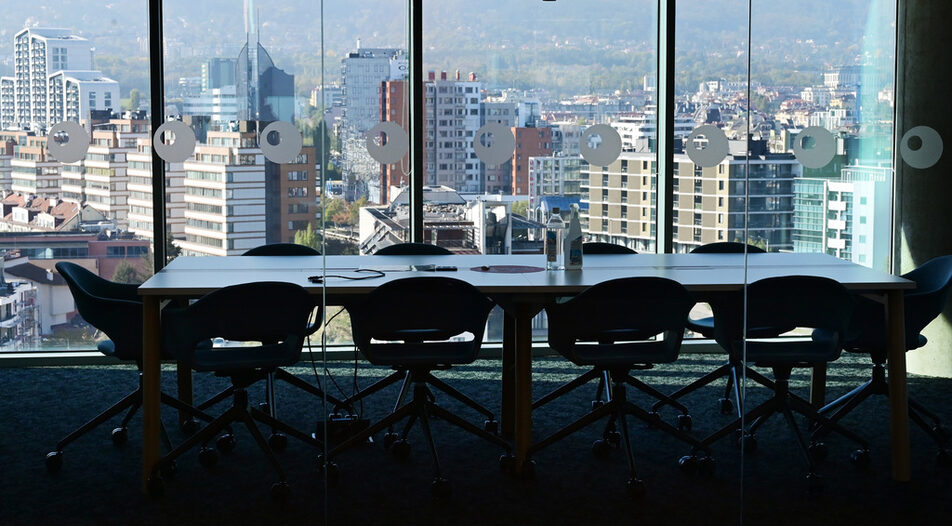 Where will you be working this autumn? This promises to be THE question of the year for many people.

This week, Apple employees started a rebellion after their CEO Tim Cook told them they need to get back to the office for at least three days a week by September. Facebook, on the other hand, lets its workers decide where they want to work from.

Working from home became the norm over the past year. As with any major intervention in the labor market, it has upended life for millions.

For some, it has been very burdensome, for others it has been a gift. Some lost jobs or were forced to work in unhealthy conditions, while others found new ways of organizing their lives.

The fact that the world labor market is unequal is not news. Yet how durable will that change be and what is going to happen after the initial waves of the pandemic is a question with huge and wide ranging repercussions: from the office and labor market to urban design, transportation and the property market.

Take Sofia: new research by Cushman&Wakefield Forton shows only 11% of the IT, outsourcing, or financial companies here plan to return their workers fully on site in the autumn. 38% will cut down on their office space, and virtually all of them plan to keep working from home for at least 20% of the time.

The research covers 43 thousand people: more than 5% of the labor force in the city. This will mean a lot of shifting on the office space market, as well as the growing trend of people buying more spacious apartments, to accommodate a work-space there.

Many companies are thinking of new ways to combine working from home and work from the office: Activity-Based Working, Hot Desk and other strange-sounding new ideas. The main premise is the same though: the old 5-day 8-to-5 working schedules are no more.

So as you leave the big city to go to wherever you will be spending your summer holidays this year, remember: some will return, others will not, yet.

One more reason to return: elections

It's election season again. Just months after the previous elections in April, the ballot boxes are opening again - on 11 July. This week marked the beginning of the pre-election campaign and we have, of course, a primer for you: read all about it here (courtesy of our own Martin Dimitrov).

GERB are probably on a losing streak, while the parties of protest, as they like to call themselves, are hoping to be able to form a coalition this time. They might just do so, if polls are to be believed.

Vote from anywhere, except the Bulgarian seaside

The rules were relaxed and there will be around 800 voting points abroad - more than ever before. If you are, for example, vacationing on the Greek seaside, a simple ID will let you vote there. If you are, however, on the Bulgarian beach, expect difficulties. You have to register some time in advance for that to happen. Not a perfect system, arguably, but the best we currently have.

Crash&burn: Bulgaria lost a pilot and a fighter jet

A MiG-29 fighter jet and its pilot were lost at sea this week, during a NATO exercise "Shabla 2021" on the Black Sea coast. Details are still sketchy, but the tragedy seems to have arisen because of either a malfunction or because of a problem with a moving target.

The pilot was very experienced and there is a sad irony in the fact that his ex-boss is now President and another general is head of government: both were quick to vouch for his qualities.

That raised again the old question of how Bulgaria is maintaining its fighter jet fleet which is composed of mostly Russian planes. This MiG has been serviced regularly.

A reminder: there are some F-16s in the queue

In order to prove to Donald Trump it was a good ally and to upgrade its fleet, Bulgaria paid over 1.1 bln euro in 2019 to the US for 8 fighter jets. They are still a work in progress though: the earliest possible date for their delivery is 2023.

The government is proposing a new program to help firms with 2.5 billion levs

The caretaker cabinet presented some of its ideas for economic measures, which include a new program in support of ailing businesses - providing credit guarantees to SMEs with a drop in turnover. Also, a reformatted version of the employment scheme (the "60/40" scheme) was introduced. New measures are being developed to help companies for the period from September to the end of 2020.

For some: better late than never (supposedly)

As of July 1, local tour operators will be able to apply for state aid in a new government program aiming to reimburse customers for planned, but subsequently canceled, travel during the pandemic from March 1 to December 31 last year. The available amount (16 million levs) will be distributed based on turnover, capped at the amounts due to customers. This is the new program that the government wants to use to aid the sector that faced some of the worst economic repercussions because of the pandemic.

Labor productivity grew by 2% in the first quarter.

While we were discussing whether to come back to the office or not, labor growth rate has been going up. It is strongest in the least productive sector of the economy - agriculture, where labor productivity is 10.5% above last year's level. Thus, people working in the sector produced value-added for a little over 1,000 levs at current prices.

Meanwhile, labor productivity in industry decreased by 2.8% on an annualized basis, and in services it grew by 0.7%. Thus, in general, each person working in the country produced on average 8,164 levs of GDP in the first three months of the year at current prices compared to 7,649 in the same period of last year.

Minister of Finance Assen Vassilev promised to conduct checks on all companies that benefited significantly from state resources and on those with large cash reserves. He's also vowed to improve tax collection.

These promises are mostly political as the NRA is likely to be unable to conclude the process by the end of the caretaker government's lifespan in July.

Many firms hope that his words are an attempt to send a message that all companies will now be equal in the eyes of the NRA. However, the specifics are also important - who would be affected, in what way, and what the end results would be. Read more here.

The Bulgarian hosting company Superhosting - acquired by the European group Team.Blue last year, has bought the assets of ICN.bg, the second largest firm in the local market for hosting services. The value of the deal was not specified. Thus, within a year, the Belgium-based Team.Blue has managed to consolidate the market for hosting services in Bulgaria. The transaction is for the acquisition of the company's assets, not its shares.

Telelink Business Services sold 7% of its capital in minutes on Monday. This is the third tranche of the company and comes a little over a year after its public debut. The main shareholders Lyubomir Minchev, Ivo Evgeniev and Spas Shopov offered another 7% of the firm's capital, or 875,000 shares at 13.50 levs per share. They raised nearly 12 million levs. The offer was planned for the period between 8 and 15 June 2021, but the shares were bought in the first 16 minutes after the start of trading on Monday.

Both industrial holdings that are listed on the stock exchange have been growing fast. The improved results that companies reported a month ago can also be seen in the consolidated data of their owners. Stara Planina has a 13% growth of revenue and 90% growth in profits for the first quarter compared to the previous. Monbat, on the other hand, has 26% and 200% growth of revenue and profit. The prognosis for the next quarter is also very positive.

The company which is in the mining business is planning to enter the market for finished goods from concrete. They are going to build a new 10 million leva (5 million euro) factory near Plovdiv and will employ 50 new workers. The investment should be ready next year.

CEZ deal is moving on

The European Bank for Reconstruction and Development (EBRD) said that it will extend up to 60 million euro ($73 million) in a senior loan to Eastern European Electric Company B.V. - a fully owned subsidiary of financial and insurance group Eurohold Bulgaria. The proceeds of the loan will be used to finance Eurohold's acquisition of the electricity assets of Czech energy group CEZ in Bulgaria.

While the deal for the largest energy distributing utility in Bulgaria was in doubt for some time, it seems Eurohold is on the final stretch. Last week, the company kicked off a process for a capital increase by up to 100 million euro through a public offering of new shares on the Bulgarian Stock Exchange (BSE), setting a success threshold of 40%. The group will offer for subscription 79 million new ordinary shares at an issue price of 2.50 levs.

An enterprise with owners based in Luxembourg, little experience in the industry, a modest turnover of 379,000 levs, and an accounting loss of 58,000 for 2019, has ranked first in the tender to construct the gas connection between Bulgaria and Serbia.

The Canpipe consortium, which includes a branch of the Canadian company Canpipe Industries International Inc. and its eponymous Bulgarian company, won with an offer of 164 million levs - not the lowest one offered in the tender.

Canpipe is little known in Bulgaria, working on just one other Bulgartransgaz project. It has nothing in common with Canadian giant Canpipe Limited. Instead, company registers reveal connections with businessman Alexander Staliyski - who is close to Boyko Borissov and Delyan Peevski.

A self-made businessman from Chicago who helped the ex-deputy head of GERB Tsvetan Tsvetanov form a party for the last elections. Now he has abandoned Tsvetanov and said he has plans to go it alone.

The head of Meridiam fund - the new owners of Sofia Airport, has a lot of plans for it - read all about it here.

The new European prosecutor-in-chief has arrived in Bulgaria this week for a short working visit - to remind the chief prosecutor Ivan Geshev to nominate yet more Bulgarian candidates for the European service. Yet Kovesi might prove more than a little curious about the recent trend of uncovering corruption by the caretaker government (and the lack of reaction by Geshev thereof).

The city has seen 34% growth in property deals in the first quarter compared to last year. It is still the cheapest of the four biggest cities in Bulgaria though, so that will keep the momentum going.

Where will you be working this autumn? This promises to be THE question of the year for many people.

This week, Apple employees started a rebellion after their CEO Tim Cook told them they need to get back to the office for at least three days a week by September. Facebook, on the other hand, lets its workers decide where they want to work from.