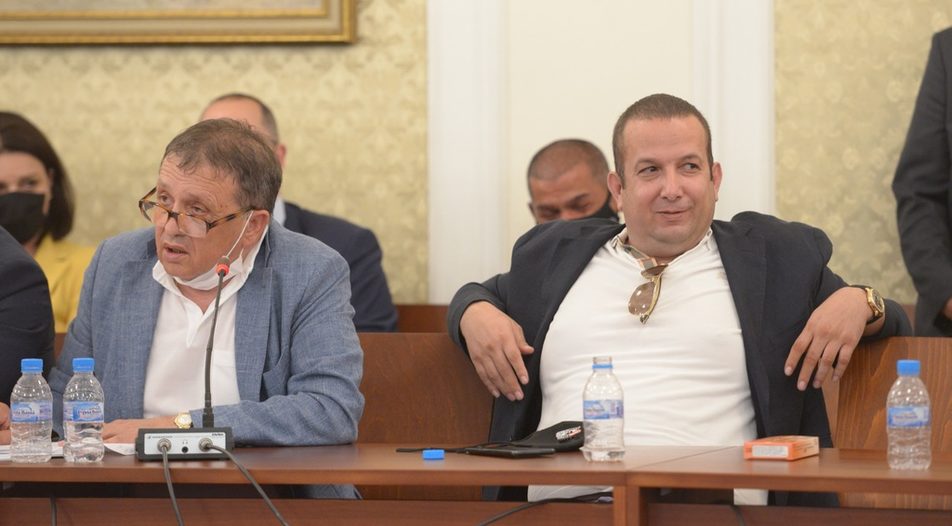 A tale from the (still) captured state, new elections and the Russians are coming... for now

A tale from the (still) captured state, new elections and the Russians are coming... for now

K Insights 07/05: there are money for COVID-measures until June; who is the largest builder in Bulgaria

It was supposed to be a relaxing week. With only 2 working days and the lines of cars leaving Sofia stretching for miles, nothing much was supposed to happen except for the Socialist party returning the mandate and certifying that the new parliament was unable to form a government.

On Wednesday early evening - one of the two working days - the parliamentary committee tasked with revision of Boyko Borissov's government was listening to witness statements. A man with a wide forehead, thin hair and casual style started speaking. By the 40-th minute of his statement, the chamber was up in arms.

It turned out the not instantly recognizable person was the largest land-owner in the country: an agricultural mogul named Svetoslav Ilchovsky. His business interests range from grain, pork and chicken farming, to sunflower oils and many other connected areas. And in all of those areas, the ruling party GERB and its henchmen had interests Ilchovsky wanted to reveal.

He claimed that each sector is ruled by a businessman close to Borissov, and ministers are just puppets exercising someone else's will. Ilchovsky filed documents to show how the owner of the largest chicken-producing factory was demanding false invoices and forcing him to sell his grain at half-price in order to be "left to work". The man - Ivan Angelov of "Gradus" (sitting next to him on the picture above, Ilchovsky is on the right) - was openly presenting himself as "the shadow minister for agriculture", said Ilchovsky.

His payments to schemes connected to GERB amounted to 400 thousand euro per year alone, said the farmer.

Advertising
Ilchovsky also clarified what happened with businessmen who failed to cooperate with demands. On one of his annual gatherings with Borissov (which he says is how things get divided) he was shown by someone a graphic videos of sexual abuse concerning an ex-alcohol mogul and a factory owner who are behind bars without a conviction for years now.

By the time GERB deputies realized where all this was going, it was too late: the news was all over town. They swamped the hall of the committee and drowned any further statements by the agricultural producer, postponing the hearings for Friday.

But if this is a harbinger for what is to come after GERB finally falls, beware. There will be a violent storm.

Ilchovsky spoke to "Capital" in the hall. And it gets better (or worse, depending on the viewpoint).

He claims that the Agency for food control is being used as a bat against every producer or importer who's not on side with the authorities. With the help of the Agency, only selected companies can import meat and raise the price artificially.

There is also a state-backed scheme for a cartel in sunflower oil where the above mentioned Angelov buys it all on reduced prices and exports it to Turkey.

"There is not a single EU-funded project in the agricultural sector where prices have not been jacked up or some fraud has not happened." "I have been doing business here for 23 years and have always gotten threats. I only live once."

"The regional minister called me and told me to stop buying land, or she will hand me over to 'their prosecutors'.

Expect the full interview on the website here on Monday.

"Nonsense, they are trying to undermine my success as a politician"

Is what Boyko Borissov said, in a hastily convened press conference on the morning of a national holiday. He denied ever meeting or knowing Ilchovsky.
Needless to say, the regional minister Petya Avramova denied also knowing about him, though he is the largest land-owner in her region.

What GERB will do to counteract this threat is still unknown, but websites close to the party have already moved into counterattack mode, accusing the farmer of all sorts of sins.

Speaking of which, freedom of speech is still a long way away

Only one of the three national TVs - bTV, talked openly about the scandal and devoted more time to it. The others tried to downplay it.

So now we wait?

Given that Parliament will be dissolved next week and new elections scheduled for July, there is not much the committee can do. But if things stand the way they are in the next chamber - and if GERB are kept out of power - expect a lot more of this to start flowing. The problem for GERB will be, of course, if it starts flowing even before that.

Prices of raw materials and energy goods like steel, aluminum, and CO2 quotas rose significantly in just six months. Economists are debating whether or not consumer inflation is on the horizon, but some parts of the real economy are already being jolted by price shocks. This is changing estimates for corporate balance sheets by the day, as this report shows.

Money for COVID - voted until June

The government in resignation used its last meeting to vote for 240 million leva more for COVID-related measures for the economy. Just before its replacement by a caretaker government, Borissov's cabinet decided to lengthen measures to support business, employment and first-line responders. The new cabinet, which is supposed to be appointed by President Radev, will not be able to finance more of those measures, because it will probably require a budget revision - something that only a working parliament can do.

The battery producer reported lower revenue and profit in 2020 than provisional results showed. While revenues are down by only 8%, profit has slipped by 89%, which means the pandemic hit the company really hard. The other issue surely undermining Monbat, was the spat with the authorities about leftover materials which were supposed to be recycled, but are claimed to have been found dumped. So Monbat has had to come up with additional funding to deal with it.

The only foreign investor in the Bulgarian hospital system steps into Serbia. Acibadem acquires 70% of the shares of Bel Medic Group-Belgrade. The price is not yet clear, but it includes a hospital and 5 medical centers in the Serbian capital. This makes Serbia the fourth country in Europe where Acibadem invests, after Bulgaria, Macedonia and the Netherlands.

The President is supposed to name a caretaker government for the next few months, until elections in June. The frontrunner for Prime Minister is his security and defence secretary Stefan Yanev.

The construction king of Bulgaria: Capital has proved that his empire of officially and unofficially owned companies, of which Hydrostroy is the biggest, makes him the largest player in the sector which is dominated by State money.

The biggest digital event of the year - Digitalk is coming up!

CEO of EIT Digital, the digital wing of the European Institute of Innovation and Technology, former executive for Philips and one of the most prominent advocates for harder competition with the US and China. Jonker will be a guest at Digitalk and claims Europe is lagging behind (podcast).

CEO of Rakuten Viber, who during Digitalk 2021 will explain how people stayed connected during the pandemic and will look into the future of communication. In an interview before the event he talked about how Viber doesn't want to become a social media company. "The easiest way to secure our users' personal data is by not having this data at all", Agaoua said. He also touched on the different services that Viber plans to add in the next few years.

Expression used jokingly referring to the wars, but also to Russian tourists. This week some fake news circulated Bulgarian media, claiming Moscow is going to ban Bulgaria as a tourist destination. This turned some hairs gray in the sector, since the Russian market is in the top 3 for the tourism industry. Turns out, nothing like this happened - flights have not been dropped and seaside airports Burgas and Varna are still expecting thousands of tourists to arrive. This will not mean a bonanza though - COVID measures and the pandemic and the spate of diplomatic spats mean that reservations are low. So all in all, not a very bright picture for now.

It was supposed to be a relaxing week. With only 2 working days and the lines of cars leaving Sofia stretching for miles, nothing much was supposed to happen except for the Socialist party returning the mandate and certifying that the new parliament was unable to form a government.