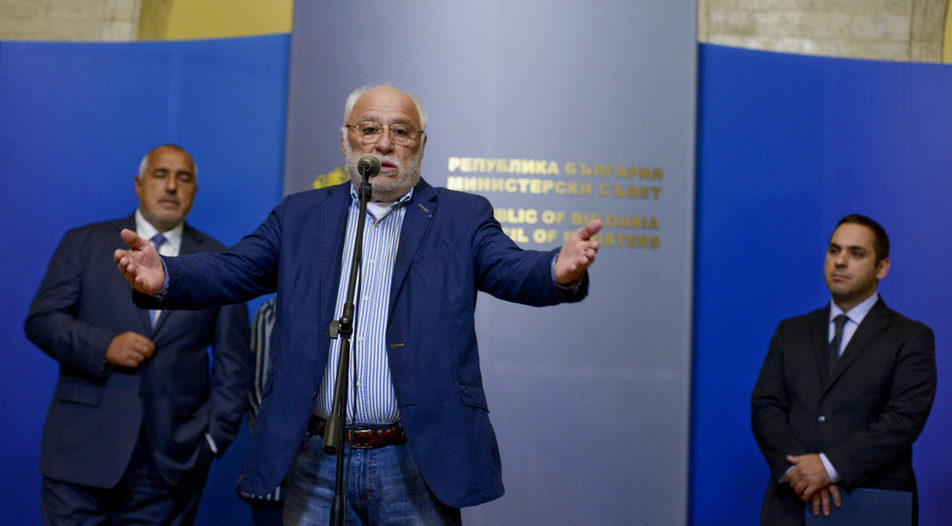 In 2017 Emilian Gebrev and his EMCO company were under coordinated fire by various state institutions trying to stop its exports, and none of them showed even slight interest in the arms dealer's poisoning

Bulgaria joined Czechia in accusing Russian saboteurs of blowing up arms and munitions factories in the country, but has consistently tried to hide the truth over the past decade

In 2017 Emilian Gebrev and his EMCO company were under coordinated fire by various state institutions trying to stop its exports, and none of them showed even slight interest in the arms dealer's poisoning

"What is the cost of lies? It's not that we'll mistake them for the truth. The real danger is that if we hear enough lies, then we no longer recognize the truth at all," says Jared Harris, the actor playing Soviet scientist Valery Legasov in the hit series Chernobyl (2019). Throughout the series, Legasov tries to untangle a web of deception surrounding the explosion of the Ukrainian nuclear power plant built by incompetent bureaucrats who serve a decaying corrupt government.

The poignant line, which seemed to embody the message behind the drama, also perfectly captures the Bulgarian-Russian spy story.

A bit after Czech republic started an all-out diplomatic war with Moscow and accused it of blowing-up an arms depot in the country, Sofia took a sudden sharp turn towards Russia.

It started expelling more Russian diplomats and has now officially accused the Kremlin in sabotage and attempted murder.

This did not resonate around Europe in the same way as the Czech allegations from a week earlier. However It is much more serious than any of the previous spying allegations that Bulgaria has leveled against Russia over the past two years.

In the last week of April, Bulgaria expelled one additional Russian diplomat (the deputy Defense aide to the Russian ambassador to Sofia) after the State Prosecution alleged that the Russian foreign intelligence service, GRU, might have been responsible for four explosions in Bulgarian arms factories and munition facilities over the past decade.

The allegations came a week after the Czech Republic announced that Russian agents from the clandestine 29155 special operations unit have caused the 2014 Vrbetice munitions depot explosion. Among the alleged saboteurs were several high-profile Russian spies, Alexander Mishkin and Anatoliy Chepiga, who have also participated in the Skripals' poisoning in the UK. Later, Prague expelled 18 Russian diplomats; Slovakia and the Baltic states promptly followed suit.

The Prosecution announced it was investigating the role of six Russian citizens who have resided on its territory around the time that four explosions in Bulgarian munitions and arms facilities have taken place and the arms producer and trader Emilian Gebrev was poisoned.

The names were not revealed, but four days earlier Bulgaria's Radio Free Europe (RFE/RL) section published a piece citing investigative website Bellingcat which published a list of seven Russian citizens, their aliases and the time they spent in Bulgaria over 2014-2015.

Advertising
In its attempt to coax the West into believing that the current authorities are dedicated Euro-Atlanticists, Bulgaria might be sleepwalking into a nightmare.

The speaker of the Prosecution, Siyka Mileva, listed four cases of explosions in arms and munitions facilities that were investigated due to similarities in their circumstances. These are the 12 November 2011 explosion of an ammunition dump belonging to EMCO near the village of Lovnidol close to Sevlievo, Northern Bulgaria, the 21 March 2015 explosion in a warehouse of the state-owned VMZ-Sopot factory (where allegedly EMCO production was also stored), another explosion in a VMZ-Sopot-owned facility on 14 April 2015 near the village of Iganovo, Karlovo province, and the 2020 explosion in a capsule detonators and igniters warehouse of the Arsenal factory near Kazanlak.

Additionally, Ms Mileva said that on 31 March 2015 the institution where evidence from the VMZ-Sopot explosions was kept in Sofia had caught fire. All incriminating material was destroyed.

None of the four cases, or the Sofia fire, has ever been solved.

The prosecutors claimed that a common thread was that fires preceding each explosion had driven employees away. Hence there were no fatalities on either occasion. The time between the evacuation and the arrival of the fire brigades, Ms Mileva said, was likely used to activate explosive devices from a distance.

"On all four occasions the destroyed shipments were designated for Ukraine and Georgia," she claimed, adding that there is an "informed supposition" that there are links between the sabotages and the 2015 two-time attempt to poison Emilian Gebrev, his son and the production manager of his company, as well as the sabotage in the Czech Republic.

The Prosecution's thesis was that the Russian citizens were trying to stop the production and export to Ukraine and Georgia of specialized military production from the Bulgarian company EMCO, owned by Mr Gebrev.

A theory full of holes

The problem with the sudden change of direction after years of carefully stepping around Russian actions is that many of the Prosecution's claims are simply manipulative or contradict its own earlier claims. Russian Foreign Minister Sergey Lavrov pointed out the most blatant contradiction, noting that the Bulgarian authorities either "did not know or knew throughout all those years what was going on and for some reason did not go public," quoted by TASS.

The very subject of the alleged sabotage and assassination attempt in Bulgaria - Emilian Gebrev - debunked important bits of the story through a series of press releases coming from EMCO.

First, EMCO claimed that two of the incidents the Prosecution is batching together (the ones that took place in VMZ-Sopot facilities) had nothing to do with the company. The only EMCO production that was on site on one of the occasions was 14 artillery shells. "Those who say that 14 shells could be the target of a terrorist attack obviously have quite a different agenda. The authorities have to answer what else was stored in VMZ-Sopot, whether it was the real target and why it has not been investigated for over six years," EMCO said.

Second, the company said the prosecution was telling barefaced lies regarding the so-called common thread. In fact, there was no fire preceding the Lovnidol explosion. The court ruling on the case does not mention fire at all.

Third, in fact the Prosecution knew for over 7 years that there was an explosive device involved in the Lovnidol explosion. As the same court case, cited by Radio Free Europe's Bulgarian edition says, the local prosecution office in Sevlievo noted that there were traces of plastic explosive found on the site and thus treated the case as sabotage as far back as 2013. But the higher, regional prosecution in the district of Gabrovo, returned the indictment to their local colleagues, saying that there was no proof that the plastic explosive had been used to blow up the warehouse. The case was then dropped due to the inability of the authorities to arrest a culprit and bring them to trial.

Lastly, EMCO also says that none of the material they had stored in the exploded facilities had been designated for export to Georgia or Ukraine. The company also disputed some of the claims made by Czech President Milos Zeman to the effect that the GRU unit had planned for the explosion to occur on Bulgarian territory after repatriation of the munition purchased by EMCO. Bellingcat writes that it has seen documents of EMCO that show the company had not planned to repatriate, or sell off, any of its inventory stored in Vrbetice.

The long and ugly story between EMCO and the authorities

Additional factors also cast doubt on the Prosecution's version of events surrounding EMCO's property and the personal attacks against Gebrev. First of all, the company has long been a target for the state institutions because of a clash with the power broker Delyan Peevski. It even got its export licenses suspended in 2017 - illegally, as the Supreme Administrative Court ruled in April of this year.

Yet, the elephant in the room between the state and EMCO has always been the attempted poisoning of Mr Gebrev, his son and his company's production manager. After keeping the investigation into his poisoning with an unknown pesticide in 2015 on hold for years, the State Prosecution reopened it a few weeks after a Capital Weekly report from January 2019 linked it to the Novichok attacks in Salisbury, England. Notably, Bulgaria was one of the few Euro-Atlantic states that failed to support London or dismiss Russian diplomats in the aftermath of the Skripal poisonings.

Then, after a yearlong spell of enthusiastic collaboration with partner Secret Services, the Prosecution announced that there was indeed a link between the two poisonings - the presence of a certain Russian operative "Seregy Fedotov", an alias of Major General Denis Sergeev in both the UK and Bulgaria during the times of the two poisonings.

The State Prosecution indicted Fedotov/Sergeev alongside two other Russians who supposedly participated in the operation against Mr Gebrev - Sergey Lyutenko (alias "Sergey Pavlov"), and Egor Gordienko (alias "Georgy Gorshkov") and put them all on the Interpol Red Notice list.

However, the initial outburst of enthusiasm seemed to be waning and then, on 26 August 2020, the Prosecution announced it was "freezing" criminal proceedings against the three officers. The authorities said they could not proceed with the investigation because the suspects were still at large and due to Russia's refusal to cooperate in extraditing the three men.

Another reason to doubt the agenda of the prosecution is the seemingly random way it is connecting explosions that seem unrelated (apart from supposedly EMCO), but ignores other unsolved explosions in munitions factories in Bulgaria.

According to a question addressed to the Prime Ministers issued by Democratic Bulgaria MPs Martin Dimitrov and Velizar Shalamanov, there have been no fewer than 16 explosions or deadly incidents in Bulgarian arms and munitions facilities since 2014. The Prime Minister has still not divulged whether there is any information known to the Bulgarian and partner secret services about Russian involvement that has been shared with the Bulgarian Prosecution, and if so - the specifics.

This is the last of a series of allegations against Russian spying activities in the country. It has a visibly political meaning - the government is using this as a tool to fight the pro-Russian president before new elections.

And while most of it could easily be classified as fairly rudimentary (even the "spy ring" discovered in the Bulgarian Defense Ministry in March seemed amateurish and was likely interested in predominantly publicly available information), the last one isn't. Accusing Russia of state terror on Bulgarian territory, on the basis of dubious evidence, has already backfired. Moscow placed Sofia on the list of "Unfriendly countries" and threatened to suspend tourist flights. In its attempt to coax the West into believing that the current authorities are dedicated Euro-Atlanticists, Bulgaria might be sleepwalking into serious trouble.

"What is the cost of lies? It's not that we'll mistake them for the truth. The real danger is that if we hear enough lies, then we no longer recognize the truth at all," says Jared Harris, the actor playing Soviet scientist Valery Legasov in the hit series Chernobyl (2019). Throughout the series, Legasov tries to untangle a web of deception surrounding the explosion of the Ukrainian nuclear power plant built by incompetent bureaucrats who serve a decaying corrupt government.

The poignant line, which seemed to embody the message behind the drama, also perfectly captures the Bulgarian-Russian spy story.