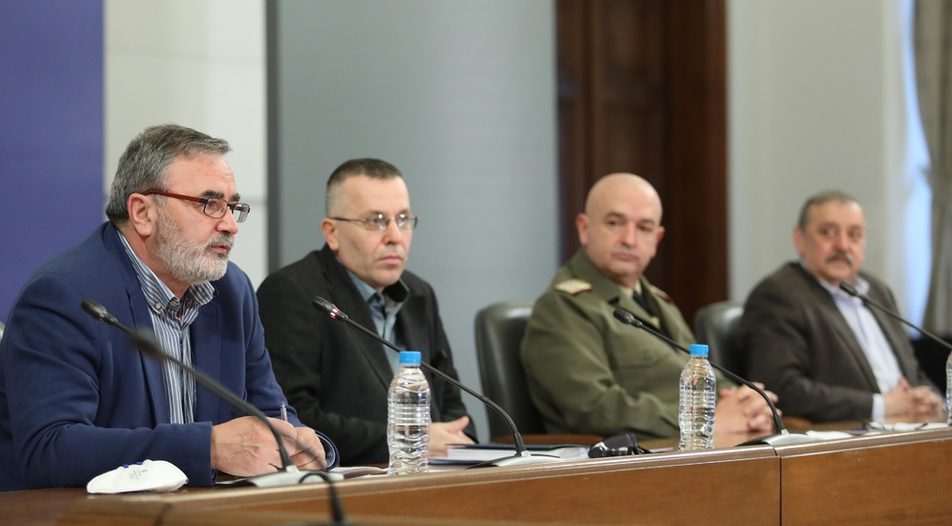 The outgoing government shuts down the National COVID unit

The outgoing government shuts down the National COVID unit

Why does it matter and what does it mean for the pandemic response in Bulgaria?

Prime Minister Boyko Borissov's first announcement following his government's resignation last Thursday was that the cabinet was dismantling the National Crisis Staff to Combat the Spread of Covid-19.

"The staff," as the committee has been billed over the past year, has become synonymous with the efforts of the state to curb the pandemic. Its face, Professor General Ventsislav Mutafchiyski, became the mascot - and moving force - behind the first anti-Covid measures in the spring of 2020.

Its disbanding is a serious move.

For those who downplayed the seriousness of the virus (and who failed to be moved by the staggering death toll of the past six months) Mr Borissov's decision confirmed that he had established "the staff" to sow panic and fear through uniformed doctors like Prof. Mutafchiyski.

Most people, however, perceived it as a sign of a "scorched earth" policy that betrayed Mr Borissov's indifference to the plight of medics and patients in the wake of his own political marginalization.

"This looks like a malevolent action to destabilize the control of the pandemic; it takes out the acting coordinative and managerial body in the fight against it," said Alexander Simidchiev, a frontline Covid-19 doctor and a newly elected MP from the Democratic Bulgaria coalition on Friday. Medics from the Bulgarian Doctors' Union also protested.

Whatever the reason for the decision, one thing is certain - it comes at a very bad moment. Eurostat data for January and February 2021 show that the second wave of the COVID-19 pandemic has been gradually losing its force. Indeed, most EU states have been reverting to more 'normal' death rates, with the notable exceptions of Czechia, Slovakia, Bulgaria, Poland, Estonia and Malta.

While the number of deaths has been gradually declining in recent weeks, the general daily Covid-19 death toll remains around 120 - an extremely alarming figure. Despite that, the leading organ to manage the pandemic is being shut down and the reasoning behind the move seems specious.

"Dismantling the Staff is an absolutely logical move, because it is an overarching body that coordinates state institutions. It is plain that the next Prime Minister is supposed to appoint his own Staff," Health Minister Kostadin Angelov noted on Friday, acknowledging the political machinations behind the dismantling of the organ. Ironically, the catchphrase he loves to use when attacking the opposition is that they are "politicizing the pandemic and the role of the doctors" for their own gain. Besides the obvious failure of Mr Angelov to see the rafter in his own eye, there are several good reasons to discuss how the Crisis Staff has been used - and abused - over the last 14 months.

The story of the pandemic-fighters

The Crisis Staff was launched with the idea that medical experts, not politicians, were better equipped to manage the epidemiological situation. In its early days, that is exactly what happened - Prof. Mutafchisyki, who captured the public imagination with his somber, serious statements about the dangers of the virus, quickly became a trustworthy figure. Although the personal restrictions and curbs on freedom were perceived as harsh - albeit less severe than in most Western countries - they were accepted because people believed the Afghan war veteran's frank judgments.

Unfortunately, behind Prof. Mutafchiyski lurked the omnipresent shadowy figure of Mr Borissov. Sometimes he approved the Professor's decrees (likely because he himself didn't want to be the face of tough restrictions) but at other times he tried to block them - with absurd consequences. The most blatant case was when the Staff decided to make wearing masks in public compulsory, only for this to be reversed by the health minister (meaning by Mr Borissov) and then modified, but still applied, the following day.

Advertising
The Crisis Staff was launched with the idea that medical experts, not politicians, should manage the epidemiological situation. Its initial success, however, led to its own marginalization in the autumn - with deadly consequences.

Ultimately, Prof. Mutafchiski's popularity brought about his "fall". Pollsters gave him a 20 percent higher rating than Mr Borissov and his extremely successful handling of the first wave of the pandemic (Bulgaria had fewer than 150 Covid-related deaths in the first four months of the epidemic last year) made the Prime Minister jealous and lulled the public into complacency.

The effect was that Prof. Mutafchiyski and the rest of the Crisis Staff team were sidelined by new healthcare minister Kostadin Angelov last summer. And while the miscommunication between the expert-led staff and the politicians led to farcical situations in the spring, the total sidelining of the medics led to tragedy in the fall of 2020.

Mr Borissov became hostage to the (legitimate) interests of the hotel and restaurant businesses, which had suffered disproportionately from the effects of the lockdowns and could not expect adequate state support. Mr Angelov, for his part, failed to prepare hospitals for the onslaught that arose due to the long-postponed second lockdown. The grim result was over 15,000 total recorded fatalities, most of which occurred in the last six months, and Bulgaria achieving one of the world's highest overall excess mortality rates.

Immediately after the announcement of the dismantling of the Crisis Staff, the outcry caused Health Minister Angelov to announce the reinstatement of the Staff's daily briefings. Yet this is far from its most important task. It also carried out an important coordination role between hospitals and the ministry, organized the redistribution of scarce supplies and decided when rules needed tightening or relaxing.

This led to calls for the newly congregated Parliament to establish its own pandemic response committee, which happened - albeit clumsily - on Friday with the forming of the Healthcare committee headed by Dr Simidchiev. On Sunday, during a party press briefing, Mr Borissov urged Dr Simidchiev to take over Prof. Mutafchiyski's position - likely in an attempt to create friction between the general and the doctor-politician.

In the end, parliamentary oversight over the work of the experts might, in fact, give the latter a chance to restore order to the chaotic and populist pandemic response of the current authorities. The next few weeks will tell if the reformed parliament, which is far from immune to the perils of populism and partisanship, can live up to this task.

Prime Minister Boyko Borissov's first announcement following his government's resignation last Thursday was that the cabinet was dismantling the National Crisis Staff to Combat the Spread of Covid-19.

"The staff," as the committee has been billed over the past year, has become synonymous with the efforts of the state to curb the pandemic. Its face, Professor General Ventsislav Mutafchiyski, became the mascot - and moving force - behind the first anti-Covid measures in the spring of 2020.