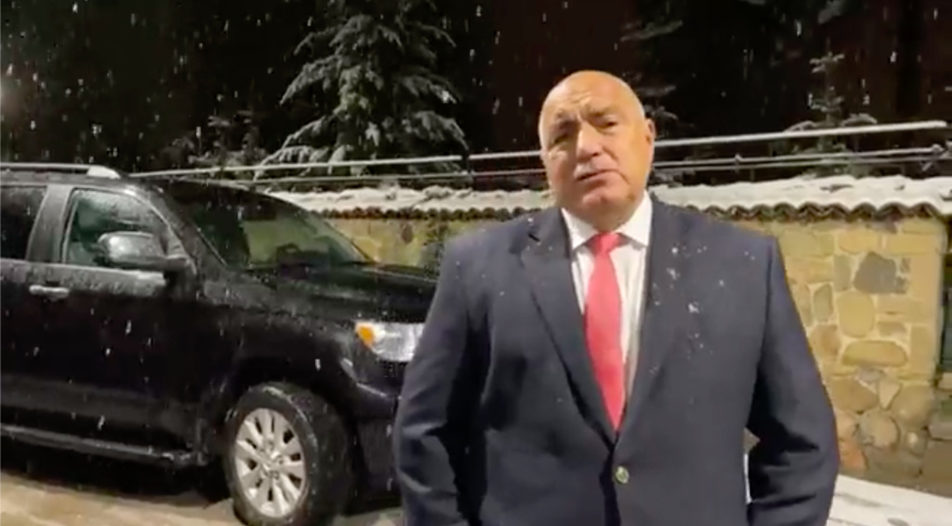 An era is about to end, a TV showman rises and TurkStream has some dirty secrets

An era is about to end, a TV showman rises and TurkStream has some dirty secrets

K Insights 09/04 : An earthquake in Bulgarian politics, the economy fares surprisingly well and a Wolf to beware of

If you ask almost anyone in Bulgaria what they associate Boyko Borissov with over the last couple of years, that would inevitably be the answer.

After the man who ruled Bulgaria for the last decade gave up on answering questions from the media or even meeting journalists, his only means of communication with the people became the Facebook live stream option, where he led a virtual roadshow behind the wheel of his favorite SUV. For anyone watching, it was an endless circle of new road construction, factories and mayoral visits, where Borissov was greeted and applauded in a very Soviet style.

So it was only fitting to choose the black jeep as a background for his strange, babbling appearance on election night, after it turned out his GERB party is losing all its coalition partners and the ability to govern again.

"I'm offering you peace. Is there anyone more experienced than me? Someone with more international support?", claimed Borissov, standing under the snow and trying to do what he does best - sow division among his opponents and attract support while offering money and positions. Whether he manages to do that remains to be seen.

But it is clear that a landslide has caught Borissov's Toyota this time and a wind of change is blowing in Bulgarian politics. This might mean a government without Borissov or any of his business associates for the first time in 12 years, paving the way for judicial reform to free up the prosecution, and procurement free of corruption for the next 29 bln. euro from the EU.

Or it might mean a slight detour before heading back to the usual formula of fresh elections and GERB finding another way to combine a coalition of the willing.

The Toyota is waiting.

So what basically happened?

GERB are still the winners, as they have been for the past 12 years with 26%. Yet all of their current or possible coalition partners were ejected from parliament - see the link. So their 75 seats are far from enough to form a government.

The anti-GERB coalition, more or less benefiting from the huge anti-government protests last year, was the big winner. TV host Slavi Trifonov's party "There is such people" came second with 17%, Democratic Bulgaria had 9% and "Stand up! Out with the Thugs!" won 4%.

The socialist party BSP slid badly and came third for the first time ever - with 15%. The Turkish MRF party, which has always been the traditional kingmaker, also lost votes and won just 10%.

There are really only three viable options.

1. A GERB government, backed by MRF and someone else. This is the least possible scenario - every other party swore they would not do deals with Borissov.

Advertising
2. An anti-GERB coalition government, led by Slavi Trifonov's TISP. This is possible but will require a lot of negotiations (and some spats have already emerged in certain parties, suggesting it would be very hard to keep any coalition stable).

When will we find out?

My bet is as soon as possible. Borissov wants to play for time, as he is technically still ruling the country until a new government is formed. But his sworn enemy - the President Roumen Radev will be fast to assign the new mandate. So we will know if we have a new government before the end of the month.

In this scenario, we will have three election cycles this year. There are presidential elections scheduled for October but there is no constitutional way to delay and combine the two, so Bulgarians will have to first vote in parliament elections again, and then cast their vote for a new head of state.

Someone needs to run the country

This will not be the perfect scenario. Time is of the essence: at the end of April Bulgaria files its plan for 12 bln euro from Recovery and Resilience facility and in the autumn - the programs for another 12 bln. euro for 2021-2027 budget frame.

A smooth operator like Borissov knows how to make use of both for his own political goals.

And as already mentioned, there are a ton of things to dismantle after a decade of building a GERB model of state-run crony capitalism. Speaking of which, let's move to

What do you do before you lose power? Make high-level appointees ...

The government is rushing to fill any remaining positions within the state-controlled entities. After transport companies and energy structures, this time it's hospitals. Over the past week it emerged the Ministry of Health has come up with last-minute competitions for directors and boards of state-owned hospitals.

It was supposed to do this a long time ago, but the pandemic was used as an excuse to delay. Now, with elections results in, it seems this has moved up the agenda. As well as with other competitions, they were mostly won by the current directors and there was not a lot of competitioп.

The concessionaire of Sofia Airport got the 10-year grace period he wanted from the cabinet for the payment of fees. The decision was approved at Wednesday's session of the Council of Ministers, which was the last before the government officially files its resignation.

Another concession: 4 years postponement for the renter of Gorna Oriahovitza airport - Roumen Gaitansky The Wolf, to fulfil his obligations to invest 16 mln.euro.

The other thing the Cabinet of Ministers approved is close to 100 million levs in additional funds. The largest amount (46.6 million levs) is for the purchase of vaccines. About 10 million levs are meant for various projects of local governments, and Bulgarian National Television is set to receive an extra 20 million levs to repay overdue debts.

Did you need money for that pandemic?

10 months after announcing state aid for medium-sized companies, most of them still haven't seen any money. According to a report provided to Capital Weekly by the Ministry of Economy, with 1548 contracts signed for a total value of over 212.8 million levs, as of April 1, a grand total of 7.7 million levs have been paid out for fewer than 60 contracts.

In other words, only about 4% of the companies with signed contracts have actually received the aid they were approved for.

Municipal finances are improving in 2020, but investments are shrinking, data from the Ministry of Finance shows. By the end of last year, the overdue liabilities of local authorities reached 127.8 million levs (64 million euro), which is an improvement both compared to the third quarter of 2020 and compared to the same period of the pre-crisis 2019, when the amount was 44 million levs higher.

In 2021, 9 cities were identified as 'municipalities with financial difficulties", while in 2019 the number was 16.

The International Monetary Fund has revised its economic outlook for Bulgaria to 4.4% in 2021 and 2022. In October, the fund's experts bet on a 4.1% increase in GDP in Bulgaria 2021. In the long-term, the forecast for 2026 shows a slowdown in growth to 2.8%. The upward revision in Bulgaria's economic outlook follows the general global trend - the IMF increased global growth estimates to 6% in 2021 saying that an end to the crisis is 'increasingly visible'.

The former residence of American ambassadors in Bulgaria at 18 Veliko Tarnovo Street in Sofia (you can see it in the link) is up for sale. The fact that the house is vacant and a new owner is to be found has been known since last July. However, only recently has a 'For Sale' poster appeared on its facade. It shows that the sales agent is CBRE (Coldwell Banker Richard Ellis) - an American consulting company, which for many years topped the rankings for the most famous brands in the field of real estate of The Lipsey Company.

At least 7 people have died during the construction of "TurkStream" through Bulgaria.

This is what Capital Weekly revealed in an investigation about the hastily completed Russian gas project, running through 470 km of Bulgarian territory. Most of them were foreign workers - Italians, Belarussians and others. While a project of this magnitude is always a strain on the companies building it, there was a trace of ecological and infrastructural problems connected with the huge pipeline, claims the investigation.

There would be no more waste burned in Galabovo

Brickel, associated with the well-connected businessman Hristo Kovachki, officially gave up on burning RDF and other waste in Galabovo, according to a new application for a complex permit that would enable the plant to add only biomass and oil shale to coal as fuel. According to the document, the shift was provoked by public dissatisfaction in response to the burning of RDF and other waste in the region despite the fact that last year the court ruled that the company did not need an environmental impact assessment to burn waste.

The screenplay writer-in-chief for Slavi Trifonov's TV show, who is now the unofficial spokesperson and leader of his party - the second biggest in Bulgaria.

This businessman from the 90s, still connected to the Turkish MRF party as well as other political figures, is going strong: apart from the airport gift mentioned above, his companies managed to squeeze 75 mln. euro credit from a state-owned bank, and he is building a large mansion in a state-owned forest reserve.

restaurants are opening up at 50% capacity again

the first possible date for the convening of the new Parliament

If you ask almost anyone in Bulgaria what they associate Boyko Borissov with over the last couple of years, that would inevitably be the answer.