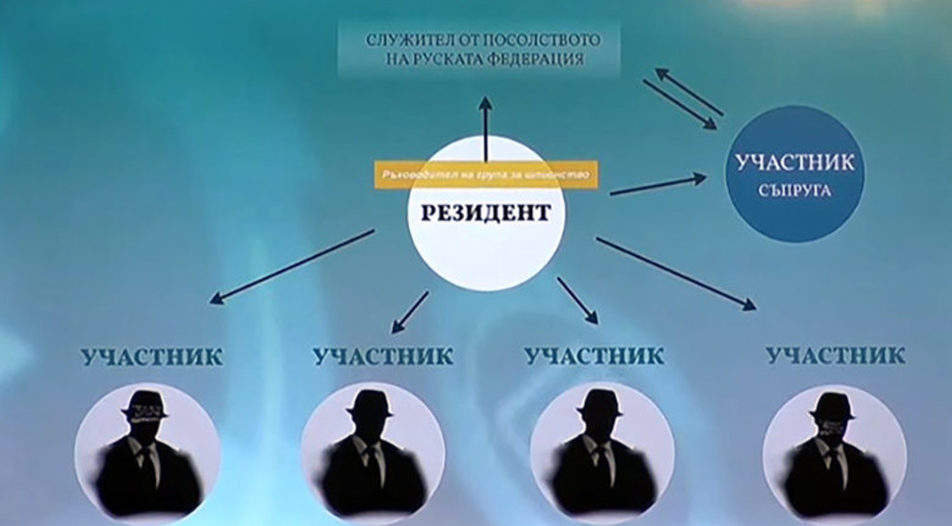 The scheme of the spy network, as described by the State Prosecution

The story of five members of the Bulgarian counterintelligence service have reached NATO, but it reveals more about the country’s unreformed institutions than Moscow’s spy efforts

The scheme of the spy network, as described by the State Prosecution

On Friday, 19 March, Bulgaria awoke to a fresh instalment of the 18-month long spying saga that has seen the state prosecution expose, one by one, a total of 15 people, Bulgarians and Russians, who had supposedly been working for the Kremlin against the Bulgarian national interest. With a dramatic flourish, Prosecutor General Ivan Geshev announced that his institution had busted five Bulgarian officers from counterintelligence, as well as the Russian-born wife of one of their number.

"The case has no comparability after 1944. Bulgarian citizens should be proud of DANS (the National Security Agency) and the Military Intelligence Service, which have recently finally regained their professionalism after suffering heavily during the 'transition', Mr Geshev said during a one-sided press-conference.

"This time we need to unite behind love for our nation, a word that we are starting to forget, and learn to be Bulgarofils rather than Bulgarofobs. And we should not sell the national interest for pennies - not because we hate any other nation, but to protect Bulgaria," he added in a revolutionary tone. "There is only one other similar historical case, the 'Cambridge Five' of the legendary spy Kim Philby," Mr Geshev concluded.

Taking spying to the next level

The saga triggered several reactions and counter-reactions. Two more Russian diplomats were expelled from Sofia (bringing the tally to a total of eight over the past 18 months), Prime Minister Boyko Borissov politely asked the Kremlin once again not to spy on us, then met Moscow's ambassador to Sofia Eleonora Mitrofanova (according to the Council of Ministers' press release they broached agriculture and cultural exchange, of all things, and promised to converse in a spirit of "benevolence and pragmatism").

Flamboyant as usual, the Russian Foreign Ministry Spokesperson Maria Zakharova said that "Bulgaria ought to stop the witch hunt" and warned of retaliation. Meanwhile, the spy drama reached the top layers of NATO, as Bulgarian Foreign Minister Ekaterina Zaharieva took it to the summit of the foreign ministers of the Alliance. NATO Secretary General Jens Stoltenberg told Bulgarian National Television that "in Bulgaria, we have been observing Russia's recent behavioral pattern of attempts to undermine democratic institutions, and interfere in domestic politics and the field of intelligence".

But is this really so? Russian meddling in Bulgarian politics has long been obvious to any keen observer. Yet this particular case says more about the failure of Mr Borissov's supposedly "pro-Western, Euro-Atlantic" governments to reform institutions rather than Russian interference patterns.

The spy who loved me

First of all, who are the suspects who will likely face charges of treason? The head of the group, according to the prosecution, is retired Colonel Ivan Iliev who held a senior position in the Foreign Intelligence Service - part of the Defense Ministry. The 74-year-old counterintelligence officer is an "old school" officer who had specialized in the Soviet Foreign intelligence division (GRU) and, according to records made by DANS, is a declared Stalinist. He had experience working as an intelligence officer outside Bulgaria before the fall of communism and then continued teaching intelligence cadres after 1989, retiring more than 20 years ago - in 2000.

Another co-conspirator is Lyubomir Medarov, also a retired officer, who last worked in the Classified Information registry of the State Parliament. The last known name is of an active public servant - Colonel Petar Petkov, deputy head of the budget division of the Defense Ministry. The other two unnamed officers who were indicted are analysts in the Foreign Intelligence Service, responsible for reporting on Russia and hybrid threats and risks.

Finally, the link between the spy ring and the Russian embassy, according to the investigators, is Mr Iliev's wife Galina Ilieva, a Russian-born Bulgarian citizen. She was allegedly close to the Russian embassy and the families of the two expelled diplomats and regularly dropped by to receive instructions. In fact, she appears in one of the video and audio recordings released by the State Prosecution entering the embassy compound and then telling her husband that "they are stopping [the spying activities] for now."

What were their targets?

The next question is what exactly was the group instructed to report to the Russians? "[We need] materials that are related to the situation here, materials that are linked to Russia, Ukraine, Nagorno Karabakh, something relevant," Mr Iliev, dubbed "the Resident" by the prosecution, instructs one of the analysts in a released recording.

On a printed document, released by the prosecution, written half in Bulgarian and half in Russian, the spies were instructed to collect data on the planned NATO maritime coordination center in Varna, the planned operations of the Alliance in different regions, including information about the budget and tasks, NATO committee decisions and US State Department and Defense department information on upcoming investment and rearmament programs in Bulgaria.

That sounds serious. Yet, "It is difficult to say that any important information has been leaked. Part of it was also public," Defense Minister Krassimir Karakachanov told Bulgarian media in the aftermath of the scandal. So - who is right - Mr Karakachanov, praised by Prosecutor General Geshev for his help in busting the spy ring, who says that no irreparable damage has been done? Or Mr Geshev who compared the notorious British ring with decades-long spying that saw innumerable top secret documents being leaked to six months of shenanigans involving a handful of mid-ranking Defense Ministry officials? Most observers would think that the comparison to Philby's antics is far-fetched.

Advertising
"Whatever information these traitors have extracted, it cannot be compared to the impact of our government's actions in realizing Russia's strategic interests in Bulgaria" - Boyko Noev, former Defense Minister and Ambassador to NATO

Yet it is spying, nonetheless. According to a former head of Counterintelligence, Dimo Gyaurov, this is "pedestrian-level spying, very low on the operational ladder," but one that should not to be taken lightly.

Did any of the abovementioned spies really have access to important information? Mr Medarov probably did not - the most secretive documents that reach his department in Parliament are flagged "Confidential" at most. The budget department representative Mr Petkov is also unlikely to have had access to NATO-grade secrets.

Just spoke with PM @BoykoBorissov of #Bulgaria, a reliable Ally. We discussed various issues on #NATO's agenda, including our relations with #Russia.

It is unknown who the other two active officers are and what they were privy to, but all this begs another pertinent question: How well does DANS vet those who receive access to secret documents?

Last, but not least, comes the question of the management of Bulgarian secret services. They are likely some of the world's most closeted organizations. They are subject to no political oversight whatsoever. They only come to prominence when there is a scandal - like in 2019, when the previous director of the Foreign Intelligence division Plamen Angelov had to resign after the prosecution investigated him releasing access to 500 NATO- and EU-grade classified documents. This probe is still open more than two years later.

Who are the real Russian men in Bulgaria?

Finally, the investigation's timing - two weeks before the election and just days before the NATO summit - raises suspicion that it's all a form of political grandstanding. It is an often-used tool of this government to use such information "grenades" to create a smoke-mirror.

The Bulgarian authorities are trying to save face in front of Brussels and Washington with the story of its nationals spying for Russia, former Defense Minister and Ambassador to NATO Boyko Noev told the Bulgarian section of Radio Free Europe on Tuesday. He added that the operation sought to position the prime-minister on the "right side of the barricade" before polling day. Mr Noev conceded that the six Bulgarian spies' betrayal was a fact - but even so a court will still have to establish if the information shared with the Russians was actually secret.

Mr Noev added that the most ardent promoter of Russian influence at home cannot be found among the six alleged spies. "It is obvious that the Bulgarian authorities and the Bulgarian government and Boyko Borissov personally - especially during his last term - fully, completely, defended or pursued the strategic interests of Russia in Bulgaria. [I mean] the Belene Nuclear Power plant, the crushing of the Bulgarian arms industry, and, of course, the sweeping and suppression of the terrorist act in Bulgaria against three Bulgarian citizens, known as the "Bulgarian Novichok". On all these issues, the Prime Minister and his entourage follow the interests of Russia, not Bulgaria," Mr Noev summarized.

Under Mr Geshev, the State Prosecution, with the support of the Foreign Ministry, seems to have launched an all-out assault on Russian spying in Bulgaria. Yet no verdicts are still on the horizon. Meanwhile, the notorious poisoning of arms dealer Emilian Gebrev - by part of the same assassination squad that tried to murder Sergei Skripal in the UK in 2018 - is purposefully ignored. This speaks volumes about the double standard of the Bulgarian authorities.

On Friday, 19 March, Bulgaria awoke to a fresh instalment of the 18-month long spying saga that has seen the state prosecution expose, one by one, a total of 15 people, Bulgarians and Russians, who had supposedly been working for the Kremlin against the Bulgarian national interest. With a dramatic flourish, Prosecutor General Ivan Geshev announced that his institution had busted five Bulgarian officers from counterintelligence, as well as the Russian-born wife of one of their number.

"The case has no comparability after 1944. Bulgarian citizens should be proud of DANS (the National Security Agency) and the Military Intelligence Service, which have recently finally regained their professionalism after suffering heavily during the 'transition', Mr Geshev said during a one-sided press-conference.