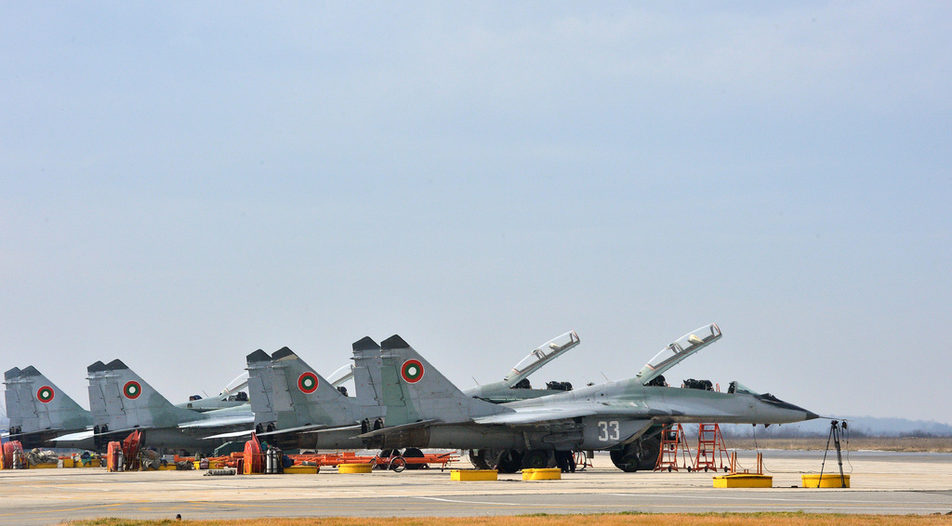 Despite the pandemic, Bulgaria went on a military spending spree in 2020 – and pledges to continue

After Bulgaria spent a record $2.2 billion on defense in 2019, mostly on a one-off purchase of fighter jets from the USA, the government cut spending on military hardware to $980 million in 2020.

Bulgaria is rearming! After three decades marked by dereliction of duty, Sofia is finally catching up. It has ordered eight advanced US fighters for its Air Force and is planning to buy eight more by 2024. It has also agreed with a German shipbuilding company to construct two patrol vessels for its Navy and is likely to order 150 armored vehicles for its mechanized infantry. Add to that pledges to spend about two to three billion euro on new hardware over the coming 5-10 years alone, and the promises seem bold indeed, including ones to resurrect the scrapped submarine fleet.

"Over the past 30 years there has been almost no investment in the Bulgarian army. We aim to catch up in a matter of ten years," Defense Minister Krassimir Karakachanov commented in December while announcing a project that would see 60 Russian-made T-72 main battle tanks upgraded by a Bulgarian company.

"This is a patriotic deed," underlined Mr Karakachanov who is also leader of VMRO, the party that forms part of the nationalist alliance United Patriots, the junior partner in the government coalition. "Bulgarian taxpayer money is used to support the Bulgarian economy rather than let it leak abroad and create the notion of Bulgaria being a colony obliged to buy from abroad." Mr Karakachanov prides himself on having increased the salaries of military personnel four times over the span of his mandate and is promising an additional 10% rise in 2021.

Of course, upgrading Bulgarian military to XXI century standards is a worthy goal - and a long-neglected responsibility the country has as a member of the North Atlantic Treaty Organization (NATO). Yet, certain aspects of this sudden rush to rearmament cast a shadow over the endeavor.

Since the fall of the Communist regime in 1989, Bulgaria has in effect ignored its military, spending most of its modest defense budget on active personnel salaries and pensions of the vast ex-military from the previous era. Things got even worse with Sofia's entry into NATO in 2004, which the political class treated as an insurance policy - and a reason to mostly ignore its defense sector. Until 2018, not a single large project for the replacement of the aged Soviet-era hardware of the Bulgarian armed forces had passed the planning phase. The few smaller ones that did move on, including those for the purchase of Cougar and Panther helicopters, were so mired in corruption and mismanagement that taxpayers and politicians alike lost what little appetite for rearmament they might have had.

After 2014, however, a number of external challenges and internal dynamics in Bulgarian politics made turning a blind eye to the military impossible. Russia's annexation of Crimea, and the Wales NATO summit in 2014, which set a bar of 2% of GDP for spending on defense by the Alliance members, served as important stimuli. Outgoing US president Donald Trump also pressured NATO allies to pay their fair share on defense - preferably to the American arms industry. This also helped convince Mr Borissov to push through one of the biggest purchases of hardware by Bulgaria so far - of eight F-16 combat aircraft.

A few problems have beset the whole process. Firstly, there is no set and agreed - by parliament and the military - plan regarding which projects to prioritize. This is a significant problem, especially when an economic downturn due to the pandemic looks likely. Secondly, specific projects have been either completely redrawn (like the acquisition of new fighters) to accommodate the pressure from strategic allies like the USA, or blocked (like the purchase of armored vehicles) because of a poorly designed procedure.

Due to lack of transparency there is no clear explanation for what has been chosen and how this was agreed. Those in power often ignore experts' recommendations in favor of a politically feasible decision. Sometimes this just makes things more expensive: for example, the F-16s' purchase turned out to be at least 300 million euro costlier than initially planned. This might even put the lives of service members at risk. This can be said of the contract for the purchase of Bulgarian-made armored cars for the Special Operations Forces, which are being bought for "patriotic" reasons, despite claims by people in the defense industry, as quoted by Capital Weekly, that "they are no better armored than the cars of a pretentious Sofia thug".

Most importantly, the lack of foresight risks certain projects not being realized at all or, even worse, shoveling a lot of money into assets that will be hard to maintain and therefore impossible to utilize optimally. This is what happened with the 380-million euro contract for purchasing 18 Cougar and Panther helicopters from Eurocopter in 2005. Currently, only five out of 12 Cougars and two out of six Panthers are still operational due to lack of funds for maintenance. This can just as easily happen with the expensive F-16s, which will be even costlier to maintain.

"Those who criticize us should have bought [military hardware] in previous decades. With the tanks and artillery, we also build roads," Mr Borissov boasted in his signature fashion as he awarded the T-72 upgrade contract to state-owned Terem without a tender in December. Yet, when a country is pledging to spend up to 2% of its gross domestic product (GDP) to improve its military capabilities over the next 12 years, as the Defense Ministry has projected in its Strategic Defense Review, the criteria for transparency should be higher.

What's in the price?

"We are thankful to the USA for their continuous support for the modernization of our armed forces. This way we gain better security and increase NATO's capabilities," Mr Borissov said in October when he met US Assistant Secretary for Political and Military Affairs Clarke Cooper. A couple of weeks earlier, Mr Karakachanov signed a roadmap for cooperation in the field of defense with the US in Washington. It was rumored that one of the missions of the Bulgarian defense minister during his visit was to probe about the conditions for purchasing the next batch of eight aircraft on better terms.

Bulgaria may be gaining from this reinvigoration of ties with the USA, if we ignore the supposition that it may well be a product of the coarse transactional diplomacy of the former US administration of President Donald Trump. Having access to advanced weapons systems and training is one thing, but strengthening the defense partnership with the dominant NATO ally is an important security guarantee for a frontline country that is surrounded by less than benevolent regional powers - Turkey and Russia.

Yet, a cynic cannot help but wonder if, at least partially, the reason for choosing the more expensive F-16 over Gripen manufactured by Sweden's SAAB, was not a peace offering to Washington over the push to construct the TurkStream gas pipeline extension to Europe through Bulgaria - a purely Russian endeavor. The same goes for the awarding of the naval contract to German consortium Lurssen. The deal suddenly got forced through just as the government of Mr Borissov, a traditional favorite of Chancellor Angela Merkel, began to look less palatable to both Berlin and Brussels.

Although this is just speculation, it needs to be taken into account if the purpose of Bulgaria's great rearmament is not merely to make the EU's poorest member pay up, but also an attempt to salvage its problematic leadership. Rearmament is important, but at a time of economic crisis it cannot be pursued at all costs.

If Bulgaria wants to rapidly upgrade the capabilities of its military and make it a viable force to counter the complex hybrid threats of the future and the region, it needs to act according to a strict plan that is well coordinated with its Euro-Atlantic allies.

AIR: Sofia purchased 8 F-16 Block 70 fighter jets from US aerospace and defense company Lockheed Martin for 1.1 billion euro in 2019. In addition, Bulgaria pledged to invest 150 million euro to bring its main airbase, Graf Ignatievo, up to the standards required to operate the new aircraft. It is likely that the purchase of a second batch of eight F-16 would be arranged by 2024, hopefully at a lower or similar rate. The additional aircraft would require further investment into expanding the airbase.

Until then, maintaining the existing fleet of Soviet-made MiG-29 fighter jets and SU-25 ground attack planes would cost about 75 million euro per year (an estimate based on current expenses). Additionally, the Air Force needs to invest in maintenance and upgrades of its other aircraft, including transport and training planes as well as helicopters.

Finally, an estimated project for the purchase of 3D radars would cost an additional 150-200 million euro.

SEA: In November 2020, Bulgaria signed a contract with German shipbuilding company Lurssen Werft for the construction of two modular patrol ships worth an estimated 500 million euro. The price is to be paid in instalments over 9 years.

In 2020, Sofia also purchased two retired minesweepers from the Netherlands for 3 million euro. An additional estimated 100 million euro would be required for the retrofitting of these and other second-hand ships purchased from NATO allies.

The Defense Ministry has also approached Italy and Norway with plans to purchase a second-hand submarine for an undisclosed sum in an attempt to revive Bulgaria's undersea warfare capability.

LAND: The biggest project for modernization of the land forces is the planned purchase of 150 armored fighting vehicles (AFVs) for 730 million euro. The project is unlikely to be pursued by the end of this government's mandate, as the two shortlisted companies have offered significantly higher prices.

In December, the Defense Ministry signed a 25-million euro contract with Bulgarian armored car manufacturer Samel-90 for the delivery of 98 multipurpose armored vehicles.

Also in December, state-owned Terem was assigned with upgrading the Army's main battle tank, Soviet-made T-72, for close to 40 million euro.
After Bulgaria spent a record $2.2 billion on defense in 2019, mostly on a one-off purchase of fighter jets from the USA, the government cut spending on military hardware to $980 million in 2020.

Bulgaria is rearming! After three decades marked by dereliction of duty, Sofia is finally catching up. It has ordered eight advanced US fighters for its Air Force and is planning to buy eight more by 2024. It has also agreed with a German shipbuilding company to construct two patrol vessels for its Navy and is likely to order 150 armored vehicles for its mechanized infantry. Add to that pledges to spend about two to three billion euro on new hardware over the coming 5-10 years alone, and the promises seem bold indeed, including ones to resurrect the scrapped submarine fleet.