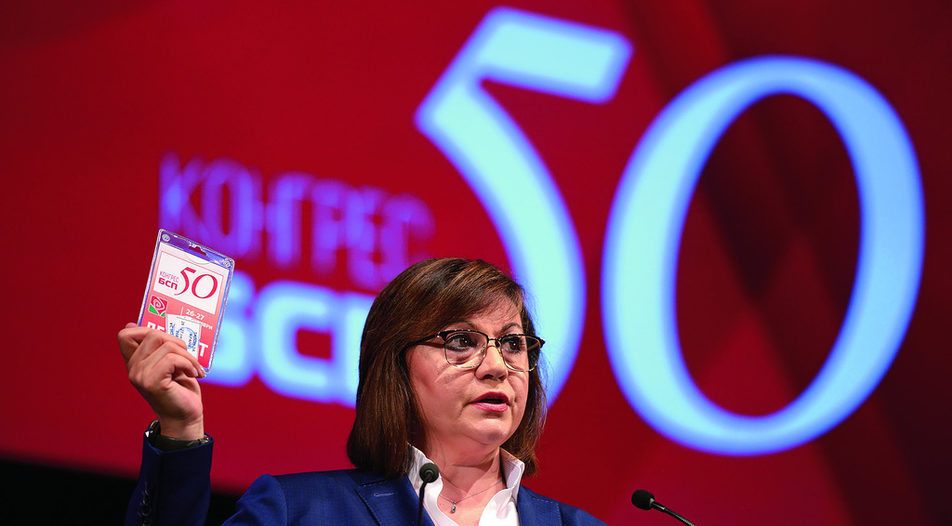 Bulgaria’s second party strives for the prime spot after months of anti-GERB protests. Who are the party’s movers and shakers?

- It remains to be seen whether BSP can garner enough public trust for its program and purported anti-corruption fight
A year ago few would have believed that the internal leadership elections of the BSP would mean much for the wider Bulgarian political landscape in 2020. After a long and dirty political campaign Korneliya Ninova, the BSP leader since 2016, managed to secure a second term as leader of the biggest opposition group in parliament on September 12th with a landslide victory.

These internal elections and the subsequent party congress were not just about the leadership of the socialist party for the upcoming four years. They were seen as a battle for BSP's future as a viable opposition to GERB, as well as a bid by Ninova to quash her detractors in the party.

This leaves the BSP leader emboldened - she received widespread support and her faction now holds a comfortable majority within the party's National Council. In theory, this means the BSP can finally turn its back on internecine squabbles and concentrate on defeating its long-term opponent GERB at a time of continuing anti-government protests and when the BSP is drawing level with GERB in the polls.

The September 12 leadership elections signalled a new phase in the BSP's history. Until then, the party leader had always been elected by the delegates, representing different regions at the party's Congress, who number just under 1000. According[U1] to Capital's sources within the BSP, this situation has traditionally led to the position of party leader is a compromise between 10-15 big names in the party, who then assume that the leader works in their interest. Such a compromise also applied to Ninova's election as leader in 2016, when her election ousted the previous leader, Mikhail Mikov, who had the dubious distinction of achieving the lowest parliamentary quota in the party's history - only 39 MPs out of 241.

Buoyed by her successful presidential campaign for Rumen Radev in late 2016 and her leadership "honeymoon", Ninova was initially able to pass three key reforms that would later alienate half the party. Specifically, direct leadership elections, in which all party members vote, a two-term limit for the party leader and a three-term parliamentary limit for any party member. "This was a groundbreaking shakeup in the power relationships within the party, which empowered the party's regular members by allowing them to vote on the important matter of leadership," noted the BSP's parliamentary group's speaker Alexander Simov. The three-term parliamentary limit, designed to open the way for fresh blood, deprived much of the "party royalty" of parliamentary seats they had held since the beginning of the 90s.

These changes made enemies of large swathes of the BSP elite, which was well-represented in Ninova's National Council. Three consecutive election losses after Rumen Radev's presidential victory caused big internal rifts in the period leading up to the leadership election and prevented the BSP from focusing on the political crisis engulfing Bulgaria since July.

Korneliya Ninova's key opponent for the party leadership was the vice-chairman of the party and her erstwhile right-hand man, Kiril Dobrev, who is also the party's organizational secretary - a powerful position. During the run-up to the election, battle lines were clearly drawn. Ninova stressed the BSP's 5 (failed) votes of no confidence against GERB and that the party had always refused to appease the "mafia-oligarchic model of governance" that characterized GERB's decade in power. Dobrev, for his part, called for a more consensus-based approach to the BSP's behaviour in the political arena, claiming that Ninova's confrontational style had thwarted possible change.

"In order to defeat GERB, we need a strong opposition party, in which people can believe. Bulgarians believe that BSP, with Ninova as its face, are only a pretend opposition." Elena Yoncheva, MEP (BSP/PES)
Advertising

Although Dobrev claimed GERB was always the overriding enemy, leaked partial recordings from May this year emerged of him hinting at being "open to meddling with GERB". This tallied with insiders' views that Dobrev "dreamt of a grand coalition with GERB at the next elections". Dobrev only emboldened his critics when he received a leadership nomination from Georgi Gergov, the leader of the Plovdiv party organization and an opponent of Ninova, who is notorious for his business links to GERB. Dobrev himself is a millionaire, with a "Capital" investigation from August this year drawing direct connections between him and a slew of businesses in the energy and construction sectors. All rely on public tenders to be successful - something necessitating either direct or tacit approval from GERB.

Ninova's campaign capitalized on this and managed to define the leadership contest as a battle between diehard opponents of GERB and its excesses, and those willing to appease it. The anti-GERB strategy worked and managed to draw more than half of party members to the ballot box, so quashing an opposition strategy which had sought to nullify the contest by gambling on a turnout below 50% of eligible voters.

In total, 67% of the 80 000 active members voted; of these 81.5% backed Ninova and only 14.9% supported Dobrev. This not only grants Ninova a second term, but also cements her structural reforms within the party.

After securing a second term, the next most important vote came on September 26-27 when the National Congress, composed of 1000 delegates, picked a new National Council. Over the past two years in particular, every single decision of Ninova's governance team had turned into a fraught battle against different opposition factions in the Council, united in their dislike for her.

According to Capital's sources, it was Dobrev's support within the National Council that had secured narrow victories for Ninova's initiatives during much of her first term. This changed as Dobrev's influence waned after the November 2019 elections and especially from January 2020 onwards. In the period leading up to the elections, it became painfully clear that, without Dobrev's support, Ninova no longer had a narrow majority in the National Council.

Over the past two years, every important political decision in BSP has turned into a confrontation for and against Ninova, which has weakened the party

Empowered by the mass support of party members, Ninova sought to provide herself with a comfortable majority in the new Council, lest she end up in the same situation as in her first term. Ultimately, the September 26-27 Congress gave her exactly that. Notable opposition figures within the BSP were not reelected into the Council by the delegates, including ex-prime minister and Party of European Socialists (PES) President Sergei Stanishev, ex-parliamentary chairman Georgi Pirinski, ex-chairman Mikhail Mikov, the members of parliament Valeri Zhablyanov and Krassimir Yankov, who also ran in the leadership elections and together garnered around 2.5% of the vote and many others, while key supporters and protégés of Ninova won the most votes among the delegates. According to Capital's sources, Ninova now has at least a 2:1 majority over her opposition, nearing perhaps to 3:1.

Interestingly, however, her arch-enemy during the elections, Kiril Dobrev, comfortably made it into the 185-strong National Council, together with around 25 of his close supporters. So far he has called for party unity. The official explanation is that after Ninova's landslide leadership victory the Congress ousted many of her opponents. However, even her landslide support wouldn't have secured this, so rumor has it among unofficial "Capital" sources and some BSP leading figures that she brokered a deal of sorts with Dobrev.

Two days after the Party Congress ended, two of Ninova's opponents - Valeri Zhablyanov and Krassimir Yankov, who was also ousted from the National Council, declared that together with four other MPs, they would leave the BSP's parliamentary group and sit as independent representatives, with five of them also leaving the party. They blamed Ninova's deal with Dobrev, alleging she had destroyed the party through her confrontational approach which had led to three election defeats. They charged that Ninova was turning the party into a self-serving leadership project rather than a democratic socialist structure.

While their departure hurts the BSP's standing in parliament, it is unlikely to actually make a difference - the party is currently vastly outnumbered by the ruling majority. The departure of known critics of Ninova might also serve to unite the party, believes sociologist Dobromir Zhivkov. Also, it's possible that these elections have helped to solidify the BSP's hardcore support, but the base hasn't really grown. The BSP is currently polling level with GERB but Zhivkov believes the support is 'soft', stemming as it does from a protest vote.

The fight against corruption

Even more importantly, the BSP with Ninova at the helm for a second term has to convince voters it is a viable opposition. The party has failed this test at key moments - namely during the elections for the current prosecutor-in-chief Ivan Geshev last fall when the BSP abstained from criticizing or even commenting on the procedure. Ninova and the party only started criticizing core structural issues within the Bulgarian prosecution after the mass protests in July, demanding not just Borissov's but prosecutor-in-chief Ivan Geshev's resignation.

A further schism erupted over another major judicial question. In December 2019, the socialists' parliamentary group split in half over support for the now ex-prosecutor-in-chief Sotir Tsatsarov's appointment as chairman of the powerful anti-corruption committee (KPKONPI) despite his links to GERB and Delyan Peevski and Ninova's call to vote against his nomination.

The BSP's leading MEP in the fight to shed light on corruption in Bulgaria in front of Brussels, Elena Yoncheva, has also recently laid into Ninova, calling her leadership "pretend opposition". Yoncheva told "Capital" that Ninova had remained silent regarding incriminating material Yoncheva filed with the prosecution's office concerning the scandal with PM Borissov's alleged house in Barcelona. She also said that Ninova hadn't addressed independent expertise on leaked recordings of a voice, resembling Borissov's, threatening to "burn a MEP", namely Yoncheva. "Whenever Borissov is actually vulnerable to an investigation by Bulgarian or European law enforcement, Ninova falls silent in an obvious manner," believes Yoncheva.

- It remains to be seen whether BSP can garner enough public trust for its program and purported anti-corruption fight
A year ago few would have believed that the internal leadership elections of the BSP would mean much for the wider Bulgarian political landscape in 2020. After a long and dirty political campaign Korneliya Ninova, the BSP leader since 2016, managed to secure a second term as leader of the biggest opposition group in parliament on September 12th with a landslide victory.