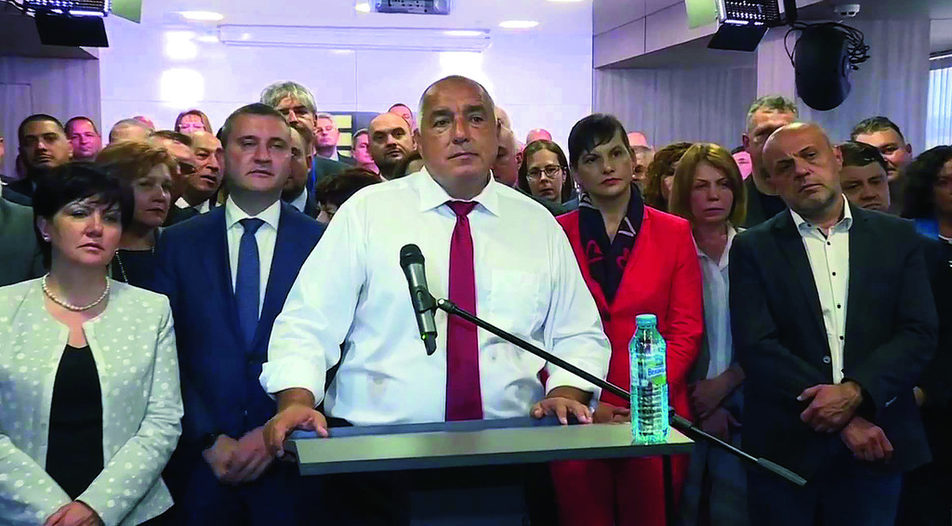 Borissov’s house of cards is shaking

"Do we look like a junta to you", asked the PM in front of all his party functionaries

Borissov’s house of cards is shaking

The Bulgarian prime minister is facing a public storm, leaking of secrets and a rampant prosecution service. This promises turbulence ahead for him and the country.

"Do we look like a junta to you", asked the PM in front of all his party functionaries

A gun, cash and gold. This is not the combination you expect to find in the drawer of a prime minister[U1] . Yet the biggest scandal in years to rock Bulgarian Prime Minister Boyko Borissov involved some pictures, allegedly of his bedroom, showing a gun on top of a drawer full of 500 euro notes and some gold.

The anonymous sender wanted to ensure people connected the drawer to Borissov, so amongst the pictures, sent to some websites, there was one showing the prime minister himself, taking a nap in a bedroom, much like the one in the other photos.

The message accompanying the pictures was quite clear, although somewhat ironic. "He keeps on thinking how to get us into the eurozone, but Borissov has his own eurozone. Each week, new stacks of money arrive and are then transported out of the EU," was part of the email, as quoted by a Bulgarian website, known for its scandalous and often unproven publications.

Normally, a publication in such a website would sink in the daily feed and disappear without much afterthought. Yet several things made it stand out. First, it is not every day that a picture of the sleeping prime minister in his own bedroom is published. It was an uneasy sight, even for his opponents, and pointed to a glaring hole in national security. This also meant that someone close to him had turned on Borissov. And last, but not least, the mail came after a string of other scandals, already rocking the government.

At the beginning of June Vassil Bozhkov - gambling and lottery oligarch, wanted by the Bulgarian prosecution - started spreading information on his Facebook profile about corruption schemes, going all the way up to the prime minister. According to his story, shared day by day, the ruling party created an elaborate scheme to allow him to pay less taxes in return for monthly payments to them. This racket, claimed Bozhkov, amounted to 20% of his profit and he enigmatically shared a picture of the prime minister's chief of cabinet and personal PR, Sevdalina Arnaudova, with the information that she visited his office regularly. Bozhkov, who is currently in Dubai, claims to have paid 60 mln leva (30 mln. euro) to Borissov and Goranov for three years in exchange for favorable treatment of his business.

The government rejected the allegations and Bozhkov has not backed them up publically by hard evidence yet (though he filed a signal with the prosecutor's office). But June turned out to be a feverish month for Borissov. On the 12th of June several media outlets received a recording with the name "Boyko unplugged" in which a voice resembling that of the PM discussed various topics, obviously with someone on the phone.

Given the nature of the topics, the recording could be dated from the end of April 2019. In it the voice claimed he had "sent" the Financial Oversight Committee (in theory an independent regulator) to "Eurohold" company to "smash his face", obviously referring to the owner of the company who around the same time had expressed a willingness to buy the Bulgarian business of the energy giant CEZ. The voice also talks about Elena Yontcheva, by that time a socialist candidate for the European Parliament, investigating corruption schemes in the construction business.

"I will burn everything down in order to burn Yontcheva. Nobody will be spared," says the voice, referring to the ongoing investigation about EU-funded guest houses, one of which is owned by Yontcheva's father-in-law. And as a curious side-note, the man speaks about his dealings with other European leaders and how he tricks them when they berate him for something. "I tell them - don't jump on me! I'm stupid and my English is bad."

The clash with the president

All of this has been rejected by the prime minister as manipulations, lies and fake recordings. Yet the effect on the public has been evident and the stories themselves have been so big that even government-friendly media couldn't avoid them. Against that background, the photographs of money and gold in the bedroom were a dangerous visual link between the rumors of corruption and the prime minister himself.

A few hours after their initial publication, a visibly stressed Borissov gathered tens of people from his own GERB party and stood in front of them and the media to deny the allegations. The pictures were obviously forged, he said, except for the one of him sleeping. "The goal is to crush us mentally, then physically," Borissov claimed, citing President Rumen Radev as the organizer of the attacks. "July is a very important month, they will neither stop me nor deter me. After that, the process will be unstoppable and in the banking union there can be no more failing banks and money laundering."

President Rumen Radev requested independent expertise of the leaked photos and recordings of the prime minister. Borissov, Radev said, is a "public procurement manager". What ensued is best described as an institutional crisis.

The prosecution service suddenly started investigating two presidential councillors for influence trading and sharing of state secrets. On 9th of July, the prosecution service entered the office of the president. That finally pushed thousands of people on to the capital's streets. The long-standing tension between the president and the prime minister boiled over when Radev announced in the square before the gathered protesters: "We have endured lies on TV for too long. It is up to us to expel the mafia from the executive branch and the prosecutor's office."

On 10th of July, the day he was supposed to be celebrating an invitation to the waiting room of the eurozone - ERM II, Borissov gave a long, not entirely coherent speech, in which he tried to downplay the events in Sofia of the previous night. "There is no coup. No one went after the president, but they are dealing with his aides, who have committed violations," Borissov said. He called the protest "organized".

What exactly is going on in Bulgaria and why is the PM suddenly under attack?

There are competing theories, but two stand out. The first one is that a fall-out with recently powerful figures in the circles of power is producing behind-the-scenes incriminating evidence of the past 10 years of Borissov rule. The existence of "rings of companies" around GERB who win procurement and EU money has been an open secret for years. Yet a direct link to the PM has been missing.

The most obvious target has been the former lieutenant of Borissov and coordinator of GERB, Tsvetan Tsvetanov. He was thrown out of the party in 2019 after it transpired that he had acquired 2 expensive apartments in Sofia at a price much lower than the market value. He is now starting a political party and attacking his ex-boss. Yet he claims it is not "my style" to work with the "compromising material[U3] " involved. A high-profile source from GERB comments anonymously that just because of the obvious utility, he thinks Tsvetanov is more likely to have been used as a decoy, rather than the real source of the leaks.

The other source, of course, could be Bozhkov or another figure from big business. The prosecution office has begun raids on some famous names, some of which might be in possession of more damning material. Even the ex-head of "Lukoil", the Russian petroleum and natural gas extraction company in the country and long-time personal friend of Borissov - Valentin Zlatev, has been called in to give explanations by the prosecution.

This leads to the second theory: that the prosecution office might be targeting enemies of Borissov against his wishes. There have long been suspicions that the prosecution is under the control of Delyan Peevski and Ahmed Dogan, two behind-the-scenes figures from the Bulgarian Turkish party who have played a crucial role in distributing government contracts and controlling the media for years. With its latest actions, the prosecution simultaneously plays the role of Borissov's partner and creates new enemies for the prime minister.

In other times this might have forced Borissov to call early elections - he has already done it twice in the previous decade. Now, however, that would mean leaving the power in the hands of the president to appoint a caretaker government. That he could not do.

So whatever the truth, the obvious result is that the prime minister's boat is shaking and he does not look in full control of the country. This will prove more and more dangerous.

A gun, cash and gold. This is not the combination you expect to find in the drawer of a prime minister[U1] . Yet the biggest scandal in years to rock Bulgarian Prime Minister Boyko Borissov involved some pictures, allegedly of his bedroom, showing a gun on top of a drawer full of 500 euro notes and some gold.

The anonymous sender wanted to ensure people connected the drawer to Borissov, so amongst the pictures, sent to some websites, there was one showing the prime minister himself, taking a nap in a bedroom, much like the one in the other photos.