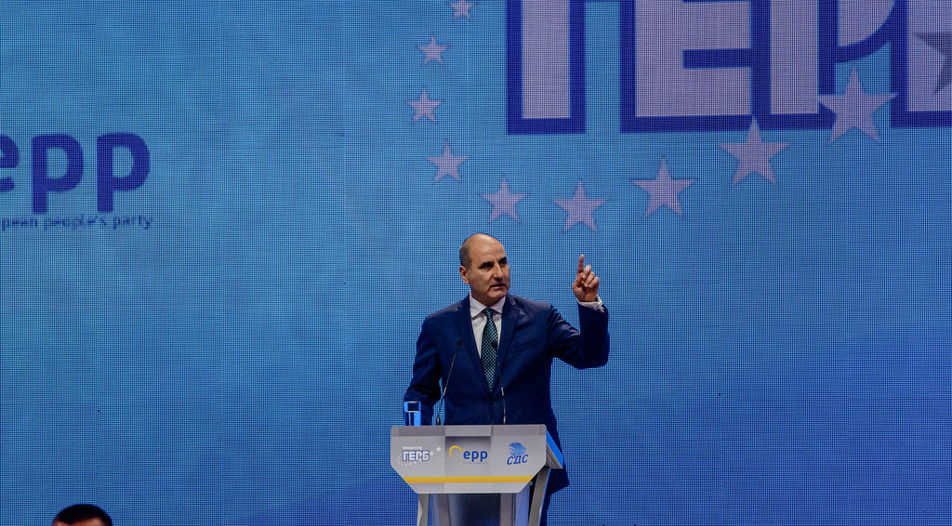 Tsvetan Tsvetanov, the senior lieutenant of GERB leader Boyko Borissov and parliamentary whip, fell from grace in less than three months because of Apartmentgate

"When you have been with a person for 18 years, it is better to keep a cool head". This is what Tsvetan Tsvetanov, now ex-deputy chairman of the ruling GERB party and former head of its parliamentary group, told bTV after he announced his resignations from all posts he held in the party that he and Prime Minister Boyko Borissov co-launched in 2006.

A month earlier, Mr Tsvetanov had announced his resignation from his position as an MP following suspicions that he and half a dozen other high-ranking GERB figures had acquired real-estate properties below market prices. While he kept his cool, the seasoned politician and the right-hand man of PM Borissov could not resist issuing a veiled warning: "A party can't be governed by one person alone."

That is true: GERB has always been commanded by two people, Mr Borissov and Mr Tsvetanov. Whereas the former's natural charisma and simple, folksy rhetoric have wooed the masses, the party would not have lasted without the latter's efforts to establish and maintain its local structures - and win elections.

Who is Tsvetanov and why is he so important?

Mr Tsvetanov has in effect been the second-in-command within GERB ever since the party's inception in 2006 and has been, in a way, an institution all of his own within the National Assembly since 2014.

He has been Boyko Borissov's right-hand man since Mr Borissov's days as Secretary-General of the Ministry of the Interior in the early 2000s, a position that launched the PM's career in politics. Mr Tsvetanov left the police force in 2005 together with Mr Borissov to become the co-founder and first leader of GERB while his former superior won the Sofia mayoral elections. Mr Tsvetanov was crucial for the party-building process in the formation of GERB and, as a long-time police cadre and ex-Minister of the Interior (2009-2013), has always kept warm ties with the ministry which possesses the biggest database on every citizen in the country.

Yet he is also infamous for ordering "special police operations" as part of the fight against organized crime in Mr Borissov's first government (2009-2013). These efforts, however, earned Bulgaria four separate penalties from the European Court of Human Rights in Strasbourg for ignoring suspects' basic rights. Needless to say, Bulgarian taxpayers fronted the bill. Furthermore, he has been considered a kingmaker in the judiciary, as a series of wiretapped conversations released in 2012 and 2013 revealed. "It is up to [Tsvetanov] who will remain in the State Prosecution, who will rise up the ranks and who will go away! You know they will now elect the Supreme Judicial Council. Their professional career depends on him," media tycoon Lyubomir Pavlov said in a wiretapped recording in 2012.

GERB's core members have always kept faith with Mr Tsvetanov despite numerous controversies involving him during his long stint in active politics. These have included a property scandal in 2009 and a series of investigations into wiretapping in the 2012-2014 period. Even so, he has remained popular with rank-and-file party members.

The king of the parliament

In Parliament, where Mr Tsvetanov acted as chairman of the ruling party's group, he was responsible for maintaining the quorum, creating makeshift coalitions with various nominal opposition forces, including the Movement for Rights and Freedoms (MRF) and Volya on different occasions. His vice-like grip over GERB MPs has even occasionally set him at odds with Mr Borissov himself. Yet he is extremely popular among the mid-ranking provincial party officers, perhaps because he is responsible for their career progression.

Yet it's highly unlikely he would use their loyalties to divide the party. "It's true that the core sympathizers of the party liked him and many of them owe him their personal and career development... just as in any other sphere of public life there are predominantly clientelist relations [within GERB], but this does not mean that [Tsvetanov] will use his supporters as proxies to split the party. Neither he, nor Mr Borissov, will win from such a move," says political scientist Stoycho Stoychev from Sofia University.

Furthermore, Mr Tsvetanov has always been an extremely efficient chief of GERB's election staff and has never lost a parliamentary or local election since 2009. His nickname Izbordzhiyata ("the election-guy" in Bulgarian) and the running gag of Mr Borissov presenting him with a brand new quality wrist watch after each win have become trademarks for the duo. Last but not least, he has forged a reputation for being America's go-to guy in Sofia. Tsvetanov has been attending various high-level events in Washington for years and has led lobbying to purchase U.S.-made F-16 fighter jets.

All this has made him an almost indispensable ally for Mr Borissov when it comes to party matters, winning elections, passing legislation and ties to Sofia's most important NATO ally. Mr Tsvetanov has also benefited from significant party support (the GERB women's association backed him without any reservations, alongside various Facebook groups consisting of Internet trolls and genuine GERB supporters) and has built friendly relations with important local newspapers, including the largest daily, 24 Chasa, which supports him almost unconditionally.

This colourful legacy, however, was shattered in a split second by the apartment scandal of March. After an attempt to downplay its significance, Mr Tsvetanov was forced to resign from Parliament. He still kept all his positions within GERB and, along with other party cadres implicated in buying apartments well below their market value, he never apologized or acknowledged any wrongdoing or immorality.

"I have nothing to be ashamed of," Tsvetanov told reporters the day before he filed his resignation in the National Assembly. He added that he had taken the decision to leave parliament in solidarity with other GERB ministers who had "done nothing wrong but accepted moral responsibility". The following day, he sat next to Mr Borissov and the leader of the right-wing Union of Democratic Forces, announcing that the two parties would form a pre-EU election pact. He kept on touring Bulgaria during the campaign but pollsters soon gauged that Apartmentgate had eroded trust in GERB. Quietly and quickly, Mr Borissov took over the campaign trail, sidelining Izbordzhiyata, at least in public.

The way ahead for Mr Tsvetanov - and GERB for that matter - is unclear. Mr Borissov has rejected the idea that he will "build" another Tsvetanov to run GERB. Yet, it's uncertain who will keep party discipline, and how, within the regional structures and the parliamentary group. GERB has enough leverage in the short term to maintain dominance in the National Assembly through cross-party deals and increasing its reliance on the MRF. However, it is hard to imagine that a rigid hierarchical structure with its "I-am-the-party style of leadership" like GERB could turn democratic overnight without unleashing factionalism.

As for Mr Tsvetanov's political future, it now looks quite bleak. In his first post-resignation interview he said he had received job offers from several private businesses and even one party. But he also stressed that he had only temporarily "hung up his boots" in the realm of politics. The erstwhile second-in-command of GERB may follow the path of former Movement for Rights and Freedom party lieutenant and izbordzhiya Hristo Bisserov, also probed for tax avoidance and undeclared earnings in 2013, but who got all charges against him dropped once he withdrew from active politics.

If this scenario materializes, Mr Tsvetanov's Freudian slip from March: "I don't feel punished because there is no one who can punish me," would be revealed as all too true, further eroding the average Bulgarian's trust in national institutions.

"When you have been with a person for 18 years, it is better to keep a cool head". This is what Tsvetan Tsvetanov, now ex-deputy chairman of the ruling GERB party and former head of its parliamentary group, told bTV after he announced his resignations from all posts he held in the party that he and Prime Minister Boyko Borissov co-launched in 2006.