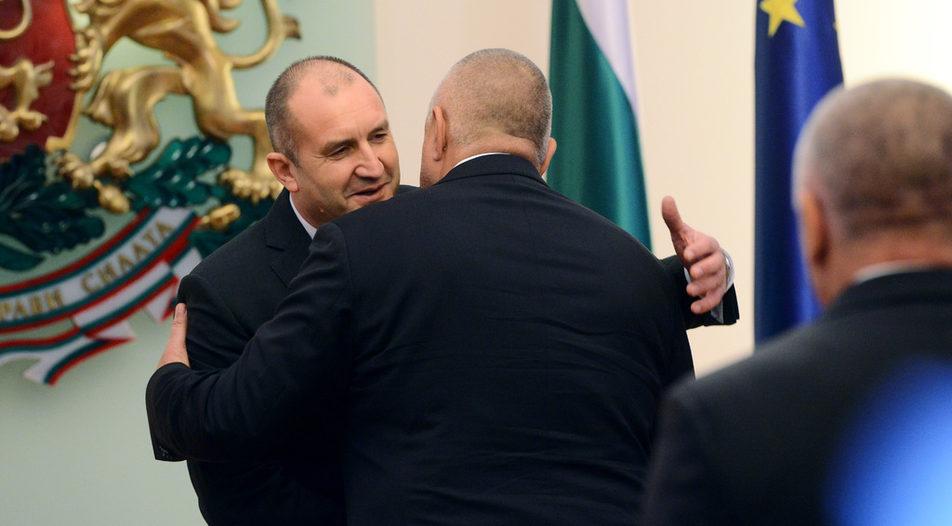 Rumen Radev steps up his game

Rumen Radev steps up his game

It takes a general to fight another general. Or at least in the field of Bulgarian politics where President Rumen Radev (an ex-Air Force general) is honing his image as the only viable opponent to Prime Minister Boyko Borissov (an ex-Interior Ministry general). In his two years as Bulgaria's head of state, Mr Radev has been building his political capital on the endless scandals within the government and the ruling coalition composed of GERB and the nationalist alliance United Patriots. Furthermore, he is not seeking support from the Bulgarian Socialist Party (BSP) that nominated him. Instead, he is acting as a lone wolf in waiting for the time to launch - or back - a new political project. While the prospects of such a move are still distant, they remain a potential challenge to Mr Borissov and his party.

Mr Radev has been at odds with Mr Borissov ever since the former assumed office in January 2017 but has grown bolder with the passage of time and experience. For example, in September 2018, Mr Radev entered a standoff with the government when he refused to dismiss the Secretary General of the Interior Ministry, Mladen Marinov, so that Marinov could be voted in as Interior Minister. The president insisted that the government must formally propose Mr Marinov's dismissal first.

Moreover, the increasingly detached and controversial policies of the parliamentary majority, on the one side, and the executive branch, on the other, only contribute to Radev's rising popularity.

The president has used his primary constitutional power to veto parliamentary bills on 13 pieces of legislation in the two years of his presidency. The most recent veto was to counter Parliament's decision to impose restrictive rules on journalists using private information for their work. This formed part of the amendments to the Personal Data Protection law designed to make it comply with the GDPR rules of the EU.

According to opponents from the media and NGO sectors, these new rules would curb freedom of expression and are not required by the GDPR regulation. On an earlier occasion, Mr Radev launched a battle to block planned changes to the Administrative Process Code that would increase court fees over seventy-fold for citizens and NGOs that were suing the state over human rights issues like police custody, discrimination or labor disputes.

So far these disagreements have not amounted to much in practical terms. After all, Parliament has overturned the president's veto on all but one occasion. Yet it contributes to the perception of Mr Radev as a lone fighter against a brazen political status quo.

Another key topic where the ex-jet fighter pilot has been at odds with the ruling GERB-led majority is the procedure for selecting a new type of fighter plane for the Bulgarian Air Force. Mr Radev described as "theatrical" the tender through which the procurement of F-16 jets from the U.S. was chosen. Taking into account the weight his CV carries, his comments produced a huge popular backlash against the parliament and cabinet decision to only negotiate with the U.S. government for the purchase of a squadron of F-16 Block 70 aircraft. It highlighted the entirely politicized choice, despite long-running claims that the selection of the new jets would be based solely on financial, technical and delivery time criteria.

One of President Radev's more progressive stances has been to insist that the spending of the yearly budget surplus should be allocated after a public debate and parliamentary approval. Traditionally, the Council of Ministers allocates the budget surplus (which has varied from 500 million to 1 billion euro in recent years), without any scrutiny from Parliament, to large and often controversial infrastructure projects, usually within hours at the end of December.

But Mr Radev is not confining his opposition to domestic politics. He is also ostensibly trying to attack the government's foreign policy, even though he looks inconsistent at times and his views sometimes clash with stated EU common interests.

This has happened several times, including during the ongoing government crisis in Venezuela. Although 19 EU countries joined Canada and the U.S. in recognizing Juan Guaido as legitimate president on 4 February and the Bulgarian Foreign Ministry followed suit, Mr Radev publically insisted that Sofia should not adopt the joint EU position regarding Venezuela. Mr Radev claimed that it is a matter of international rule of law and that violating it "won't bring positive results", echoing Russia's official line.

This is a markedly different view from his November 2018 stance on the clash between Russian and Ukrainian vessels in the Kerch Strait that led to the capturing of 24 Ukrainian sailors. At first, President Radev took a balanced position, calling for de-escalating tensions through dialogue. In a meeting with Polish President Andrzej Duda, he called on Moscow to release the sailors immediately. Three days later he changed tack and said that "Europe should not become hostage to Ukrainian domestic politics and ambitions". This comment echoed Vladimir Putin's claims that the confrontation was provoked by Ukrainian President Petro Poroshenko to justify the imposition of martial law in Ukraine in the run-up to crucial elections.

"After the large energy projects and the modernization of the armed forces failed, the notion that Bulgaria is losing its sovereignty and is incapable of making strategic decisions is taking hold. The responsibility lies with the government." - President Rumen Radev

Occasionally, Mr Radev's and Mr Borissov's positions - or lack thereof - have inadvertently coalesced, for example over the potential restart of large-scale energy projects with Russia's participation and the attempted poisoning of former Russian intelligence officer Sergei Skripal. Perhaps this can be attributed to Bulgarian politicians' wariness to potentially alienate Moscow rather than any pro-Russian leaning per se.

Message to GERB: this is not a honeymoon

Mr Radev has consistently sought to remind GERB that he would not be their 'bosom buddy' as some perceived his predecessor Rosen Plevneliev to be - someone who, after all, had won on their ticket. Yet, in his attempts to establish himself as an individualist, he is risking isolation even from the party that helped him win - BSP. Nowadays, Mr Radev has little backing from BSP and they rarely, if ever, coordinate when attacking a particular piece of legislation introduced by the ruling coalition. This gives the president the freedom to criticize the status quo but limits his scope of actions to the very narrow powers awarded to the head of state by the Bulgarian constitution.

In recent months, Mr Radev has grown bolder, saying that "the question is not whether there will be snap elections, but when" during his 2019 annual press conference. Previously, in September 2018, he said there was currently no alternative to GERB rule, but if there was - he might have backed it. This can be seen as a two-pronged approach - on the one hand, Radev implicitly said that BSP is not a viable alternative, so distancing himself from the party that nominated him in 2016. On the other hand, he suggested that a possible new formation might indeed be in the offing.

Yet, there is little sign that an alternative political project is looming. Commentators have noted that the earliest this could happen is at the time of the next regular general elections which ought to take place in 2021, provided there is no significant shakeup of the political system before then.

The President has used his primary constitutional powers to veto parliamentary bills on 13 pieces of legislation during his two years in office but this has not amounted to much in practice, as Parliament has overturned all but one of these vetoes
This gives President Radev time to build up his support network, find cadres to set up his local structures (simultaneously playing the low-risk, high-return game of bashing the GERB-led government without having to actually propose a concrete political or policy alternative), and establish his own tough-guy charisma, mirroring the image of PM Borissov. For the time being, he has limited himself to the creation of a "Strategic Development Council" with members including "intellectuals and highly qualified specialists" whose aim would be to "recommend alternatives to the institutional blockage and economic and ideological stagnation". Most of them, however, can hardly be called "new faces", as they include ex-functionaries of BSP and NDSV, the party launched by Bulgaria's former king and ex-prime minister (2001-2005) Simeon Saxe-Coburg-Gotha.
Key points of President Rumen Radev's January 2019 speech marking his first two years in office:

- Bulgarian democracy is losing its standing;

- Lobbyist pieces of legislation take precedence over legislation in the name of public interest;

- The choice of the government to only negotiate with the U.S. for the purchase of F-16 jets is "anti-European";

- Public discontent with corruption, personal interests and dependencies is on the rise;

- The public prosecution, secret services, police and the anti-corruption agency don't dare to cross the carefully guarded perimeter around those in power - both politicians and businessman;

- The question is no longer whether there will be snap elections, but when;

- For me, new elections will be meaningful only if they include machine voting, video surveillance of the vote count and updating of the voters' lists;

- I see no basis for the partnership between the president and the government if the current course is maintained;

- I will support a new political project if it is based on values and aims to modernize Bulgaria.

It takes a general to fight another general. Or at least in the field of Bulgarian politics where President Rumen Radev (an ex-Air Force general) is honing his image as the only viable opponent to Prime Minister Boyko Borissov (an ex-Interior Ministry general). In his two years as Bulgaria's head of state, Mr Radev has been building his political capital on the endless scandals within the government and the ruling coalition composed of GERB and the nationalist alliance United Patriots. Furthermore, he is not seeking support from the Bulgarian Socialist Party (BSP) that nominated him. Instead, he is acting as a lone wolf in waiting for the time to launch - or back - a new political project. While the prospects of such a move are still distant, they remain a potential challenge to Mr Borissov and his party.