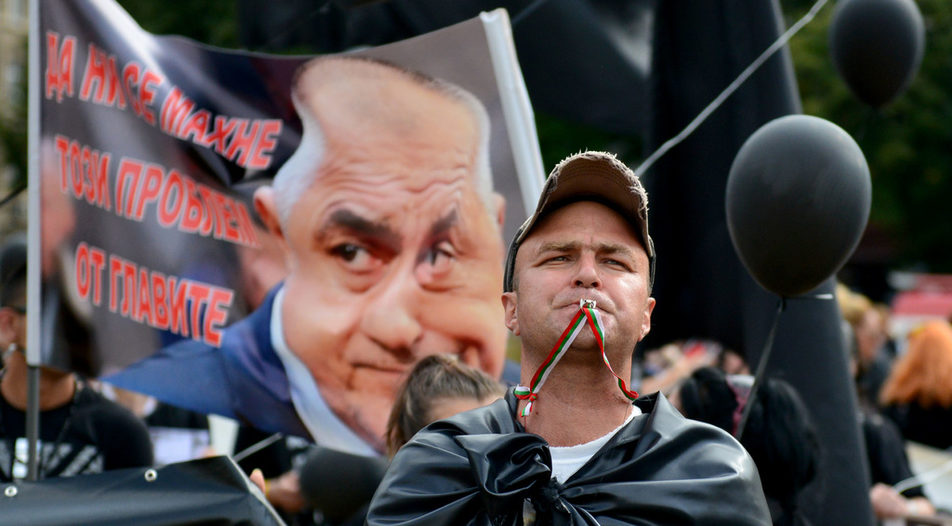 The autumn of everyone’s discontent

The autumn of everyone’s discontent

Protests calling for better conditions for disabled people and higher quality public works, through to demands to "change of the system", have rocked Bulgaria over the past three months, but there seems to be little momentum for snap elections just yet

Mr Borissov contains the protests the best way he can - by shifting blame, sacrificing secondary figures and making limited concessions to buy himself a bit more time

The shouts of "Ostavka" (Bulgarian for "resignation") and "Mafia" have lately become so commonplace in the central government district of Sofia that tour guides have probably wearied of translating them and explaining about the protestors and their associate demands. Not that keeping track is easy - scores of countrywide protest rallies and marches have taken place throughout 2018. The year started with the Save Pirin weekly marches against amendments to the management plan of Pirin National Park, a UNESCO world heritage site. In May and June bus and truck drivers blocked roads to protest against EU regulations in their sector.

In August there was mass hysteria surrounding the culling of herds of sheep in Strandzha mountain region due to fears of goat plague spreading. September saw protests against the arrest of two investigative journalists looking into a suspected destruction of evidence of fraud regarding EU funds by companies linked to infrastructure construction group GP.

In October the brutal murder of journalist and TV host Victoria Marinova in the city of Ruse sparked suspicions of possible foul play by the authorities or shady business interests linked to the government. It triggered a huge international and domestic outcry, including thousand-strong vigils in both Sofia and her hometown. Under pressure from both Bulgarians and the international community, the suspected murderer was arrested quickly but the case highlighted the huge mistrust in Bulgarian state institutions - both at home and abroad.

Tensions escalated rapidly with a series of autumn protests with various demands that revived memories of the winter of 2013 when a wave of public discontent toppled the first government of Prime Minister Boyko Borissov. Although they failed to gain the momentum of the February protests of five years ago, the current government was clearly shaken as it backtracked on some controversial decisions and bowed to street-level demands.

The longest running protest that ultimately achieved - at least partially - its goals, was by mothers of children with disabilities. The mothers' protest that went under the slogan "The System is Killing Us - All" was part of a months-long campaign for a better, more personalized social support system for people with disabilities and their families. It gathered momentum, culminating in vociferous calls for the resignation of Deputy Prime Minister Valeri Simeonov, leader of the National Front for the Salvation of Bulgaria (NFSB), on 22 October.

This followed comments by Mr Simeonov a few days earlier in an interview with his own SKAT TV in which he described protesting mothers as "shrill women" who "exploit their supposedly ill children to achieve their purely materialistic goals". The comment triggered daily protests that lasted for almost a month. Mr Simeonov received support from unexpected places, including the Confederation of Employers and Industrialists in Bulgaria (KRIB), whose chairman Kiril Domuschiev had previously been a target of Mr Simeonov's caustic remarks.

At the same time, the NFSB leader received a blow from his own coalition partner Volen Siderov, leader of Ataka ("Attack") nationalist party who demanded his head. In the end, after apologizing several times for his comment to no avail, Mr Simeonov quit on 16 November, blaming the media for a smear campaign against him and saying he only resigned to avoid causing further problems to the government coalition. Whether the protest will achieve its overarching demands - the passing of a better Disability Act by parliament, remains to be seen but so far it has shown the government's susceptibility to public pressure.

A protest that fixes cobblestones

If the "System is Killing Us" protest demonstrated that Bulgarian politicians cannot, after all, say anything without fear of the repercussions, the civic outrage regarding botched repair works in central Sofia showed that pressure on the authorities can, at least in part, lead to an improvement. This time there were no mass daily protests, but an online campaign that ridiculed the disastrous implementation of a 12-million euro project for the revamp of Graf Ignatiev Street and the square around St. Sedmochislenitshi church in the heart of the city. Dozens of memes spread over Facebook, while "city tourists" used their lunch breaks to circumvent the side panels concealing the repairs to snap photos of the tiles and cobblestones, which were so badly laid that they were even visible to the untrained eye.

At first, Sofia Mayor Yordanka Fandakova from the ruling GERB party dismissed the claims of unprofessionalism, writing on Facebook that the public needed to wait until the end of the repair work before casting judgment. A day later, however, she admitted the repairs were sub-standard and announced she would fine GP Group - one of the largest infrastructure companies in the country - up to half a million euro if it did not re-do the job properly. The company quickly summoned its workers to fix the badly placed cobblestones and tiles. In December, the vice-mayor for transportation, Evgeni Krusev, resigned after the prosecution office launched an investigation into the repairs and his role in assigning the public procurement.

Last, but not least, came the latest protests proclaimed as anti-systemic action. They were sparked by a combination of rising fuel prices and changes to motor vehicle legislation made by the parliament at the beginning of November. These changes included imposing higher environmental taxes on older vehicles and increased prices of motor third-party liability insurance.

Although they did not attract more than a few hundred people at a given place and time, they reminded the GERB-led government of the protests against high electricity bills in the winter of 2013 that ultimately turned violent and led to the resignation of the first cabinet of Boyko Borissov. The GERB leadership was definitely concerned about the protests that blocked roads and cities across the country for a number of weekends in late 2018. "Protests are part of the democratic processes, but it's a tendency of some to seek to destabilize the country," Tsvetan Tsvetanov, leader of GERB's group in parliament, told a press conference.

Observers said the outburst of social disaffection was not surprising and reflected the long-standing economic and social divisions across the country.

"These are once again protests with primarily social demands, rather than demands for better governance - like the protests of the summer of 2013," Parvan Simeonov, a sociologist from Gallup International - Balkan commented. "It is clear that they organized quickly and that certain interests may be behind some of the protests, but they will only succeed in attracting support if there is a niche for that. And there is one now - rising consumer prices and social divisions."

Yet the momentum of these protests seems to be wearing down and there is little prospect of PM Borissov facing a snap election now. Despite the multitude of ongoing protests with various demands - to which we can add the anti-pollution marches across some bigger cities and the rally of workers from Maritza East 2 thermal power plant and coal miners in late November - they have so far failed to speak in one voice or find a unifying theme.

What is more, Mr Borissov is managing to contain them the best way he can - by shifting the blame, sacrificing secondary figures and making limited concessions to buy himself a bit more time.

Lastly, the opposition seems unable to present itself as a viable alternative - be it the domesticated parliamentarian opposition of the Socialist Party, or the Movement for Rights and Freedoms, which achieves its goals in more subversive ways, or the liberal Yes, Bulgaria movement which is still failing to make its voice heard.

So, don't expect too much from the protests - at least for now.

Mr Borissov contains the protests the best way he can - by shifting blame, sacrificing secondary figures and making limited concessions to buy himself a bit more time

The shouts of "Ostavka" (Bulgarian for "resignation") and "Mafia" have lately become so commonplace in the central government district of Sofia that tour guides have probably wearied of translating them and explaining about the protestors and their associate demands. Not that keeping track is easy - scores of countrywide protest rallies and marches have taken place throughout 2018. The year started with the Save Pirin weekly marches against amendments to the management plan of Pirin National Park, a UNESCO world heritage site. In May and June bus and truck drivers blocked roads to protest against EU regulations in their sector.