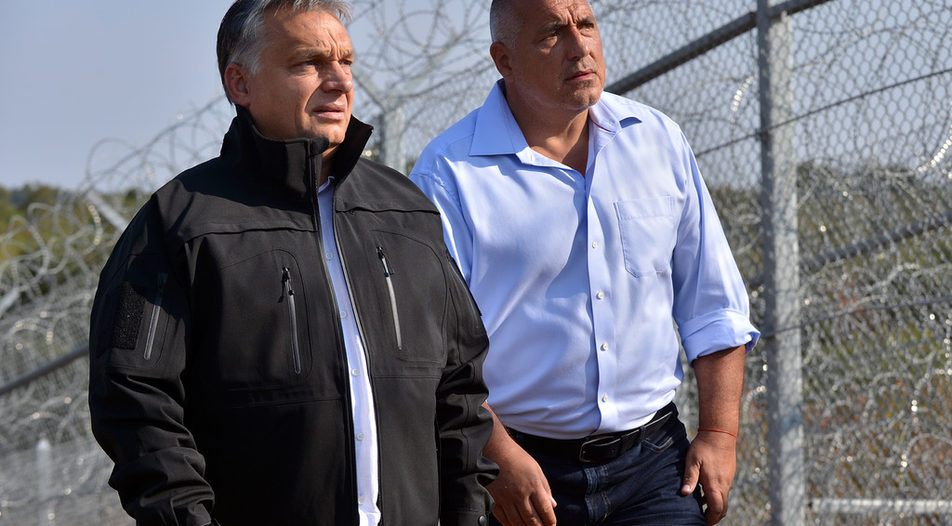 A dance with anti-liberalism

The two strongmen and the fence: Hungarian PM Victor Orban and Bulgarian PM Boyko Borissov have a shared interest in preventing migration into the EU

A dance with anti-liberalism

There are enough signals that Bulgaria is on the verge of joining the illiberal camp of Hungary and Poland in the EU, yet the government dare not take the final step

The two strongmen and the fence: Hungarian PM Victor Orban and Bulgarian PM Boyko Borissov have a shared interest in preventing migration into the EU

Up until a few years ago, Bulgarian politicians and their parties had at least two separate public faces - one for their domestic audience and one for external partners. This helped the governing GERB portray itself as a centre-right, reformist party committed to establishing the rule of law despite endless evidence to the contrary. It also allowed the Movement for Rights and Freedoms (MRF) to pretend to be a liberal party despite clearly being a corporation exploiting the benefits of a guaranteed ethnic vote (the party mostly represents Bulgaria's ethnic Turks and Muslims). The Socialists also somehow preserved their appearance of being a modern left-wing party despite housing dozens of former officers of the Communist-era secret police and some of the country's richest oligarchs.

In the past few months, however, the masks began to drop. Following its victory in March 2017 snap elections, GERB openly entered an unholy alliance with an ultranationalist coalition, the United Patriots, allowing a xenophobic political force in government for the first time in modern Bulgarian history. The Bulgarian Socialist Party (BSP), for its part, shed any remaining hopes it could transform itself into a progressive left-wing party thanks to its new leader, Kornelia Ninova, and anti-immigrant rhetoric even in 2016 that would have shamed some of the right-wing parties. Against all odds, MRF is the only party that has maintained the charade so far.

The unholy alliance of the left and the right

The left and the right, who rarely stop bickering in Parliament, again joined forces on an international issue in September. Parties of various colours backed a proposal for Bulgaria to oppose the then-pending vote on triggering Article 7 procedure for stripping Hungary of its voting rights in the Council of the EU for undermining democratic values. At the time, Ataka, one of the three nationalist parties forming the United Patriots coalition, issued a motion for Parliament to push the Bulgarian government into backing Hungary's leader, Viktor Orban.

The party's call was endorsed both by Volya, the party of businessman Veselin Mareshki and the Socialists, although Orban is a staunch foe of left-wing parties in Hungary.

At the same time eight of Bulgaria's 17 MEPs, including five from the European People's Party (EPP), one from the group of Socialists and Democrats (S&D) and two from the European Conservatives and Reformists group (ECR), opposed a European Parliament declaration that said Hungary was at "clear risk of a serious breach" of EU core values, including judicial independence, academic freedom and freedom of expression. Five others abstained or skipped the vote.

What is more, under nationalist influence, the Bulgarian government announced it would propose to back Hungary if the disciplinary procedure under Article 7 of the Treaty of the European Union unfolded further. "What they are doing to Hungary and what they try to do to Poland is a repressive measure. The arguments are the same, like the ones the USSR used in 1956," Krassimir Karakachanov, Defence Minister and leader of VMRO, another party of the United Patriots coalition, said, referring to the Soviet invasion of Hungary that year.

Prime Minister Boyko Borissov has hinted several times that his government will not back continuation of the Article 7 procedure. He has clearly indicated that he is against "the European Commission's interference in the EU Member States internal politics".

Anti-liberalism on the rise

In the past couple of months the anti-liberal tendencies not only in the government, but of the entire political status-quo in Bulgaria, have become more and more ostensible. In the early days of 2018, while the country was taking its first stint as President of the Council of the EU, almost all parties in Parliament joined to block the ratification of the Convention on Preventing and Combating Violence against Women and Domestic Violence of the Council of Europe - known as the Istanbul Convention. This followed a brutal campaign by the ultra-conservative wing of the nationalists, backed by religious groups and the Socialists which transformed public discourse about the convention. Somehow they managed to convince a gullible public that the document would open the gates to legalizing gay marriage.

The same story was repeated, albeit in a shorter, less dramatic form, regarding the UN Global Compact for Migration. In early November, MEP Angel Dzambazki (VMRO/ECR), who is one of the popular faces among the budding nativist-conservative influence groups in Bulgaria, denounced the agreement that aims to regulate the treatment of migrants around the world and rejoiced over the government's decision not to join it. Without elaborating, he only said at a news conference that the Compact "runs contrary to our national interests" - just like his nominal political opponent Ms Ninova had done a few days earlier in Parliament.

She attacked the Compact, comparing it to the Istanbul Convention. "There are some good measures prescribed in the Compact but, as in the case of the Istanbul Convention where the issue of domestic violence was covering the idea of gender uncertainty, the Compact hides the agenda of stimulating migration and classifies it as a good and inevitable phenomenon," Ms Ninova said, alleging that the main point of the pact is to "transform illegal migration into legal one".

In both cases an international document, long touted by both Bulgarian diplomacy and domestic bureaucracy, was picked on by conservative political forces at the time of its adoption, after months and sometimes years of negotiations. The same forces, which have representatives both within government and the opposition, managed to engineer a mass media outcry and public hysteria about some perceived "hidden" purposes of the international document. Then the document, and all its terminology, become a punch bag for every political force, including ones that backed it in the past, and it gets dumped.

Prime Minister Boyko Borissov, who still tries to portray his party and his country as supporting the centrist majority in Europe, quickly stated that the decision would have "no legal value" anyway (the migration Compact is only a political declaration).

"Mr Borissov has persistently tried to maintain the notion that Bulgaria is not on the path Hungary has taken, and is not backing Mr Orban in his controversial decisions," says Vessela Tcherneva, head of the European Council of Foreign Relations in Sofia, adding that, in her opinion, Europe still does not consider Bulgaria to be one of those countries on the 'illiberal' side of the fence.

Another example of this is the counsel Mr Borissov gave to Viktor Orban at the European People's Party conference in Salzburg in September. Back then he advised his Hungarian counterpart "to correct some of his policies", including his pressure on the Central European University in Budapest and the tough crackdown on migrants.

Yet, these examples, among others, showcase several worrying trends. Firstly, Sofia is gravitating towards the Central and Eastern European states on various controversial issues, usually around identity politics and the rule of law. This virtue signalling has been mostly ignored by the West (which has much more pressing questions than Sofia) so far, but might contribute to Bulgaria being sidelined into the slow lane of the so-called two-speed Europe.

Secondly, the positions vis-à-vis the two international pacts attest to the growing significance of nationalist conservative forces in Bulgaria. The easier their victories, without much opposition from within or without, the more popularity they gain. In so doing they shift the public discourse further to the right. Time after time the ruling GERB party has capitulated to populists' demands and has only responded with more populism. It's a pattern which is turning into a political race to the bottom, destructive to both Bulgaria's international standing and the viability of its institutions.

The collateral fallout could lead to a resurgence of Euroscepticism among Bulgarians. The liberal minority are already wearying of the EU's complicity with the status quo in Sofia, while the majority, which simply follows the tide, will get used to the conservative anti-EU rhetoric.

Up until a few years ago, Bulgarian politicians and their parties had at least two separate public faces - one for their domestic audience and one for external partners. This helped the governing GERB portray itself as a centre-right, reformist party committed to establishing the rule of law despite endless evidence to the contrary. It also allowed the Movement for Rights and Freedoms (MRF) to pretend to be a liberal party despite clearly being a corporation exploiting the benefits of a guaranteed ethnic vote (the party mostly represents Bulgaria's ethnic Turks and Muslims). The Socialists also somehow preserved their appearance of being a modern left-wing party despite housing dozens of former officers of the Communist-era secret police and some of the country's richest oligarchs.