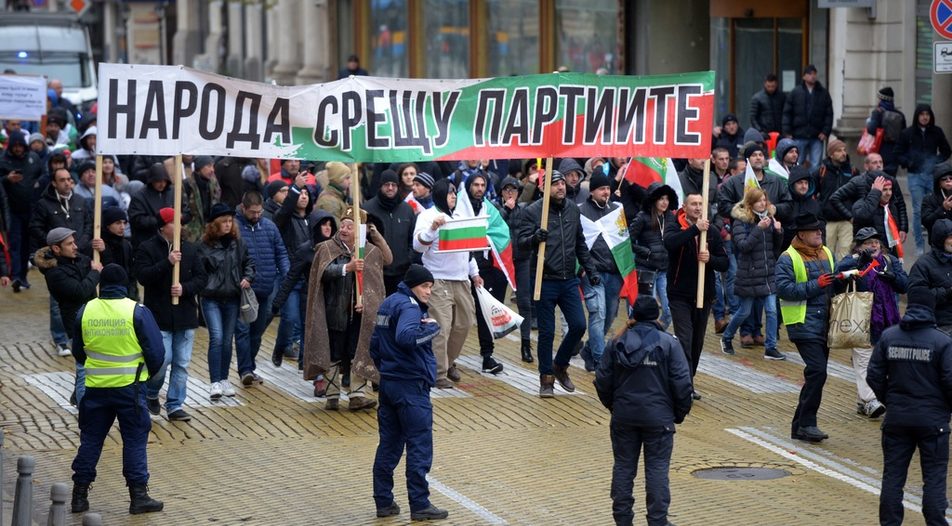 A crisis of trust in public institutions, a series of protests and a readiness to vote for the status quo, i.e. the ruling GERB party. This encapsulates the mood of public opinion over the past few months.

It may seem absurd to certain observers, normal to some, and irrelevant to others. However, opinion polls from the last ten years invariably show that Bulgarian citizens have a chronically low level of trust in key state institutions such as parliament, government, law enforcement and judicial authorities. Several examples attest to this:

- The last three parliaments started their mandates with an approval rating of about 15%, a percentage that dropped to single digits by the time of their dismissal from office;

- The last three governments started with an approval rating of about 25%, which fell to about 15% at the time of their resignation;

- The approval rating of the courts and prosecution has stayed within the 10% limit for the past ten years;

- Political parties and their leaders are unable to garner enough authority in the eyes of the public;

Amid these steadily negative tendencies, political elites display inexplicable arrogance. They view public dissatisfaction as an empirical fact that has little bearing on the standing of political parties. In the best-case scenario, they use it as a powerful tool with which to attack opponents, but more often than not, they sidestep it with a disparaging "it's always been like that".

This, however, doesn't change the way institutions function, nor does it neutralize public criticism. It's precisely the opposite - the public sphere, which these very institutions are called upon to uphold and improve, continues to disintegrate, and public mistrust has deepened to an extent unsuspected by the ruling elites. Ten years ago, people just looked for the next political entity to replace the current one, believing that a political reshuffle was enough to improve the work of institutions. With time, the focus has gradually shifted towards the search for alternative institutional norms, and the slogan "system change" has acquired a special relevance.

Hence we're increasingly witnessing news events that provoke a sharp, uncontrollable, and almost ineradicable anger. Regardless of events, irrespective of the reactions of government and institutions, the public response is "We don't believe you".

Several big stories from 2018 (different in nature, but similar in terms of reaction) perfectly illustrate this:

- The goat plague that afflicted livestock: it seems there really was such an epidemic and the danger was real. Institutions probably dealt with it according to the rule book. Nonetheless, neither those directly affected by the culling of their animals nor wider society, believed them;

- The bus accident near Svoge, in which 20 people lost their lives: the three simultaneous ministerial resignations that ensued were approved by the public. At the same time, however, most Bulgarians remained suspicious and insisted that responsibility be extended to all administrative levels involved. This incident clearly demonstrated that acceptance of political responsibility alone no longer suffices when it comes to generating public trust.

- The murder of journalist Viktoria Marinova in Ruse: a vicious crime, which initially received a political interpretation that went beyond the country's borders. This was made possible by the deep mistrust and permanent suspicion towards the government.

The public's refusal to trust institutions poses a series of risks but one of them is prominent and problematic - the tendency to support purely populist demands and appeals to change the system. The protests in late 2018 are but the latest example of Bulgarian society's ever-growing unruliness.

There are several possible scenarios for how this ongoing, cumulative public mistrust will end. The first: voters will continue to support the leading parties due to the absence of a convincing and acceptable alternative, the grave crisis in confidence notwithstanding. This is a possibility borne out by the current opinion polls. The second: the wave of public dissatisfaction could bring outright populists or anti-establishment players to power. The result - an intensified crisis will follow instead of the necessary solution. The third: a reasonable political alternative emerges and participates in government, bearing responsibility for the state's role in the creation and upkeep of the public sphere. The latter eventuality might curb public hysteria.

Which of these three scenarios we will witness depends on the existence of an appropriate political alternative. For the time being, no electorally relevant political entity that could empirically represent voters' inclinations has appeared on the scene.

A crisis of trust in public institutions, a series of protests and a readiness to vote for the status quo, i.e. the ruling GERB party. This encapsulates the mood of public opinion over the past few months.

It may seem absurd to certain observers, normal to some, and irrelevant to others. However, opinion polls from the last ten years invariably show that Bulgarian citizens have a chronically low level of trust in key state institutions such as parliament, government, law enforcement and judicial authorities. Several examples attest to this: