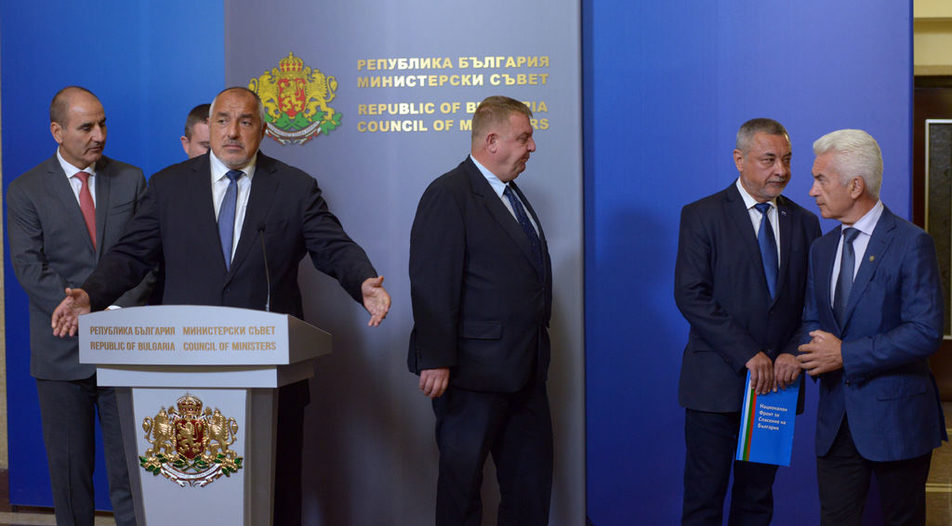 Bulgaria's ruling coalition - everyone is looking into different directions

Bulgaria's ruling coalition - everyone is looking into different directions

A tragic bus crash at the end of August claimed the lives of 17 people, becoming the last straw to break the imagined stability of the Bulgarian coalition government.

While Prime Minister Boyko Borissov hoped that he can ride on the momentum of Sofia's presidency the Council of the EU in the first half of 2018 for a while longer, persisting and yet persistently ignored domestic issues finally caught up with him. Now he is in a difficult situation where he has to mitigate public anger, appease his unruly coalition partners and even watch out for dissent within his own party.

The event that sparked the crisis was the 25 August bus crash near Svoge, a town north of Sofia. While the circumstances surrounding the deadly accident are still unclear, it raised serious public concerns about the quality of roads, the political connections of the companies that are winning public procurement tenders to build and maintain them, as well as about the adequacy of bus transport safety regulations.

In April this year, another deadly crash on the Trakia Highway led to promises by the government that the regulations will be changed to make wearing seatbelts compulsory in buses and will force bus companies using older buses to install belts. Needless to say, no such actions have been taken by the relevant institutions since then. Moreover, the announcement by the Road Infrastructure Agency that it has repeatedly warned Trace Group, the company that had recently repaired the road section where the crash took place, and had to maintain it, about its poor condition, sparked an even greater public outrage.

The crash, however, was just the tip of the iceberg of scandals and crises that engulfed Bulgaria during the summer months. Some of them include the passing of lobbyist legislation that favors large fuel retailers like Lukoil Bulgaria, an increase of court fees in cases when citizens challenge government decisions, the collapse of the Commercial Register that blocked the compulsory registration of business deals online, the bankruptcy of the fourth largest car insurer, Olympic According to the results of a June poll conducted by Alpha Research, Bulgarians still hold Mr Borissov in high esteem following Bulgaria's EU Presidency which passed without any major mishaps, but want him to turn back to the most pressing domestic issues.

Responsible but not guilty

After realizing that he had to let some steam off after the bus crash, Mr Borissov demanded the resignation of not one, but three government ministers, all of them from his own GERB party. Interior Minister Valentin Radev, Transport Minister Ivailo Moskovski and Regional Development Minister Nikolay Nankov obeyed his order immediately, announcing their resignations just an hour after the PM asked them to step down. Notably, they never said anything they did as heads of their ministries was to blame for the accident itself.

Asked why he was resigning, and if he felt guilt about the deadly accident, Mr Radev said at a press conference where he and Nankov announced their decisions to leave their posts: "As leaders of the respective ministries, we were unable to protect you from this tragedy and we take the political responsibility for it."

Even before Mr Borissov was attacked by his main political opponents - President Rumen Radev and Socialist Party leader Kornelia Ninova, he started receiving threats from some of his coalition partners in the United Patriots (UP) alliance. United only in name, the conglomerate of three ultranationalist parties - VMRO of Defense Minister Krasimir Karakachanov, the National Front for the Salvation of Bulgaria (NFSB) of vice-premier Valeri Simeonov and the pro-Russian Ataka of Volen Siderov - has rarely had a common position on anything ever since it entered government.

Usually, Mr Simeonov and his faction are highly critical of government decisions or are pushing fights of their own (the Pirin National Park regulations, excessive noise in summer resorts), Ataka's Siderov is siding with the government even at the expense of intra-UP unity (especially if the government is not critical towards Russia), while Mr Karakachanov is trying to balance between the two.

This is exactly what happened during the attempted government reshuffle. While Mr Borissov and his party were searching for potential substitutions for the three vacant posts, NFSB gathered at a national council, threatening to quit the government if the PM does not change his way of taking key decisions 'unilaterally'.

In a declaration, Mr Simeonov's party criticized Borissov for the way he is managing his subordinates, adding that the "illogical changes of ministers, vice-ministers and other members of the state administration create professional deficiencies and undermine the fulfilment of the government program". This resulted in a furious public response by UP co-chair Volen Siderov, who told bTV that the government will carry on "with or without NFSB".

After a meeting of the GERB-UP coalition council, tensions subsided in the name of preserving stability ("What is more important - to remain in government and not throw the country into chaos, or to fall apart and not know what will follow? We decided that the latter is worse for the country", Mr Siderov asked reporters rhetorically), but raised more questions about how predictable the current coalition is.

It is, however, not unlikely that the exchanges between Mr Simeonov and Mr Siderov are part of a theatrical play aimed at raising tensions and the stakes of the UP in the government. The NFSB leader does not hide his claims for the position of tourism minister and his disdain for the GERB head of the ministry, Nikolina Angelkova. "This position [of minister of tourism] has been promised to a representative of the NFSB," Mr Simeonov said during a press conference before the meeting of the government coalition council.

The short substitute bench of GERB and more troublemakers

The coalition partners of GERB were only the first stumbling block before the government reshuffle. Just a few hours after the announcement of the new nominations for the three ministerial chairs - Petya Avramova for Regional Development Minister, Alexander Manolev for Transport Minister and Mladen Marinov for Minister of the Interior, findings about controversial parts of their biographies started emerging.On September 13, Mr Manolev declined his nomination following what he called "a coordinated attack from a certain group trying to sabotage my work with clumsy claims" and threatened court action over the reports. The said group was Capital weekly, which published already known facts about his murky business past, the politically connected business of his father and his participation in a car accident, all of which could be checked in public registers.

The parliamentary vote to approve the replacement of Valentin Radev by Mladen Marinov could not be held before this issue of KQ went to print because President Rumen Radev has declined to sign a decree relieving Mr Marinov of his current duties as secretary general of the Ministry of the Interior. The president claimed he has not been consulted by the government about the reshuffle, while PM Borissov called the procedure a formality.

This episode showcases a growing impotence of Mr Borissov and his party to introduce non-controversial people to high office. Additionally, it shows a growing public discontent with the government's imitation of reforms of crucial sectors that leads to nowhere. Instead, a scandal after scandal are rocking Bulgaria day after day and even pro-government media cannot ignore them.

Yet, as President Rumen Radev said in his autumn address to the nation, in the immediate future there is no alternative to the current ruling coalition in sight and the focus ought to be on reform rather than revolution. The meek protests and weak reaction of the main opposition force in Parliament, the Socialists, prove him right - for now. So, snap elections are not expected, instead expect more crisis management from the government.

A tragic bus crash at the end of August claimed the lives of 17 people, becoming the last straw to break the imagined stability of the Bulgarian coalition government.