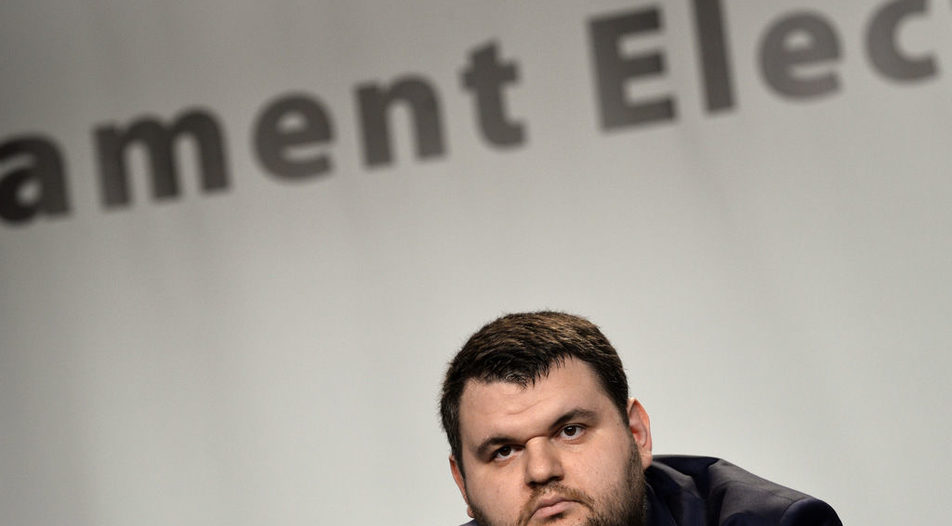 A New Image for Mr Peevski

A New Image for Mr Peevski

The controversial Bulgarian media magnate Delyan Peevski is about to part - officially at least - with his print media business. His company Intrust has said it is selling half of its newspaper business to Nu Image Bulgaria, the company which runs Boyana film studios on the outskirts of Sofia. This is yet the latest announcement of a pending transfer of ownership for Mr Peevski, who has been trying to publicly distance himself from his media businesses for the past several years now.

Since 2007, Mr Peevski has acquired a de facto monopoly over Bulgaria's newspaper business; he controls, directly or otherwise, the largest-circulation daily newspapers and newspaper distribution in the country, and has attained influence in advertising, hence in TV channels with nationwide coverage.

The amassed media power and his membership in the Movement for Rights and Freedoms (DPS), the small party now nominally in opposition that has played a key role in the formation of several government coalitions, has allowed Mr Peevski to become a major factor in Bulgarian business and politics. His mark was visible in the formation of several previous governments, while in the current one he is allegedly behind several appointments proposed by Ataka party, which forms part of United Patriots alliance, the junior coalition partner of GERB party of Prime Minister Boyko Borissov. Mr Peevski figure looms large in almost every big business deal of recent years, be it in the telecommunications, tobacco or retail sectors. Unofficial data from a leaked presentation of one of his companies shows that his businesses make a billion euro in revenue a year. In Bulgaria his name has become a synonym for oligarchic power and his appointment as director of the State Agency for National Security sparked mass protests in 2013.

This massive exposure is starting to take its toll, though. Since 2014, Mr Peevski has been seeking to move his headquarters abroad, and has already tried to transfer ownership of his print media.

Apart from the press release announcing the signing of a preliminary agreement, the two sides have provided no further information about the transaction. Capital newspaper contacted Nu Image Bulgaria's managing director, Yariv Lerner, seeking details and an explanation of the sudden interest of the film-making company in Bulgaria's print media market which has been in crisis for years. Mr Lerner did not deny the information that Nu Image may acquire part of Mr Peevski's newspaper business, published by several Bulgarian media outlets.

According to the press release, Nu Image is acquiring 50% of the capital of Telegraph Media, the publisher of Telegraph, Monitor, Politika and Meridian Match newspapers, and a shareholder in regional Borba Publishing House. Intrust is currently the sole proprietor of Telegraph Media.

"The transaction would be concluded after the approval of the Commission for Protection of Competition (CPC). The newspapers listed are amongst the leading ones in the country; Telegraph daily is the newspaper with the highest circulation and marketability in Bulgaria. Nu Image Bulgaria is creating a new sister company for the exclusive purpose of acquiring the shareholding interest," the press release reads. The name of the new company is not mentioned.

Nu Image Bulgaria is part of U.S.-based Nu Image Inc., which acquired the film production studios in Boyana in 2005. In Bulgaria it acts via its company Nu Boyana Film Studios. Nu Image is a creation of Avi Lerner; the Bulgarian film studios are managed by his son Yariv Lerner.

That transaction looked, and proved fictitious. Now, it's anyone's guess what might be the motives behind the announced agreement to sell ownership of 50% of Telegraph Media.

Guess #1: For almost nine years now film makers in Bulgaria, including Nu Image, have insisted that the government introduce tax incentives to attract foreign producers. In 2010, a draft bill went as far as to suggest that Bulgarian and foreign film companies should receive a tax credit amounting to 30% of all expenses paid to Bulgarian individuals and companies to stimulate producers to reinvest the money in filmmaking. The logic behind the bill is that the proposed tax relief is the only way for the fledgling industry to woo interest worldwide. Similar tax incentives have already been introduced in other countries in the region like Hungary and the Czech Republic, which reimburse up to 20% of the expenses producers have made within the country. Up until now, though, Bulgarian lawmakers have remained unsympathetic. The government believes that if tax reliefs are granted to one business sector, other might soon seek preferences as well.

What has all this to do with Delyan Peevski? Through the years he has proved he has a strong influence over politicians of all stripes and his interventions have often secured governmental approval for seemingly doomed causes. It is possible Mr Peevski and Mr Lerner have reached an agreement: tax stimuli for the film industry in exchange for supporting and promoting abroad the media image of the DPS MP.

In Boyana Nu Image offers a number of services run by several linked companies: film production and shooting, catering to external film and TV productions, provision of sets and technology, video and computer effects, even training and academic programs aimed at young professionals seeking a career in cinema. Some 450 people work for the companies of Nu Boyana Film Studios; a change in the law would provide a huge impetus to their business.

Guess #2: The announcement of the transaction comes after a major restructuring of the business empire of Mr Peevski, which has taken almost a year and a half and concerns holdings he owns directly or is believed to control, like Bulgartabac, whose cigarette brands were sold to British American Tobacco last year. Since the end of 2017 Mr Peevski has started merging his media publishing companies into one holding.

The restructuring began after Tsvetan Vassilev, Mr Peevski's ex-business partner and now enemy, filed a complaint against Bulgaria in the U.S. under the Magnitsky Act. It authorizes the US executive branch to ban entry to foreigners involved in large-scale corruption, money laundering or human rights violations. Mr Vassilev, who is facing criminal charges in Bulgaria over the collapse of his Corporate Commercial Bank in 2014 and lives in exile in Serbia, claims that he is being denied justice in Bulgaria and the bankruptcy of his bank was instigated by Mr Peevski. While there is no official information regarding the complaint, several sources have told Capital that Mr Vassilev's allegations are being investigated.

This is possibly the reason behind Mr Peevski's increasingly conspicuous attempts to clear his international image, including drastic measures like distributing propaganda books in English that label all his enemies criminals among European institutions and a dire scuffle with the administrators of the online encyclopedia Wikipedia over control of his biography.

Guess #3: According to another hypothesis, the announced transaction has to do with the government-initiated analysis of the media market launched by the Commission for Protection of Competition. The analysis might prove that a monopoly has been established, but this scenario is not very likely since Mr Peevski has proved, time and again, that both the antitrust body and the Supreme Administrative Court that oversees it are entirely under his influence.

Guess #4: Mr Peevski has bought the almost completed studio of private TV channel bTV, which is conveniently situated next to the Boyana film center. The studio is now part of Intrust's assets and might be leased out for free to the film company in return for media partnership. This logic is weak, though, as one might ask why Nu Image wouldn''t just buy the property without going into the media business.

The controversial Bulgarian media magnate Delyan Peevski is about to part - officially at least - with his print media business. His company Intrust has said it is selling half of its newspaper business to Nu Image Bulgaria, the company which runs Boyana film studios on the outskirts of Sofia. This is yet the latest announcement of a pending transfer of ownership for Mr Peevski, who has been trying to publicly distance himself from his media businesses for the past several years now.

Since 2007, Mr Peevski has acquired a de facto monopoly over Bulgaria's newspaper business; he controls, directly or otherwise, the largest-circulation daily newspapers and newspaper distribution in the country, and has attained influence in advertising, hence in TV channels with nationwide coverage.