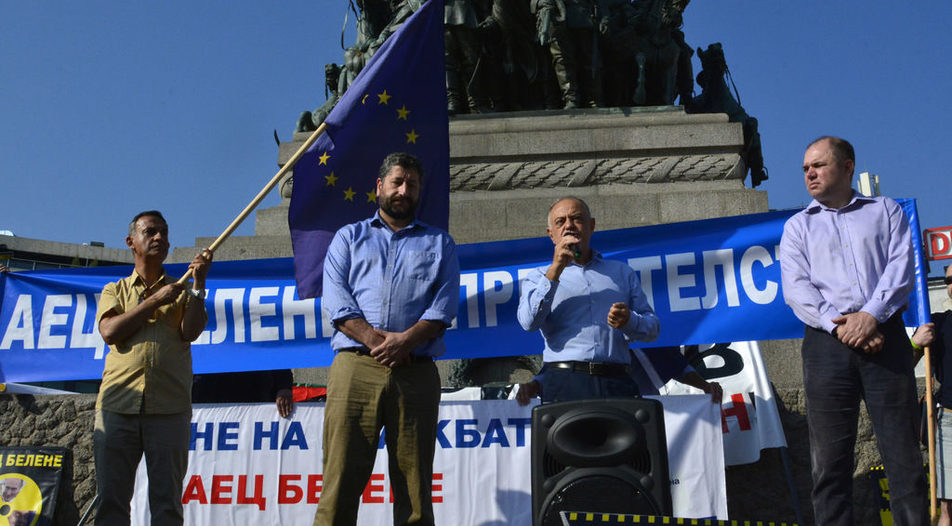 Is a civic and democratic party still possible in Bulgaria?

Democratic Bulgaria - the new liberal formation that wants to challenge both GERB and BSP, still looks more like a protest movement than a political party

Is a civic and democratic party still possible in Bulgaria?

Democratic Bulgaria - the new liberal formation that wants to challenge both GERB and BSP, still looks more like a protest movement than a political party

In April 2018 the long-awaited unification of the centre-right extra-parliamentary opposition finally took place. Democrats for Strong Bulgaria (DSB) and Yes, Bulgaria! were joined by the Greens in a new formation called Democratic Bulgaria (DB).

At the last parliamentary election in 2017 the centre-right parties ran separate lists and each of them scored below the 4% electoral threshold. Jointly, they could have hoped to gain between 7% and 9%, as demonstrated by previous elections and polls. Yet, driven by personal animosities and political misjudgement they competed against each other and remained outside of parliament. In this sense, their unification into Democratic Bulgaria is a necessary first step for their potential revival as a meaningful political force.

The problem facing DB is that it has to dispel the serious public scepticism generated by the previous record of its constituent members. At least three levels of scepticism have to be addressed by the leaders of the new formation - Hristo Ivanov, Atanas Atanasov and Vladislav Panev.

DB has to demonstrate that it has taken stock from the experience of the Reformist Block (RB) - the union of centre-right parties, which was the junior partner in the ruling coalition with prime minister Boyko Borissov's GERB in 2014-2016. RB was born in response to the mass anti-corruption protests in 2013-2014, but remained internally fragmented and could not defend its own priorities within the government coalition. GERB was ultimately successful in splitting the RB into two parts, with the most reform-oriented part effectively side-lined and then forced into opposition. Hristo Ivanov and Radan Kanev were the leaders of the factions that were ousted from the second government led by Borissov for insisting on meaningful judicial and anti-corruption reforms. These factions are now the core of the new actor - Democratic Bulgaria.

One of the main pitfalls of the RB was the very complicated and cumbersome decision-making procedure, which gave veto powers to five small parties. In DB the situation is slightly better - there are three main actors so far. Still, the leaders of DB have to put more work in order to avoid repetition of the internal quarrels within the RB, which alienated many voters.

Further, DB has to prove that it is an effective opposition and a force to be reckoned with very fast. Next year, Bulgaria will hold elections for both European Parliament and local governments, which will be the first tests for the new formation. Ramping up support by the end of this year is essential, if DB is to be successful.

DB has put forward a team of experts responsible for voicing its positions on political issues. This team is a hybrid between a consultative body and a shadow cabinet. Each of the participants is an authority in his or her field, but in order to be politically effective they need to act more strongly as a collective body. The voters are eager to see a coherent and coordinated representation of their views and the team of experts/politicians may prove to be the main instrument for achieving this result.

DB has been criticised for not being ideologically coherent, since it combines liberals and conservatives. It also has both a pro-business outlook and a green component. Its opponents from GERB lash out at these internal contradictions as if GERB itself is not full of them. Not to speak of the Bulgarian Socialist Party, which at the moment is probably the most conservative force in the country with its tacit homophobia, anti-immigrant hysteria and politicisation of religion. Against such standards of ideological coherence, DB appears to be one of the few normal pro-European parties in Bulgaria.

There is sufficient intellectual core in terms of ideas and policies, which should preserve the unity of the new player. To name just a few:

DB is a strong proponent of the modernisation of the country by using models from the most advanced democracies;

DB - and its constituent members - have a strong record in campaigning for deep structural reforms addressing the problems of state-capture and corruption. Unfortunately, GERB has proven unsuccessful in these fields. This is demonstrated by its failure to deal adequately with the fallout of the collapse of Corporate Commercial Bank in 2014; the continued collusion between government and specific corporate interests expressed in the concentration of public procurement deals in a handful of firms; media concentration and low-quality journalism of the pro-government media; unaccountability of the prosecutor general; criminal investigations for corruption launched only against members of the opposition and opponents of the government. Against such deeply entrenched problems there is a dire need for an intelligent, non-populist anti-corruption political force.

DB has clear views on the economic non-viability of projects sponsored by the current GERB-led government such as the revival of the construction of a second nuclear power plant in Bulgaria. The Belene project is an extremely costly venture estimated to reach 1/5th of Bulgaria's GDP, which runs the risk of producing expensive and unnecessary electricity in times of a real revolution in power generation technologies.

So far DB has positioned itself as a political force ready to say "No" to: corruption; specific unfortunate appointments of public officials; the second nuclear power plant; the servile behavior vis-à-vis Russia of the current government and the president. Yet, DB still needs to capture the imagination of the public with a positive vision for the development of Bulgaria. For this purpose, it has to boost not only its capacity of constraining the actions of the current government by protests and meaningful criticism, but also its creative powers of providing a positive alternative to it.

Bulgaria is making progress, although it could have been much faster if the already mentioned structural problems had been dealt with. In order to send this message, DB must find a proper balance between justified criticism of the current government, and a compelling vision of a positive alternative to it, which takes on board the achievements but parts with clientelism and state-capture.

In conclusion, Democratic Bulgaria stands a good chance of providing parliamentary representation for a big pool of center-right voters, which have never been attracted or have been alienated by the flamboyant but erratic political style of Boyko Borissov and GERB. More importantly, many see that the country could take better advantage of its membership in the EU and NATO. In order to capitalize on these public attitudes DB needs to do its homework very fast. * Daniel Smilov is a Bulgarian comparative constitutional lawyer and political scientist. He is program director at the Centre for Liberal Strategies, Sofia, recurrent visiting professor of Comparative Constitutional Law at the Central European University, Budapest, and assistant professor of Political Theory at the University of Sofia.

In April 2018 the long-awaited unification of the centre-right extra-parliamentary opposition finally took place. Democrats for Strong Bulgaria (DSB) and Yes, Bulgaria! were joined by the Greens in a new formation called Democratic Bulgaria (DB).