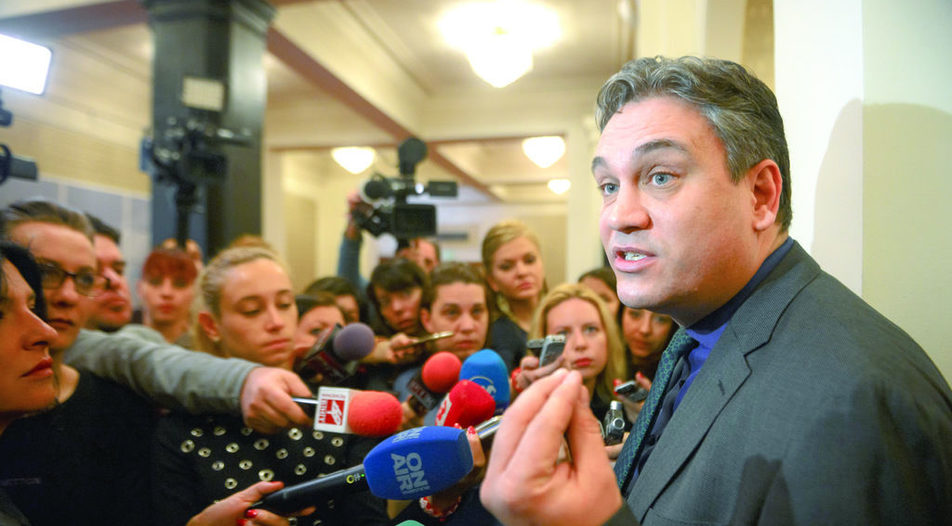 When the fight against corruption starts with corruption

When the fight against corruption starts with corruption

Why is Plamen Georgiev not likely to become "Mr. Clean"?

"Corruption is a really negative phenomenon, but there is a way of fighting it and, very soon, literally within weeks, you may expect new results, very serious ones. People with money will be detained, it will happen soon."

The 43-year old prosecutor Plamen Georgiev made this ambitious statement in the lobby of the parliament in early March, minutes after the assembly elected him chairman of the Commission for Combating Corruption and Forfeiture of Illegally Acquired Property (CCCFIAP), a body set up several months earlier.

It should be the Bulgarian version of Romania's National Anti-Corruption Directorate (DNA), a prosecutor's office specialized in combating high- and medium-level corruption, but this is unlikely to happen:

• Due to the way the new institution was created: without a clear vision, but by mechanically combining a handful of inoperative anti-corruption institutions without analyzing their current effectiveness;

• Due to the operative style demonstrated by CCCFIAP in the first weeks after its creation: a show of force with dubious success;

• Due to the person who was installed as head of this commission by the parliament: a predictable choice forcefully imposed by the government, with a series of questions remaining unasked.

The election of Mr Georgiev, who used to head the predecessor of the new institution over the last few years, the Commission for Forfeiture of Unlawfully Acquired Property (CFUAP), was quite predictable. Plamen Georgiev was a sure winner even before the new institution was established. Not because his professional record is impeccable, but just because he is close to the governing GERB party.

The prosecutor is a part of the closest circle around GERB and made a lightning career after he terminated a criminal investigation against the now late former director of the Customs Agency Vanyo Tanov in 2010. There were recordings of conversations implicating Prime Minister Boyko Borisov in interfering with the customs office, which were destroyed. But they were leaked, and everyone heard the prime minister order Mr Tanov to pull customs officers out of a factory they had been inspecting.

After terminating this investigation, Mr Georgiev became Deputy Chief of the Specialized Prosecutor's Office (established by GERB), and shortly afterwards he joined the executive power as Deputy Minister of Justice in the first government of Mr Borissov (2009-2013). Mr Borissov personally appointed him as director of CFUAP at the end of 2012, several months before the government resigned.

Mr Georgiev has rejected the accusations of being politically bound, saying that the two operations carried out by the anti-corruption commission since the beginning of 2018 were directed against people from different political parties, apparently referring to the mayor of Septemvri Marin Rachev suspected of having awarded public procurement contracts to related companies. The investigation against Mr Rachev, who had been elected on GERB ticket, was the first action of the commission.

At the end of January, masked representatives of the commission (they do not have the right to hide their faces) entered the building of Septemvri municipal government and journalists were summoned on site to take photos of them taking away boxes said to contain evidence. A few weeks later, a court refused to dismiss the mayor of Septemvri, maintaining that the allegations against him were unfounded, because by awarding the said public contracts he had executed a decision of the municipal council.

The hearing of Plamen Georgiev in the parliament prior to his election passed smoothly, with general questions about the will to fight corruption, but without raising any issues that would have worried the candidate.

For example, Mr Georgiev was not asked why in 2015 CFUAP (under his leadership at the time) canceled proceedings against Elizabeth Elena von Messing accused of laundering money for the Russian mafia, thus unblocking over 23 million levs frozen in her accounts. By that time she had already been accused in Bulgaria. Von Messing was finally sentenced to 10 years in prison for money laundering at the end of 2017 but at the beginning of 2018 she absconded from justice.

A week before the election of Mr Georgiev, the Anticorruption Fund (an NGO fighting corruption in Bulgaria) asked the Prosecutor's Office to look into the Von Messing case. After his hearing in the parliament was over, Plamen Georgiev confidently announced that the investigation against him would be suspended because the Prosecutor's Office had found nothing wrong in the cancellation of the proceedings.

No questions were asked about Mr Georgiev's action at the end of last year against the co-founder of media outlets Capital, Dnevnik and KQ Ivo Prokopiev. CFUAP froze Mr Prokopiev's accounts following allegations that 15 years ago he privatized unlawfully a state-owned factory. The freeze is a brazen disregard of the rule of law, not only because the statute of limitations on the alleged crime expired a long time ago. A lawsuit based on exactly the same charges had already been brought to court twice by the Prosecutor's Office. In 2003, the Supreme Court dismissed it. Now, two different courts refused to initiate a criminal case, because the Prosecutor's Office had failed to clearly establish what the alleged crime was. It seems that the only purpose of the Prosecutor's Office investigation was to use CFUAP to freeze Mr Prokopiev's assets.

The first important step Plamen Georgiev has to make in his new capacity is to nominate his deputy and members of the new institution. If these officials get elected in the same way Georgiev was, it will be a bad start for the institution loaded with so many expectations.

"Corruption is a really negative phenomenon, but there is a way of fighting it and, very soon, literally within weeks, you may expect new results, very serious ones. People with money will be detained, it will happen soon."

The 43-year old prosecutor Plamen Georgiev made this ambitious statement in the lobby of the parliament in early March, minutes after the assembly elected him chairman of the Commission for Combating Corruption and Forfeiture of Illegally Acquired Property (CCCFIAP), a body set up several months earlier.