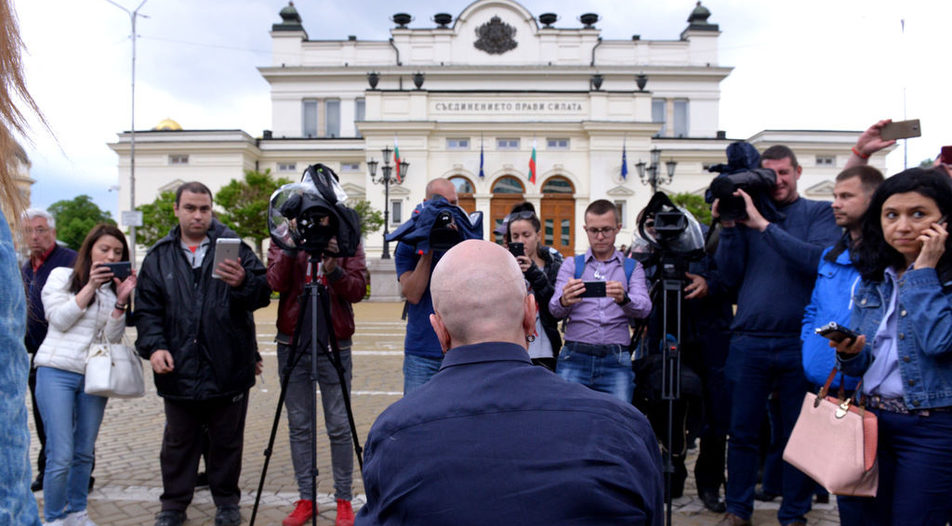 Mr Trifonov has consistently managed to maintain an apolitical image for decades, even though he was close, at different times, with politicians across the spectrum.

What would you do if you think that the entire political class of your country is flawed and is not accountable to the people that voted them in office? If you are the host of one of the longest running talk shows in Bulgaria, known for introducing various dancing and musical formats, you just do a casting for new politicians!

Or at least that is the idea of Slavi Trifonov, the host of the largest Bulgarian national TV station, who used his supposedly comic talk show ("Slavi's Show") for more than a year to promote a complete overhaul of the Bulgarian electoral system and initiated a national referendum on the issue which was held in November 2016. After parliament voted down the non-binding decision of the Bulgarian public to move to majoritarian electoral system, decrease party subsidies and introduce compulsory voting, Mr Trifonov and his team announced that they are launching something of a casting for new, moral and accountable politicians who will abide by the will of the people who vote them in Parliament.

A pop star with a long quasi-political history

"Personally, I am amazed. It turned out that Bulgarian graduates of Yale, Harvard, Cambridge, Bulgarians who have successful business around the world, from all educational, cultural, political, professional and social walks of life within Bulgaria want to partake in such project," wrote Mr Trifonov in a press release in November, claiming that more than 2000 people had send their CVs to apply for his format.

In order to boost the image of his campaign, Mr Trifonov visited the UCL campus in London, where he met over 100 Bulgarian students to the UK. He was hosted by Millennium Club Bulgaria, a youth organization launched by Cambridge University graduate and lawyer Rumen Cholakov two years ago. The organization became known for its advocacy for the unsuccessful bid of UNESCO head Irina Bokova to become UN Secretary General in 2016 and is in the process of opening hubs around Europe and the USA. Without explicitly endorsing any Bulgarian politician or party, the Millenium Club and Mr Cholakov showcase affiliation with Mr Trifonov, supporting his referendum and being frequent guests of his TV show.

Mr Trifonov has consistently managed to maintain an apolitical image for decades, despite of the fact he has been close, at different times, with politicians across the spectrum - from current PM Boyko Borissov, through ex-president Georgi Parvanov and the honorary leader of ethnic-business party Movement for Rights and Freedoms (DPS) Ahmed Dogan to, amusingly, the last leader who tried to bring in young foreign-educated Bulgarians to "fix the country" - Simeon Saxe-Coburg-Gotha, Bulgaria's PM between 2001 and 2005.

A start of a new party

A lot has changed in Slavi Trifonov's image since he announced the casting for politicians. Paradoxically, his show has become much less politicized after the new management of bTV led by Florian Scalla took off air two of its episodes last summer. The reason was that in the past year the only theme that occupied almost the entire show was the referendum, which culminated in threats against Parliament. In his contract with the TV station, Mr Trifonov's company pledges to not spread political messages or support parties, yet the previous, Bulgarian-led management of the bTV, did not impose these rules strictly. Now the show invites prospective political hopefuls but they are introduced rather as social changemakers.

It is not clear when exactly the political version of "The Apprentice" (a game show featuring season-long business like competitions, anchored in US by the US president Donald Trump) will be launched and how the format will go around the contract between Mr Trifonov and bTV. Yet the show has already announced the topics that applicants for politicians will discuss with the editorial team:"The prosperity of the Bulgarian and the prosperity of the nation", "Education - the most important part for the growth of the nation" and "The judiciary - the main problem of the state".

"I don't know if Mr Trifonov will be a populist of the range of Boyko Borissov or Simeon Saxe-Coburg-Gotha, but he can definitely get on the same level of Veselin Mareshki", politologist Parvan Simeonov from Gallup International Balkan told Capital daily. Mr Mareshki's Volya party won 12 of 240 seats in parliament when it made its debut at the polls in March 2017. People close to the Mr Trifionov told Capital that he will probably not pursue direct entry into politics but will prefer to stay on the sidelines, keeping his apolitical image and his successful career as TV host and musician. Besides, maintaining a political party requires enormous resources and it is not clear where the TV host can find them from. Last, but not least, it's easier said than done. As PM Boyko Borissov warned him, "there are 1200-1300 people in GERB who are councilors, regional governors, ministers, vice-ministers, MPs, agency heads, mayors, vice-mayors Is he [Mr Trifonov] going to bring them all from abroad? Where is he going to gather them from? If one of them fails you, you will have to explain yourself for months. It is easy to talk about it."

Advertising
How it all began? In November 2015, Slavi Trifonov and the editorial team of his show announced they will start collecting signatures to initiate a national referendum. Initially, they considered six questions - five concerning the electoral system and one on whether regional police chiefs ought to be selected by means of direct vote (much like in the USA). Following a Constitutional Court decision three of the questions were dropped and when the referendum took place alongside the 2016 presidential elections, there were only three left: should parliament adopt a bill to switch from a proportional electoral system to a majoritarian one that would select members of parliament in two rounds; should state subsidies for political parties be cut from 5.5 euro to 0.5 euro for every vote cast in favor of a party; and should voting become compulsory. All three questions passed with an overwhelming majority of close to 2:1 in the referendum that attracted 3.5 million voters (almost as many voted for President). The presidential elections were followed by the resignation of the second government led by Borissov and by the time the third GERB-led governing majority was formed in April 2017, more than six months after the vote for President, there was little political momentum or social pressure to introduce the changes. After a couple of weeks of protests in front of Parliament building during the summer months that failed to attract much public attention, Mr Trifonov announced his casting for politicians in the autumn.
Mr Trifonov has consistently managed to maintain an apolitical image for decades, even though he was close, at different times, with politicians across the spectrum.

What would you do if you think that the entire political class of your country is flawed and is not accountable to the people that voted them in office? If you are the host of one of the longest running talk shows in Bulgaria, known for introducing various dancing and musical formats, you just do a casting for new politicians!