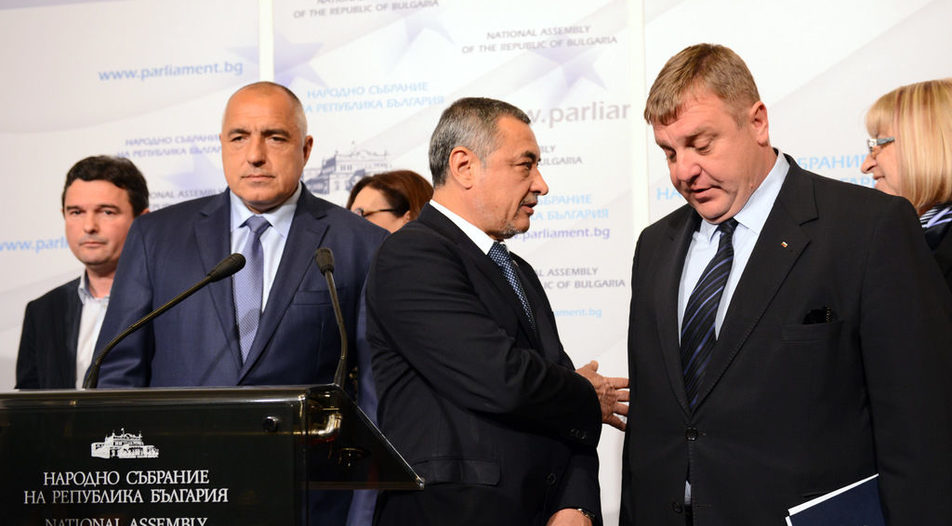 The paradox of Borissov's third government

The paradox of Borissov's third government

Without opposition, yet weak and vulnerable

• The ruling coalition of GERB and the United Patriots will hardly face genuine opposition in parliament.

• The external environment - Eurozone growth and Bulgaria's positive image in Brussels, in comparison with Poland and Hungary - does not pressure the government to pursue reforms.

• The government has failed to dispel by action the public perception of collusion with the judiciary and businesses linked to the Movement for Rights and Freedoms (DPS).

Two things became clear during the summer months: Boyko Borissov's third government practically has no real opposition but despite that it is projecting weakness and vulnerability. Formed in June 2017, the coalition between Borissov's centre-right GERB party and the nationalist alliance United Patriots has stable majority in parliament, yet the mantra of stability conspicuously remains the prime minister's principal topic. This paradoxical situation is due to the mismatch between the favorable environment in which the government operates, and the lack of new ideas in the government combined with continued dependency on murky corporate interests.

Mainly due to positive developments in the Eurozone, the Bulgarian economy is growing at a healthy rate, by around 3.5% year on year when?. The country is falling behind the best performers in Europe such as Romania, but the positive development gives Mr. Borissov a breathing space.

The United Patriots - the national-populists whose presence in the government is somewhat embarrassing in international perspective - have so far been uncharacteristically disciplined and almost politically correct. This is physically straining for their leaders, though, and some of them, Volen Siderov for example, have drastically reduced their public appearances. In contrast, deputy PM Valeri Simeonov has found new niches for his activity, including a rather noisy battle against playing music loud in the Bulgarian Black Sea resorts. This battle - as trivial as it is - has provided considerable media exposure to Mr. Simeonov without the risk of inflicting major damage on the policy or reputation of the government.

Defense Minister Krassimir Karakachanov generally sticks to the patriotic rhetoric of the United Patriots, but if all of his statements are summed up, very few people (if any) will understand what will ultimately happen with the Bulgarian Armed Forces. The acquisition of new combat aircraft has been put on hold: the government has practically canceled the decision of the preceding interim cabinet to buy Sweden's Grippen jet fighters. Talk of acquiring new armored vehicles for the land forces and naval ships continues, but there is no more clarity on these questions either. Mr. Karakachanov also keeps bringing up the issue of reintroduction of military draft, while all other politicians practically reject the idea. All in all, the United Patriots have produced no serious problem during their first months in government but they have not come up with any meaningful solution either.

In European perspective, Mr. Borissov has continued his efforts to demonstrate that he is well received in the major European Union (EU) capitals. Most significantly, French president Emmanuel Macron visited Bulgaria in August and indicated that France may support the country's intention to join the Eurozone. In addition, in his State of the Union speech in September, the President of the European Commission Jean-Claude Juncker expressed support for the potential accession of Bulgaria and Romania to the EU's Schengen borderless area. These are positive and encouraging signs, which give some credence to the government before the Bulgarian presidency of the Council of the EU scheduled to start in 2018.

Finally, parliamentary opposition to the government led by Mr. Borissov is practically non-existent. DPS is nominally in opposition, but actually it is a tacit member of the governing coalition. Most revealing in this regard is the unreserved support given to the government by the media empire of DPS MP Delyan Peevski.

The Bulgarian Socialist Party (BSP) is the main opposition party, which has preserved its relative independence vis-à-vis GERB. The Socialists, however, are struggling to find a topic which is popular and at the same time contradicts the government program. They did try this with issues like the raising of the minimum wage and pensions, and Bulgaria's relationship with Russia. But the problem is that Mr. Borissov is enigmatic on Russia as one can be: the future of major energy projects like the nuclear power plant Belene and the gas hub in Varna is still largely uncertain. Because of that most of the pro-Russian punches the BSP throws against GERB land in the air, as Mr. Borissov is not necessarily hostile to the Russian economic interests in Bulgaria. The situation surrounding the debate on the raising of the income of the population is similar: the government has shown willingness to accommodate certain demands, which has reduced the contrast between Mr. Borissov and the Socialists.

This lack of contrast is further amplified by the de facto overlapping of the positions of the two major parties on issues like the judicial reform and the fight against corruption. As to the latter, the only point of disagreement between them is who should head of the planned anti-corruption agency. Understandably, the Socialists want president Roumen Radev (elected with their support) to appoint the head of the new body. They also insist on granting investigative powers to the agency, which may turn it into a strong instrument against the GERB government. Also, quite understandably, GERB reject these ideas (see more on p. 11).

Extra-parliamentary opposition parties - mostly Yes, Bulgaria and Democrats for Strong Bulgaria (DSB) - remain in crisis and do not exert any significant pressure on the government. Therefore, it is justified to conclude that the cabinet is operating practically without opposition.

A major source of weakness for the government is its inability to inspire substantial confidence at home and particularly abroad. In an environment, in which it appears dominant, the model of Borissov's governance is demonstrating its intrinsic limitations. The symptoms are the following:

First, Bulgaria, in contrast to Romania, cannot attract major foreign investment. This means that investors have no confidence in the rule of law and the protection of their rights. The failure to catch up with Romania economically becomes ever more conspicuous.

Second, although the government and Mr. Borissov are fairly popular, their levels of approval cannot be seen as a guarantee of lasting stability. President Rumen Radev became the most popular politician in 2017 and remains so, which automatically creates a possibility for future political competition. And all in all, the political space remains highly fragmented and volatile. Many consider themselves not represented in parliament, or take their vote simply as a sign of protest against the political system. Much of the popularity of the United Patriots and Volya (sole proprietorship of Vesselin Mareshki, a pharmacy mogul) is a result of such protest vote, which does not translate into politically stable trust and party affiliation. What is more, new populist players, as the talk-show host Slavi Trifonov, have announced intentions to enter politics, which could result in further fragmentation of public support. In such circumstances majorities become elusive, temporary and fragile.

Third, despite positive signals from Paris and Brussels, Mr. Borissov does not enjoy the full trust of European leaders. Germany and the Netherlands have expressed immediate reservations on Bulgaria's bid to accede to the EU's Schengen agreement, while the European Central Bank has not made any practical moves to invite Bulgaria to join the ERM II (see more on p. 24) and such an invitation still remains problematic. The main obstacle is the EU's lack of trust in the claims of the government it is making genuine efforts in the fight against corruption and the reform of the judiciary. No one seems to be fooled any longer by the string of institutional and legislative changes labeled as anti-corruption measures.

The point of any institutional change intended to fight corruption is to make government less dependent on entrenched economic and other vested interests. After December 2015 the goal of institutional reforms in Bulgaria is the opposite: to make these vested interests even more powerful and uncontrollable. The lack of accountability of the Prosecutor's Office has become notorious. The election of new top magistrates such as the head of the Supreme Administrative Court, and new members of the Supreme Judicial Council have only confirmed the suspicions that the interests, which have captured the judicial system, are still untouchable.

Fourth, the collusion between the government and specific economic interests linked to DPS becomes more and more visible. The latest example in this regard is a scandal concerning ammunition manufacturer Dunarit (see more on p. 76). Many believe that this company is being raided with the help of public authorities in order to benefit the DPS MP Delyan Peevski. Even if these allegations prove unfounded, they have already eroded the public standing of the government. Many also perceive as biased and unfair the investigation of the collapse of Corpbank in 2014 and the steps of the prosecution that followed. The main accused figure, Corpbank's former owner and now fugitive banker Tsvetan Vassilev, appears to have been instrumental to the bank's siphoning off. But in the meantime his former business partner Delyan Peevski, who for many is also linked to the collapse of the bank, is enjoying question-free legalization of enormous assets (until very recently Mr. Peevski officially had no business and only owned a second-hand car and a small flat in one Sofia's shabby neighborhoods).

Regardless of the outcome of these proceedings, they do strengthen the public perceptions of collusion between the government, the judiciary and DPS-linked businesses.

All these weaknesses and vulnerabilities spell a tense and nervous period ahead, in which scandals involving the government are highly likely. It is true that by having a favorable press coverage, Mr. Borissov will exercise strong damage control. But some of the scandals have acquired international dimensions, which may complicate matters for him.

For the time being, the delicate balancing act between the rule of law and the protection of vested interests continues in Bulgaria.

• The ruling coalition of GERB and the United Patriots will hardly face genuine opposition in parliament.

• The external environment - Eurozone growth and Bulgaria's positive image in Brussels, in comparison with Poland and Hungary - does not pressure the government to pursue reforms.

• The government has failed to dispel by action the public perception of collusion with the judiciary and businesses linked to the Movement for Rights and Freedoms (DPS).

Two things became clear during the summer months: Boyko Borissov's third government practically has no real opposition but despite that it is projecting weakness and vulnerability. Formed in June 2017, the coalition between Borissov's centre-right GERB party and the nationalist alliance United Patriots has stable majority in parliament, yet the mantra of stability conspicuously remains the prime minister's principal topic. This paradoxical situation is due to the mismatch between the favorable environment in which the government operates, and the lack of new ideas in the government combined with continued dependency on murky corporate interests.