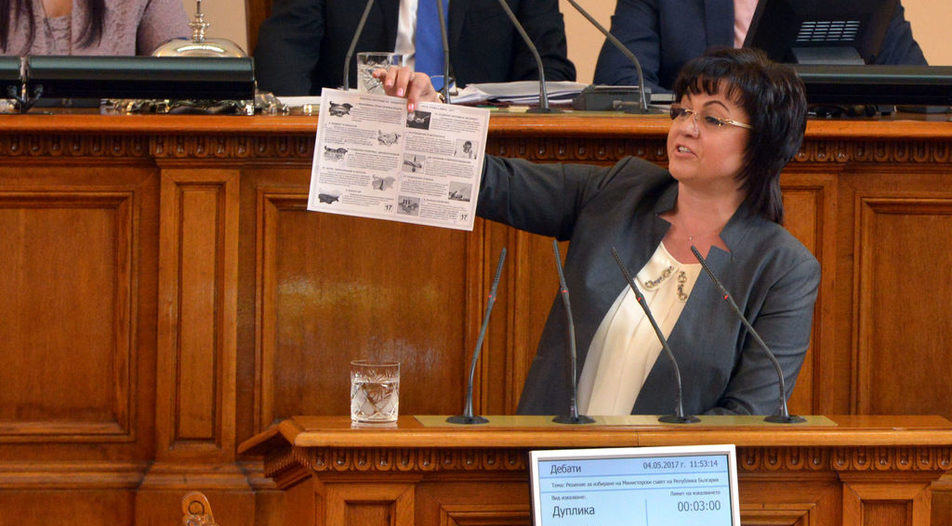 One of the biggest problems of Bulgarian politics is the absence of effective opposition in parliament. It is not a consequence of the Bulgarian institutional set-up, rather a by-product of the "winner-takes-all" political mentality.

The new parliament formed after the snap vote in March will inevitably be inhabited by weak opposition like its predecesors, which opens the door to excessive government.

For a start, the Bulgarian Socialist Party (BSP), the main opposition force in the new parliament, is now led by Kornelia Ninova, an active, although a bit hectic politician famous for her stinging attacks against Prime Minister Boyko Borissov. She urged a complete revamp of the BSP apparatus long plagued by business interests of politicians like Georgi Gergov, a businessman who barely hides his personal ties to Mr. Borissov. Ms Ninova wants to bring back the Socialist Party close to the people and this might turn out to be the glass ceiling above its usefulness as a parliamentary opposition.

In the first weeks of the new National Assembly the BSP reintroduced for yet another time controversial populist pieces of draft legislation, instead of hitting against corruption cases suspectedly related to the governing GERB party. The BSP wants to change food legislation in a way that will oblige supermarkets to sell a fixed percentage of food products made in Bulgaria and wants to abolish state funding for private schools (which is miniscule).

Yet, there are good signs that the BSP leader might emancipate herself further from Mr. Borissov's subversive influence - Mrs. Ninova refused his invitation to become Parliament Speaker and her lieutenant Kiril Dobrev proposed to form an ad-hoc parliamentary committee to look into suspected irregularities in awarding contracts for the construction of highways during the terms of office of the previous GERB governments. If more efforts are put in expert-driven, feasible actions like the latter one, BSP might grow into a much more useful opposition than they were in the previous parliament. The higher number of Socialist MPs will also help. BSP controls 80 of the 240 seats in the new parliament, compared to 39 in the previous one.

Another problem for GERB in this parliament will be the relationship with their junior government coalition partner - the United Patriots (UP) nationalist alliance, particularly vis-a-vis a controversial change of the electoral code. In a national referendum held last year, a vast majority of voters supported a proposal to change Bulgaria's proportional electoral system into a majoritarian one. The UP vehemently opposed the change but GERB pushed it through the legal affairs committee in parliament with support from the Movement for Rights and Freedoms (MRF) who will also gain from majoritarian voting. There is a huge chance for the legislation to pass, which may easily anger the nationalists.

There is also Volya ("Will") party of pharma and petrol businessman Veselin Mareshki, which has already shown its support for GERB. Mr. Mareshki may well turn out to be a useful partner of GERB when the United Patriots come at odds with the leading party in the government coalition. Mr. Borissov may trade Mr. Mareshki's support for GERB for key positions in Bulgaria's medicines agency and the competition regulator, which could turn a blind eye to some of his business practices.

Finally comes GERB's relationship with the MRF. Up until now the party has won more than enough concessions from GERB (see the appointments article) and remains in the comfortable position of a power broker who can support or block key legislation, depending on what it gets from Mr. Borissov. The crucial question for Mr. Borissov is how long he would sustain balancing between the interests of his quasi-allies and the attacks of BSP, while simultaneously trying to assure his EU partners of the progress Bulgaria is making in key areas.

One of the biggest problems of Bulgarian politics is the absence of effective opposition in parliament. It is not a consequence of the Bulgarian institutional set-up, rather a by-product of the "winner-takes-all" political mentality.

The new parliament formed after the snap vote in March will inevitably be inhabited by weak opposition like its predecesors, which opens the door to excessive government.