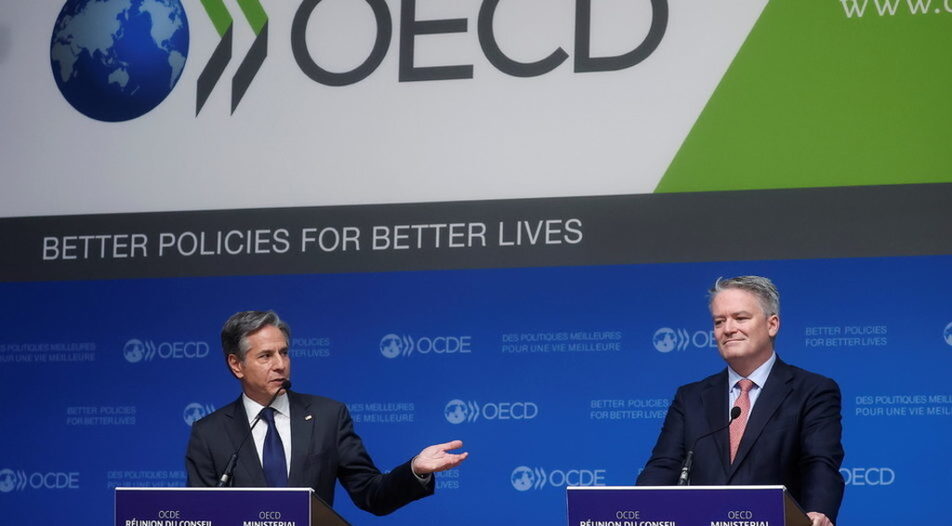 In the last decades Bulgaria has joined various strategic intergovernmental organisations thanks to someone else's bigger political plans. A new example could be the country's possible admission to the Organization for Economic Co-operation and Development (OECD).

It all started with an article by Reuters which says that the organization's new secretary-general, Australian politician Mathias Cormann, has proposed including six candidates for entry in a simultaneous accession process: three Latin American aspirants ‒ Brazil, Argentina and Peru, and three Eastern European candidates ‒ Romania, Bulgaria and Croatia. The idea is to dilute resistance to any particular country joining, according to a Reuters' source.

Meanwhile, the annual meeting of OECD ministerial council in Paris began and Bulgaria was invited to participate with its delegation. After the meetings caretaker deputy prime minister Atanas Pekanov hinted that the country is taking an important step towards membership.

According to sources of Capital close to the caretaker cabinet, for the first time Bulgaria has a real chance to receive an invitation for this club of developed economies. The country's aim for now should be to take advantage of the moment and to do its homework. This involves a lot of technical reviews by the OECD and different legal reforms, policies and practices in line with the organization's standards.

Bulgaria submitted a formal application for OECD membership in 2007. In 2019, the country adopted a national action plan, which was approved by the organisation. Subsequently, Bulgaria joined different legal instruments of the organization in key areas, and an economic review of Bulgaria was prepared. However, when the document was presented in January 2020, it became clear that there was no consensus on the country's full accession.

Bulgaria received many recommendations that said incomes can grow faster, but this requires ambitious reforms; also more efforts are needed to protect the independence of the judiciary, and the skills of workers must improve. Also it was noted that there are large income inequalities. Part of these recommendations cannot be fulfilled in just a few months, but others are easily reachable with political support - judicial reform, for example.

A few months before the OECD stopped short of inviting Bulgaria to join, a government delegation led by then Prime Minister Boyko Borissov visited the United States and met with President Donald Trump. According to sources close to Borissov's office, Bulgaria was denied membership in the OECD back then.

After U.S. President Joe Biden's administration assumed office at the beginning of 2021, Bulgaria's caretaker cabinet that took office in May continued the efforts in this direction and ordered a new economic review. It also adopted a roadmap with the aim to deepen the cooperation with the OECD in all areas.

According to sources close to the caretaker cabinet Bulgaria has received optimistic signals after the meeting in Paris. Now the expectations are that Bulgaria will be invited for membership negotiations, probably together with the other five countries mentioned by Reuters. This would be a great foreign policy success for the caretaker government. It is important to note that two of the key ministers in this cabinet - Kiril Petkov and Assen Vassilev, founded a new political formation which won the snap parliamentary elections on 14 November. Now the new party - We Continue the Change, has launched consultations with other parties to form the next government.

Why it is important

The OECD is a prestigious international organization, established in 1961, which has the most developed countries in the world as members, and it is no coincidence that many candidates usually wait for years to join it.

Bulgaria's membership in this "club of mostly rich countries" would increase the confidence of investors in the country, as the organization is a forum of the most developed market economies in the world. Also, the OECD itself collects and analyzes critical data for the economic development of its members. That would be useful to Bulgaria when it comes to carrying out meaningful reforms in different areas. Full membership will allow Bulgaria to participate in the process of making decisions on important global issues.

The last country that joined OECD was Costa Rica which officially concluded its accession process in May 2021 after five years during which it underwent in-depth technical reviews and introduced major reforms to align its legislation, policies and practices to OECD standards. These spanned a wide range of policy areas and included a comprehensive reform of competition policy and enforcement, a redesign of the national statistics system, the introduction of criminal liability of legal persons for foreign bribery and the establishment of a register of shareholders to ensure tax transparency.

If we draw a parallel with Costa Rica, Bulgaria has already passed several technical inspections, implemented and approved by the OECD action plan, as well as a three-year roadmap for accession. Bulgaria's EU membership also helps, as many of the union's requirements and standards overlap with those of the OECD. Still, according to people familiar with what has been achieved under Bulgaria's plan so far, the country still has a lot of work to do before becoming a full member of the club. But as the case was with Bulgaria's membership in NATO, the EU and the Exchange Rate Mechanism, the main factor for getting a positive answer probably has to be sought outside the country. This should also be a policy enacted by the new government: it will have to grab the chance and do what it has to

In the last decades Bulgaria has joined various strategic intergovernmental organisations thanks to someone else's bigger political plans. A new example could be the country's possible admission to the Organization for Economic Co-operation and Development (OECD).