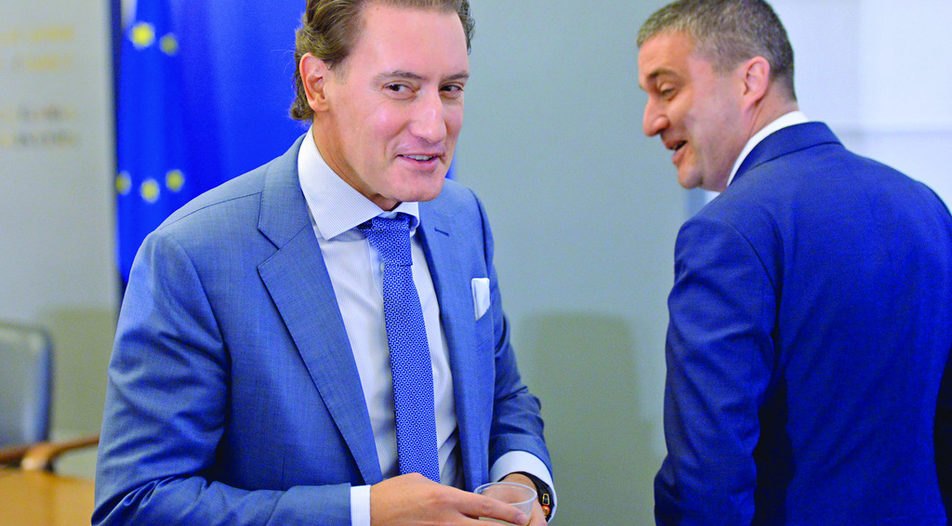 After months of jockeying, Nova TV finally has a buyer the Bulgarian authorities can tacitly approve of. Local businessman Kiril Domuschiev signed a contract to buy the biggest media group in Bulgaria from Sweden-based MTG. The owner of Bulgaria's Huvepharma and FC Ludogorets offered the same price as Czech businessman Petr Kellner who had offered 185 million euro for Nova Broadcasting Group last year. The only difference is that Mr Domuschiev, who is chummy with the Bulgarian political elite, won't face any obstructions from the authorities.

Closing the deal will add a new, much stronger weapon to the propaganda arsenal of the ruling GERB party. Data from Nielsen Atmosphere Bulgaria shows that Nova TV reaches 42% of the audience.

The deal will be financed by four banks - Unicredit Bulbank, DSK Bank, UBB and BNP Paribas Fortis, the Belgian division of French banking group BNP Paribas. They will extend a syndicated loan of 100 million euro and Domuschiev's Advance Media Group will provide the remaining 85 million euro.

According to Capital newspaper, Domuschiev has also offered a "regulatory risk" guarantee of one million euro to ensure that this time the deal for Nova TV will be approved by the Commission for Protection of Competition (CPC). MTG said in a press release it expects clearance to be issued in the second quarter of 2019.

Whomever the government likes

The deal takes place in a crucial year, which will see three key votes taking place. The European Parliament elections in May will be pivotal to the survival of the governing coalition. Around that time, the authorities will start procedures to select a new prosecutor-general - an integral figure for the smooth functioning and impunity of Bulgaria's political class. Then, in the autumn, local elections will be held, important for maintaining the electoral and economic influence of GERB.

The government's decision to choose Mr Domuschiev to buy the biggest media group in the country was revealed in July 2018. At that time, a binding offer for Nova TV submitted by Czech businessman's PPF investment fund was on the table. Three sources from Capital newspaper confirmed that Kellner had received a message sent through two intermediaries - a Bulgarian one and a Czech one, saying that the Bulgarian government recommended that a Bulgarian partner be included in the Nova TV deal. That partner was Kiril Domuschiev. A meeting between the two businessmen was arranged in the middle of July but Kellner refused to partner with Domuschiev.

Several days after the rebuff, the CPC blocked the acquisition of Nova TV with an unprecedented ruling. The regulator, which had never before rejected such a deal, justified its decision by citing Nova TV's large market share. According to the regulator's absurd logic, Mr Kellner's access to considerable financial resources could have strengthened the media group's market grip. By applying the same criteria, however, every company in robust financial health should have been barred from taking over Nova TV. In other words - CPC quickly and effectively forbade any acquisition of the media group that did not have the government's blessing.

The deal was unblocked in January 2019 when MTG started negotiations with the "blessed" candidate Kiril Domuschiev.

Swedish ethics is for Sweden

MTG's decision to quickly seek negotiations with a new buyer - whatever their identity, is understandable. Over the past three years the international digital entertainment group has overhauled its strategy, transforming itself from a content broadcaster into a content producer. It has sold all its TV channels, save for Nova TV. Obviously, the group was so desperate to leave the Bulgarian market that it resigned itself to the need to do so at a huge loss. MTG bought Nova TV in 2008 for 620 million euro - an improbable price from today's perspective.

A hallmark of Scandinavian business culture is the belief that successful companies and their employees are responsible not only for themselves, but also for the whole market and wider society. When another Swedish media group, Bonnier, was leaving Bulgaria in 2011, it chose to sell its local newspaper Pari to Economedia (the publisher of KQ, Capital and Dnevnik) for a nominal sum. The alternative was to accept an offer from the group around Delyan Peevski, a Bulgarian MP and media mogul, who was aiming to monopolize the print media market. Bonnier preferred to swallow a loss rather than contribute to harmful media concentration.

Even if a year ago MTG had such a choice, after the CPC decision it no longer has. Business ethics is all very well but no company can easily write off 185 million euro.

Besides, MTG has already demonstrated a convenient lack of scruples. In the Czech Republic, the company operated in partnership with controversial billionaire Ivan Zach connected to Czech president Milos Zeman. When MTG left the country, it sold its shares in TV Prima, known for its favorable coverage of Zeman, to Mr Zach.

In Russia, MTG was forced to leave the market when President Vladimir Putin declared war on foreign ownership of local media. The company sold its business to pro-Kremlin oligarch Alisher Usmanov. It seems that, for MTG, Scandinavian business ethics apply only on home turf, while in Eastern Europe the company plays by the local rules.

The right man for the job

Kiril Domuschiev would be a good fit for the company of Ivan Zach and Alisher Usmanov. He owns numerous businesses in Bulgaria - the pharmaceutical company Huvepharma, the former state-owned shipping company Navigation Maritime Bulgaria and the Port of Burgas, as well as many property projects - with a total turnover of more than 1.2 billion levs in 2017. Despite his diversified business, he is still vulnerable to state censure if he defies the powers-that-be. In addition, Mr Domuschiev heads KRIB, the largest employers' association In Bulgaria, which acts more and more as a pro-government structure.

The close relations between Mr Domuschiev and the government were on full display in July 2018 when the parliament passed an amendment to the Privatization Law that would have saved the businessman over 50 million levs in penalties for breaking the privatization contract for Navigation Maritime Bulgaria. The amendment was adopted with the votes of MPs from the ruling GERB party, Ataka and VMRO (partners of GERB in the government coalition) and the Movement for Rights and Freedoms (nominally in opposition). This was clear evidence that Mr Domuschiev enjoys political patronage at the highest possible level. After a scandal, and a veto by President Rumen Radev, the amendment was revoked but the episode demonstrated the warm ties between Mr Domuschiev and those in power.

Mr Domuschiev heads KRIB, the biggest employers' association In Bulgaria, that acts more and more as a quasi-government structure.

To date, the businessman hasn't demonstrated direct involvement in the media sector. However, he controls the Economy magazine and economic.bg website has sponsored the Standard newspaper over the years and is also known to control a certain share in the yellow website blitz.bg. But now, with ownership of Nova TV, he will become an influential media magnate.

In fact, MTG is already taking actions to tame Nova TV and turn it into a toothless media. Since 2017, several prominent journalists and a couple of TV programs critical of those in power have been removed. The last significant journalistic investigation of Nova TV (one touching on government corruption) was also in 2017. But it seems this is insufficient and the government needs full control over the TV station.

Who wants to own a TV station?

The future of the TV business (and any other business relying on advertising) is unclear at best. MTG is probably leaving the TV market because it is no longer that profitable. Foreign companies are trying to exit while they still can get a decent price for their assets. In this case, the high price - 185 million euro for a company with an operating profit of 20 million euro in 2017, is proof of the high political value of Nova TV.

After adding this TV station to its media machine, GERB can rest more easily, knowing that the coverage of the most important events in Bulgaria this year - the vote for European Parliament, the selection of the next prosecutor general and the local elections - will doubtless reflect better the views of the government.

After months of jockeying, Nova TV finally has a buyer the Bulgarian authorities can tacitly approve of. Local businessman Kiril Domuschiev signed a contract to buy the biggest media group in Bulgaria from Sweden-based MTG. The owner of Bulgaria's Huvepharma and FC Ludogorets offered the same price as Czech businessman Petr Kellner who had offered 185 million euro for Nova Broadcasting Group last year. The only difference is that Mr Domuschiev, who is chummy with the Bulgarian political elite, won't face any obstructions from the authorities.

Closing the deal will add a new, much stronger weapon to the propaganda arsenal of the ruling GERB party. Data from Nielsen Atmosphere Bulgaria shows that Nova TV reaches 42% of the audience.