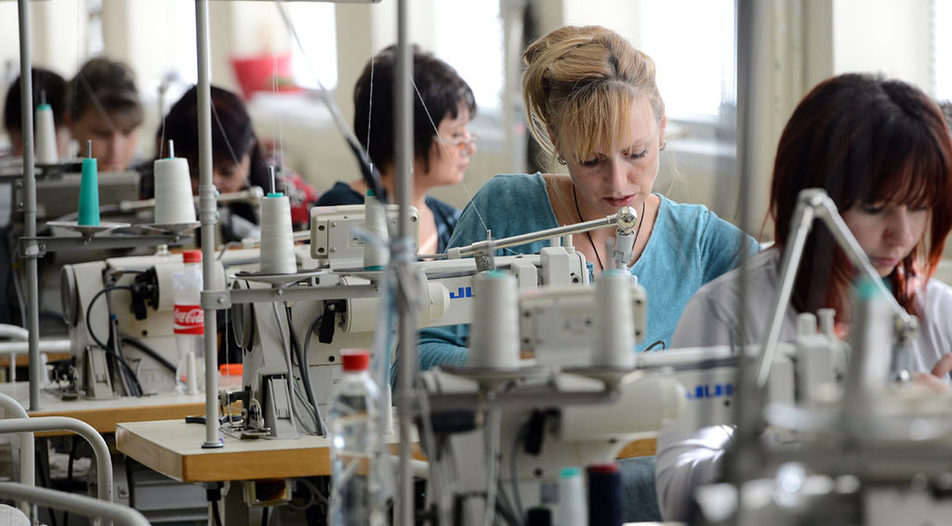 Textile and Apparel: Shortage of Hands amidst Plentiful Orders

Textile and Apparel: Shortage of Hands amidst Plentiful Orders

The revenues of the largest companies in the sector grew by 7%. Exports from the sector rose at the same rate to 3.86 billion levs with 30% generated by the top 20 firms.

• The apparel companies enter new niche markets like the auto industry and biotextiles.

• Due to the lack of workers some companies expand to new places in Bulgaria or even abroad.

The combined revenues of the top 20 companies for textile and apparel increased by 7%, reaching almost 1.2 billion levs in 2016. Therefore, last year seems to have been more successful compared to the previous one. Six of the companies in the sectoral ranking of Capital newspaper reported a decline of sales but only one reported a loss at the end of 2016 and three posted lower profits compared to 2015.

Overall, the sector performed strongly in 2016. According to figures of the National Statistical Institute, exports of textile and textile items exceeded 868.7 million levs, up 6.9% on 2015. Exports from the bigger group of apparel and apparel accessories also followed an upward trend. It exceeded 2.996 billion levs, up 7% year-on-year.

The company of Edoardo Miroglio, an Italian entrepreneur holding a Bulgarian passport, is a leader in the branch for yet another year in a row. Miroglio owns textile factories in Sliven, Yambol and Svishtov. E. Miroglio reported an 8% growth of revenues in 2016. The company attributes the growth to last year's investment of over 35 million levs in the upgrade of its machine fleet, the building of a big warehouse base and extension of the ready-to-wear and knitwear plant in Sliven. Last year E. Miroglio launched a new product - stamped fabrics.

In March this year Edoardo Miroglio opened a production workshop in Kotel which will manufacture ready-to-wear clothes of famous trademarks.

The producer of worsted yarns (made from long-staple wool), Safil, ranks again second in the sectoral ranking and reports revenue growth, albeit a small one. In October 2015 the company changed ownership after Italian parent Safil sold its business to the German-based Südwolle. "Markets have increased and we have many internal sales within the group, which includes plants in Germany, Poland, Romania and China," manager Georgi Peev commented. He noted that the company keeps its current production volumes on hold due to difficulties in finding staff which is a common problem for the whole sector.

Bulgaria's Kalinel, one of the oldest and biggest local suppliers of IKEA, ranks third. The Troyan-based company is one of the two main producers of household textiles for the stores of the Swedish concern across the world. The company has factories in Troyan and Cherven Bryag as well as in Serbia.

"In 2016 we invested 8.7 million levs in machines, a warehouse, a 2,200 sq m production workshop and an administrative building in Cherven Bryag. The investment in Serbia was a small one, of 200,000 levs, but this year we plan to invest a further 1.3 million levs," said the owner of Kalinel, Marin Radevski. The company intends to invest 5.4 million levs in Bulgaria in 2017.

The other Italian investors

The top 20 list features four more companies with Italian owners. The Gabrovo-based Zalli (4th position) reports a slight increase of revenues to 98 million levs in 2016 and an increase of profits. The partners in the company are Calzedonia based in Malcesine (Verona), Italy, with 99%, and Calzedonia Finanziaria based in Luxembourg. The company produces ladies' and men's underwear, T-shirts, blouses and tights of the Intimissimi, Tezenis and Calzedonia trademarks.

Another Italian investment is the Nova Zagora-based Sinterama Bulgaria (8th position), a part of the Sinterama Group. The company produces textile fibres and exports almost 99% of its output. Sinterama Bulgaria has been operational since 2012. Last year the company reported a 38% growth of revenues compared to 2015 and attributes the increase to its latest item - yarn for the automobile industry.

Duvetica Bulgaria (19th) located in Dimitrovgrad is a part of Italy's Duvetica Industrie which has been present in the country since June 2008. The company manufactures jackets and down-filled clothes. The company reported a decline of revenues for yeat another year in a row which is explained with reduced demand on the world markets. According to Dimitar Ivanov, an administrator at the company's logistics centre, the company had a good start in 2017 as the market has begun to recover. "The main logistics centre of the parent company, Duvetica Industrie, is in Bulgaria and this is a recognition of our efforts," Ivanov stressed.

One more company is also an Italian investment, Balkonf - Targovishte (10th). It was set up in 1991 by Antonio Raniki under the name of GTK. The company has two production facilites - in Turgovishte (for men's shirts and ladies' blouses) and in Balchik (for men's coats, suits and trousers). It also has four stores located in each of the towns where its factories are based, in Sofia and Varna. The company is the only one of the top 20 which reports a loss albeit a minor one.

Balkantex - Sofia (6th) also has a foreign owner, Cross Fashion of Switzerland. The company works with contractors and provides them with a designer team, industrial designers, developing of cuts and a network of over 100 subcontractor-factories. In 2016, the company grew its revenues and swung to profit after reporting a loss in 2015 due to the bankruptcy of a German customer. Nevena Hadzhieva, head of Corporate Social Responsibility and Quality Management Systems, said that the company's most recent focus is on apparel made of 100% bio fabrics or recycled materials.

The Turkish company Emboy Yuntas Tekstil, Izer Lodrik and Vedat Lodrik are shareholders in Embul Investment - Stara Zagora (11th). Established in 2000, Embul Investment manufactures synthetic and acrylic yarns. Over 90% of its output is exported, mostly to the EU, where it is used to manufacture fabrics for clothes, car and furniture upholstery, etc. The company reports the highest increase of revenues (108.61%) among the top 20.

The only manufacturer of woven carpets in Bulgaria, Rogee Vaden Berghe BG - Sliven (12th), has Belgian owners. This is the former Decotex factory acquired by the Belgians in 2011. In the first two years after the change of ownership the company made woollen carpets but the pressure on prices rendered this business unprofitable and shifted the focus to polypropylene carpets. The company invested 2 million euro in upgrading last year which allows to resume the production of woollen carpets using a new more efficient technology. The Belgian owners have invested more than 12 million euro in equipment and upgrading of the building stock since the acquisition. The company reports a 18.2% growth of revenues in 2016 year-on-year.

Half of the companies in the sectoral ranking of apparel and textile firms have Bulgarian owners. The Burgas-seated Kush Moda (holding the 5th place again) of partners Fatme Ali Kush and Hasan Jan boosted its proceeds from sales by almost 10% last year compared to 2015.

"This is a result of increased orders placed by H&M for which 98.5% of our output is destined," Chief Accountant Galin Dobrev explained. "The plans for 2017 include further investments into modernization and upgrading of buildings and infrastructure."

The Burgas-based Yana (7th) reports a slight decline of revenues, of around 2% and also a slight profit growth in 2016. Yana manufactures cotton and polyester yarn for the needs of its other two production units - Yana Pleven (towel articles) and Yana Panagyurishte (knitted textile). Industrial Leasing and Hersey are shareholders in the company.

The partners in GMT - Sofia (9th) are Georgi Vanchev, Mirena Raicheva and Teodora Tsenkova. The company has shares in Creazioni Donna (manufacturer of ready-to-wear ladies' clothing, Andre Sato Bulgaria (production of and trade in underwear), AMS - BG (imports of textile, articles and machines), and Poly Trans (transport). GMT fulfils orders for ladies' and men's ready-to-wear clothing with materials supplied by the customer, using the services of around 70 subcontractors. Italy is its main market. Besides, the company imports machines for the tailoring industry.

"In 2016 we increased the share of our own production to 80%," Teodora Tsenkova commented. As she put it, the shortage of workers in the sector is striking. "The companies cope with the smaller orders but when a higher number of items is assigned, you feel at a loss because there is no one to fulfil them," she said.

At the end of 2015 the Pleven-based Dimitrov company (13th place) owned by Magdalen Dimitrov built a new factory, in which it invested 25 million levs. The company produces men's suits, coats, trousers and overcoats for Ermenegildo Zegna, Boss, Armani, etc. It sells clothes under its own trademark Desizo Monni in stores of the company. Obviously, the potential of the new factory yields results as the company reports a 20.5% growth of revenues in 2016 and an almost four times higher profit compared to 2015.

Among the lower-ranking companies, it is interesting to note the development of Aglika Trade (20th). Apart from planning to invest 4 million levs in one more new production plant in Tvarditsa it has already bought and equipped two production facilities in Moldova - in the town of the same name as the Bulgarian Tvarditsa and in Taraclia.

• The apparel companies enter new niche markets like the auto industry and biotextiles.

• Due to the lack of workers some companies expand to new places in Bulgaria or even abroad.

The combined revenues of the top 20 companies for textile and apparel increased by 7%, reaching almost 1.2 billion levs in 2016. Therefore, last year seems to have been more successful compared to the previous one. Six of the companies in the sectoral ranking of Capital newspaper reported a decline of sales but only one reported a loss at the end of 2016 and three posted lower profits compared to 2015.