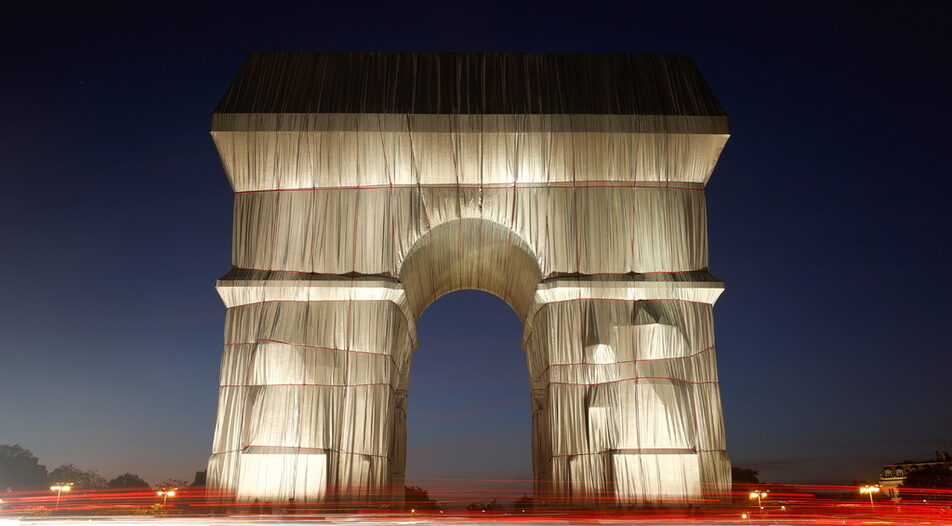 "L’Arc de Triomphe, Wrapped", the posthumous work of the Bulgarian-born contemporary artist, is connected in more than one way to his country of origin

How the year fared for local literature, cinema and contemporary art

"L’Arc de Triomphe, Wrapped", the posthumous work of the Bulgarian-born contemporary artist, is connected in more than one way to his country of origin

Amid the continuous cycle of repeat elections and the raging health crisis, 2021 looked brighter for Bulgaria if we focus on the cultural scene. New spaces opened, exhibitions were so numerous it was hard to keep pace with them and after a slightly muted 2020, and local literature was replete with memorable novels.

Here we take a look at several of the cultural highlights in 2021.

A good year for Bulgarian literature

Bulgarian literature has always been underrepresented on the international book market. There has, however, been some silver lining in terms of recognition.

In October, Georgi Gospodinov's most recent novel, last year's Времеубежище (translated as Timeshelter in the forthcoming English translation), received Premio Stregga Europeo, the most prestigious literature award in Italy. Translated by Giuseppe Dell'Agata, in Italy the novel has been published under the title Cronorifugio.

In this 2020 interview Gospodinov outlined the novel's main topics: "That initial moment, when a now well-known story became news for the first time, is especially interesting to me. When did things start to change? Why does everything seem sudden and unexpected to us time after time?"

2022 will start with the publication of "Arrival" by Nataliya Deleva, which has been slowly but steadily carving out its path on the literature scene. The novel, expected in bookshops on February 24, is described by publishers The Indigo Press as an exploration of the ripple effects of domestic abuse on children. Poet Katerina Stoykova sees it as "a story of growth and healing, an unflinching look at the aftermath of growing up amidst systemic domestic violence".

"What bothers me in literary discourse in Bulgaria today is the constant competition," says London-based author Nataliya Deleva in a recent in-depth piece of ours which detailed the creative challenges behind three new novels, written by Bulgarian female writers all living abroad. "Literature exists to enrich, offer perspectives, and satisfy different readers' tastes. It's not a competition."

It wasn't all just about Maria Bakalova's Oscar nomination for Sasha Baron Cohen's "Borat 2". Bakalova was also pivotal to the success of Bulgarian drama Women Do Cry, which premiered in Cannes to positive reviews and took cinemas by storm in the autumn. Our longtime film critic Yanko Terziev described the movie as "an explosive mixture of talent and border-breaking bare honesty".

Kamen Kalev, one of Bulgaria's most internationally recognized directors, made a comeback with the slow burner "February", also a Cannes-selected title, shot on film and inspired by the life of his grandfather. "For me it was important to express a certain continuity in order to show we can escape from our fate," Kalev told us earlier this year.

However, there was one clear box office winner in 2021: Victor Bozhinov's comedy "The Naked Truth About the Zhiguli Band" which tells the story of aging musicians deciding to stage a reunion of their once famous rock band.

The most widely seen documentary is "Life after Life" by Stephan Komandarev, one of Bulgaria's most prolific and successful filmmakers. The movie focuses on the low rates of transplantations in Bulgaria. The process is now even more complicated with the COVID crisis gripping hospitals and challenging the slow administrative processes.

"There is an incredible division in Bulgarian society," said Komandarev in a recent Q&A. "Understandably, this division takes place in a poor society torn by huge social inequalities. There's a yawning schism between the super-rich who are petted by political circles and those who live on the margins. This is reflected in the state of education, on trust, on the feeling that an equal start is possible. When a society is socially divided, a person loses trust in his/her neighbor and colleagues and institutions."

2021 also brought sudden posthumous recognition of one of Bulgaria's leading XX century directors and one of the first renowned female directors of the 1950's - Binka Zhelyazkova (1923-2011). Several of her movies were shown at the 62nd Thessaloniki International Film Festival.

"What I think a lot about these days is how young people define themselves today," said to Capital.bg in a wide-ranging conversation German director Burhan Qurbani, creator of "Berlin Alexanderplatz", the highly modernized new take on Alfred Döblin's classic novel. Qurbani was also a guest of Cinelibri Film Festival, an annual event which screens movies adapted from novels or stories, and member of this year's international jury. "For example, I see many hip-looking people on the streets of Sofia. But is there a reformed thinking behind their appearance, or are they being influenced by older worldviews and simply imitating some counter-cultural appearance? If there is a need for change, people today must initiate it. Our mission is to make politics sexy again."

Other guests pondered on the topics of radicalization and communication. "The art of conversation, in which you find different solutions to different problems and face different ways of thinking, seems to disappear at the expense of giving labels to everything. In this process I see a certain loss of empathy, a loss of ability to face challenges, to make sense of them," documentary filmmaker Andres Veiel told us while being honored with a retrospective of his movies during Sofia International Film Fest.

2021 saw the birth of new festivals in unexpected places like the Rhodope International Documentary Film Festival in Smolyan. "Usually, major cinema events are held in Sofia, Plovdiv and Varna. This locks cultural life only in the biggest cities and this is why economic growth in the field of cultural industries in recent years has been observed mainly there and hardly anywhere else," festival co-creator and film critic Katerina Lambrinova told us in October.

Catching up with our own art history

"L'Arc de Triomphe, Wrapped", the posthumous work of legendary contemporary art duo Jeanne Claude and Bulgarian-born artist Christo, brought hundreds of thousands to Paris this September, including many coming from Sofia specifically to see the installation.

"I was charmed by the positive energy that could be felt in every aspect of completing the project," photographer Lyubomir Armutliev - Lubri, told us back in September. "One felt part of a big family; it was like everybody was moving in tandem towards the realization of Christo's dream. I felt Christo's energy everywhere."

Meanwhile, earlier this autumn, the National Gallery hosted a retrospective of artist Alzek Misheff, who, just like Christo, fled Communist Bulgaria to seek artistic freedom. He found it in Italy and although he made many well-received and well-publicized projects through the decades, his name remains little known in his home country. At 81 years old, Misheff is still living and actively working in Italy. "Actually all my performances are anti-performances. A joke at contemporary art. I consider myself a humorist above anything else," he told us in 2019, in one of the first in-depth profiles of his work in the local press.

Several other exhibitions focused on filling the vacuum in Bulgaria's art history. One of them was "The Visible Character" in the Union of Bulgarian Artists, which showed the work of artist and intellectual Boris Denev (1883 - 1969) and his daughter Slavka Deneva (1929 - 1984), both repressed during the totalitarian regime.

Dimchev's career so far is full of twists and turns. From underground treasure to bona fide pop star, he started as a contemporary artist rocking the local scene before transferring his ideas to an international level. Subsequently, he returned and became mainly known for his music. 2021 was another year he delivered shows, hits and unexpected collaborations, all of which were covered recently in a New Yorker profile and a short documentary film by Kristina Nikolova, which received a response from none other than David Lynch.

Dimchev ended 2021 with a new album - Trakia, and a US tour, a continuation of his home concert series in Bulgaria. "When I sing my songs in kitchens, surrounded by plates and forks and sinks and dishwashers, this third, new dimension opens up," Dimchev told New Yorker. "The objects of mundane, everyday life are mixed with the artificiality and perfection of art. This has complexity and depth and beauty that a normal concert, even if it's in Carnegie Hall, can never achieve."

You can also revisit our in-depth interview with Dimchev from 2019. "Every time I have live appearances in Bulgaria, I notice a lot of new faces - usually students who have just settled in Sofia," Dimchev told Capital back then. "I see that this layer of young people today is most in need of something different, something that can inspire them, motivate them to seek themselves out and distinguish from the crowd, instead of fitting into a certain frame, which is what everything around teaches them to do."

Amid the continuous cycle of repeat elections and the raging health crisis, 2021 looked brighter for Bulgaria if we focus on the cultural scene. New spaces opened, exhibitions were so numerous it was hard to keep pace with them and after a slightly muted 2020, and local literature was replete with memorable novels.

Here we take a look at several of the cultural highlights in 2021.