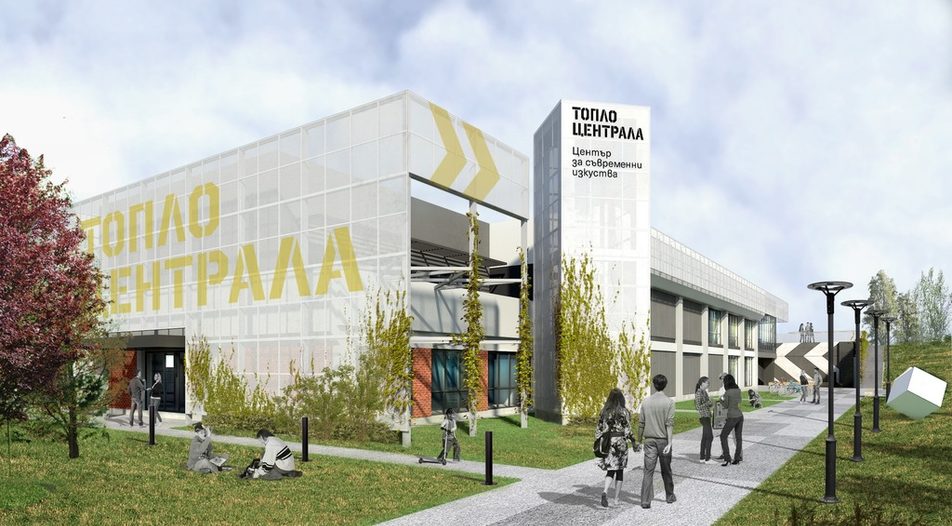 The opening of the "Toplotsentrala" ("Heat Plant", after the previous use of the building) Contemporary Arts Centre in South Park is the hottest news for Sofia's cultural scene this season. It has the mission to transform a long-abandoned space into a place that will give a stage to prospective Bulgarian artists.

"When I first walked in here in May 2014, there was oil everywhere," says the center's creative director Veselin Dimov, who was born in 1976 in Sofia and has been known mostly as a director and actor, and until recently as part of the Association for Alternative Contemporary Art MOMO and the Association for Free Theatre (ACT). From this season onwards Dimov will begin a new role - artistic director of the regional centre for contemporary arts "Toplotsentrala."

"Toplotsentrala's" main hall will open its doors to the public for the first time on 24 November with the dance performance "Cosmonaut Alley" by the Sasha Waltz troupe and guests. This should give us an inkling about what to expect from the center in the near future. Construction workers still seem to have some jobs to do ahead of the event, but from Mr Dimov's perspective the project is close to the finishing line. "By its very nature, the venue is for performing arts - dance and theater - but it's also viable for concerts and parties," he says.

The long-awaited opening has the potential to really innovate Sofia's cultural scene. Until now, attempts to create a multifunctional space, which would unite diverse art forms, have been short-lived and considerably more modest in size and ambition.

Hidden behind one of the small hills of the capital's South Park, between the historic and cultural complex "Garrison Shooting Range", the Hilton Hotel and the Perlovska River, the building could have been easily ignored - until now.

The heating plant was constructed alongside the National Palace of Culture (NDK) in 1981 and was used to heat up the mastodon building until 1983, after which NDK got its own internal heating system. The heating plant was abandoned and it took over 30 years before someone had the idea to revive it.

In 2014, as Sofia was preparing its candidacy for the European Capital of Culture (a competition was subsequently won by Plovdiv), it also hosted the international meeting of the world's largest performing arts network, IETM. Mr Dimov was a member of the board of advisors of ITEM at the time. "We started thinking about whether something could be done with Bulgaria's abandoned industrial heritage, because after all, it is something that has been happening all across Europe, and especially in the former Socialist bloc - turning abandoned buildings into centers of art and culture," Mr Dimov points out.

Mr Dimov sees the project as a rare opportunity for a meaningful relationship between the independent art scene, the municipal administration and foreign cultural institutes and networks. After an international competition in 2019, the project to redevelop the 4,895 square meter building was won by architects Mariana Serbova and Anton Kolev. The construction works started 18 months ago.

What hides in the "Toplotsentrala?"

The new space's director sees "Toplotsentrala" as an opportunity for Sofia to catch up with some global trends. "From my 20 years on the cultural scene, I have noticed that contemporary art has increasingly moved out of its traditional borders - genres are separated from each other less and less, and different means of expression are combined," Mr Dimov says.

"Toplotsentrala" will open a hall for two hundred people (Hall 1), which starts functioning this month, and in the coming months two outdoor spaces will be completed - a terrace and a small amphitheater with a 80-person capacity, an exhibition space where the program will be curated by Vladiya Mihailova, as well as a bar with a small stage.

The most ambitious and time-consuming change to the building, however, seems to be the additional construction of a two-storey residency center where visiting artists will be able to live and work temporarily in Sofia. It is planned to have an administrative part, two double and two single rooms.

The launch of the regional cultural center, whose grand opening is scheduled for 2022, is being carried out with funds from the budget of Sofia Municipality, the owner of the property, and with the financial and methodological assistance of the Ministry of Culture. As it becomes operational, the funding will be supplemented by profits generated through tickets, bar revenue, room rentals and donations.

"For the last seven years I have been researching different business models in Europe," says Dimov, whose work as a director has taken him to the stages of the Netherlands, the US, Russia, India and Indonesia. His research led him to conclude that there is no place around the globe today where it is possible for such a center to exist without subsidies, unless it is entirely commercial. "Especially in a country like ours where patronage for the arts is not developed."

Mr Dimov takes inspiration from similar places in Europe that have been abandoned, but are changing their functionality successfully. He cites the examples of HAU in Berlin, Podrum in Zagreb, Ljubljana, where the artistic community has several similar locations, including Kino Šiška and Stara Electare, the Arka Theatre in Prague, Trafó in Budapest and The Paintbrush Factory in Cluj, which has made Romania a leading force in contemporary art. The center is also a member of Trans Europe Halles (teh.net), Europe's oldest cultural network, created with the idea of bringing abandoned buildings back into the urban environment.

By the end of 2021, "Toplotsentrala" will host three foreign performances by the famous theatre and dance companies and performers Sascha Waltz and guests (Germany), Jerome Bell (France) and Emes Chuhorka and Csaba Molnar (Hungary). Find out more about the programme at actfest.org.

The opening of the "Toplotsentrala" ("Heat Plant", after the previous use of the building) Contemporary Arts Centre in South Park is the hottest news for Sofia's cultural scene this season. It has the mission to transform a long-abandoned space into a place that will give a stage to prospective Bulgarian artists.

"When I first walked in here in May 2014, there was oil everywhere," says the center's creative director Veselin Dimov, who was born in 1976 in Sofia and has been known mostly as a director and actor, and until recently as part of the Association for Alternative Contemporary Art MOMO and the Association for Free Theatre (ACT). From this season onwards Dimov will begin a new role - artistic director of the regional centre for contemporary arts "Toplotsentrala."