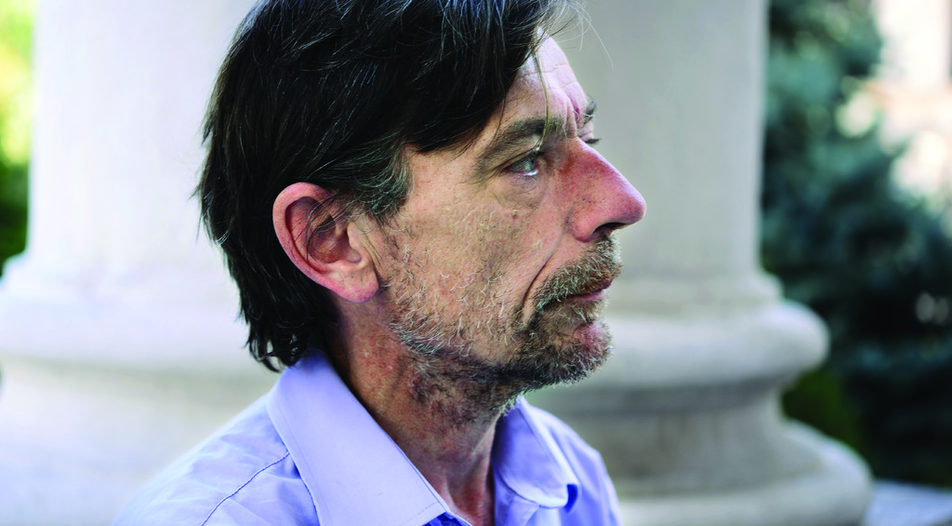 British alternative music, politics, literature and writing are just some of the subjects that poet, journalist and playwright Tom Phillips is always keen to discuss at great length - but also Balkan culture and how happy he is that two years ago he moved with his wife from Bristol to Sofia. There are some reality checks, though - like when the lady at the shop counter looks at him critically for not having the right coins.

Tom spent much of his life in Bristol as a journalist but also taught writing for the stage in Reading and creative non-fiction in Bath. His poems have been described as "plain-spoken and musical" by The London Magazine which added that "they have the intellectual and emotional depth that is only to be found in work of the highest order".

After being raised on punk in the '70s and witnessing the trip-hop revolution in Bristol in the '90s, his next cultural obsession became the Balkans after visiting Albania earlier this decade. Friendships and traveling led him to Bulgaria and his fascination quickly grew- his 2014 play Coastal Defences is based on Britain's view of the Sunny Beach resort and the massive anti-government protests in Sofia of 2013-2014. In 2016, he wrote a poetry book titled "Непознати преводи/Unknown Translations" entirely in Bulgarian despite his limited vocabulary. Recently, he has given presentations on literature translation at the University of Sofia and the Sofia Literature & Translation House. He's also editing the annual journal Balkan Poetry Today.

Tom's most recent project is Sofia Writing Challenge, the first-ever series of creative writing courses in English in Bulgaria, in collaboration with the city's Part Time Language & Culture Center.

He doesn't recall much of a culture shock during his first visits to Sofia. "That's probably because of two things: by the time I first visited Bulgaria, I'd already been traveling fairly regularly to other parts of South East Europe. Also, on that first visit, I was staying with Bulgarian friends who were very good at explaining anything I didn't understand. As is often the case with most Bulgarians, they were busy filling gaps in his knowledge of the "glorious" history and culture of Bulgaria, although it seems Tom didn't mind that. In fact, he says, he learnt a lot in the first couple of days alone.

That's not to say that Bulgaria doesn't differ from other parts of South East Europe, Tom explains. He didn't expect to encounter Secessionist-style architecture in Sofia, or an abundance of great and inexpensive restaurants - "but the surprises were all pleasant ones", he says.

The only shock was how easily it all came together: "Perhaps the biggest surprise, in fact, was how much I felt 'at home' here when I came back to Sofia for my second visit a year later."

As a person who feels so comfortable in Bulgaria despite relocating at an advanced age, he has some choice advice for those about to leap into the unknown.

"1. Find out as much as you can about Bulgarian history and culture so that you can get the most out of visiting the many historic places and cultural sites the country has to offer. Better yet, start learning Bulgarian - you can get by without knowing the language, but learning it definitely enriches the experience of living here."

"2. Buy a pair of walking boots - not just because you'll need them when it snows, but because there are lots of beautiful places to go for a walk in the mountains, forests or along the shore."

"3. Relax. As a friend of ours said not long after we arrived: 'Don't worry about anything - just enjoy your time here."

Discovering Bulgaria through its literature

With his growing vocabulary, Phillips is also immersing himself in Bulgarian literature. "In a way, it's similar to when I was a teenager and I wandered into a library for the first time and discovered that there were all these amazing books to read. It's very exciting to discover a whole new literature - a whole new room in the library - which I couldn't access before."

Some of his favorites are A Ballad for Georg Henig by Victor Paskov, which is set round the corner from where his family lives in Sofia, and Avalanche by Blaga Dimitrova which particularly appealed to him because of its "astonishing formal experimentation: I've never encountered a book narrated by 'we' before or one where philosophical reflection and poetry have been so successfully and intriguingly combined with narrative". He has also been enjoying Georgi Gospodinov's latest short story collection.

Learning Bulgarian has been key to understanding the country. "It's certainly expanded my view of the huge diversity of work that has been, and is being, produced within Balkan cultures."

Tom sees the influence of Bulgarian in his new poems, even those he writes in English. "I seem happier to leave things less fully explained when I'm writing in Bulgarian. Also, the ones I'm writing in English are starting to 'learn' from the Bulgarian ones and are all the better for it, I think."

An Exit from Britain

Tom Phillips is hugely disappointed in the UK's current political environment. Brexit attempts to isolate the country that so much benefited from its openness. As someone who grew up when everything about his local culture was considered cool, what does he make of UK's cultural legacy? Is there anything like authentic Englishness anymore? He admits there is no easy answer to this.

"England is only part of the United Kingdom and the British Isles, so its culture is inextricably linked with that of Wales, Scotland and Northern Ireland, as well as the Republic of Ireland," he says. He views English culture in a much broader context.

"At the same time, the spread of the English language means that it's also inextricably linked to other English-language cultures on all continents. My cultural identity as an English person, in other words, is complicated by these interrelationships and I tend to see the 'English' part as being just one of the layers within it."

Tom believes that England's culture has been hugely enriched by other cultures - especially those of its incoming migrant communities. "It's interesting how many writers we think of as 'the greats' aren't English at all - Joseph Conrad (Polish); James Joyce (Irish); Seamus Heaney (Northern Irish); TS Eliot (USA); Dylan Thomas (Welsh); Samuel Beckett (Irish) and so on. All of which is, perhaps, a 'health warning' - because when it comes to the contemporary British writers I value most, they generally tend to be those who actively interrogate notions of 'Englishness' and, because of that, exhibit a fundamentally internationalist outlook."

British alternative music, politics, literature and writing are just some of the subjects that poet, journalist and playwright Tom Phillips is always keen to discuss at great length - but also Balkan culture and how happy he is that two years ago he moved with his wife from Bristol to Sofia. There are some reality checks, though - like when the lady at the shop counter looks at him critically for not having the right coins.

Tom spent much of his life in Bristol as a journalist but also taught writing for the stage in Reading and creative non-fiction in Bath. His poems have been described as "plain-spoken and musical" by The London Magazine which added that "they have the intellectual and emotional depth that is only to be found in work of the highest order".