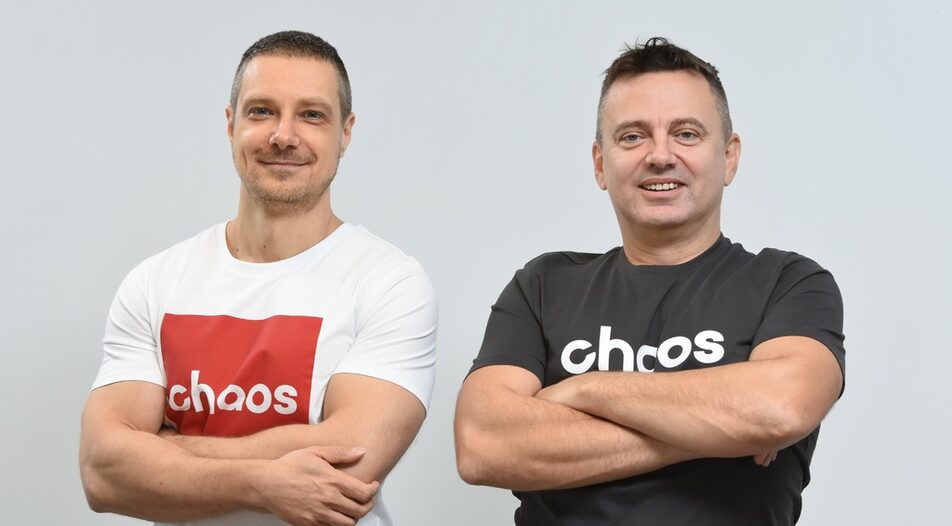 Chaos Software - from Oscars to a merger

Chaos Software - from Oscars to a merger

The Bulgarian company will merge with German-based Enscape. US-based TA Associates and the German LEA Partners will control the newly created player

Over the years, Chaos Software has become visible to the general public thanks to the Oscar and Emmy awards for technical visual solutions that it has won. Now the Bulgarian company is taking part in a merger which is likely to make it a global leader in the sector of rendering and 3D visualizations.

The company, founded by Petar Mitev and Vladimir Koylazov, is merging with Germany-based peer Enscape. Control of the new merged entity will be held by two private equity funds - the US-based TA Associates and German LEA Partners. Price and other details of the deal have not been announced but judging by similar international transactions, the Bulgarian company's valuation probably exceeds $100 million.

The co-founder of Chaos Software Petar Mitev together with his colleague from Enscape Christian Lang will be co-executive directors of the new company, which will be called Chaos. The other co-founder, Vladimir Koylazov, who has been the company's technical director until now, will head the joint research and innovation unit. The total team of the company will exceed 500 people, of whom 400 come from the Bulgarian company and its divisions in Sofia (where over 330 people work), Prague, Los Angeles, Seoul and Tokyo. Chaos will have its headquarters in Karlsruhe and there will be an office in New York. The Bulgarian office will remain the main location for the team of developers.

The two equity funds will hold a controlling stake in the new company, while Mitev and Koylazov will retain a significant (not yet disclosed) minority stake. The changes arising from the transaction have not yet been entered in the Commercial Register, but the stakes in Chaos Software held by Mitev and Koylazov (51% and 49%, respectively) were recently transferred to two Malta-registered companies, apparently in preparation for the deal.

Financial parameters of the deal have not yet been announced, but most global software transactions are valued on the basis of earnings before interest, taxes, depreciation, and amortization (EBITDA). For companies of Chaos' size the valuation typically stands at 14-to-16 times EBITDA, i.e. the deal can value the company at over $100 million based on Chaos Software's EBITDA of 12.7 million levs (about $7 million) reported for 2020.

In an interview with Capital Weekly a month ago, Mitev and Koylazov did not announce an upcoming deal, but said they had been looking for partners over the past year. Not just to sell the company, but to create a "visualization ecosystem that sets the standard worldwide." This seems to be the goal of the current four-party deal, which makes sense for several reasons.

An overview of the Bulgarian technology sector: deals, rankings, companies

"e-Bulgaria takes a leap" is Kinsights's first special report on the state of the Bulgarian IT sector:In the report, you can also find:
View report ›
Advertising

Both companies are among the leaders in the field of rendering and 3D visualizations. Established five years ago, Enscape is active mainly in architectural design and construction. Its software allows you to create realistic images, videos, panoramic photos and VR simulations. The company's products have been used by architectural studios in over 150 countries and it has more than 24,000 customers. There are no official revenue figures for the German company which has a team of about 100 people, but its global sales are estimated at about $27 million.

Chaos Software is a well-known name not only in architectural circles through its core product V-Ray, but also in other areas where it is also very popular. It is also used by design studios, advertising agencies, for visual effects from Hollywood studios. It has won Oscars and Emmys for technological achievements in film and television, and has been used in productions such as Avatar, Avengers, Game of Thrones and others. The company, founded in 1997, continued to grow in recent years, posting a profit of 11.1 million levs on revenues of 45.8 million levs in 2020.

According to Petar Mitev, investment is a natural step in the development of Chaos. "The business strategy we announced at the beginning of 2021 is aimed at creating a unified system of technological solutions for the full cycle of work of 3D artists and designers to provide them with fast, easy and efficient work of high quality, as well as interconnectedness and efficiency in working with different platforms. Enscape is one of the leading developers of real-time rendering and interactive design software with positions in architecture, engineering and construction (the so-called AEC). Combined with Chaos' photorealistic 3D visualization products, the new company will offer a portfolio focusing on three main sectors: AEC, visual effects (VFX) and product design, supporting designers throughout their work cycle - from the initial idea and design to the final photorealistic rendering," the co-founder of Chaos Software comments.

A player with such complete solutions will be able to take full advantage of the opportunities on the market, which is yet to grow. Several independent studies expect the rendering and 3D visualization software sector to grow to $6 billion in 2026 from more than $2 billion last year.

"Enscape has more than 100 employees in its offices in Karlsruhe and New York. Their rapidly growing market presence in the sector is an indicator of the potential of their team. They have strong positions in real-time rendering in the architecture, design and construction sectors. Together we can achieve exceptional results from the initial to the final phase of the design process," Mitev adds.

The Sofia office currently employs over 320 people - both programmers and specialists in the field of marketing, sales and customer relations. According to Mitev, the products will continue to exist with their current names and roles.

"We look forward to realizing the opportunities for joint development of the teams in terms of research, development and innovation, and launching new projects. The office in Sofia will remain a center for development and launch of the main products of Chaos and related services. We intend to follow our plan to announce about 50 new positions in Sofia in 2022," Mitev said. According to him, the integration of teams in some areas is forthcoming, and the employees of the seven offices will be able to work on joint projects, as well as knowledge, experience and professional development exchange.

The funds that will have a major stake in the merger

Funds financing the merger between the two software companies are well known in the technology sector. The US-based TA Associates was founded in 1968 and has so far raised more than $47.5 billion in investment. It has invested in more than 550 companies worldwide in industries such as technology, healthcare and financial services. It has offices in Boston, Menlo Park, London, Mumbai and Hong Kong.

The second financial investor, LEA Partners, is a German fund specializing mainly in technology deals. It joined Enscape as a majority shareholder (with a stake of 60.3%) in 2020.

"TA Associates and LEA Partners have extensive experience as investors in the technology sector for business growth. They are actively partnering with the organizations in which they invest, and I believe they will be valuable strategic partners and help the combined company expand its presence around the world," Mitev told Capital Weekly.

Over the years, Chaos Software has become visible to the general public thanks to the Oscar and Emmy awards for technical visual solutions that it has won. Now the Bulgarian company is taking part in a merger which is likely to make it a global leader in the sector of rendering and 3D visualizations.

The company, founded by Petar Mitev and Vladimir Koylazov, is merging with Germany-based peer Enscape. Control of the new merged entity will be held by two private equity funds - the US-based TA Associates and German LEA Partners. Price and other details of the deal have not been announced but judging by similar international transactions, the Bulgarian company's valuation probably exceeds $100 million.