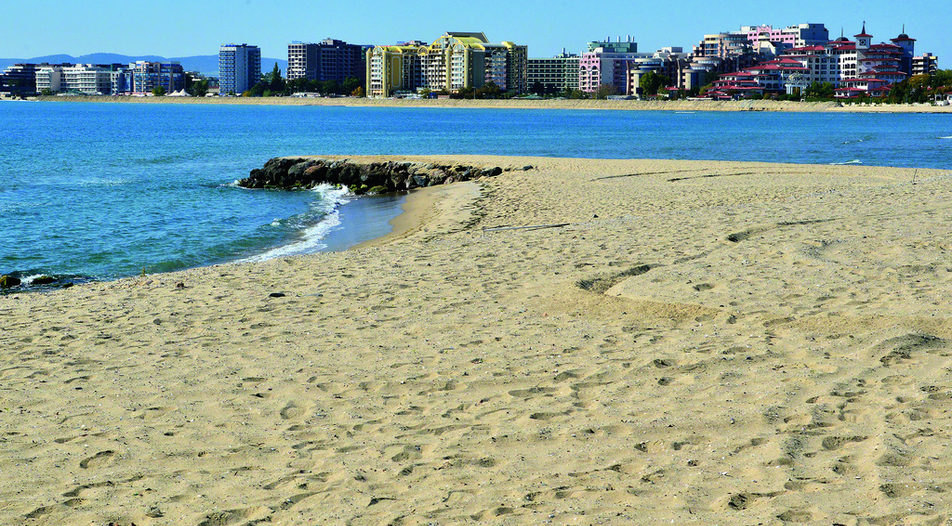 by Kalina Goranova and Mila Cherneva

- The most logical beach concession model is that of the integrated resorts, as it allows resort owners to offer package services

- One of the most popular concessionaires along Bulgaria's northern Black Sea coast is Chimimport group.

This year has been hard for the tourism industry. But what it made glaringly obvious is the legacy of the 1990s in the main marine asset Bulgaria has - the lovely beaches.

The transfer of beaches from municipalities to private owners began in 1997, with much of the concession contracts being concluded in the late 1990s and early 2000s.

The big famous beaches in the resort party destinations from the very beginning have been preserved territory of businessmen connected in the not so distant past with mafia-like structures. When privatization came around in the late '90s, after hyperinflation and bankruptcies, few people found themselves with money at hand. Then the shady figures came forward.

Another significant group of concessionaires are the owners of large hotels on the beachline. In most cases, they do not see the beach as a stand-alone profitable business but as a necessity to offer a full package of services to their customers. And the management of the beach makes them independent of the will, price and quality of service of the concessionaire.

Big city beaches deserve big businessmen as concessionaires. That seems to be the logic for the central beaches in Varna and Burgas.

In the northeastern city of Varna, Lazuren Bryag 91 was chosen as the concessionaire for a period of 20 years in early May 2020. End owner of the company is Petko Milanov Todorov, who is indirectly connected with Chimimport, a holding group with business interests across sectors of Bulgaria's economy. Until the end of 2014, he was manager of Time Brokers and Omerta, both registered at the same address as security company TIM. TIM is owned by the two executive directors of Chimimport. Chimimport's PR agency denied that the company holds beach concessions.

In Burgas, the city beach is managed by Dimitar Karanenov. His company Bulgarian Direct Reisen won a 15-year concession in January 2019, after running the beach before that too. Karanenov is the owner of the coastal Grand Hotel Primorets and rumoured as the owner of the abandoned Zname na Mira construction site just behind Arkutino beach. He is the honorary consul of Ukraine, has hotels in Slanchev Bryag and construction business. Bulgarian Direct Reisen is co-owned by his son Stoyan Karanenov, who is currently chairman of the branch of KRIB national employer organization in Burgas.

Beach service is an important part of the tourism business. When tourists book a hotel room in a resort, the package traditionally includes a beach umbrella and two chairs. So, undoubtedly, the most logical beach concession model is that of the integrated resorts, which were either privatized (like Albena and Dyuni) or developed during the transition period (like the golf complexes along the northeastern coast).

Albena is the largest hotel owner in Bulgaria with more than 6,500 rooms. The company has many shareholders, the majority owner being Albena Holding. The long-standing CEO of the resort is Krasimir Stanev. Albena also controls the Byala Laguna holiday village between the coastal towns of Balchik and Kavarna, which was built with a 40-million-lev investment in partnership with Thomas Cook Scandinavia. Albena also runs the Primorsko International Youth Center, as well as Batovski beach between Albena and Kranevo village.

Dyuni, which is located to the south, is much smaller. In 1999 it was bought by Lyudmil Stoykov for $2.7 million. The resort includes 4 hotels and a holiday village. Besides Dyuni, Stoykov also has a steel and scrap business and is known for his sponsorship of former President Georgi Parvanov's election campaign (in which year(s)?). He is believed to have been close to the VIS strong-arm group of the mid-1990s. According to information from the Ministry of Tourism the last contract for Dyuni beach was signed in early 2017. Earlier this year, the ministry said it was looking for a concessionaire.

Some of the privatized resorts changed their owners in the meantime. Once known mainly in the football circles as director of Botev Plovdiv team, Angel Paliyski bought Slanchev Den resort from Bulgarian Socialist Party activist Georgi Gergov in early 2019. Gergov bought 55% of the resort in late 1999 for 8 million levs and later acquired full control of it. The last years of his management of the beachfront complex, however, were unsuccessful: at least two of the four hotels are not open for tourists and one of them, Veronika, collapsed in the spring of 2015, killing four construction workers.

The purchase of the complex by Paliyski was backed financially by state-owned Bulgarian Development Bank, which has an exposure of 80 to 100 million levs to the resort. Unofficially, the football club director is acting in the interest - and with the brokerage - of Delyan Peevski, a member of parliament from the Movement for Rights and Freedoms party.

One of the largest complexes developed as a green-field investment is Dinevi Resort of Dinko and Yordan Dinev brothers in the village of Sveti Vlas near Burgas. The brothers set up Dinevi Group in 1989 with the aim of building gated holiday villages comprising tens of thousands of apartments. The only private marina in Bulgaria, Marina Dinevi, is also located there. In order to provide full service, the group holds the concessions on three beaches in Sveti Vlas through Venid Beach company.

Another example is construction company Glavbolgarstroy's Sveti Toma complex, which is located south of Dyuni. In 2001 the company won a 26-year concession contract for Arkutino beach. In 2017 it also got a 20-year concession on the southern part of the so-called Shofyorski beach, which is known for the notorious "retaining wall" that is going to serve as the foundation of a future hotel there in violation of construction regulations.

Another popular model, especially in resorts with many and diverse hotels, is granting concessions on separate parts of the beach. Usually beachfront hotel owners try to win the concession on the beach so that they can offer service to hotel guests directly.

Such an example is the concession on one of the beaches in Sveti Vlas, which is run by Lukoil Bulgaria's former director-general Valentin Zlatev through his tourist company Terra Tour Service. Zlatev's hotels operate under the RIU brand. They include the huge RIU Helios Paradise, a 100-million-lev investment, and the adults-only RIU Palace Sunny Beach, which opened in the spring of 2019. A third hotel was also planned to be built.

Another example is Veselin Danev and his Signa Capital company. Danev is one of the large beach concessionaires. His investment company has three hotels in Nesebar and one in Obzor, Zlatni Pyasatsi and Slanchev Bryag each operating under the Sol and Melia brands of Melia Hotels International. Through another company of his, Sandrose Holidays, he won a lease contract on Byala South beach in 2016.

Green Life Beach Resort is yet another example of a leaseholder managing the portion of the beach in front of an apartment complex. The concession belongs to Orko Beach, a company of Greenlife Resorts, and its 15-year term expires in 2031. The same owner holds the concession of the beach of Veselie camping site though Black Sea Beach. Greenlife Resorts is owned by N.P. Invest, a company of Sofia Region governor Nikolay Pehlivanov, which is managed by his father Yanko Pehlivanov. The complex opened in 2009 and has gradually expanded since. At least half of the visitors are Russian tourists.

A little further north is the beach of Fairplay Properties Management, Sozopol West Part 2. It is intended to serve the guests in Santa Marina Holiday Village. Founder and board member of the company is Mario Zahariev.

One of the most popular concessionaires along the northern Black Sea coast is Chimimport holding group. Through connected companies, it has various beach enterprises: from the beaches of Sts. Constantine & Helena resort to the major beaches in Varna and to a small camping beach on the southern coast.

The group is one of the largest seaside hotel owners. Its Sts. Constantine & Helena Holding manages six-holiday hotels in the eponymous resort and in Zlatni Pyasatsi resort 8 km to the north. In addition, the group has hotels in Bansko and Varna. Sts Constantine & Helena Holding holds concessions on seven beaches. As mentioned above, Lazuren Bryag 91, which is also connected with the holding, is the concessionaire of Varna's central beach. Earlier this year another connected company, Holding Varna, got a 20-year concession on Varna's Bunite beach. A few years ago the group got positions further down the coast by leasing a portion of the beach of Gradina camping site.

The strong-arm concessionaire of the 1990s

Undoubtedly, the most popular image of the beach concessionaire is that of the 1990s' businessman who started his business in one of the strong-arm groups of the transition period. Such type of concessionaires is concentrated on the much-visited beaches in Zlatni Pyasatsi, Slanchev Bryag, Sozopol and Nesebar, as well as on less attractive beaches in Primorsko and Kiten.

For more than a decade the concession on Zlatni Pyasatsi's beach has been held by Lams Holding Group. The company is connected with Ivan Lapchev a.k.a the Rumin, who is believed to have been close to former SIC security group.

It is generally known that the successors to VIS and SIC control the beaches of Slanchev Bryag and Nesebar. Until a few years ago one of the most attractive beaches, Slanchev Bryag North, used to be run by Suninvest.

Most of the company's owners have hotels and bars in Slanchev Bryag and other resorts, for instance, Sava Charoleev (majority owner of Burgas-based Pobeda sugar plant), Vetko Abadzhiev, Rumen Chandarov and former GERB MP Emil Dimitrov. In 2016, Suninvest's contract was terminated due to constant breaches. The concession was given to Bulimpex, a company indirectly controlled by Mladen Mihalev - Madzho (WHO IS Madzho?). Though a new concessionaire was chosen in 2018 - Golden Sands Beach of Miroslav Marinov, the beach is believed to remain under Madzho's control through connected persons.

The concession on Slanchev Bryag's southern beach, better known as Cacao Beach, was given to Ilian Ivanov's Sis 2012 earlier this year. Ivanov is said to have worked for Irida-71 of Radostin Barzanov, a.k.a. Rado the Sun, who is a former bodyguard of the now-deceased Vasil and Georgi Iliev brothers of VIS strong-arm group.

The beaches of several large bays around Sozopol are distributed among different concessionaires. These include Gradina and Zlatna Ribka north of the town, as well as Kavatsi and Smokinya to the south. From peaceful hippie-style camping communities, those places have turned into party destinations with concerts, big noisy bars and luxury bungalows that are particularly popular among the young.

- The most logical beach concession model is that of the integrated resorts, as it allows resort owners to offer package services

- One of the most popular concessionaires along Bulgaria's northern Black Sea coast is Chimimport group.

This year has been hard for the tourism industry. But what it made glaringly obvious is the legacy of the 1990s in the main marine asset Bulgaria has - the lovely beaches.