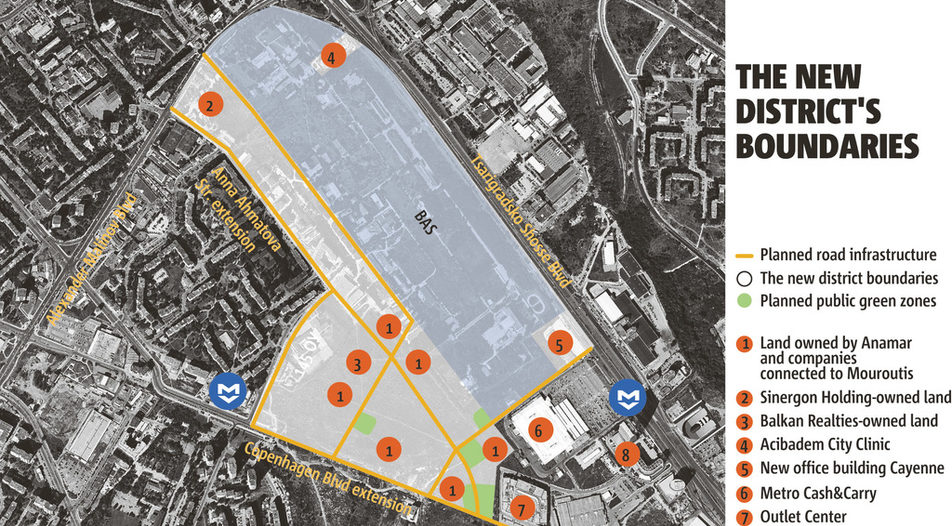 A new business district is in the pipeline in the southeastern suburbs of Sofia.

A 16.8-hectare area sandwiched between the research centre of the Bulgarian Academy of Sciences on Tsarigradsko Shosse Blvd, the Capital Fort office high-rise and the Metro Cash&Carry store may soon become a new district of the Bulgarian capital, provisionally called Mladost 5, after the existing district it will border.

The municipal government is finalizing the regulation of the area which is likely to be completed by the end of this year. According to the General Development Plan of Sofia adopted in 2009, the area bordering one of the city's busiest boulevards will be a mixed-use zone.

In an attempt to break with the tradition of chaotic construction works that have plagued Sofia for years, the municipal government plans to first build the public infrastructure of the future district that will be located a five-minute drive from Sofia Airport, Trakia highway and the city centre. The area northeast of the existing Mladost 1A residential district will require a new boulevard, tram tracks, new streets, heating, water and sewerage pipelines and power supply lines, etc. but no clear deadlines have yet been set for the works.

Almost all plots of land situated in the triangle Metro Cash& Carry - Tsarigradsko Shosse Blvd. - Alexander Malinov Blvd. is owned by Greek native Christos Mouroutis. He plans to build a business park there but given the huge investment funding needed and the typical nature of his transactions to date, it is quite possible that he will sell the project.

The future district will span less than 1% of the territory of the whole Mladost district, where offices, hotels and residential buildings can be erected. It will be almost twice the size of the existing Sofia Business Park (spanning a total area of 8.9 hectares), located near Mladost 4 and Sofia's ring road.

"The municipality has chosen, in my opinion, the right way to first set up the communications, the engineering networks and only then issue building permits for investment projects," says Snezhina Stanoeva, an architect who is a member of Urban Group - a consortium that has a framework contract with the Sofia Municipality for the design of development plans. In her words, the municipal administration has succeeded in resisting relentless pressure, as many developers have had designs on the area.

The planning of a new section of Copenhagen Blvd. - from Metro station No. 18 to Tsarigradsko Shosse Blvd., is the most serious challenge, according to Ms Stanoeva. "There is no other such project in Sofia with such a lavish use of land as Copenhagen Blvd," she adds.

The new section of the boulevard will reach 42.7 m in width and its length will be about 1.7 km. For comparison - old thoroughfares in Sofia's central part like Hristo Botev Blvd. and Maria Luisa Blvd. are only 20 meters wide. In the middle of the new boulevard, there will be a tram line, separated from traffic by green belts, and along its total length, there will be a bicycle lane.

"The boulevard is designed in such a way as to absorb the maximum possible traffic, which will come from the new complex," says Ms Stanoeva. She maintains that the new boulevard will automatically ease traffic on Alexander Malinov Blvd. - the main link of Mladost district to the city centre and one of the most congested boulevards in Sofia. Besides the new boulevard, the plan envisages a new street alongside the Metro Cash&Carry store, which will be the only one running parallel to Alexander Malinov Blvd in the whole neighbourhood.

Although the plans for extending Copenhagen Blvd. are over 10 years old and the designers have done their part, the municipal authorities are not ready to start construction works in 2019 because these works have not been valued yet. Their cost may well reach several tens of millions of levs - financing which is not included in the city's 2019 capital investment program. Vasil Nachevski, a representative of the Transport Directorate of Sofia Municipality, explained that the reason lies in the cumbersome land expropriation procedures. "Until they are completed, nothing can happen," he said.

The maximum permissible building density in the area is 60%, one of the highest in Sofia. This is logical because there are no existing buildings in the area, no housing is envisaged, for now, just an office complex. The area allocated to construction works is 10.86 hectares. Of these, 60% or 6.5 hectares will be for buildings, and the remaining 40% - for landscaping. A quarter of the acreage of the land plots constituting the area has already been deducted in order to build the engineering infrastructure.

"Landowners can build whatever they want within the set parameters - towers, skyscrapers, campuses. Any skyscraper will not be out of place here, as it will not be situated in a residential environment," says Ms Stanoeva. The plan's critics point out that no kindergarten is planned in a complex despite the mooted construction of 60 apartment blocks. The designer disagrees: "The plan is being criticized either out of ignorance or out of evil intent. The zone has been conceived as a business park precisely because a group of office buildings is needed in that area which is highly suited to this purpose. If the investors think that they have to provide housing or kindergartens to the employees in the complex, they will be able to do so and finance these complementary buildings themselves," the architect explained.

Who owns the terrain?

The largest landowner in the area is Greek businessman Christos Mouroutis through the companies EuroCapital Finance and its associate structures Anamar Development and Arceland Management. "We are planning to build a technology park," Mr Mouroutis told Capital. There will be a university complex in it, he said, adding that he has a preliminary franchise contract with an unnamed foreign university. There will also be a technological accelerator and business incubator in the complex, office space for start-up companies and a small residential area.

"We still have no specific parameters and architectural plans: we will follow the municipal plan coupled with the idea for the most favourable positioning of the individual buildings," he explained.

The roughest estimates show that investment in the proposed business park will amount to some 100 million euro, said Mr Mouroutis, who announced that he represents the landowners of the area. "We have consolidated about 80% of the private land plots; if there are other owners, I'm sure they will join our project. We want to make something significant for the city," he said.

Born in Athens, Mouroutis has lived in Bulgaria since 1999. He is a member of the management of EuroCapital Finance and owns shares in Arceland Management. Some years ago, his companies made several speculative land deals such as Sofia Airport Center, Plovdiv Gallery (now Plovdiv Plaza), and others.

The largest landowner in the region is the joint-stock company Anamar Development with 6 hectares. EuroCapital Finance owns about 1.17 hectares acquired in 2006. Another owner is Dobrin Ivanov, who is a partner of Mr Mouroutis in Arceland Management, adding a little over 3,000 sq. m. Thus the area controlled by Mr Mouroutis totals almost 7.5 hectares. However, the owners will be able to erect buildings on a smaller area, as plots have already been reduced by 25% in favour of the municipality in order to build the infrastructure.

Apart from the companies linked to Mouroutis, owners of land in the area include other individuals. One of the bigger plots with access to Alexander Malinov Blvd. is owned by Bulgarian businessman Bedo Doganjan's Synergon Holding.

Several companies have smaller plots of land - Cypriot-owned Morpho and Latvian-owned Balkan Realty. A small part of the area is owned by individuals and Vrachev 2 company.

A 16.8-hectare area sandwiched between the research centre of the Bulgarian Academy of Sciences on Tsarigradsko Shosse Blvd, the Capital Fort office high-rise and the Metro Cash&Carry store may soon become a new district of the Bulgarian capital, provisionally called Mladost 5, after the existing district it will border.

The municipal government is finalizing the regulation of the area which is likely to be completed by the end of this year. According to the General Development Plan of Sofia adopted in 2009, the area bordering one of the city's busiest boulevards will be a mixed-use zone.