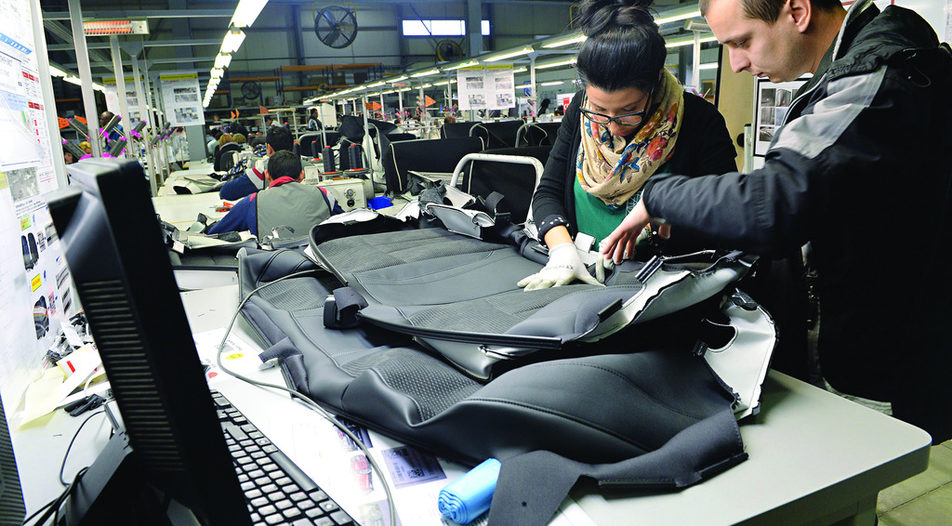 When Bulgaria is too expensive

When Bulgaria is too expensive

The Canadian owner has ceased production at ALC’s plants over a labor shortage, higher wage costs and failure to get a price increase from BMW

Seven years ago, it was an industrial fairy tale in Bulgaria: a foreign investor opened a factory for leather seat covers for BMW and Audi. In time the factories increased to three and the number of employed reached 1400. But the story has no happy ending: the factories have shut down. The price of labour in Bulgaria, it turned out, is above the sustainable level for automotive customers.

And when the owner of the plants is a global company with many production facilities and multi-million earnings, the decision to close a loss-making unit is quick. Thankfully, the shutdown of the business is neither a precedent nor a trend because dozens of investors are still building new factories for automotive components. And most of those already in Bulgaria are profitable. Yet this is not to dismiss the seriousness of the closure.

The factories of ALC Bulgaria - in the town of Ihtiman and the village of Musachevo near Sofia, which manufactured seat covers for BMW and Audi, have ceased production since January 21. The third and newest enterprise - in Blagoevgrad - which manufactured steering wheel upholstery for Volkswagen, employing some 260 people, shut down a few weeks later. The decision was taken by the Canadian owner, Exco Technologies, which filed a voluntary liquidation petition. The official explanation for Exco's decision is "the ongoing operating losses at ALC driven by its failure to reach an agreement with its primary customer for continued price support. Given the increase in local operating costs and change in labour conditions over the last several years, ALC's operations had become unviable without improved pricing".

The Canadian company became the owner of ALC after acquiring the original investor, South Africa's Automotive Leather Company (ALC), in 2014. Since the deal was designed to give the company access mainly to Eastern Europe, two years later Exco closed production in Africa (Lesotho) and ALC's entire business was actually concentrated in the Bulgarian company. As part of its European activities, however, Exco preserved its enterprise in Morocco, Polydesign.

The deterioration in ALC's financial results is no surprise. In 2017, its revenue shrank nearly a quarter to 122.7 million levs and its net loss widened six-fold to 8.4 million levs. The drop in sales was due to the completion of one of the large customer programs, i.e. seat covers for BMW 5 and 7 Series. At the same time, the company increased the sales of covers for Mini (also a BMW brand). However, their price was lower while production costs were virtually unaltered, which affected the company's bottom line. The same year, ALC incurred additional expenses, after equipping its new production facility in Blagoevgrad.

For a public company like Exco the waiting time is now obviously over. "Over the past few years, we have spent considerable financial and operational resources to improve ALC's results only to be met with more challenges along the way," reads Exco's latest report for the financial year ended September 2018.

According to the company, these challenges intensified as Bulgaria's unemployment level dropped to its lowest in a decade. This drove wages upwards, causing employee turnover and absenteeism to climb to unsustainable levels. Moreover, the company's projections showed that labour conditions were unlikely to improve in the short term. Such a situation was a serious problem for manufacturers like ALC, where production is labour-intensive and automation is practically no option and where margins, on the whole, are small and under constant pressure from automotive customers who aggressively try to curb their expenses.

Canada's Exco Technologies has revenues of Can$576 million ($431 million) for the financial year 2018. Some 65% of its business is in the area of automotive solutions and the remaining 35% is in tooling solutions. The company has 18 plants in 8 countries and 6757 employees. Its market capitalization is about Can$390 million.

As early as last October it emerged that the Canadian owner was changing its strategy for Bulgaria and revoking earlier plans to expand and diversify production. It abandoned the idea of launching additional production in Blagoevgrad and the factory moved to smaller premises. The company initiated a voluntary wind-down of certain programs for automotive manufacturers and shifted some of ALC's production volumes to Polydesign in Morocco. Exco's aim was to limit production in Bulgaria to sewing BMW Mini seat covers and thus "enable the development of a workforce that is more reliable and motivated".

The company managed to receive temporary price support from its primary customer, which was quickly reflected in its results. Exco's report shows that although ALC was still in the red for the financial year 2018, its loss decreased from Can$6 million to Can$1.2 million. Moreover, in the last quarter of the financial year (July - Sept) the Bulgarian unit turned to profit. Exco's data also show that for the last three months of last year (first quarter of financial 2019) ALC generated some Can$20 million revenue.

No factory without BMW and workers

Pivotal to preserving the business in Bulgaria was getting a permanent price increase from the primary customer, BMW. The failure to achieve that explains Exco's final decision to cease production. It's unclear where the German automotive manufacturer intends to have its seat covers produced now but the location is expected to be outside Europe where the company will get a lower price than that sought by Exco.

In addition to the problem with BMW, the Bulgarian labor market deteriorated. The Canadian company had serious doubts that it would be able to fulfil its contracts given the workforce shortage and high absenteeism rates. According to ALC data, every day between 15 and 20% of employees did not come to work. That meant that in order to observe the terms, which are extremely strict in the automotive industry, the company sometimes had to send its deliveries by plane, which in turn substantially increased its expenses and significantly undermined its financial results.

Labor expenses also increased, reaching 20% of total in 2017. The gross wage in the company is 900 levs a month, part of which is paid as a retainer. Although the amount does not sound impressive, it should be noted that most workers are hired without any prior experience and trained in-house. For many employees, however, that is no incentive and they often prefer to work in the grey economy where employers' expenses are the same but workers get more money net.

Exco was unwilling to pump more money into a money-losing enterprise and therefore it did not consider the option of selling the business, which would have taken at least a few months to complete, sources told Capital. Besides, that would have brought a possible deal closer to one of the most unfavorable periods for the company, i.e. between April and June, when absenteeism accelerates and operating results suffer.

The company has already informed the Labor Inspection and is looking for alternative employment for the redundant workers with the help of the government's Employment Agency. "We are doing our best to support our people. We have very good workers, some of whom have been with us since the very beginning," ALC CEO Shaun Bosch said. Significantly, about two-thirds of the employed are Roma, including some of the company's best workers. ALC's managers hope that some of the specialists will be able to move to Ruse where Germany's Bader plans to build a plant for automotive seat covers.

ALC's case shows that Bulgaria is probably approaching the limit of wages for profitable production requiring unqualified manual work (like sewing). When that will become a trend is difficult to predict. The first portent, however, is already here.

Seven years ago, it was an industrial fairy tale in Bulgaria: a foreign investor opened a factory for leather seat covers for BMW and Audi. In time the factories increased to three and the number of employed reached 1400. But the story has no happy ending: the factories have shut down. The price of labour in Bulgaria, it turned out, is above the sustainable level for automotive customers.

And when the owner of the plants is a global company with many production facilities and multi-million earnings, the decision to close a loss-making unit is quick. Thankfully, the shutdown of the business is neither a precedent nor a trend because dozens of investors are still building new factories for automotive components. And most of those already in Bulgaria are profitable. Yet this is not to dismiss the seriousness of the closure.