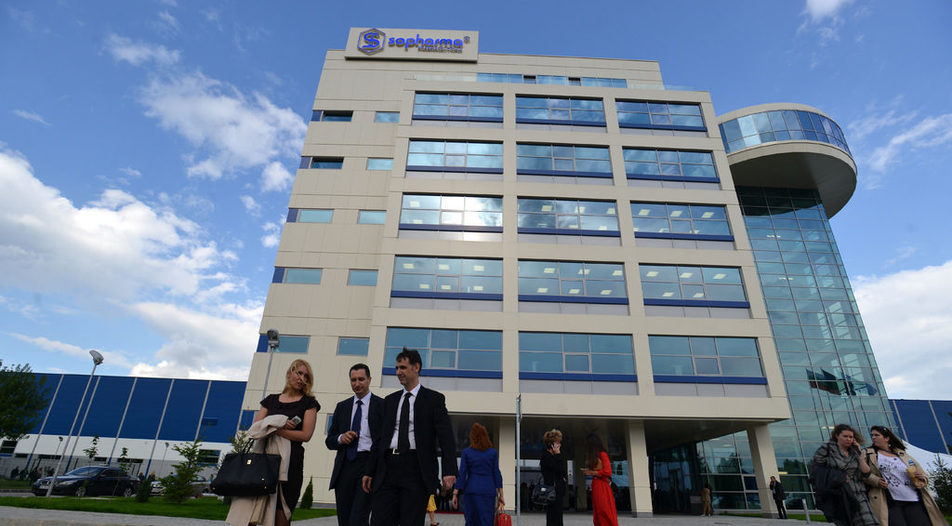 Drug sales are rising again, as are the revenues of the largest companies. Both indicators rise by 11%

• Higher profits with margins of more than 20% are reported by drug makers with foreign markets - Rompharm, Huvepharma and Sopharma.

• Phoenix is second again in terms of sales revenue and, according to IQVIA data, it is a leader in local drug supplies with 21% share.

• 4.6 billion levs in revenue have the top 15 companies in the ranking. Eight of the companies are Bulgarian-owned.

The pharmaceutical market in Bulgaria has accelerated once again in 2017 - the growth in sales revenue is 11% in terms of value, according to IQVIA world organization. Last year's drug sales at wholesale prices alone, excluding pharmacy surcharges of about 15-20%, are estimated at 3.164 billion levs. The revenue of the top 15 companies in the pharmaceutical sector has also grown by 11%. However, on the list are foreign as well as Bulgarian traders and also manufacturers, focusing mostly on foreign markets.

Ten of the 15 companies on the list are traders and domestic sales grow again, driven by oncology drugs (with a 14% jump), influenza epidemics and, in general, the unmet needs of a number of chronically ill patients. This, as well as the consolidation in the sector, is the reason for the continued noticeable growth in the pharmaceutical companies' sales in the ranking.

Almost all companies on the list are profitable once again, with an average profitability of over 8% - higher than in other sectors. Manufacturers traditionally have higher profit margins.

Sopharma Trading is in first place for yet another year in a row; with sales of 685 mln levs it overtakes by about 25 mln levs the second company in the ranking and by 150 mln levs the third one. Traditionally, the top spots are occupied by drug wholesalers, which are the companies with the highest turnover. Thus, companies having both trading and manufacturing operations enter the ranking, such as Huvefarma, the owner and distributor of veterinary drug producer Biovet and several foreign factories, as well as Rompharm, the Bulgarian distributor invoicing the sales of the group's Romanian plants to the Russian and CIS markets.

Sopharma Trading officials comment that the company's growth hasn't ceased for 11th consecutive year since its founding. "In 2017 we followed our strategy to diversify our business model in line with global trends for vertical and horizontal integration in the healthcare sector. Our traditional segments - pharmacy and hospital markets, on the other hand, provided us with a stable foundation and growth in order to be able to realize our expansion plans in the new business lines," comments Dimitar Dimitrov, executive director of Sopharma Trading.

In the first half of 2017 the company increased its retail market by acquiring pharmacy chain PharmaStore in Bulgaria and at the same time it made the first step towards leading position in Serbia by acquiring a majority stake in local wholesaler Lekovit. Sopharma Trading owns one of the biggest online pharmacies with the same name, as well as the SOpharmacy chain of pharmacies.

Growth through digital technologies is part of the strategy of the second company in the ranking in terms of revenue. Like the previous year, this is Phoenix Pharma, the Bulgarian company of German-based pan-European drug distributor Phoenix group. The chairman of the BoD and managing director of Phoenix Pharma, Nikolay Kolev, notes that the company also develops software products that are closely related to the management of pharmaceutical units such as wholesale warehouses, pharmacies and drugstores, and with its software product Pharmacy Expert it is a market leader again.

Phoenix takes once again the second place in the ranking in terms of revenue from sales, and according to IQVIA data it is a leader in the supply of medicines with 21.12% share of the Bulgarian market. In the battle for market leadership among four major drug suppliers holding over 80% of supplies in Bulgaria, Phoenix has worked for a third consecutive year in the red, striving to invest in expansion. Its loss in 2017, however, is smaller than in the previous years.

"The net sales of the company on the pharmacy market grew by 8% in 2017 and those on the hospital market - by 27%," Kolev says. He notes that the company's other businesses - logistics and pre-distribution, pharmacy software sales, data sales and other marketing services - also posted very good results last year.

"We are developing steadily, we have signed partnerships with hospitals, wholesale traders and the major pharmaceutical companies. According to our observations, the growth of the market in terms of turnover comes mainly from innovative and expensive medications and significantly outstrips the growth of the number of packages sold," commented Veselin Mareshki-son of Pharmnet. The company founded by his family owns the largest chain of pharmacies of the same name - Mareshki, in Bulgaria, which has 400 units. They are the largest customers of the distributor.

According to Mr. Mareshki-son, the wholesale drug trade is a mature and significantly regulated market, so it is difficult to introduce new disruptive practices. Pharmnet rather relies on improving efficiency by introducing new technology solutions.

He believes that the wave of transactions - the acquisition of Actavis Generics by Teva in 2016, the deal of Sopharma Trading for acquiring the PharmaStore chain in 2017, has subsided and the companies will focus on the integration of their newly obtained businesses.

Against the background of the growing business of the wholesalers, the only distributor whose revenue has continued to fall for the second straight year in 2017 is Alta Pharmaceuticals with 5% reduction. The company has its own chain of pharmacies, after buying this year the biggest pharmacies of the Adonis chain in Sofia.

Unlike the distributors, of which the first two were moving in tandem with the market in terms of revenue growth, there was only one exception in the pharmaceutical sector last year.

It is Balkanpharma Dupnitsa, the pharmaceuticals producer owned by Israel's Teva. The production capacities of the plant in the city of Dupnitsa are the largest in Southeast Europe for manufacturing tablet forms but the company reported no increase in sales in 2017. At the end of December last year Teva announced a 25% global staff cut and probably part of it had been carried out during the year in the plant in Dupnitsa, whose staff decreased by 10%. This might be due to the declining need for human involvement in the fully automated drug production processes. At the same time, Teva's trading company Actavis, which offers in Bulgaria the global portfolio of the company, registered sales growth of more than 23% after the merger.

The upshot of Sanofi Bulgaria is also due to consolidation of the results of acquired companies. The French concern consolidated the sales of innovative medicines, rare disease medications, vaccine business and generics divisions, which led to a rise in revenue of 365%.

Sales growth is also reported by the veterinary drug manufacturer Biovet. It exports animal health products through its parent company Huvepharma which has a diverse business portfolio.

Bulgarian pharmaceutical company Sopharma marked a two-digit growth in sales last year, increasing its exports as well. Bulgarian health funds have continued to pay more often than not for costly original medicines for yet another year, and despite the promises of all political parties, they are not conducting a pro-generic policy. Thus, the company achieved its double-digit growth in the worst possible environment - lack of health reform, no policy to promote replacement of expensive drugs by generic ones, regulators constantly decreasing drug prices, and fierce competition with other generic companies - and on top of this it increased its profit.

No companies from the Novartis group are present in the pharma sector ranking. The Swiss concern does not consolidate its companies' results. At the market level, though, Novartis would remain market leader for the year, if the sales of its original, generic and ophthalmic products divisions were consolidated, analysts say. The basis of its revenue growth are precisely the innovative medicines of the group, which are paid for by Bulgaria's state-run National Health Insurance Fund (NHIF).

Revenue growth is also reported by Roche Bulgaria, the local unit of the Switzerland-based concern, whose main production is in the oncology domain.

Though minimally, GlaxoSmithKline also increased its sales in Bulgaria last year. The sales growth was due to innovative therapies in the fields of HIV and respiratory diseases.

Last year was successful for the U.S.-based AbbVie because, in addition to the company's current therapies, NHIF started to pay for the treatment of patients with hepatitis C. AbbVie produces a drug for such treatment and the Bulgarian unit of the company made its debut in the ranking of the top 15 in the sector.

What lies ahead in the sector

The three companies at the top of the ranking anticipate growth in sales this year. According to the executive director of Sopharma Trading Dimitar Dimitrov, the trends have several names - globalization, which means consolidation, digitization and innovation.

"Although some global studies say that the pharma industry is one of the sectors that are lagging behind the global pace of technology penetration and innovation, it can not be bypassed by the new disruptive wave. There are several examples of new players and technologies that will change the model of classical healthcare - Amazon, telemedicine, artificial intelligence. A number of futurists predict that one of the professions that will undergo the most serious transformation in the future will be that of healthcare professionals. Therefore, we want to be ready and be the first to be the engine of this revolution in the sector in our region," says Dimitrov.

According to Nikolay Kolev of Phoenix Pharma, the pharmaceutical market in Bulgaria will continue to grow in 2018, but at a slower pace than in previous years.

"The slowdown can already be felt and in April, for the first time in many years, the drug market declined by 2.8%. The main trends of previous years, such as price erosion, reduction of distributor margins, increasing of the regulatory burden and toughening of quality requirements, consolidation of the drug market and intensifying vertical integration of companies in the sector will continue in 2018. Slower growth of the market, added to this, will increase the challenges facing the distributors", said Kolev. He added that as part of a global company, the Bulgarian unit of Phoenix has the resources and knowledge to continue to grow successfully in the difficult environment.

Pharmnet sets itself the task of growing in a segment where other wholesalers such as Sopharma Trading and Phoenix have long been present - hospitals. "With all the peculiarities of the hospital market, we intend to be more active on it this year - up to now it has not been our priority," said Mareshki-son.
• Higher profits with margins of more than 20% are reported by drug makers with foreign markets - Rompharm, Huvepharma and Sopharma.

• Phoenix is second again in terms of sales revenue and, according to IQVIA data, it is a leader in local drug supplies with 21% share.

• 4.6 billion levs in revenue have the top 15 companies in the ranking. Eight of the companies are Bulgarian-owned.