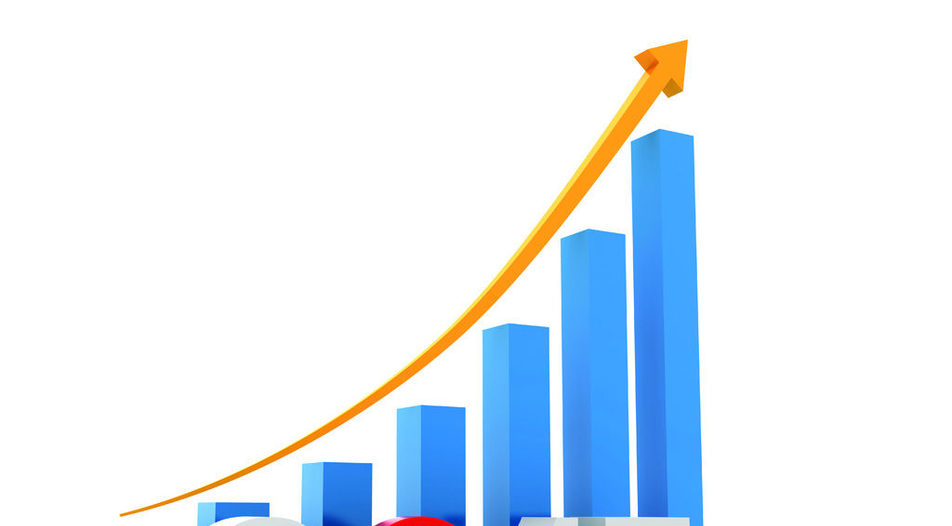 A year of record profits

A year of record profits

• The revenues of the top 100 companies rose by 14% year-on-year on average in 2017 driven by rising fuel and metal prices and expanding manufacturing plants.

• Machine building and IT companies were the most rapidly and consistently growing businesses.

For the large Bulgarian companies, 2017 was the best in the last six years in terms of revenue growth. In terms of profits, their achievements were unprecedented.

The combined revenue of the top 100 companies rose to 66 billion levs last year, an average annual increase of 14% on 2016. The growth is due both to higher sale prices and increased volumes. As a result their combined profit grew by a whopping 35% to 3.4 billion levs.

The revenue of the top 300 companies grew at a similar rate - by 13% to 93 billion levs. They recorded a profit of more than five billion levs, growing by record 28%.

In general, the largest 300 companies, which account for around 0.1% of the total number of companies operating in Bulgaria (over 300,000), generated a quarter of the combined profit declared to the tax authorities by all companies in the country.

At a higher pace

Unlike the revenue of the top 300, the combined revenue of all companies in Bulgaria grew much more slowly. According to data provided by the National Revenue Agency, 337,000 active companies reported an aggregate turnover of 335.7 billion levs last year, an increase of less than 1% on 2016, i.e. large companies are growing much faster than the average for the country. The first 100 of the 300 biggest Bulgarian companies contributed around 20% of total reported revenue in the country, while the following 200 added 8%.

The first one hundred beat the average expansion of the economy, which was 3.6% last year, with GDP growth slowing down from 3.9% in 2016. The nominal value of GDP in 2017 was close to 98.6 billion levs. Due to the expected growth and inflation the revenues of the 300 largest companies will probably exceed 100 billion levs this year.

These results came against the background of rising international prices of key commodities. Crude oil rose by almost 30% in a year and copper increased by 26% in US dollar terms. Considering that the US dollar fell by around 10% against the euro and the Bulgarian lev in 2017, the final effect in the statements of the Bulgarian companies in the sectors of oil and metals was a price increase of some 15%.

In the top 100 group there are 13 fuel companies with combined turnover of 15 billion levs and a profit of only 380 million levs. Their average revenue growth topped 18%. According to the companies, 15% was due to the international price factor and the remaining 3% to 4% - to the increased consumption of fuels. The remaining 87 non-fuel companies within the group grew by 13%. If the metal-related companies, which have eight representatives in the top 100 group with a median growth of turnover of 44%, are eliminated, the rate of revenue increase falls to 8%. The rate of revenue growth in the second echelon of big companies (101 to 300) is somewhere in the middle - 11%. The explanation is that this sub-group is more diverse and there are not too many representatives of the fuel and metal sectors.

The most profitable year

Only 10 of the top 100 companies by revenue operated at a loss in 2017, which is a record low percentage, since they traditionally include large state and municipal companies in the sectors of energy and transport, which most often report negative financial results. Thus, the net profit of the top 100 group came in at 3.4 billion levs, in 2017, a 35% increase compared to a year earlier. The sub-group of the 90 profitable companies had a profit of 3.7 billion levs.

For yet another year the profitability of the top 100 increased in 2017, reaching 5.2%, while the net margin was 4.4% in last year's ranking. As many as 14 companies of the top 100 recorded three-digit earnings in millions.

With the total net profit of all companies of 25.5 billion levs, the 100 biggest of them contributed 15% of the profits declared in the country.

After the first hundred, the next 200 companies in the ranking made a total profit of 1.6 billion levs, or 16% more compared to 2016. However, 27 companies out of these 200 ended 2017 at a loss. Again, they are mainly state-owned but there is also a group of energy traders and producers. The explanation for the first ones is that they did not forecast market trends properly and concluded contracts to deliver electricity at low prices but the price of electricity on the energy exchange rose.

And the biggest gain comes from ... Pirdop

The strongest result of almost 400 million levs is registered by the second-ranked in TOP100 - Aurubis. This is the highest net profit of a non-financial corporation reported in the 12 years of existence of the ranking by Capital, and possibly in the new corporate history of Bulgaria.

The second place is occupied by Lukoil Neftochim with a net profit of 304 million levs, which is an all-time record for the Burgas-based oil refinery. It had reported losses for eight straight years before closing 2016 with a small profit and achieving significant earnings in 2017

The third most profitable company is A1 Bulgaria (the new brand of Mobiltel) with earnings of almost 200 million levs in 2017. The mobile operator had posted even higher profits but this was more than 10 years ago.

In the ranking of the companies with the highest profitability, the leaders once again come from the sectors of arms and gambling. However, the top 50 group also comprises many representatives of the sectors of machine building and pharmaceuticals with a two-digit net margin.

The company that registered the largest loss in 2017 was state-owned Maritsa East 2 TPP, where the explanation is in the costs of the purchase of CO2 emission allowances. State owned railway infrastructure company NRIC and municipal heating utility Toplofikatsia Sofia complement the trio of biggest loss-makers.

Generally speaking, the group of big companies was not the most actively hiring one. With an average staff growth of 4%, the top employers among the top 300 companies in terms of income obviously acted conservatively last year. When it comes to the larger ones, they were more likely to expand through automation and robotization, rather than create new jobs. Increases were observed mainly in manufacturing enterprises working for exports, and in the IT sector.

The profile of the big ones

Traditionally, there is a large number of energy companies in the TOP100 ranking - 18, there are 13 companies active in the sector of fuels and 10 manufacturers of machinery and equipment.

The next 200 display a greater diversity of sectors, there is a change in the most widely represented ones: 23 manufacturers from the sector of machinery and equipment, followed by 16 retail chains and 11 companies of each of the fuel, energy and transport sectors.

The champion in terms of revenue growth is the sector of metals with an average increase of 43% in the sectoral ranking, with the achievement mainly price-driven.

Actually, the two most rapidly expanding sectors in 2017 were software and construction, growing by almost 20% each. Despite a shortage of computer specialists, the technology companies continued to grow their revenues. They already have their first representative with a turnover of more than 100 million levs - Paysafe, and seven of its peers have revenues of over 50 million levs each. No software company in Bulgaria had recorded a revenue of this volume in the previous four years.

In the construction sector which is recovering from the crisis of recent years, revenue growth in 2017 came on the back of state procurements and increased demand in the property sector that facilitated construction of large office and residential complexes, hotels and warehouses.

The sector of fuels had a similarly high achievement - an 18% revenue growth, but it was mainly price-driven as well.

Machine manufacturers recorded a 12% revenue growth for the second straight year, without including the booming arms sector in the calculation. The good news is that, with only one exception, the 40 sectoral leaders made profits in 2017 and their margins were stable at 7-8% on average.

The pharmaceutical sector was traditionally well developing. The retailers of food, white goods and electronics, clothes and furniture grew revenue by 10% on average, due both to increased consumption and the opening of new sites and weakened or disappearing competitors.

A minor rate of growth was achieved by food and beverage producers and grain traders, and in many cases the reasons were related to prices. New regulations and labor shortage shrank the growth of transport and textile companies.

There are no major shifts among the top 10 companies in Bulgaria in this year's edition of TOP100, with no change in the ranking of the holders of positions from 1 to 6. Only the vice-champion - Aurubis, is very close to the constant leader - Lukoil Neftochim. The revenue gap between them has shrunk to less than 300 million levs but with fuel prices rising rapidly we do not expect any shift in 2018.

The most notable change is that Ruse-based biofuel producer Astra Bioplant for the first time earned revenues of one billion levs and entered the top-ten group, while OMV Bulgaria left the group. If the Independent Bulgarian Energy Exchange continues to report in its turnover the electricity sold therein and having in mind that almost all electricity producers must sell their output there starting from the middle of this year, probably the IBEX will be the next one to enter the top-ten group

A notable fact is that for the first time since 2008 each of the first 10 companies in the ranking has revenues above one billion levs. Typically, there were seven or eight companies to make such an achievement in the previous rankings.

Last year's optimistic results fuel optimistic expectations for growth of GDP, employment, incomes and exports in 2018. Of 23 companies asked to predict what 2018 would be like for them, only state-owned coal miner Mini Maritsa Iztok forecasts shrinking revenue, while more than half of the respondents expect double-digit revenue growth. When it comes to the bottom line, however, their forecasts are more conservative - four companies see potential drop in profits, while NRICs expects a loss.

There are already some clouds on the horizon. The euro area countries - Bulgaria's main trading partner, already show signs of unsteady economic performance. It could reverse the cycle of economic growth in the euro area that started in 2014 and also propelled the Bulgarian economy. However, there are no expectations for a slowdown in Bulgaria, at least in the short run, and 2018 could very well beat the records set in 2017.

• The revenues of the top 100 companies rose by 14% year-on-year on average in 2017 driven by rising fuel and metal prices and expanding manufacturing plants.

• Machine building and IT companies were the most rapidly and consistently growing businesses.

For the large Bulgarian companies, 2017 was the best in the last six years in terms of revenue growth. In terms of profits, their achievements were unprecedented.