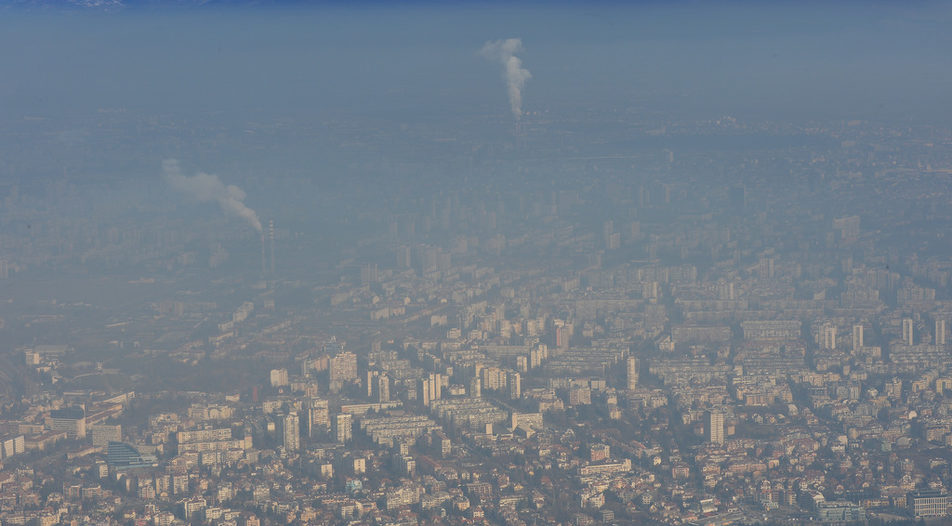 Not only is the issue serious, but the failure of the city authorities to be proactive has shown why the issue can be harder to solve when there is no political will. Finally, the economic dimensions of the issue, related to people driving old cars or having to rely on cheap, but polluting energy sources, create the main barrier for policy-makers - the danger of making voters angry.

The good news is that the country finally has a national program to tackle air quality with specific measures and investments calculated, mostly due to the World Bank's efforts. This will provide Sofia with a roadmap yet the authorities will need to be ready to ram through some tough decisions.

The nature of Sofia's smog

Sofia (and Bulgaria as a whole that is) has been making headlines with its air pollution problem in the last few years, even though pollutant concentrations have been declining overall in recent decades. Yet, the European Court of Auditors concluded in a recent report that levels of Sofia's particulate matter PM2.5 (PM2.5), i.e. finer particles that can remain for longer periods in the air and are easier to inhale, have remained virtually unchanged since 2009. Meanwhile, the population's concern has grown, and the authorities have finally started to take action.

There is widespread agreement that the main sources of air pollution problems in Sofia are domestic heating and car traffic. However, data on the contribution of each to the particulate matter in the air does not offer a definitive consensus. Depending on your perspective, the main source of air pollution in the Bulgarian capital is either domestic heating or traffic. On one hand, PM10 concentrations peak in winter when coal, wood, and, even worse, garbage is being burned for heating purposes. On the other hand, transport should not be neglected as it is an all-year-round issue. The problem with cars in Sofia, as well as Bulgaria, is that many of them are quite old and polluting.

However, using annual data (as we have done in some of the graphs as well) may not be the most accurate representation of the problem in Sofia as air pollution is seasonal. Also, sharp increases for short periods of time need to be acknowledged because they have acute health consequences, especially for vulnerable groups.

As Vision for Sofia (an organization which is doing the first in-depth study on Sofia on various topics including economics, tourism and environment) mentioned in its analysis, the average daily limit for 2016 was not exceeded only in one of the city's 13 monitoring stations - Kopitoto, located in Vitosha Mountain, above all the smog which gathers in Sofia Valley. In Nadezhda residential district, there were 40 days when the average daily concentration was higher than the legal limit of 50 mg/m3, and other stations showed even worse results, with Pavlovo having 60 days of "infringing" air quality and Druzhba - 74.

Though there is some information, air pollution remains under-chronicled in Sofia, which prevents the adoption of efficient policies to solve the problem. First of all, the sources are still not correctly evaluated. Sofia Municipality claims that 57% of particulate matter is generated by automobiles. However, the national program for decreasing air pollution explains that only 10% is due to traffic. This big discrepancy is just one of the signs of the lack of preparedness in Sofia or in Bulgaria as a whole to tackle the problem. According to Vision of Sofia, the information on emissions and air quality in Sofia Municipality is not specific enough to provide a detailed idea as to how much each pollutant contributes to the smog and how each source adds to the overall pollution.

Second, monitoring is not done with the best intentions or at least so it seems. Currently, there are 13 official monitoring stations in the capital, five of which are operated by the Regional Health Inspectorate and the rest - by the Executive Environment Agency. One was moved from a central intersection with busy traffic - Orlov Most - in 2015, because of the metro construction works nearby.

Authorities claimed that this was because it would give too high concentration values. Yet this reasoning does not sound quite logical since pollution is still there and people, pedestrians or drivers, are both exposed to it. As was mentioned in the European Court of Auditors' report, the station was the champion in recording the highest number of days of PM10 concentrations exceeding the limit, and once it was moved, the "frequency of such events measured in Sofia dropped sharply".

Furthermore, live data on air quality in Sofia is not available and is not easily accessed. Now there has been a push for more transparency, especially with the help of civil society. Some volunteers acted upon the issue and scraped data from authorities' websites so that they could provide it in an accessible format later on. AirBG, a citizen science initiative based on volunteer efforts, has over 300 monitors in the capital, and a few hundred more around the country. The measurements may be somewhat flawed, but they provide a large public platform for discussion. Environment Minister Neno Dimov offered to help assessing the equipment so that these monitoring stations could also be used for air analysis by the authorities.

When the authorities wake up

It was no surprise air-pollution - this European hot topic - finally infused Bulgarian politicians' rhetoric as well. However, it is difficult to shake off the feeling that external forces and not self-initiative provoked the authorities to speak. Maybe one of the strongest institutional pushes was the Court of the European Union's decision that Bulgaria breaches air pollution levels established in EU regulations. The Court ruled that Bulgaria had systematically been in violation of the yearly and daily limit of PM10 concentrations between 2007 and 2014, not only in Sofia, but in other parts of the country as well. The risk of a fine probably was the strongest incentive for the authorities - both at the national and local level in the capital - to start crafting policy and carefully considering alternative measures.

The citizen science project, AirBG, launched at the same time. It was a sign that people were involved in the issue and would actively be seeking the authorities' reactions with policy and investments in air quality solution. Protest rallies and media coverage somewhat increased, and Sofia had to finally look at the air it breathes.

Sofia Municipality found itself in a situation where it had to start from scratch, even though there are claims it has been working on the issue for a long time. Sofia Municipality responded to queries from Capital weekly in March 2017 about the action taken by municipal authorities to combat air pollution by citing supposedly beneficial measures like planting trees or simply creating new green areas. Of course, such measures help but they are insufficient. Some investments in less polluting public transport like trams were also mentioned.

A new administrative unit - Air, Climate and Energy appeared within the Sofia Municipality with the purpose of focusing on these issues. An information campaign intended to raise awareness also began recently.

In terms of monitoring at least, there might be some more tangible efforts: 22 new monitoring stations will be installed in the capital. Most of the measures which the authorities in Sofia, as well as other municipalities, undertake to tackle air pollution, rely on EU funding. Sofia mayor, Yordanka Fandukova, and her colleagues like to cite Sofia's metro as a key measure against air pollution - and it was paid for with European funds as well.

In an answer to a query from Capital weekly, Sofia Municipality explains that, if everything goes according to plan, by 2019 it will have replaced 90% of the city's buses. It is both trying to make public transport less polluting and more appealing to citizens. However, true measures to penalize drivers of old clunkers are rarely undertaken. The closest initiative was decreasing parking space in some central areas in the city

As for domestic heating, a pilot project has been launched with the sole purpose of replacing 30 open-fired stoves with 30 pellet stoves which release less harmful emissions. However, the impact of such a small-scale project raises eyebrows when the scale of solid fuels and firewood use in the capital is much larger.

All of these measures are just tentative steps which are not going to lead to any meaningful improvement in Sofia's air quality. A lot more should be expected from Sofia's local government to effectively tackle air pollution.

Of course, local efforts can never be enough and actions at a national level are required. For instance, the Finance Ministry has proposed heavier taxes for old, more polluting cars. Although the increase is not significant, it is at least heading in the right direction.

The use of heavily polluting fuels for domestic heating remains the biggest problem. Many argue that it is an issue of poverty as usually people who are less well-off drive old polluting cars or use stoves burning coal or firewood. Thus, it will be hard for politicians to pit themselves against their electorate.

The World Bank has proposed to replace old stoves in households, tighten control over firewood quality and stimulate the use of wood pellets. Investments in these measures and the subsidies for people can be hard to tackle and will go beyond the EU funds' capacity and purpose. So now, after there is a game plan in place, policy-makers need to do the most difficult part: actually solve the problem, regardless of what it takes.