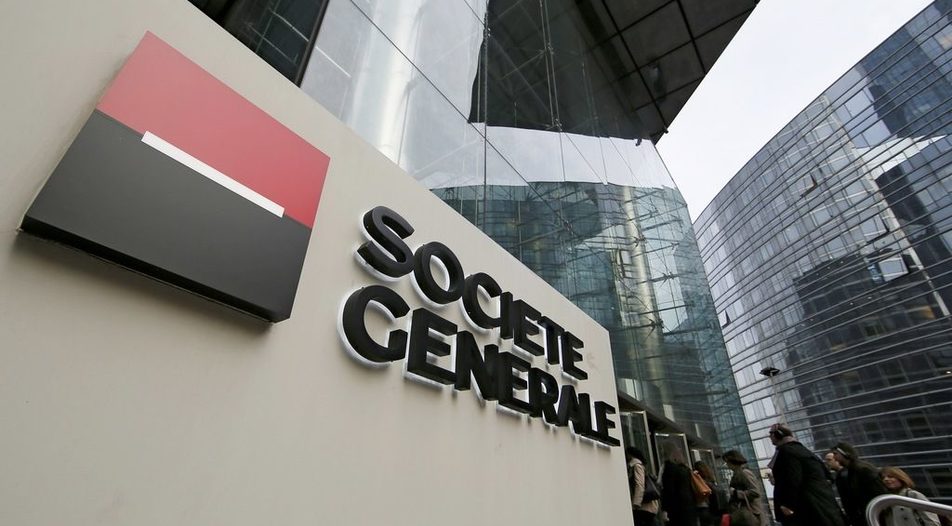 The Eastern European market turned too tight for Société Générale

France's Société Générale is set to sell its Bulgarian subsidiary Expressbank as part of a wider process of withdrawal from markets where it is not among the leaders. Eastern Europe is one of these markets.

The region held a lot of promises for growth a few years ago, but they never materialized. Now the banking sector in most of the countries in Eastern Europe is overcrowded and the promise of higher returns that existed before the global economic crisis of 2009 is gone. That is why the sector is currently being redistributed across the region. While until now the restructuring was dominated by forced sales of branches owned by banks in distress (mainly but not only from Greece), it is now in the second phase where, with the recovery of economies and the risk appetite, voluntary sales are also possible.

The state of play

There is no official information on the progress of the sales process which is run by the Paris headquarters of the bank. According to three sources of Capital Weekly, at this point Hungary's OTP Bank is conducting due diligence at Expressbank. In Bulgaria, OTP has been present since 2003 as the owner of the second-largest DSK Bank. OTP didn't answer questions of Capital regarding its interest and participation in the procedure.

The initial plan involved direct negotiations between Société Générale and OTP, but according to two sources of Capital, other potential buyers have emerged, with a fund run by US-based asset manager Apollo Global Management filing an indicative offer for Expressbank at the end of February. However, at least at this stage, the offered price is considered to be low. Apollo refused to comment.

In recent years, Apollo Global Management has been closely monitoring the region. In Bulgaria, it was one of the candidates for United Bulgarian Bank (UBB), First Investment Bank (Fibank) and was interested in the sale of the local unit of Piraeus Bank. According to another source, thee are other global investment funds looking at Expressbank sale, , but Apollo is not among them.

Final bids for Expressbank are expected to be submitted in June.

The sweetener of the package

The bank in Bulgaria is being sold in a package with five units of the French group in Eastern Europe - in Albania, Macedonia, Montenegro, Serbia and Moldova. All of them are well-run and profitable but suffer from identical constraints - small markets where the formerly enticingly high profitability is dropping, the banking environment is saturated and at the same time unstable from a political and regulatory point of view.

This is why Société Générale has taken the strategic decision to withdraw from the non-strategic markets in Eastern Europe where it is not among the top three by market share. In 2016, it sold its fully-owned Croatian subsidiary Splitska Banka to OTP Bank, and in 2017 it divested its entire stake in its Georgian subsidiary TBC Bank. The pearls in the crown remained out of the packages - the divisions in Russia, Romania and the Czech Republic.

The starting point for the price for Société Générale Expressbank can be comparable to the one achieved in the UBB deal. UBB was sold by National Bank of Greece (NBG) to Belgium's KBC for 610 million euro, which was estimated at 1.1 times its equity. That's why the expectations are for a price above the book value of Expressbank's capital, which at the end of 2017 was close to 760 million levs. The main reason is that Société Générale Expressbank has no skeletons in its closet. It is well-positioned on the market, and in the past year it has also shown visible dynamics in mortgage lending, where it achieved 25% growth in the last quarter of 2017. The bank recorded a profit of 106.7 million levs in 2017. Besides, the bank has a developed branch network and traditions in corporate lending in Bulgaria.

According to estimates of bankers approached by Capital, the price could be even higher if Société Générale Expressbank is sold alone since the Bulgarian subsidiary is probably the sweetener in the bundle of banks.

For OTP, the acquisition of Société Générale Expressbank would support the growth of its share in corporate lending in Bulgaria. In retail banking, DSK Bank is a leader with a well-developed business and a recognizable name from its historical past as State Savings Bank. Upon merger of Société Générale Expressbank and DSK Bank, the new entity will not surpass the leader in the sector in terms of assets - Unicredit Bulbank, but will come closer to a similar share of nearly 20% share. If OTP also adds Piraeus Bank Bulgaria to its assets (there are rumors that OTP is interested in it as well), then the new bank would become leader in the sector.

OTP, through DSK, is solidifying its image of a player in the Bulgarian banking sector seeking aggressive expansion through acquisitions. In the autumn of last year, the Hungarian market leader announced its readiness for new purchases in the region, from Bulgaria to Belarus. For this expansion, OTP is prepared to invest one billion USD by buying at least five banks in Central and Eastern Europe in two years, its chief executive officer and largest shareholder, Sándor Csányi, revealed in an interview with Bloomberg.

Accordingly, DSK Bank, which OTP acquired in 2003 in a privatization procedure, is mentioned as an interested party in almost every transaction on the Bulgarian banking market. When Germany's MKB had to sell its Unionbank in 2013, DSK Bank made a move but in the end the bank was bought by Fibank for 24 million euro. Subsequently, with the withdrawal of Greek banks due to commitments made to the European Commission in exchange for bailout programs, DSK was expected to pursue new deals. It was bidding for UBB until the very end but it was defeated by KBC. At various times OTP was unofficially mentioned in the banking sector as a possible buyer of Piraeus Bank whose Greek owner announced last June that it was selling the bank's divisions in the region. In the current procedure for the sale of Piraeus Bank Bulgaria with its three billion levs in assets, OTP is again among the candidates mentioned. No doubt, Société Générale Expressbank which is more than two times larger, is a more appetizing bite.

Even with the funding provided, however, OTP's expansion has not been seamless. In May 2017, OTP acquired Croatia's Splitska banka, then in July it signed an agreement with NBG to buy Romania's Banca Romaneasca, and on August 4 it finalized a deal with NBG for the purchase of Vojvodjanska Banka in Serbia. The acquisition in Romania, however, could not be finalized and the deal failed because of the Romanian central bank's refusal to grant permission. No reasons were given, but speculation in Romania pointed to an unofficial policy of the Romanian central bank to prevent Russian influence in the sector. An example is how in 2012 Sberbank acquired the entire Austrian Volksbank without its Romanian subsidiary, although it was among the most important ones in the group at the time. The second largest shareholder in OTP and a board member is Russian businessman Megdet Rahimkulov, who also has a Hungarian citizenship. Forbes estimates his wealth at $1.9 billion, which exceeds the fortune of the richest Hungarian, OTP's chief executive officer Sándor Csányi ($1.1 billion). OTP also wanted to acquire the Montenegro-based unit of Société Générale but it was prevented by the regulators, probably on the same grounds.

For a possible deal in Bulgaria, OTP's regulatory woes in Romania do not seem relevant. From a supervisory point of view, the acquisition of a bank by an already operating owner on the local market is a preferred option, since it contributes to the consolidation in the sector while the entry of a new player has no added value.

What was the major event in Bulgarian financial sector lately?

2018 is bringing significant news for the industry, namely Mifid II/Mifir, IFRS9, GDPR and PSD2. However, I would rather highlight the ongoing major developments - not only for finances, but for the economy as a whole - digitization. At UniCredit we view it as an enabler and driver rather than a standalone activity. The aim of our digital transformation is to enhance efficiency and, most importantly, to improve the experience of our customers, meeting their changing needs. Bulgaria is playing an important role in this field, according to UniCredit's research within CEE, the country is thriving when it comes to fintech companies. After Russia and Turkey, Bulgaria is the country with the biggest number of fintech companies, and they mostly act as idea generators/drivers for the established banks.

What do you expect is the next major development in Bulgarian financial sector in the forthcoming quarter?

Since September 2016 Enrico Minniti is a general manager and deputy chairman of the Management board of UniCredit Bulbank. He started his career in Credito Italiano in 1997 and later worked for UBM, Bank Austria, Ukrsotsbank (all of which in the UniCredit group). In March 2015, Enrico Minniti became Head of CEE CIB and contributed to the development of the business in the region.

Apollo Global Management is not absolutely unknown to the Bulgarian market - it was one of the candidates for UBB, it agreed the purchase of a portfolio of bad corporate loans from Postbank for 17 million euro (the transaction is yet to be finalized). It has also looked at the Balkan business of the withdrawing Telenor, was willing to acquire Piraeus Bank Bulgaria, and also looked at Fibank.

The main question before OTP should be to what extent its competitors are motivated to buy the Société Générale package. Apollo and a few other players of the same type look quite hungry for entering the European banking market. At the end of February, the sale of Germany's troubled state-owned HSH Nordbank for 1 billion euro was finalized.

Apollo was a viable candidate to buy the former leader in lending to the shipping industry until the very end but ultimately a consortium led by JC Flowers and Cerberus was preferred. The same players were also looking at troubled small Italian banks but no deals were made after the state circumvented the rules and bailed them out.

So far, Apollo's main success has been in Slovenia, where it acquired Nova Kreditna Banka Maribor in 2015 in partnership with the EBRD for 250 million euro. Recently, Apollo failed to purchase another Slovenian lender, Gorenjska Banka, but it seems that it has an appetite for deals.

Apollo and the like come closer to the profile of distressed funds. They are looking to acquire undervalued banks which, in the medium term, they could heal and then dispose of, mostly by listing them on the stock exchange. Société Générale's business in Eastern Europe does not fall into this category, and if a strategic investor shows interest, it is likely that investor is willing to pay a better price.

In addition, investors like Apollo are traditionally perceived as suspicious by politicians and regulators, particularly if they are targeting a larger or systemically important bank, where redundancy and optimization experiments can have a serious impact. Yet, despite all question marks, the presence of more investors interested in Société Générale's business is a good sign.
• Société Générale is withdrawing from markets where it is not among the leaders